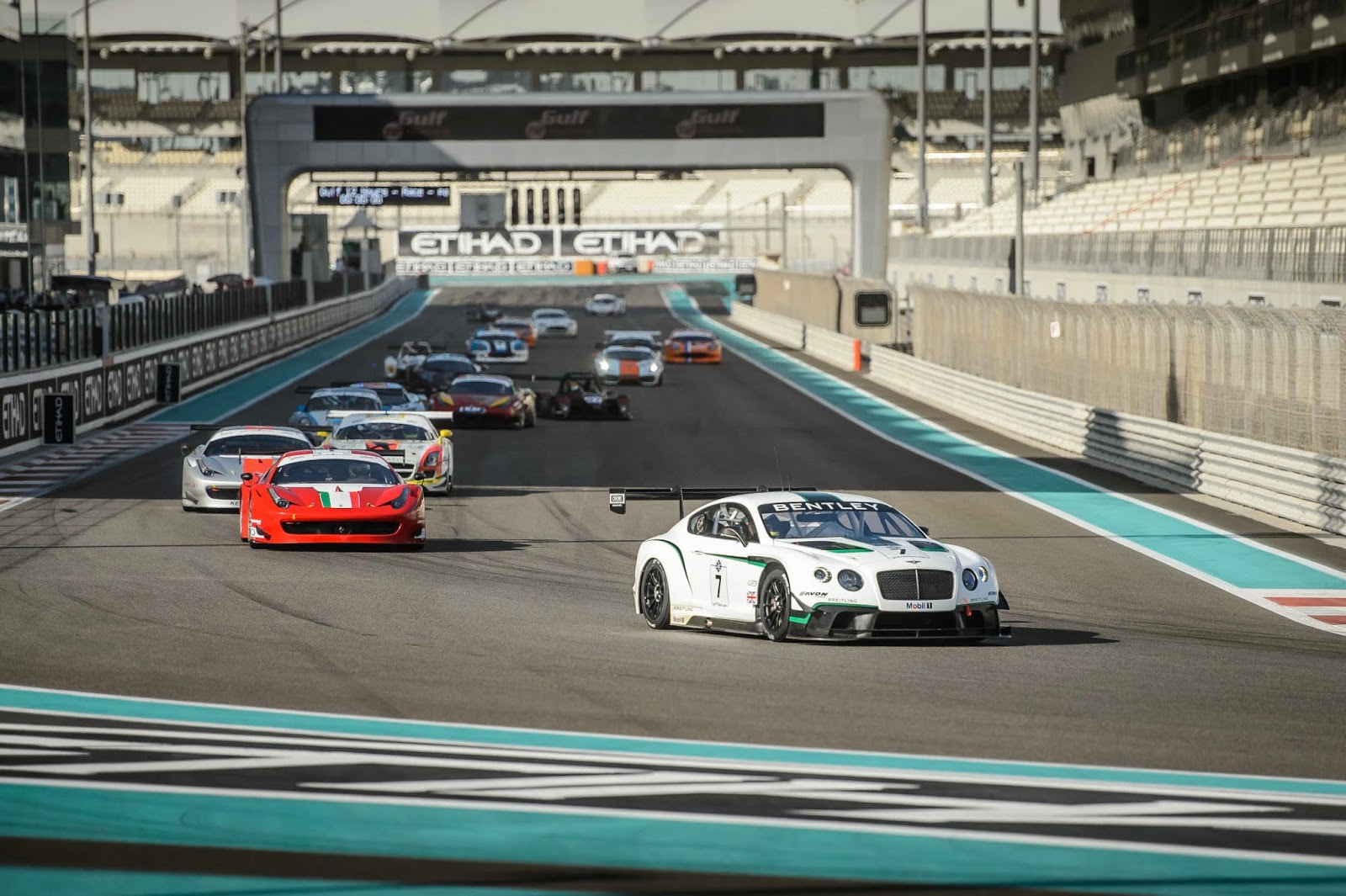 After completing the first six hour session of the race in third position, the second half of the race saw the team maintain that position until the final two hours, when a close fight with the Ferrari 458 GT3 of Kessel Racing was ultimately won by the more established car. The closing minutes were not without drama, with apparent damage to the underfloor, meaning a cruise to the finish line to bring the car home.
Bentley’s Director of Motorsport, Brian Gush, comments: “In running an all-new car for the first time, our main goal today was to finish the race and be consistent. We’ve achieved this, and then to finish fourth in a race with such established competition is extremely encouraging. We leave Abu Dhabi with confidence that we will have a reliable and competitive package for 2014, when the hard work really starts.” 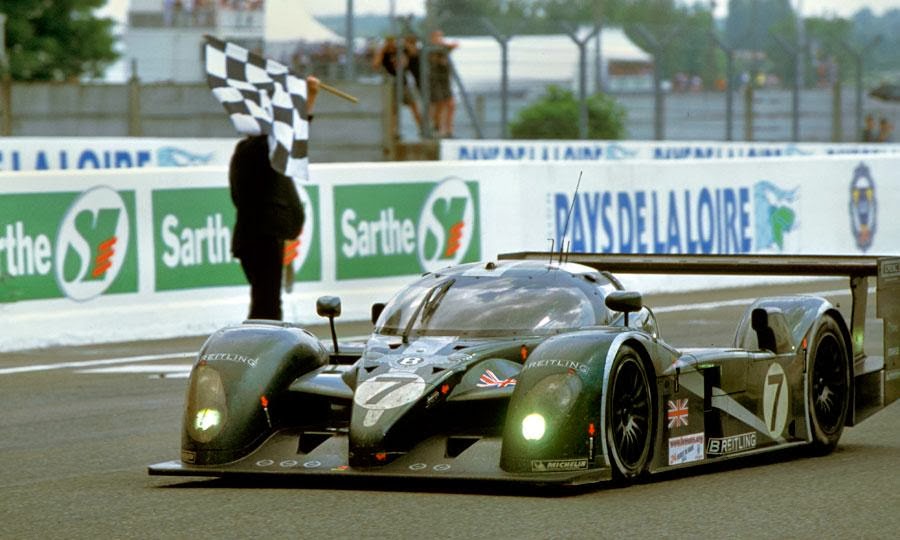 Bentley’s success at Le Mans in 2003 was a great victory for the company - which had dominated the endurance classic in the 1930s. The company did the right thing to call it quits in 2003, and not contemplate campaigning a production-based car until the funding and commitment were absolute. This is the only way to race successfully in full public view.


Brian Gush, an old friend, is an eminently-qualified and prudent engineer and the  result of this shakedown race says as much about his team management as anything else related to the result. Go Brian! Go Bentley!
Posted by John Crawford at 8:59 AM 1 comment:

This decision by GM to exit manufacturing in Australia should come as no surprise - to anyone. By the way, in regard to the fallout from the decision, there is plenty of blame to go around - GM, the unions, the workers and the various governments. They’ve all contributed impressively to the eventuality.

The unions bled the company; the company acquiesced; and the stupid governments (both Liberal and Labor) didn’t insist on higher productivity, they just doled out taxpayer dollars and hoped it would fix the problem.

So, with no-one doing anything about the structural reasons for the decline in manufacturing cars in Australia, is it any wonder we’ve ended up where we are. Will Toyota withdraw? Of course it will.

It is simply too expensive to manufacture cars in Australia. We are a sophisticated society that demands high living standards, and the high wages that pay for them. If productivity doesn’t match the wages demanded, then that industry is unsustainable - simple as that.

Productivity and efficiency is the simple formula which all companies, governments and workers must look to, to make business sustainable and profitable. Profit is NOT a dirty word, it’s ESSENTIAL.

Labor governments abhor productivity inquests, because they are enslaved to the unions and are simply required to support higher wage claims.

Liberal governments don’t like productivity inquests either because they inform the harsh reality of output matching costs, and that means a fight with the unions.

Interestingly in the entire history of the Australian automotive industry from 1948, in my opinion, only four politicians have ever truly understood, and tried to relate, productivity and efficiency to wages - and they were ALL Labor identities.

John Button, Paul Keating, Bill Kelty and Simon Crean. Button and Keating were far sighted statesmen-visionaries who were realistic about what needed to happen to make Australia competitive; and the two union-related men (Kelty and Crean) were realistic enough to know that you can’t have higher wage claims without increased productivity and efficiency.

As far as I’m concerned, no-one else has made any significant effort to realise the dream of blending the needs of industry/community/government to make our car industry sustainable and profitable.

Of course, I’ll be guilty of fabulous hindsight, but I have been saying (at least for the last 15 years), that car companies needed to be creating very flexible plans for the future, because doing the same old, same old had a very limited tenure.

By the time you add up environmental considerations, agitation from green groups, rising fuel costs, congested cities and roads, lack of infrastructure spending and inflation-boosted car ownership costs, then BIG cars were on life-support, and smaller cars and alternative fuels would be the only direction the market was going to follow.

I’m sorry for all the people at Ford and Holden; and the associated supplier support companies who are going to lose their jobs, but with a bit of clear thinking, re-structuring the Australian industrial landscape is not impossible, and it just may be possible to avoid long term unemployment on a scale not seen in Australia - ever!

Clear thinking? Don’t look to our politicians to provide it. The current lot (led by Tony Abbott and Bill Shorten) will just knee-jerk their way through the immediate future, without any real vision or answers.


Could we initiate a Think Tank including Paul Keating, Bill Kelty, Simon Crean , Martin Ferguson and Malcolm Turnbull to put their heads together and lead a restructuring solution? I wish!
Posted by John Crawford at 11:02 AM 1 comment:

At Morgan, it's all downhill ! 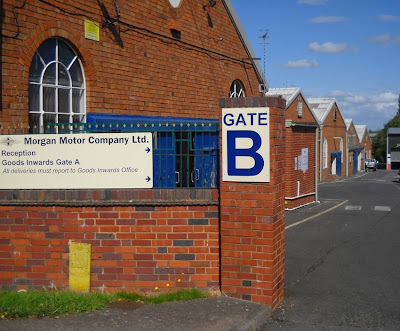 First up, letʼs get one thing straight - the title of this story refers to the slope of the site of the ‘works’, not the fortunes of the Morgan Motor Company, which are, thankfully, rising.

The Company will sell just over 1200 cars in 2013 - a record for the small, auto atelier based in the beautiful Malvern Hills in the south west of England. Its hand-built cars are treasured by their owners, many remaining in the same family after the owners’ death. Even now, the waiting time for a Morgan still hovers around a year from ordering! 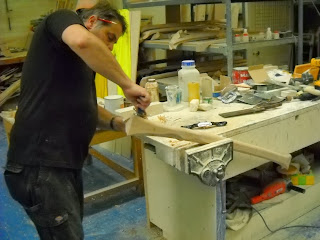 Until recently, Charles Morgan, grandson of the founder Henry Frederick Stanley Morgan, presided over the production of the car worldʼs most contemporary anachronism. Thanks in part to a lack of ʻprogressive modernismʼ. 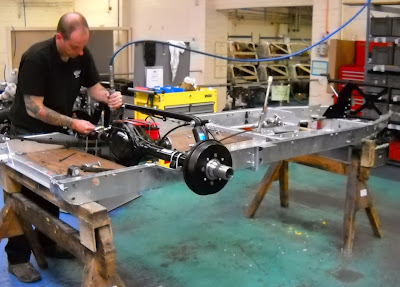 This could have been at the heart of a recent management decision to remove Charles as head of the company. Now bound up in a Group, called Morgan Technologies, which was incorporated in 2010, Morgan Cars is increasing its rate of production - a decision bitterly opposed by Charles. 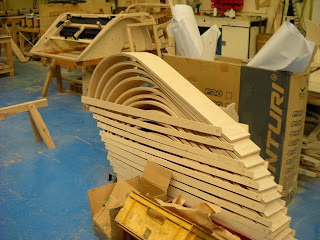 The new Managing Director, Steve Woods, who together with Charles Morgan was, from 2003-2010, part of a ‘management team’ , says Morgan needs to take advantage of new developments, cut the waiting time for a car and improve profits. This suggests that Charles Morgan, like his father Peter before him, and the founder, Henry Morgan felt that the ‘old way’ of doing things was just fine.


The company was founded by HFS Morgan in 1909 and  its first model was a three-wheeler, designed and built around a tax structure for motor vehicles which favoured less than four wheels, thus not competing with four-wheeled, horse-drawn carriages, which were still popular in the early 1900s. 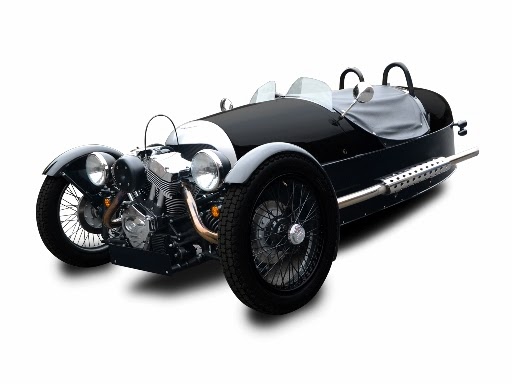 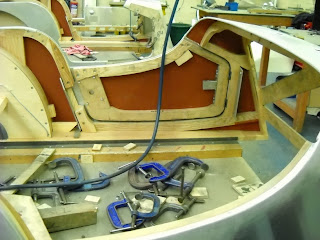 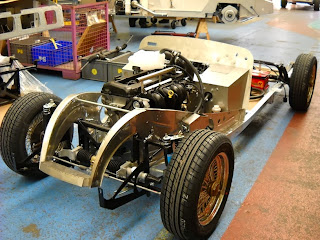 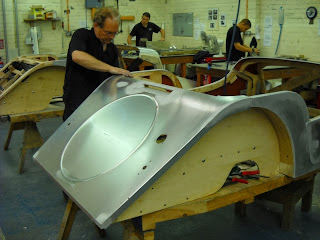 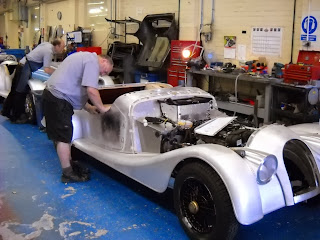 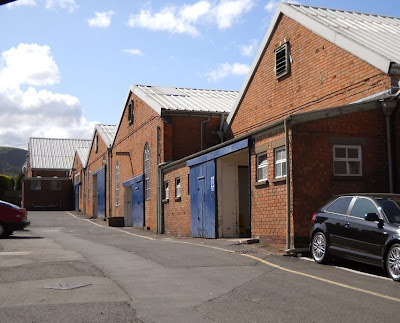 Today Morgan Cars employs around 170 people. Virtually all of them craftsmen and women, who toil over hand-made cars like no other factory in the world today.
Yet, despite the age old car-making traditions; the quaint assembly line process; and the smell of sawn ash timber, the Morgan Motor Company is as modern as it needs to be. 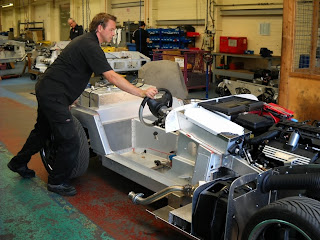 Although the waiting list for a car might be 1-2 years, the product will be the result of a company which has achieved ISO 9001 quality certification, so it’s definitely modernized many of its processes. 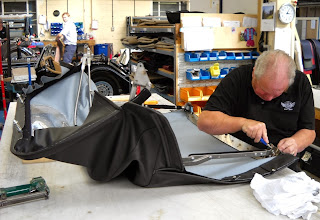 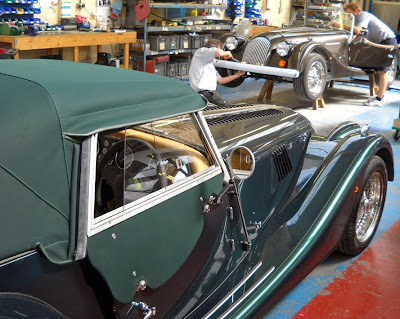 In 2007 just 640 cars flowed from the antiquated production process, where the ‘build’ begins in a large garage at the top of the hill, and as the vehicle reaches a particular stage in the manufacturing process, it is moved down the hill, to the next building. 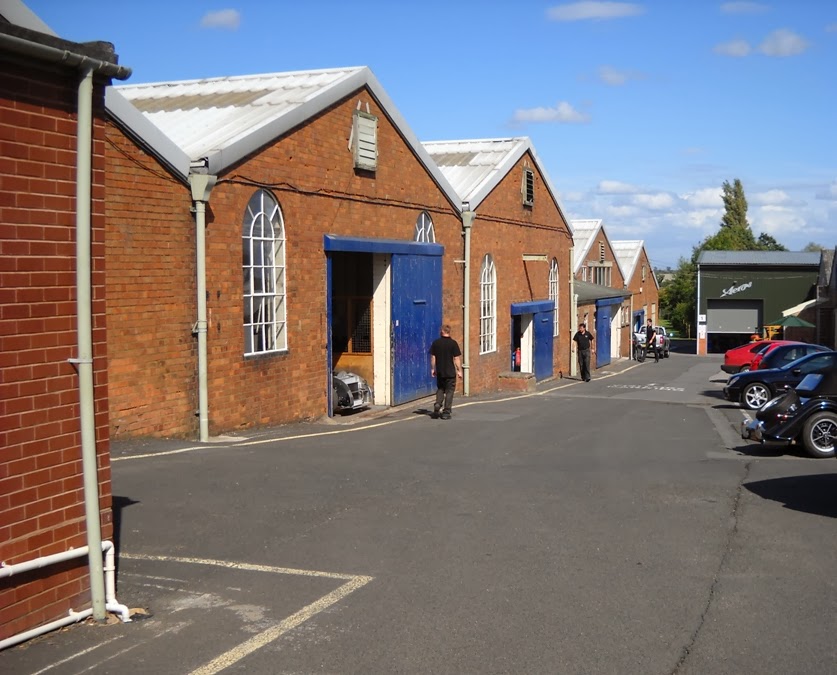 The five buildings, descend the hill, to where the trim shop, and the new ‘final finish’ area awaits the cars. 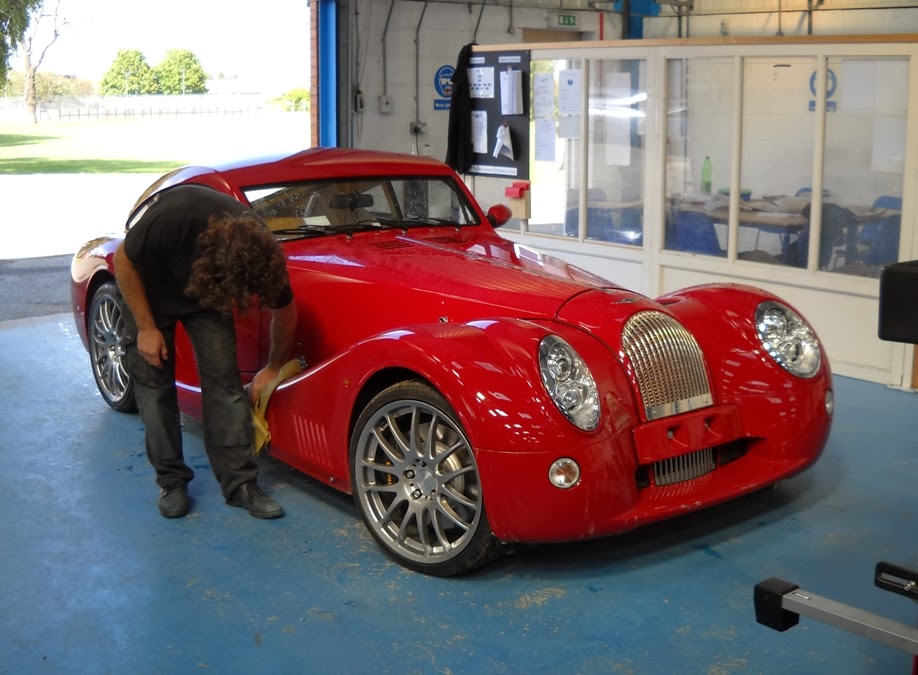 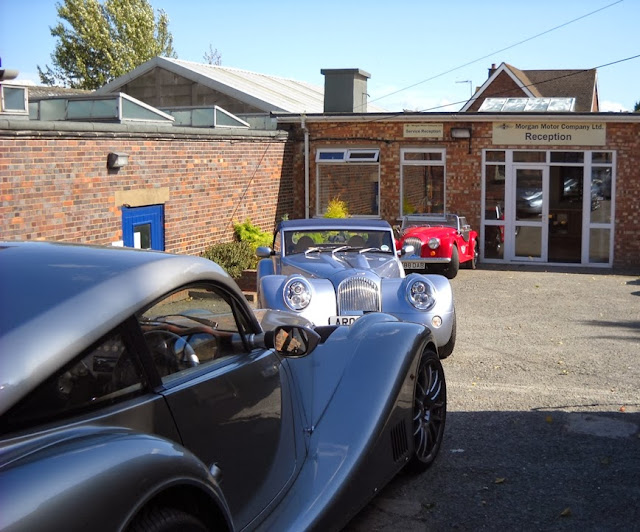 A tour of the factory (which can be pre-arranged) is an eye-opener, because what looks like a period movie set surprises with many innovative manufacturing ideas lurking behind the apparently old-fashioned car-building methods. 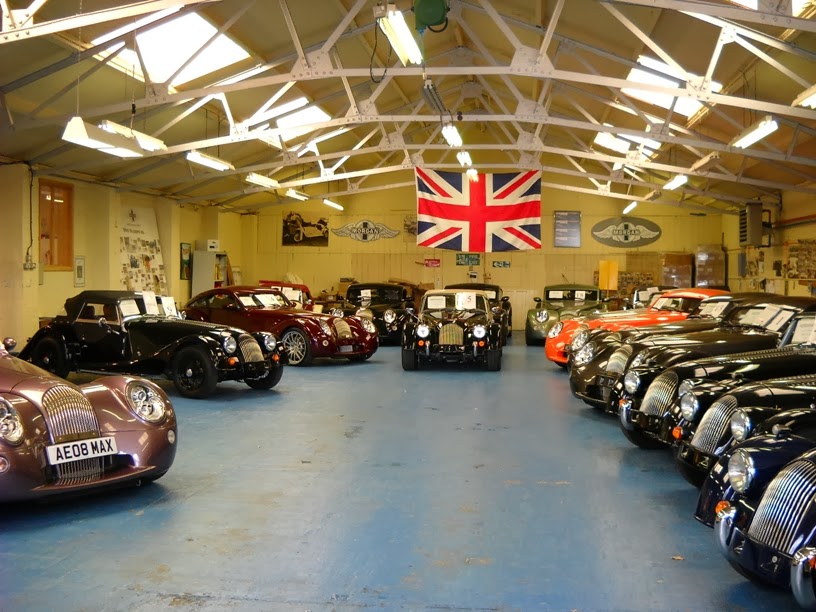 The integrity of the structure, and tolerances are impressively tight for a hand-assembled product; the paint job is exceptional and the care and attention to detail of the assembly is enough to convince any would-be buyer that this is a car which has been lovingly put together, just for them.


The workers are a jolly lot, and the vibe in the ‘works’ is positive, confident and calm. Maybe that’s the secret - just like happy, contented free-range hens going about the business of laying eggs. 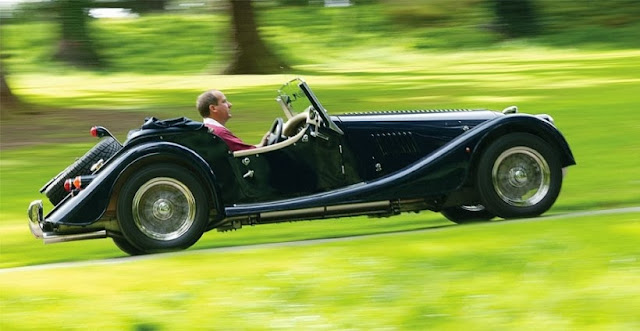 Does that make a Morgan as satisfying as a well-fed egg? Who knows, but anyone who has owned a Morgan will tell you there’s nothing like the exhilaration of driving one!
Enough said. 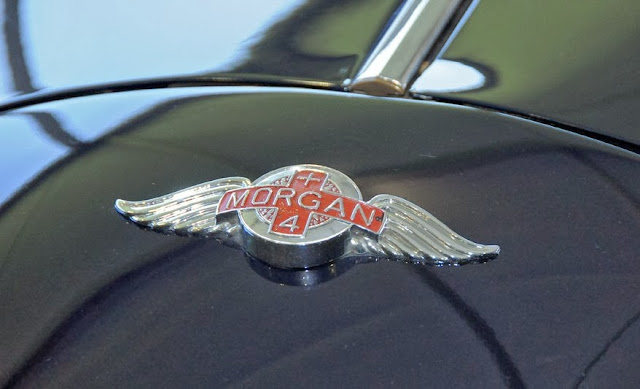 Posted by John Crawford at 9:52 AM No comments: