SO, WHAT EXACTLY IS MQB?

MQB is a system, a process, an engineering light bulb moment, and a brilliant success for the Volkswagen Group (VWAG). 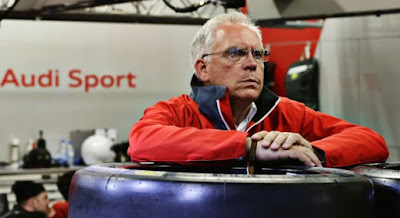 Inspired and created by my good friend Ing. Dr. Ulrich Hackenberg, MQB came along at a time when VWAG was struggling with a multiplicity of platforms, floorpans, powertrains, market pressures and escalating costs to satisfy all the needs of its various divisions.

The volume car divisions needed a breakthrough to contain costs, create efficiencies and to produce a variety of models from a smaller product base. When you consider that VWAG produces a huge variety of VWs, Audis, SEATs and Skodas, then you begin to understand the pressure on costs and efficiencies.

I once incurred the wrath of Dr. Ulrich Bez when he was leading Aston Martin from darkness to light, by describing AM's unique VH platform strategy as an 'arrangement of aluminium boxes'!

That is, you just arranged the components (or boxes) in whatever complement you needed to produce a certain size car. If it can work for Aston Martin, then it would certainly work for VWAG.

Ulrich Hackenberg made sure it did.

This post contains a number of graphic illustrations of the idea, and to the extent that they are pretty easy to follow, you will better understand what MQB is, and how it delivers lower costs, greater efficiencies and oodles of choices. 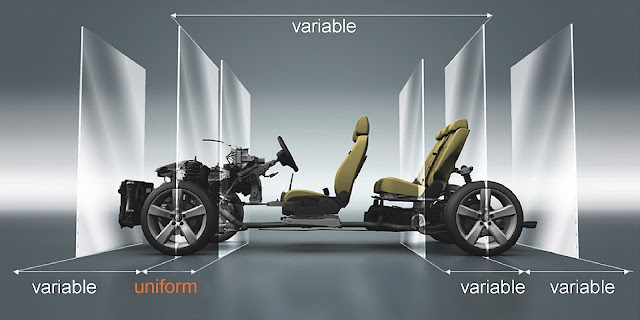 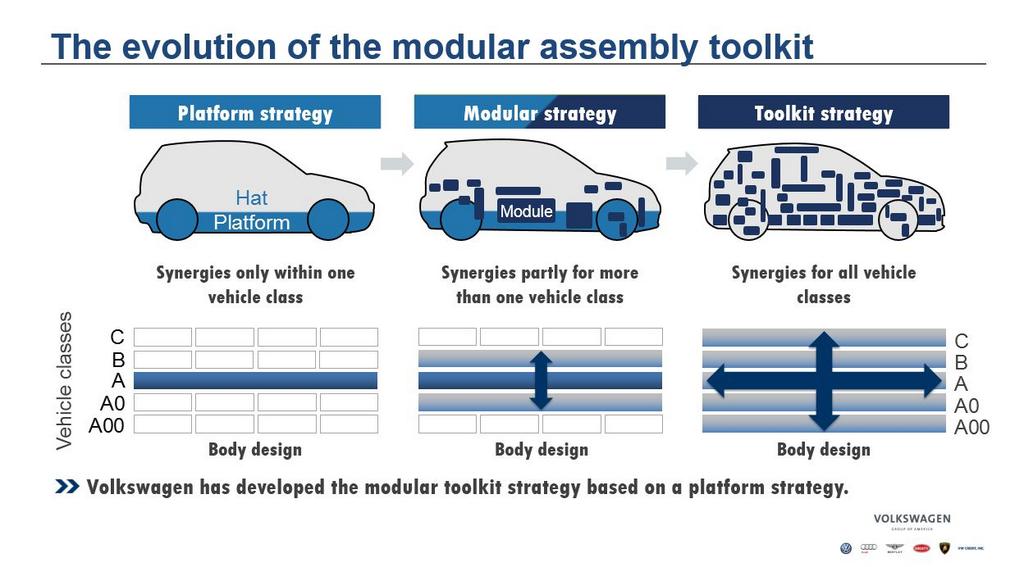 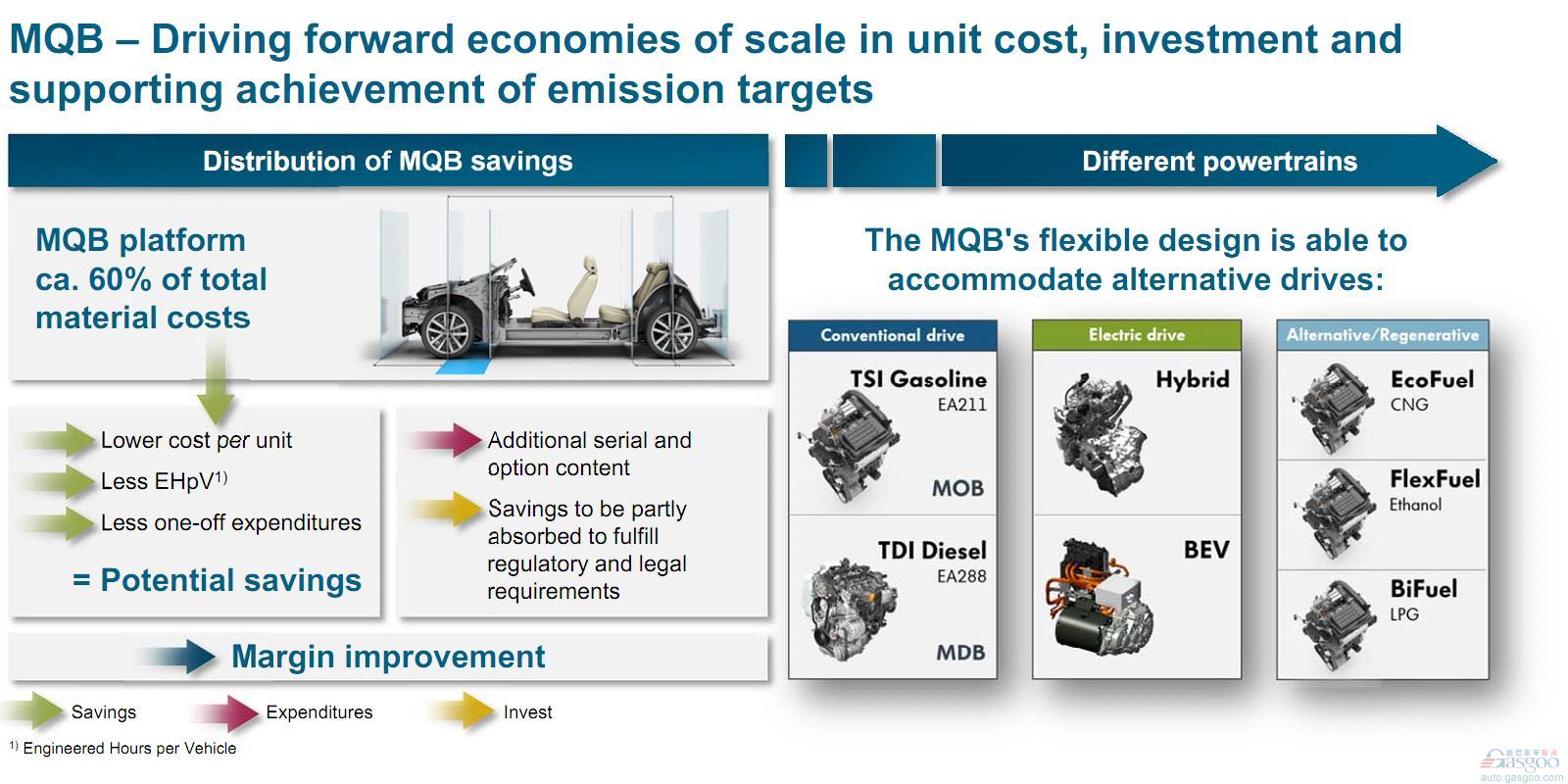 Volkswagen is certainly not alone in developing modular strategies, but given the diversity of its brands and model ranges, it has been a very effective solution for spreading the contents of the Group parts bin around its world.

MQB (for transverse applications) and MQL (for longitudinal applications) is a great success, and gives freedom to both designers and engineers which was previously unattainable. 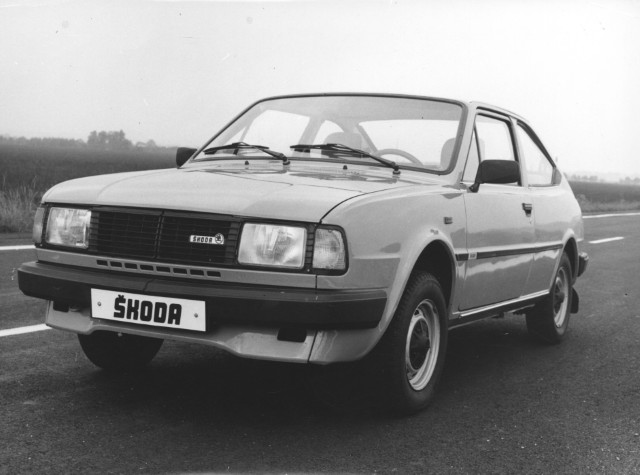 Skoda suffered many reputation misfires throughout the 70s and 80s thanks to poor management of the company after the Communist takeover of Czechoslovakia in the wake of World War II. 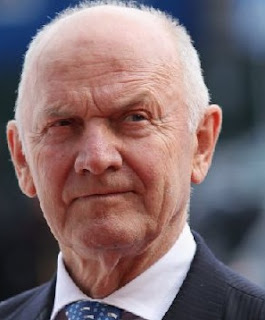 However by 1992 an Austrian with an eye for an opportunity, Dr. Ferdinand Piech, agreed VWAG would take a majority share in the 120-year-old company.

Since then Skoda has moved from being a ‘cheaper’ version of a VW to a prime example of technology transfer leading to rapid product improvement, and rapid sales growth. The year prior to Volkswagen’s takeover, Skoda produced just 172, 000 cars.
Last year, Skoda produced 1, 037, 000.

The mainstay of the range is the Octavia hatch. 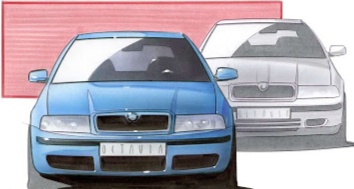 The original VW-inspired model was designed by Belgian Dirk van Braekel, who was personally appointed Skoda’s Chief Designer by Ferdinand Piech. Dirk later went on to inspire the design of the Bentley Continental GT. 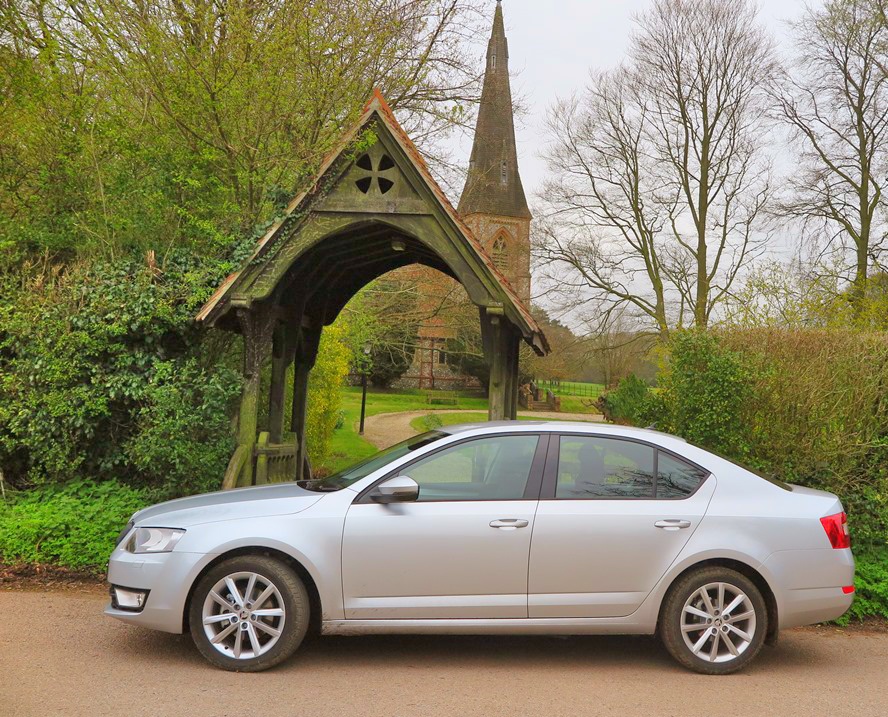 Today, the Octavia, although based loosely on the VW Golf platform, is the biggest selling model in the Skoda lineup.

Today’s Octavia, built on the new modular MQB platform, is one of the roomiest cars in the Volkswagen stable. When you first view the car it’s almost impossible to believe it uses Golf underpinnings – but that’s the genius of the MQB architecture – developed by my good friend Ing. Dr. Ulrich Hackenberg.
MQB can be utilized in any flexible way the designer decides. It’s a bit like an ‘arrangement’ of modules (or boxes). 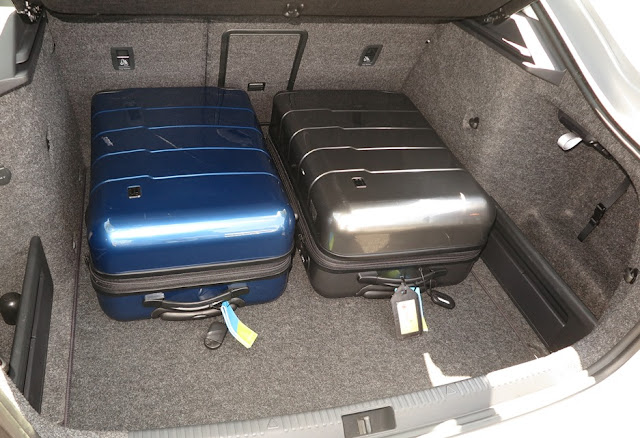 Octavia's most impressive features are its huge trunk, and a very roomy interior. Rear seat legroom has to be seen to be believed. 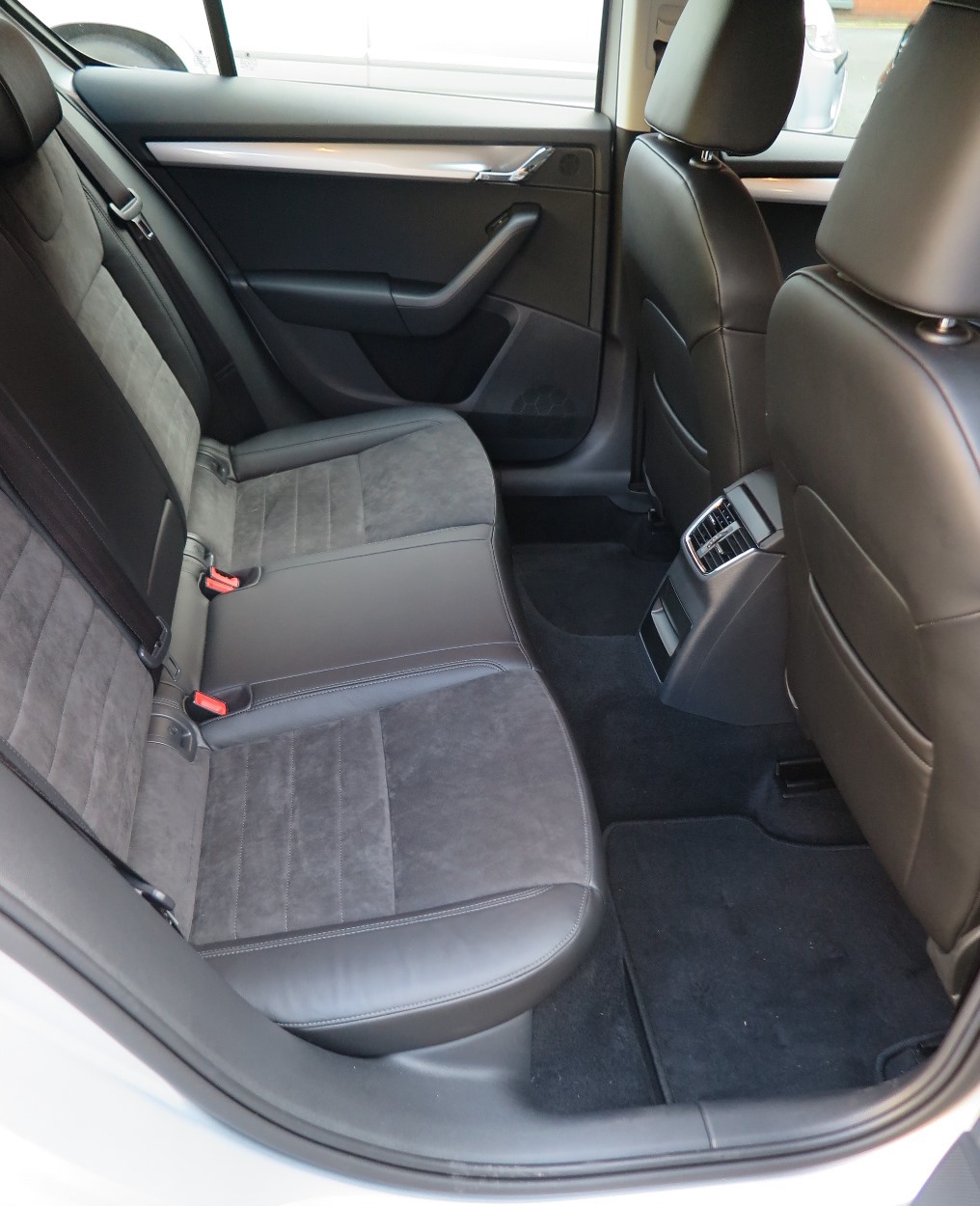 In the UK, Octavia is 14% of Skoda sales, with healthy volumes for the Yeti SUV, Skoda Rapid, Fabia small car and AWD Octavia Scout. 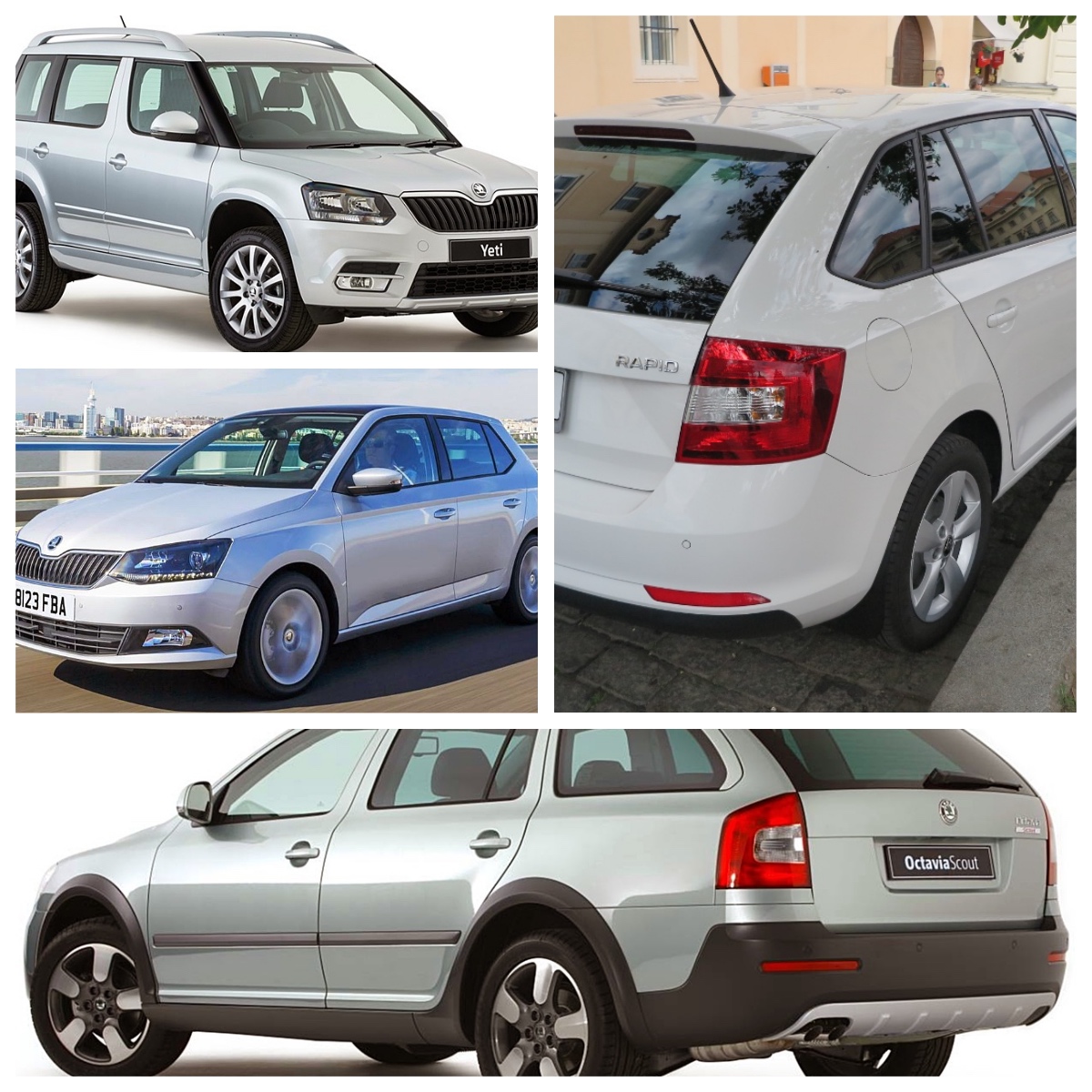 There is no doubt Skoda is hitting a button in terms of value, in the UK and wider European markets. However, to see blanket coverage of a market you need to travel to the Czech Republic. Skodas completely dominate the home market, which should be no surprise.

In the former Czechoslovakia, well prior to VWAG’s involvement Skoda had enjoyed a reputation for  value, with many automotive engineers praising the engineering integrity of its 1.3L engine, which pretty much powered every car in its range. 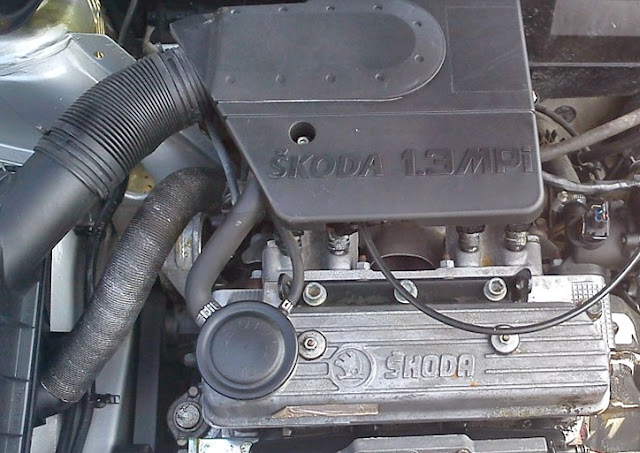 It was an example of precision design and manufacture, and was extremely robust. However while the engine was impressive, under Communist control the assembly quality of the cars, and thus the reliability suffered badly.

The company was started in 1895 when Laurin & Clement manufactured bicycles; in 1899 they produced their first motorcycles, but by 1905 they introduced their first car, the Type A. Following World War I they began producing trucks, but ran into financial difficulties, so in 1925 the company was taken over by Skoda Works, which was by then a huge manufacturer of armaments and the largest industrial company in the kingdom of Bohemia (now Czech Republic).

In 1933 Skoda launched a new range of cars, gradually refining the designs along the lines of its competitor, Tatra. However, by 1936 Skoda had overtaken Praga and Tatra to become the market leader.

During WW2, the Skoda Auto factories, which had been producing armaments and war equipment under the control of Hermann Goering, were completely flattened. By 1945, the entire factory was rebuilt, but by then the Russians were control. 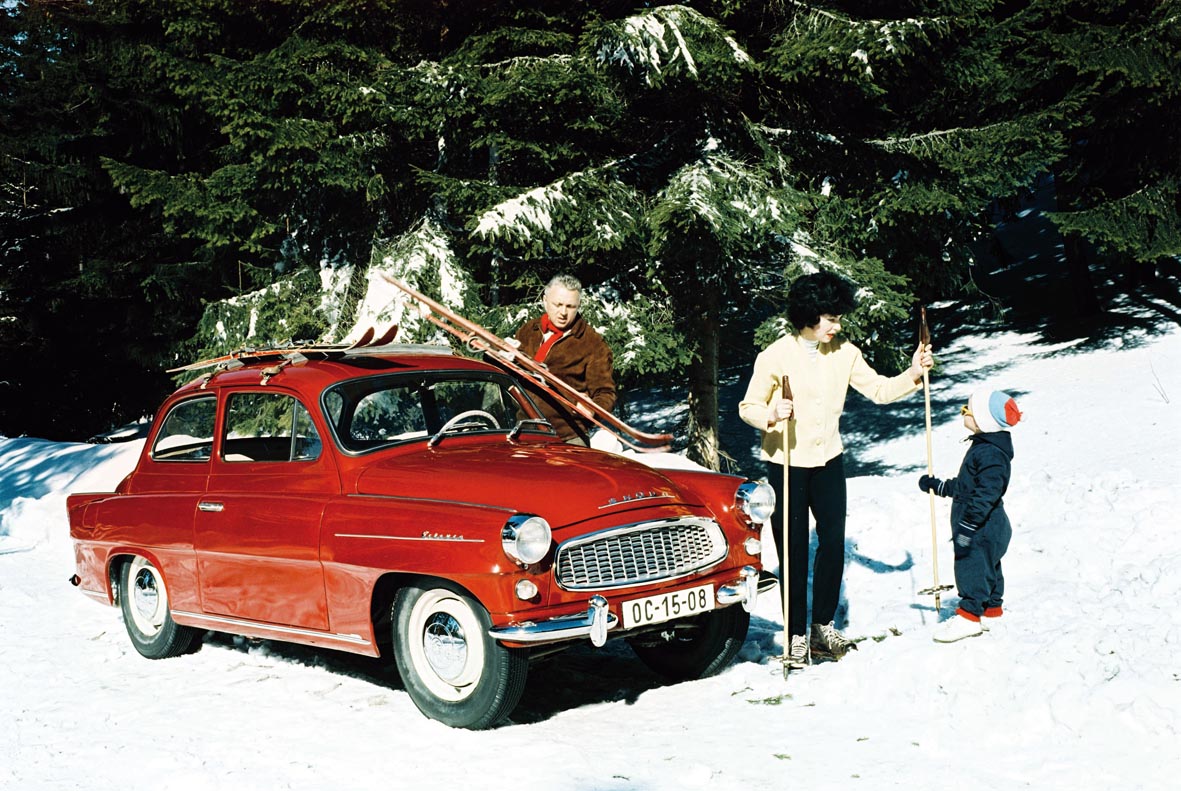 Skoda Auto produced a couple of interesting models in the post-War years, but as many owners found out, the build quality and reliability was totally woeful.

A bright spot occurred in the mid-1970s when Skoda participated in the RAC Rally and other major rallies with the 130 RS.

The rally cars were very reliable, and competitive enough to win their class in the RAC Rally for 17 years running.
Keep in mind those cars were completely rebuilt by a dedicated competitions operation.

Despite their poor reputation between 1945 and 1991, Skoda cars are credited with being one of the oldest established marques in Europe, alongside Mercedes-Benz, Opel and Peugeot.

In Prague, despite the popularity of the Octavia for private use, the most visible car in the city is the Superb sedan. It is widely used both as airport limos, and taxis. 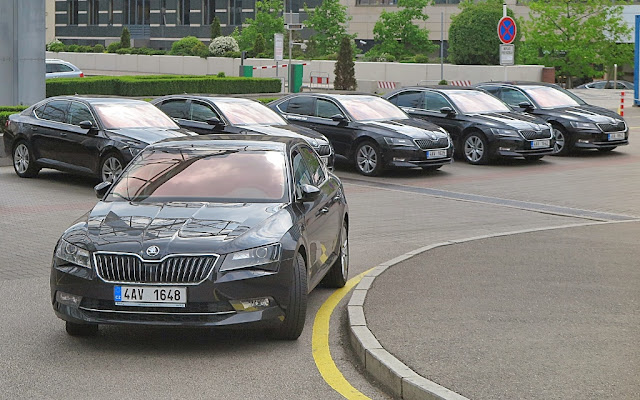 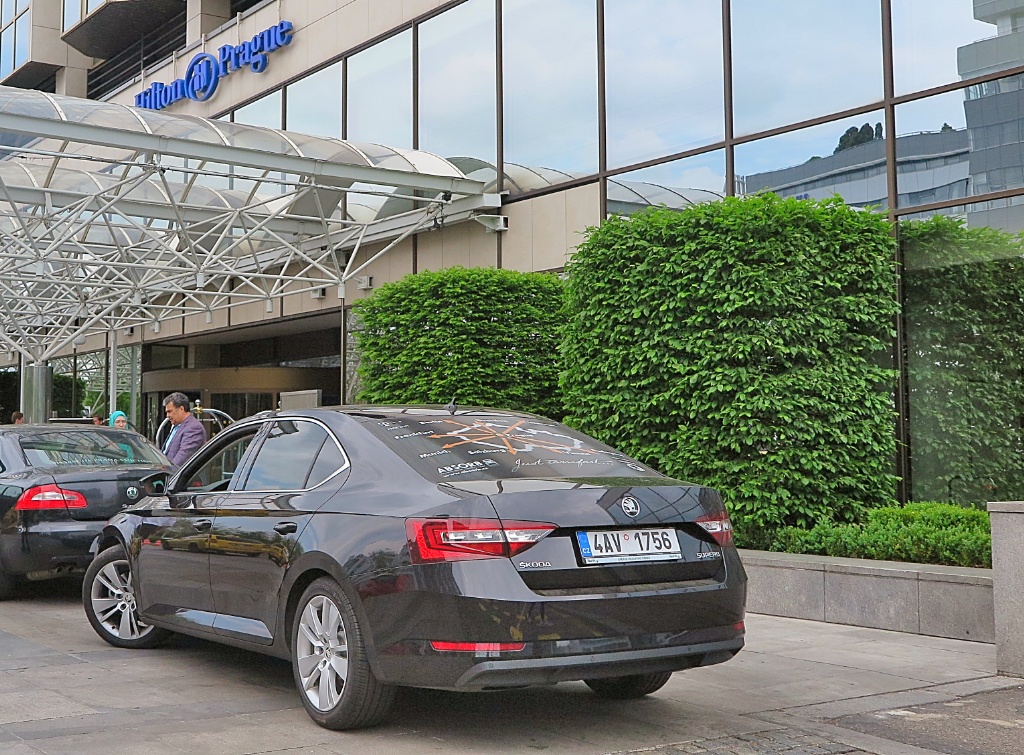 Once again the MQB system has endowed the Superb with a relatively vast rear compartment and a huge trunk. Easy to see why it’s the first choice for airport limos. 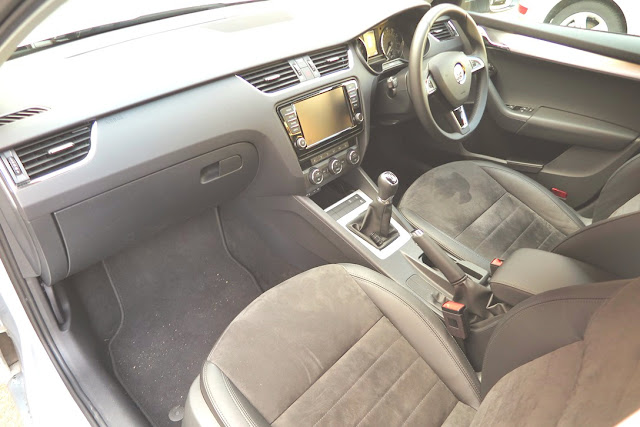 Inside the Skoda range it’s easy to spot the functional equipment which comes from VW’s parts bin, but the material quality and the fit and finish is superb, as is the functionality of the components. The SatNav system is really easy to use, as is the Bluetooth function for mobile phones and entertainment.

On the road, the Octavia proved slightly less agile than its Golf counterpart. The handling could not be described as sporty, rather, ponderous and predictable. My test car ran 225x17 tyres, on 17in. alloy wheels, giving a firm but compliant ride rather than sporty behavior. 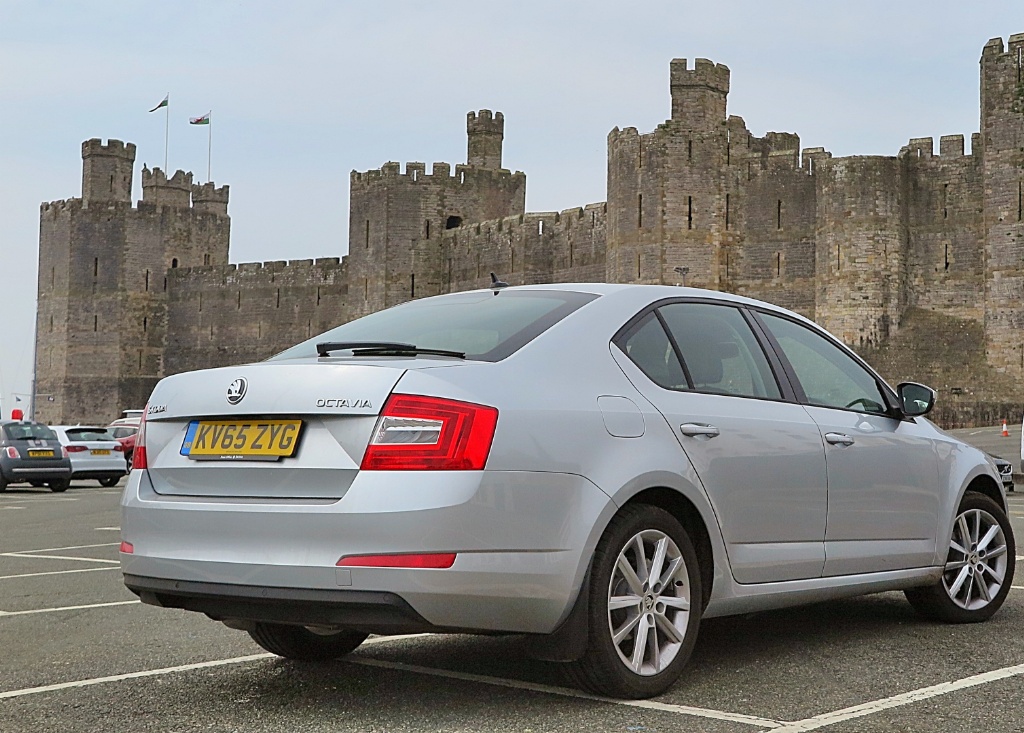 The one single downside in my opinion is the combination of the test car’s six-speed manual and the now ubiquitous Stop-Start system. In this example it was a pain in the bum. The very next act after starting the car, was to immediately turn the Stop-Start system off. It’s no worse than any other car which offers this system, but during my time in Britain in the Octavia it was a constant irritant. 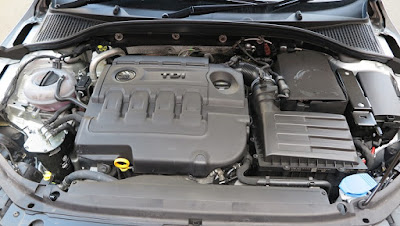 Fuel economy for the 2.0 L TDi was another outstanding feature. Over 750 miles (1200 km) of incredibly varied driving conditions, the Octavia returned 5.4L/100km. 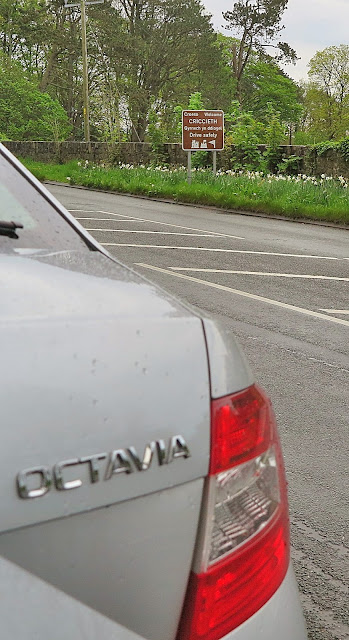 We cruised motorways at the maximum possible speed, scooted down narrow country lanes, climbed through the Welsh mountains, and crept interminably forward through the many traffic jams in some of Britain’s smallest villages.

As an 'enthusiast driver', the Octavia is not a car I would choose. But, as a sensible, practical and reliable family car it’s superb. Buy it when the kids are babies and I suggest you’ll probably still be enjoying it when they’re teenagers.

As for Skoda division, I think this VW subsidiary is just going to grow from strength to strength. 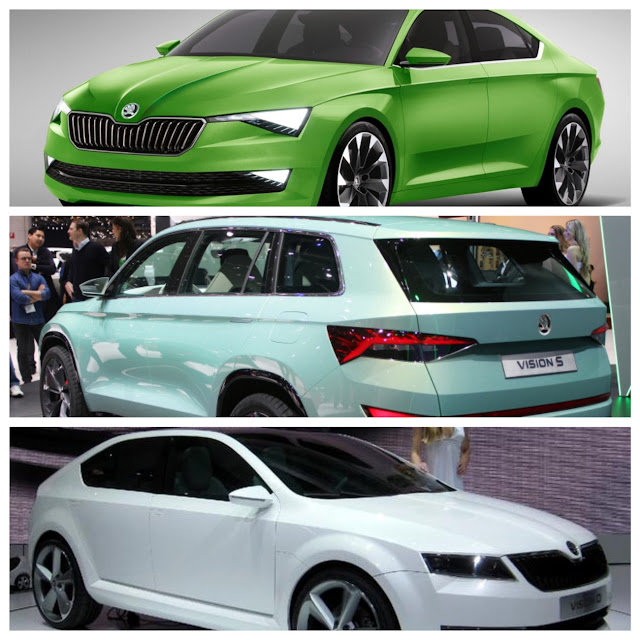 Some of the recent concept cars shown in Geneva – the Vision C, the Vision D, and the Vision S promise that edgy future exterior designs will be very appealing, and all the VW kit under the skin will work well in a practical sense. 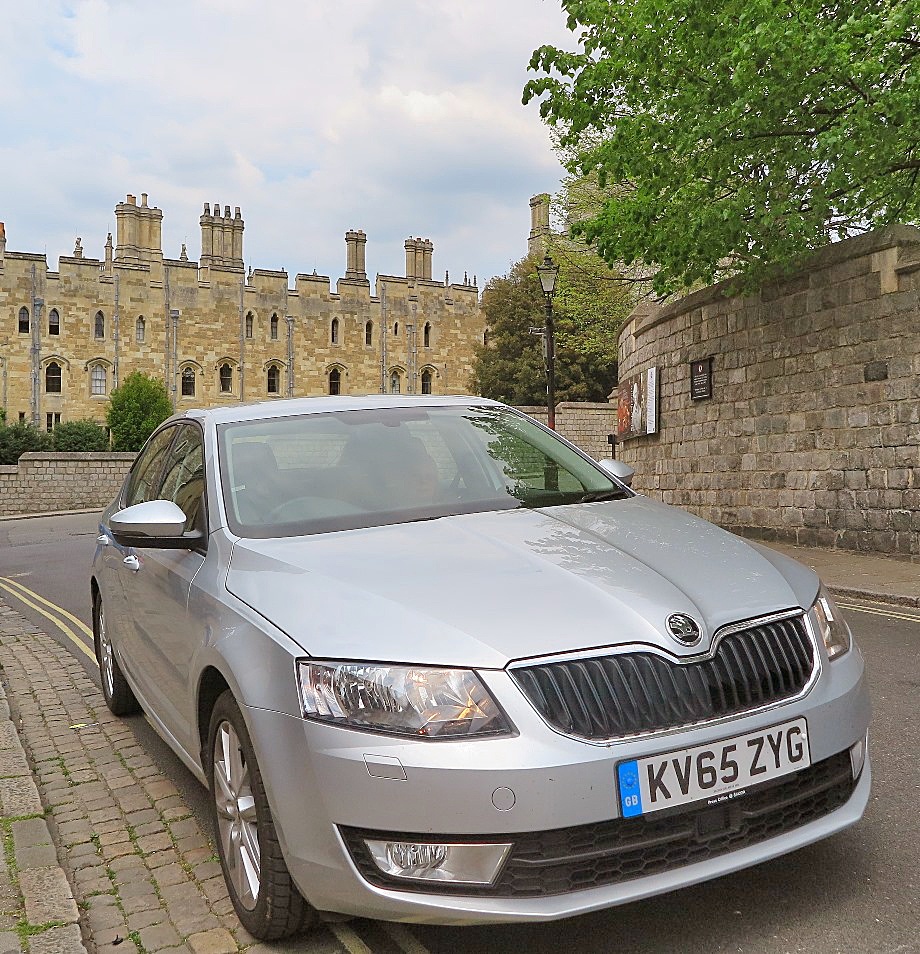 If you think Toyotas are boring, then buy a Skoda. You’ll stand out for choosing something different, you'll get practicality, reliability, great design and your wallet won’t be any lighter.

I just had to post this. I spend quite a lot of time in Italy and I have seen some crazy parking situations, but on Budapest's riverside boulevard, I thought this one may take some getting out of. The Suzuki Swift, according to a bystander was parked in by the Kia Sportage. 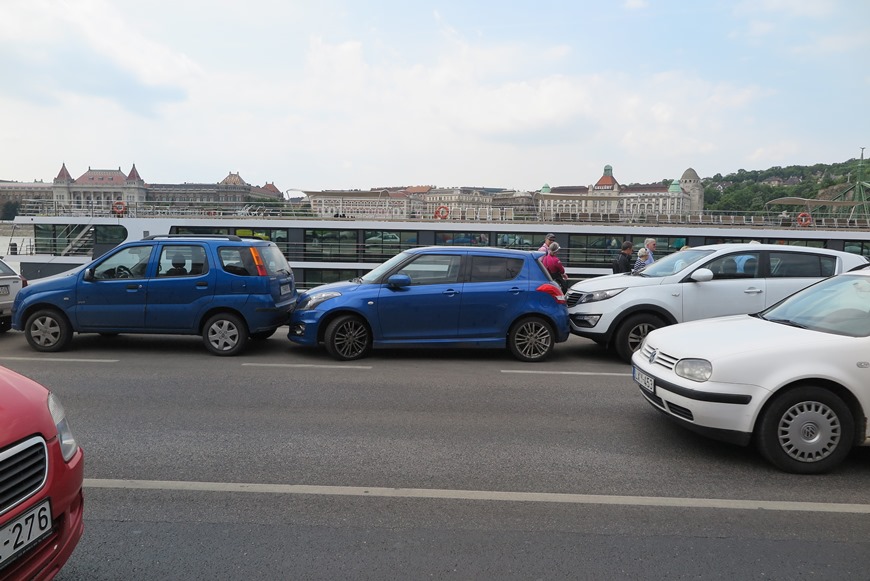 Posted by John Crawford at 1:18 AM No comments:

Creating enough noise to make cows lift their heads in curiosity, the Audi R8 speeds through the Cheshire countryside. This is a surprise opportunity, after visiting an old friend who is considering swapping his Bentley Continental GT coupe for the Le Mans-inspired R8 coupe. 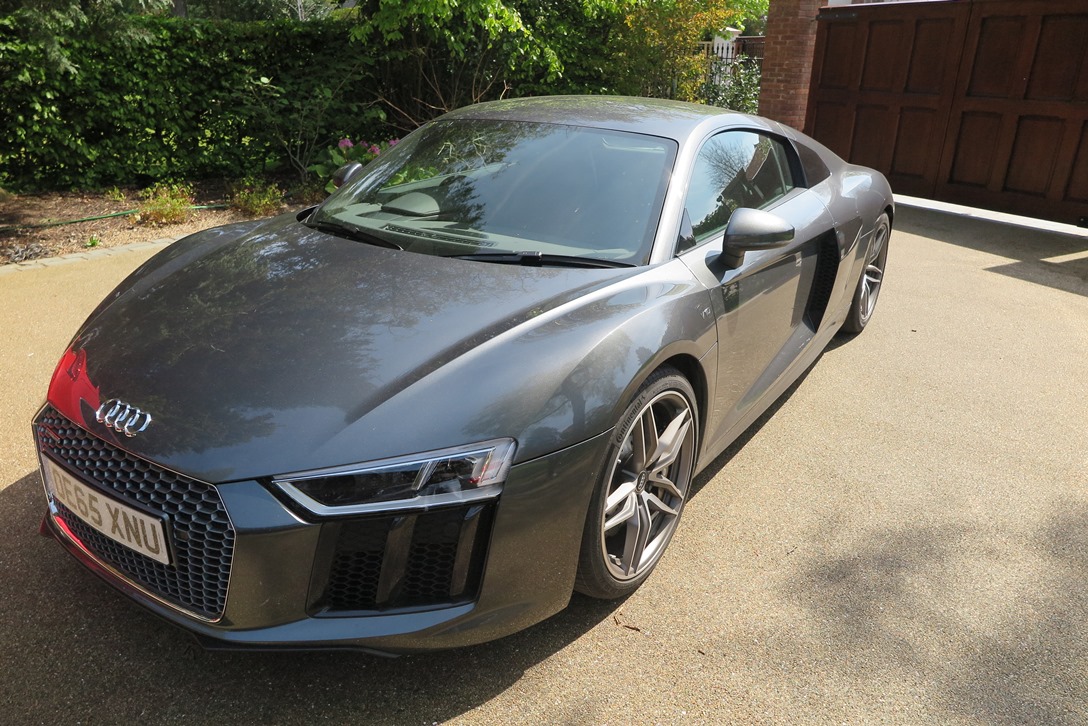 After less than an hour behind the wheel my opinion is it’s a no-brainer, and a done deal. He should start talking to the local Audi dealer about the trade in price for the Bentley pretty soon.

The R8 is a car which was pushed into production by a determined Dr. Martin Winterkorn. Spurred on  by Audi’s continued success in the 24 Hours of Le Mans, Winterkorn asked the Audi product teams to come up with a coupe design using Audi’s powerful V10 engine, and a platform and running gear based on the Le Mans race cars. The R8 Quattro concept car (designed by Frank Lamberty and Julian Hoenig) was shown at the 2003 Geneva Salon. The production version is based on the platform of the Lamborghini Gallardo.

It features a snug cabin, no storage places, little practicality, and the most beautiful exhaust note and mechanical noise from the V10 FSi when the accelerator is floored. Mind you, there are precious few places in Cheshire where you can extend the R8 to its performance potential. However, my friend Graham says he plans to drive it in Europe, where the opportunities are much better.

I envy him the many kilometres of great driving roads on the Continent, and after my recent drive through North Wales, I suggest he can even slip down into the Welsh countryside for a ‘fix’ of R8 madness on some virtually deserted roads – that is apart from Clarkson, Hammond and May.
Posted by John Crawford at 11:36 PM No comments: