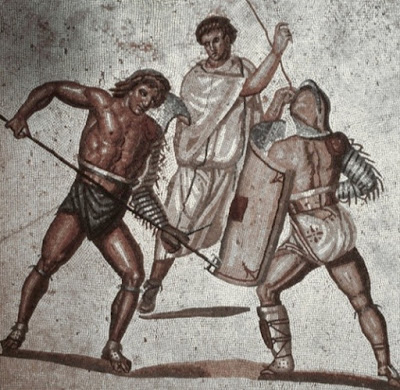 DEFINITION : A gladiator was a professional fighter who specialised with particular weapons and fought before the public in large purpose-built arenas.

Sounds a lot like today’s cutthroat global car market, except in this story there are four of these tyros shaping up against each other: 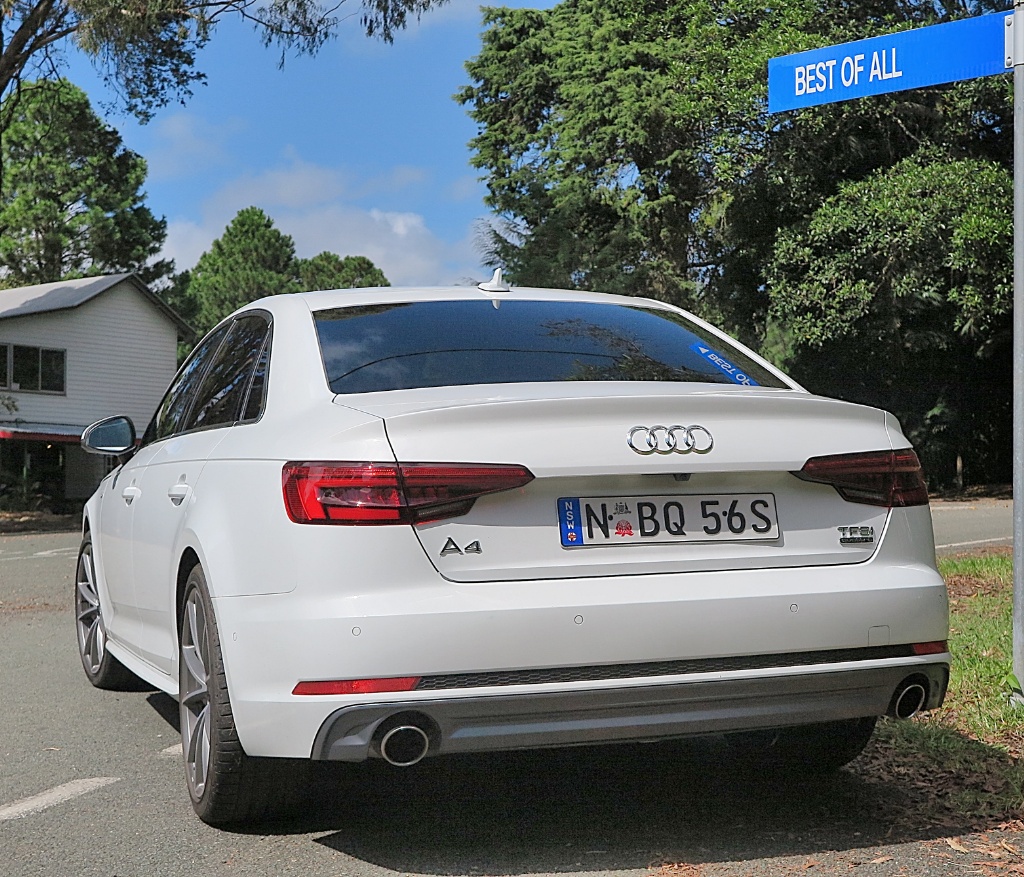 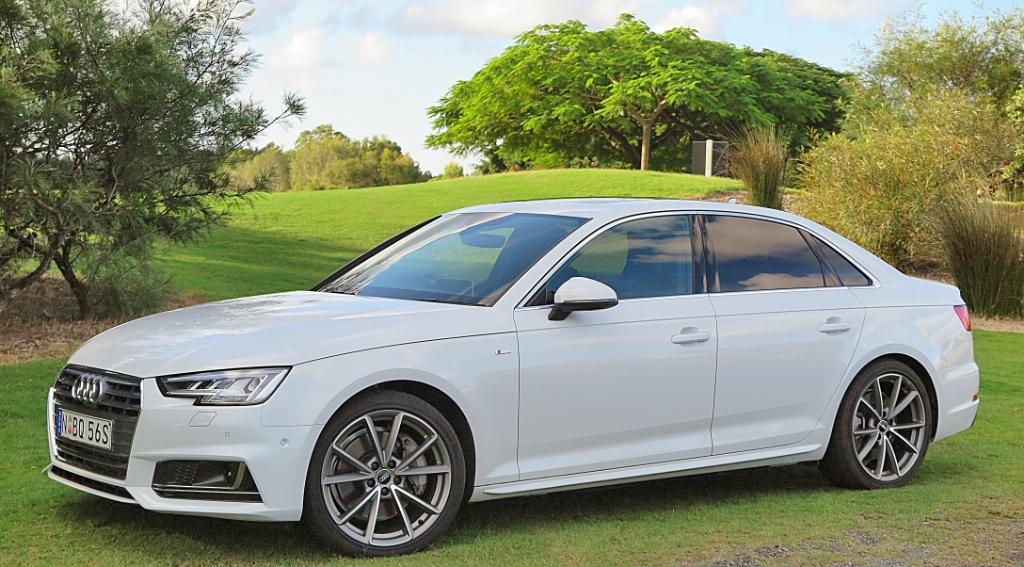 On first meeting this car, my initial reaction was: “When is an A4 NOT an A4?”
Answer: “When it’s practically an A6!”

My last company car in 2006, the year I retired, was an Audi A6, which by comparison with this new A4, was just 15cm longer, and weighed about 100kg more.

The interior package was almost the identical size in both cars, except cabin width is less in the A4.

In Europe the A4 is classified as a D-segment car; but comparing the dimensions it almost rivals the full-size, E-segment cars. So, I guess, if you want a D-segment Audi sedan now, it’s the A3 for you!

Okay, enough of the nit-picking. The new A4 retains the conservative styling of its predecessor with taut 'tensioned' flanks, but it bristles with new technologies, driver aids and in this case some extra flim-flam that comes with the S-Line package – for an extra AUD$3200!

The luxury segment that these four cars compete in is probably the hottest game in town, and the current champion is the Mercedes-Benz C-class, with the BMW 3 Series trailing behind. Audi has a huge hill to climb, notwithstanding a completely new gladiator from Jaguar - the XE.

However, I sincerely believe the A4 matches its competitors everywhere!

One of the casualties of ‘Dieselgate’ was a man I’m proud to call a friend, Ing. Dr. Ulrich Hackenberg. He was Head of Automobile Development at Audi AG. 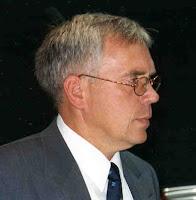 He was suspended as the enquiry got under way, but in response to being flagged as a possible culprit, it appears Ulrich chose to resign. He was/is a truly brilliant automobile engineer and this A4 is probably one of the last cars engineered under his experienced eye.

If Dr. Hackenberg led the team that built this car it deserves to be the Best of All – and it’s my opinion that VWAG will really miss his expertise, innovative flashes of brilliance and his solid leadership qualities. I don’t know what role, if any, he played in ‘Dieselgate’, but I still admire and respect his skills and talent.

After a quick trip to the sub-Alpine regions of the Gold Coast Hinterland, 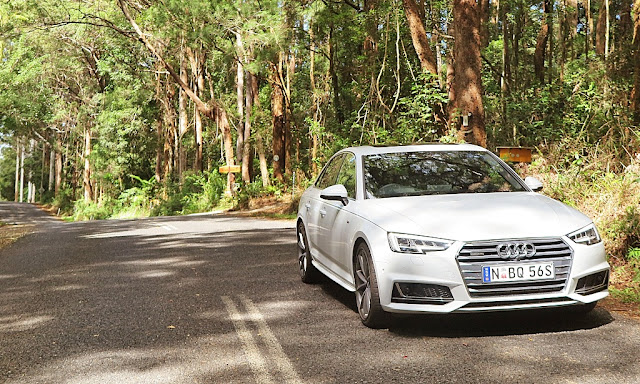 and dropping down into the lush rainforests surrounding the Numinbah Valley 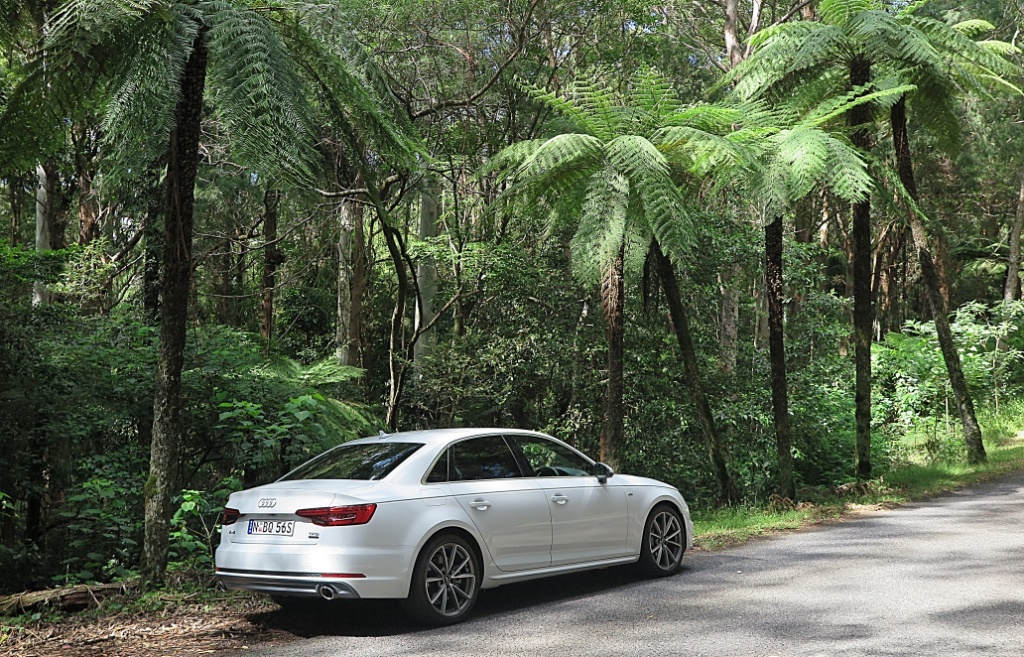 I decided this car matches its gladiatorial opponents with a strong set of weapons.

It is beautifully built. In fact it’s an automotive production work of art. Fit, finish, materials, trim and body margins and the elegance of its technology will satisfy all but the most diehard fans of the cars from Stuttgart and Munich. 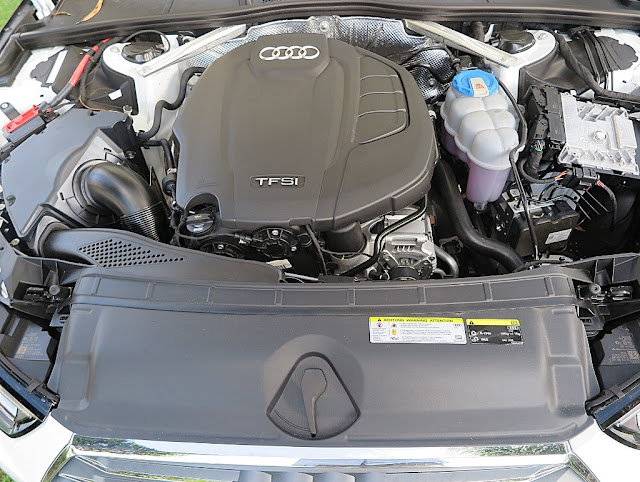 This car, with a 2.0L TFSI engine pushing out 184kW (280 bhp), driving through the 7-speed S-tronic twin-clutch gearbox and Quattro AWD is a super-smooth touring car. 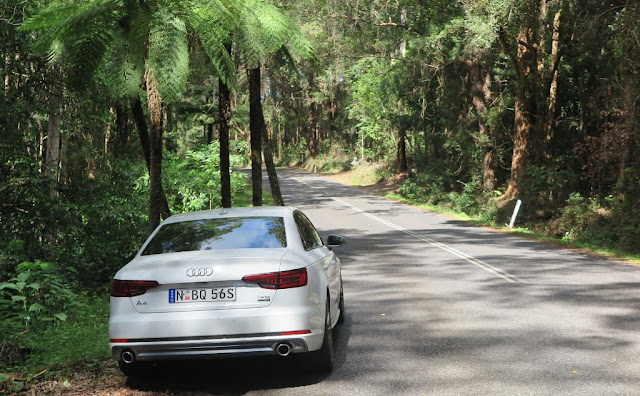 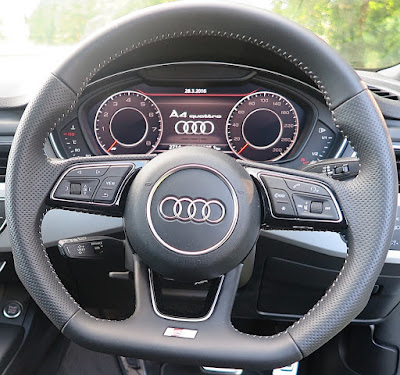 Blasting up the twisting mountain roads, flicking the up’n’down paddles, and howling out of the hairpins, the A4 was composed, quick and very responsive.

On the open, farmland highway heading back to the burbs, at cruising speed, the A4 displayed very competent touring suspension, with a firm, but not uncomfortable ability to manage our rather ‘dippy’ rural blacktops.

This car is able to match its competitors in every sense, but somehow Audi still manages to finish behind the Benz and the Bee-Em in the 'first choice' stakes.

I haven’t compared the Audi’s pricing item by item, but even in its quest to convince the buyers that they’re getting a genuine premium European-bred sedan, I still think Audi should sharpen the pencils and price the car and packages more realistically. Seems to me that’s the only way it will begin to assert itself.

Dare I say it, but especially taking 'Dieselgate' into account!

Having been a part of the VW Group for so long, I'm convinced that this attitude about pricing for 'perceptions of premium quality' was definitely a Ferdinand Piech philosophy, dutifully followed by the now-departed VWAG Chairman Martin Winterkorn.

Quite frankly I think this stance is nothing more than corporate arrogance. If VWAG really does want to take on Mercedes-Benz and BMW, then Audi will have to offer keener pricing – there isn’t any wiggle room anywhere else in this proposition.

By the way, as I really detest most of the new technology and driver aids – such as Lane Assist; Traffic Jam Assist; Collision Avoidance; Autonomous Technology; Perimeter-sensing and suchlike, I discounted ‘my Audi A4’ by around AUD$6,000 bringing it down to AUD$87,000!

Still a chunk of change, but at least I would not be paying for intrusive technology, and I would still be in command and responsible for driving the bloody car! Thank you! 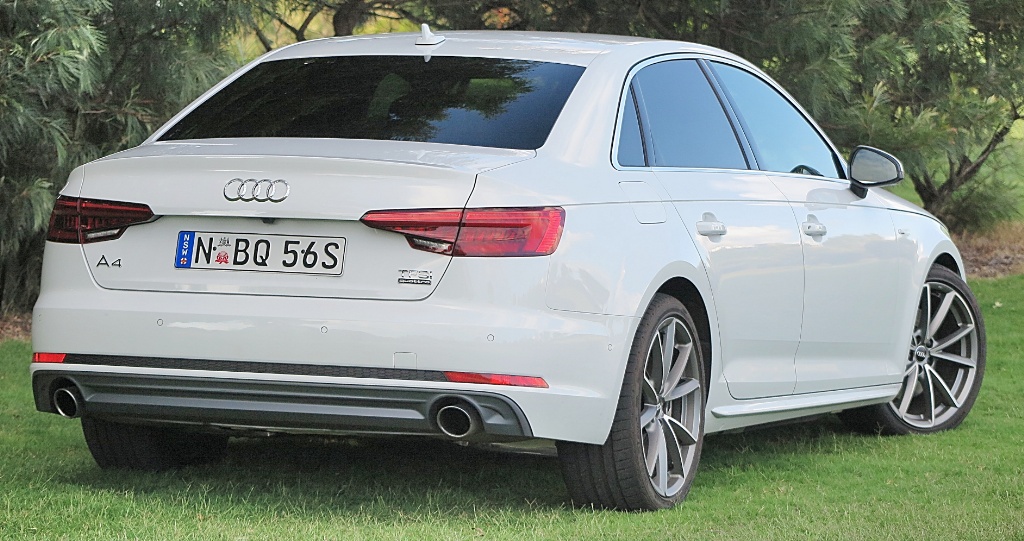 Posted by John Crawford at 3:41 PM No comments: 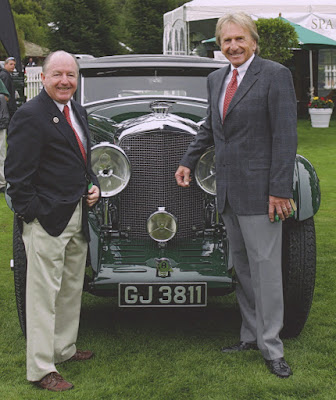 Since I first met Derek Bell in 2001 that element of ‘six degrees of separation’ keeps coming around, again and again.

I am finding so many times that we shared the same plot of ground and similar experiences, even though we did not know each other at the time.

This time our paths cross thanks to a famous Ferrari F2 car, offered for sale by FISKENS AUCTION, and appreciation to Fiskens for some great photos. 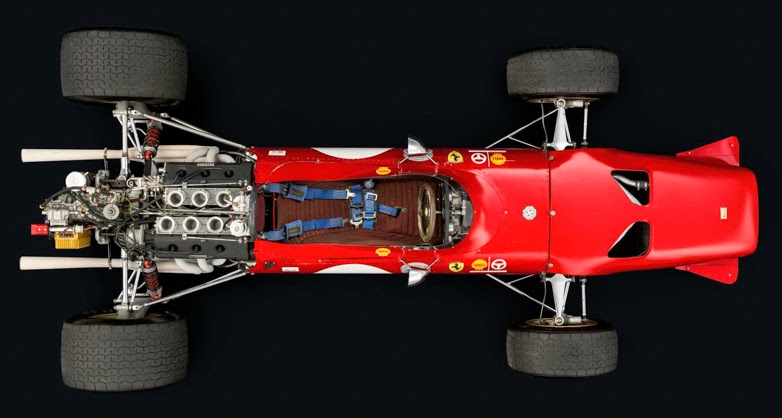 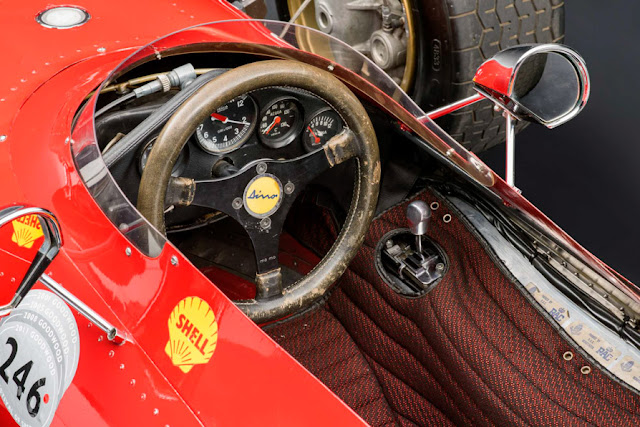 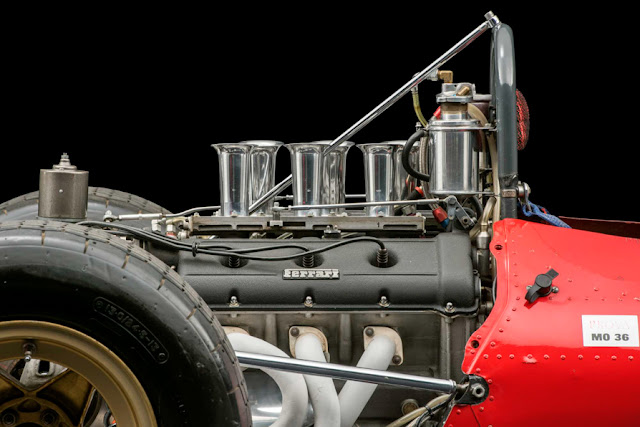 Compared to the British-engined F2 cars, the Ferrari was underpowered, and victory eluded the Scuderia until Ernesto (‘Tino’) Brambilla won the round at Hockenheim, Germany in 1968 – finishing the winner by one second after crossing the line with two wheels on the grass!

Actually the cars were entered under the banner of Scuderia Veloce, the Sydney-based team started by my old friend David McKay.

The 1969 Tasman Series was won by Amon, but Derek Bell’s results were impressive. First at the Levin (NZ) round; then fourth at Teretonga (NZ); and second at Warwick Farm and Lakeside (Australia). His victory at Levin being his first win in a Ferrari!

And, here’s that six degrees of separation thing again. Checking my diaries, my wife and I attended the 1969 Tasman round at Warwick Farm in Sydney and I still recall visiting the Scuderia Veloce setup in the Paddock to look at the cars, whilst Amon and Bell prepared for the race!

Even more special was the magical sound the of the Ferrari Dino 246/166 V6’s glorious exhaust note when the cars were at full stretch. 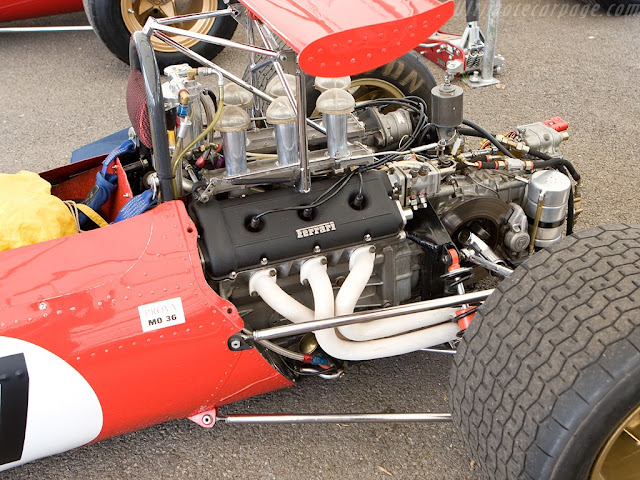 Derek told me just last week that while the F2 1.6 cars were underpowered, in Tasman guise it was a sweet car to drive. A very responsive chassis and lots of grunt from the bigger engine.
I’m so grateful that our friendship these days gives me the opportunity to hear these great stories about such a special racing car from the man himself. 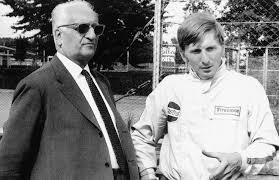 Derek of course went on to drive in Formula 1 for Ferrari, because Enzo really admired Derek’s talent, and will to win!

Posted by John Crawford at 10:36 AM No comments:

Imagine being in a room with many of the surviving great names of Australian motor racing! My life is charmed.

It happened on the Queensland Gold Coast on March 22, thanks to an enterprising former race mechanic, and a couple of motor racing wives!

Nola Richardson, wife of famed race mechanic Bruce Richardson, said to Val Maudsley at a recent funeral of a motor racing great: “Why is it we all get together only at funerals? Why don’t we meet up when we’re all alive to remember and reunite old friends and foes?”

Val Maudsley told her husband Ian, one of Australia’s most talented race engineers, and, as Peter Sellars once said:

“One thing led to her mother.” And we had the greatest racing reunion of living legends ever staged.

Although I never raced, I was a diehard enthusiast for cars, tuning and working on cars, and attending motor races.

I did however become one of Australia’s team of motor racing commentators between 1961 and 1968 – attending race meetings at Warwick Farm, Amaroo Park, Catalina Park, Bathurst, Oran Park (in NSW), Surfers Paradise, and Lakeside (in Queensland) and Wanneroo Park (Western Australia).

As a commentator, and later a racing reporter for Racing Car News, I met and knew most of Australia’s racing greats, so I was honored to be invited to join the motor racing royalty at La Piazza restaurant on the Gold Coast.

Allan Moffat and I first met in 1969 when he debuted the Coca Cola-sponsored Ford Mustang at Warwick Farm. I was a disc jockey at Sydney’s Number 1 Top 40 station, and presented a Saturday afternoon program called ‘Pitstop’. 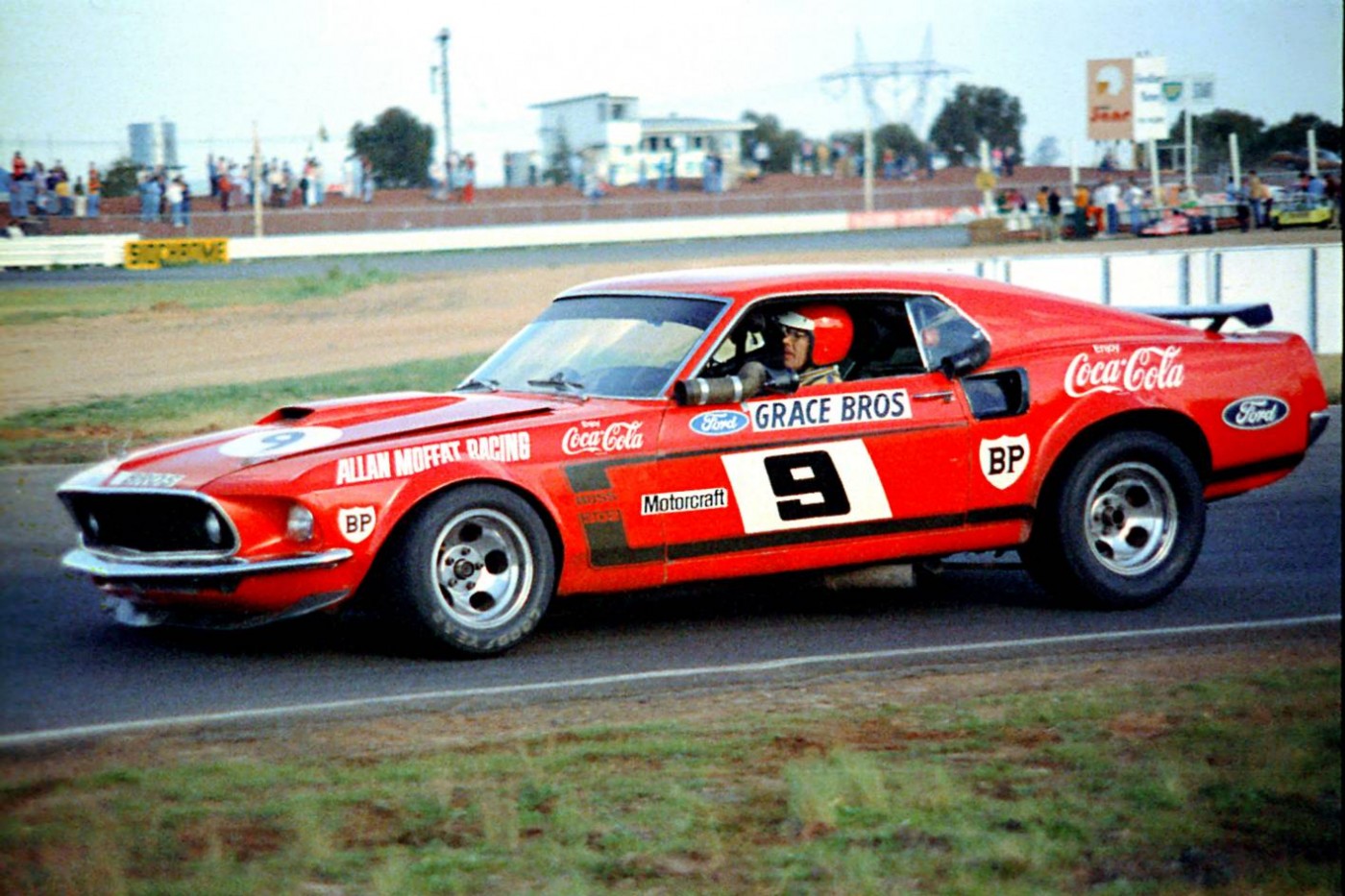 His sponsors suggested we meet at the offices of the AARC, which conducted the race meetings at Warwick Farm. We warmed to each other immediately and have been good friends since.

I first met Kevin Bartlett back in 1968, when he drove an Alfa Romeo GTA for the Alec Mildren team. 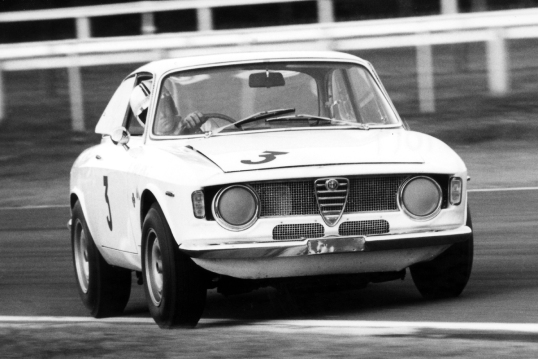 He raced a wide variety of cars over the years, but none more famous than a Chevy Camaro sponsored by Sydney television station, Channel 9. 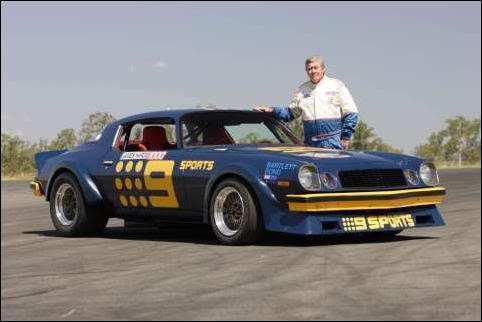 Jim Richards, a transplant from new Zealand, has been one of Australia’s most consistent race winners since he first began racing in 1974. He’s known as the ‘Rainmaster’ for his outstanding car control racing in wet weather. 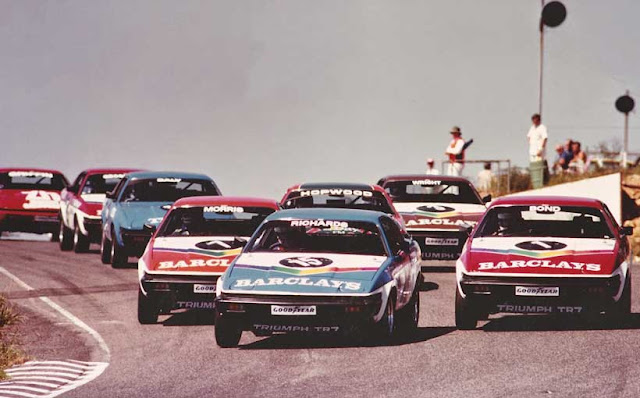 I hired him as one of the pro car drivers for the 1980 Barclays TR7 Pro Car Series at Amaroo Park. 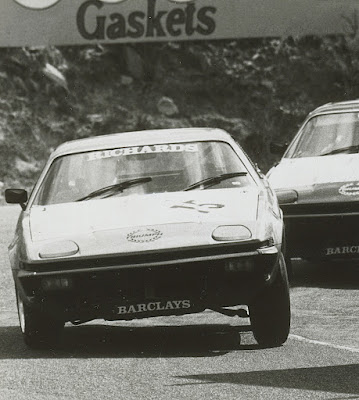 That was also the time when I met and became close friends with one of Australia’s finest engine tuner/builders, Ron Gillard.

I hired Ron to build and prepare all the TR7 sports cars for the TR7 Pro Car Series.

One of the people I consider to be one of the greatest of our home-grown racers is Spencer Martin.

My old friend David McKay spotted his talent and hired him to drive for his Scuderia Veloce team. Spencer first turned out in a magnificent Ferrari 250LM, which Scuderia Veloce raced all over Australia.
Spencer also went on to win the Gold Star medal, and retains not only his youthful charm, but is also very happy in retirement reflecting on his great career in open wheelers as well as the 250LM.
There were many other great names present – John Harvey, Allen Grice, Fred Gibson, Robin Bessant, Dick Johnson, Charlie Morris, John French, Syb Petralia - to name just a few.

It was a magnificent gathering of racing talent and support, thanks to a number of race mechanics and car builders who also attended.

It was so successful it has been decided to make it an annual affair, and I’m certain that next year those who couldn’t attend this year will be there – with bells on!