Ing. Dr. Franz-Josef Paefgen joined Bentley Motors at a crucial time in 2002. It was almost four years after Volkswagen AG acquired it, and the company was floundering under management by an engineer whose ego, many said, exceeded his expertise. 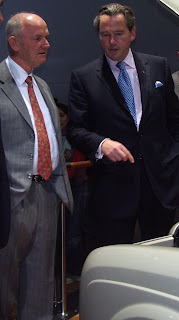 Dr. Ferdinand Piech & Franz-Josef Paefgen
VW AG Chairman Ferdinand Piech needed to put VW’s billion pound investment in safe hands, and he chose the highly experienced and aristocratic Paefgen. VW had committed funds not only to acquire the British carmaker, but had also signed off on the project which would make or break it - the Continental GT. In addition VW AG also committed to underwrite Bentley’s very expensive return to racing in the 24 Hours of Le Mans.
There was a great deal at stake for Volkswagen. It may have been a giant corporation creating lots of revenue, but the Bentley exercise was destined to become ‘Ferdinand’s Folly’ if it’s lack of direction wasn’t corrected.
Having already enjoyed an impressive career as Chairman of Audi, Paefgen would have his work cut out for him, dealing with a slightly eccentric British industrial mindset.
Fast forward eight years, and as Franz-Josef Paefgen relinquishes the Chairmanship to another distinguished German auto executive, Wolfgang Durheimer, both VW AG and Bentley Motors can be grateful that Paefgen proved to be an outstanding combination of maturity, determination, integrity and experience. 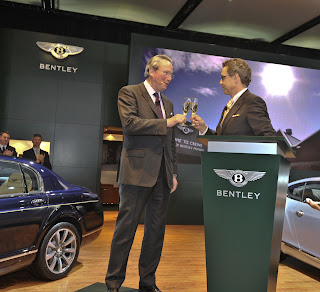 F-J Paefgen and Wolfgang Durheimer, Detroit 2011
There is a fallacy perpetrated (and perpetuated) by car companies, and usually driven by the bean counters, that it’s more cost-effective to keep the production line rolling, building cars they can’t sell, and then give the dealers hoards of cash to move them off the dealers’ lots. This does two things - first, it signals to the buyers that the original price is artificially high, and it seriously damages resale values.
This was one of Paefgen’s first challenges. The previous chairman had overseen over-production, and dealers were stuffed with cars.
Within weeks of taking over at Bentley, Paefgen cut production, and restored order.  This would not be the only time he was required to temper output in order to balance fading demand. He had to do it again when the GFC hit the luxury car business.
Franz-Josef Paefgen is an Anglophile, and appreciates much about England, but far from being a dewy-eyed romantic, he is tough and disciplined. The workforce at the venerable Crewe works recognised a leader when Paefgen began making decisions about Bentley’s future. 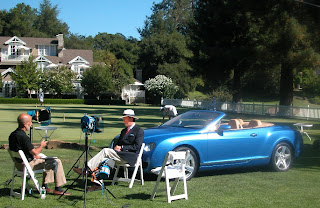 F-J Paefgen launching the Bentley Continental GTC 2006
He became Bentley’s unstinting champion in the Volkswagen Boardroom, and whilst his personal style suggests aloofness from the daily grind, he is always across the detail.
Of the many challenges he faced in his eight years, there is one moment that truly delighted him - the victory at Le Mans in 2003. Posing with the winning drivers, and Derek Bell, at the Eiffel Tower in Paris, Paefgen celebrated with the knowledge that Bentley had pulled off an incredible gamble. 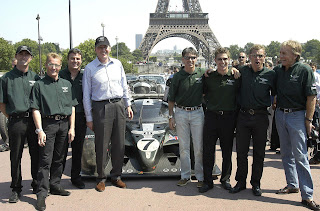 Team Bentley in Paris, June 2003
The Le Mans program had been announced in 2001 as a three year project, win, lose or draw. As the huge Rolex clock at the circuit showed 4pm on Sunday afternoon in June 2003, Paefgen, Bentley Motors and the entire team breathed a huge sigh of relief.
Paefgen is not a racer, but he has enjoyed many track experiences, none more special than in 1999, when as Chairman of Audi, he drove one of the great Auto Union monoposto race cars. As I watched him take this roaring, crackling beast onto the Laguna Seca circuit in Monterey, California, I realised this would be one of the great ‘car experiences’ of Paefgen’s career, and I grabbed some photos to commemorate his drive. 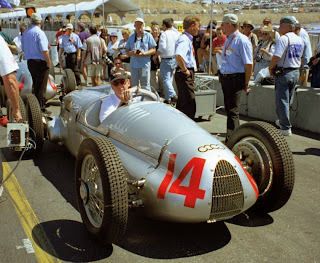 Paefgen at the wheel of the 1937 Auto Union
The car was the only remaining ‘original’ Auto Union Silver Arrows V16 single seater from the 1930s. It was built in 1937 as a ‘mountain climb’ car, as opposed to a circuit racer, and the delicacy of the situation - “Audi Chairman drives priceless original relic” was not lost on anyone that day. 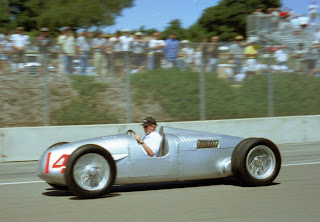 Paefgen lapping the Laguna Seca circuit, August 1999
Thankfully, Paefgen completed his laps without incident, smiling broadly as he returned to the pits. This was an event in his life which must surely have been close to nirvana for an automotive engineer like Paefgen.
Another great moment for Franz-Josef Paefgen was the launch of the first all-new British-designed-and-built Bentley in more than 70 years, the Mulsanne. This was an oustanding achievement for both the Chairman and the Company, and it also highlights VW’s confidence in the management of the Bentley brand.. 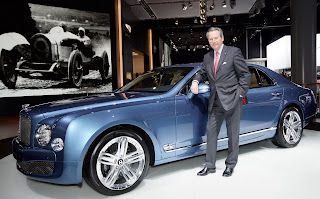 Launch of the Bentley Mulsanne, 2009
At the 2011 North American International Auto Show in a cold and snowy Detroit, Paefgen handed Bentley Motors over to the ‘new guy’, launched the new Continental GT coupe, and stepped back from a job well done. 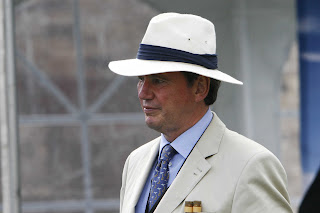 Franz-Josef will stay on at Bentley Motors as an ‘advisor’ for a while, but he and Sigrid plan to spend considerable time relaxing at their lake house in northern Italy. However, I suspect his brain will still be traveling at ‘work speed’ for the rest of his life. Sir, it has been a great honour and pleasure to know you.
Posted by John Crawford at 9:33 AM