The diversity of the Italian countryside offers no better example than touring from the eternal city of Roma, to the Sorrentino Peninsula, and along the Amalfi coast to Pompei.
From Fiumicino airport’s rental car desk, it’s a quick 20 minutes drive around the Circonvallazione Meridionale, joining the Autostrada del Sole (A1) south. Then, 270km later, you’re on the outskirts of Napoli. Take a tip, and skirt the birthplace of Pizza, and take the SS145 via Castellammare di Stabia to Sorrento, where you can stop for a coffee. That trip will have taken you around three and a half hours, and you’ve earned a break. 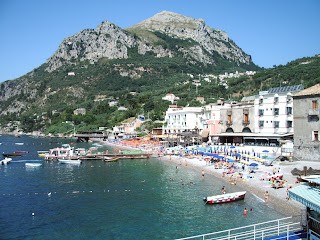 Marina del Cantone
However, Sorrento is just a pit stop, because the eventual destination is a tiny fishing village on the south coast, called Marina del Cantone. This is a 45 minute journey along tiny, twisting, provincial roads, to what is essentially a dead-end. It’s what is at this dead-end, that’s so inviting.
Our lodging is in a ‘restaurant-with-rooms’ known as the Taverna del Capitain. It is the only 2 star Michelin restaurant on the Costiera Amalfitana with 12 charming rooms dal mare ...
and full pension means three glorious meals a day and a room overlooking the bay, for about USD$400 a night. It’s worth every penny. 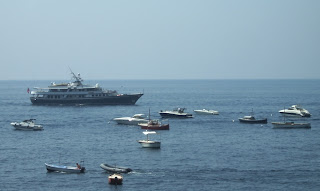 To dinner, at Taverna del Capitain, by boat
Because of the difficulty of reaching the village by road, many diners arrive by yacht, and moor off the beach, taking a tender to the restaurant. Dinner is classicly Italian, takes about four hours, and leaves you well-satisfied. 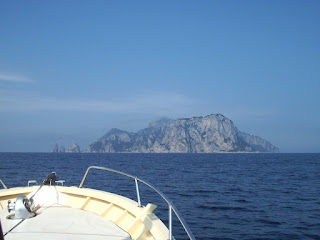 Isle of Capri
This is also a good starting point for an easy day trip to the isle of Capri. Hiring a local boat and pilot for the day from Ciuffitiello will set you back about €200, but once again it’s an experience you’ll remember for a long time to come. A casual lunch at the Ristorante da Gioia at Marina Picolo, could only be matched by a buffet at the Quisisana Hotel just off Capri’s main square. 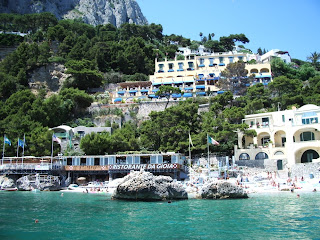 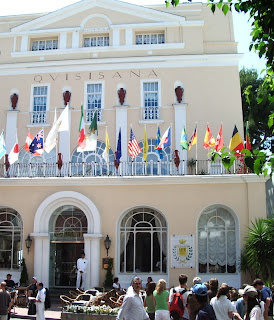 Hotel Quisisana, Capri
Returning to the Sorrentino Peninsula, and back on the road, it’s just a 50 minute (25km) trip to the beautiful town of Positano, which seems to tumble down the hill towards the water.  Positano is stacked with great hotels, and restaurants and definitely worth a pit stop. 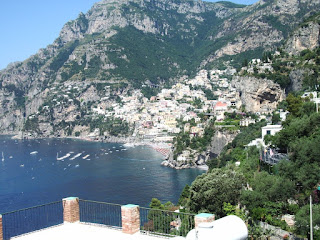 Positano
However, our destination is Amalfi, on the Gulf of Salerno and another 20km further east. It’s the biggest city in this region of Campania, with a population just over 5500. In medieval times it was an important naval and trading city, once boasting a population as high as 70,000. 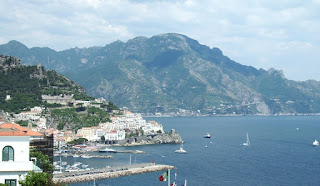 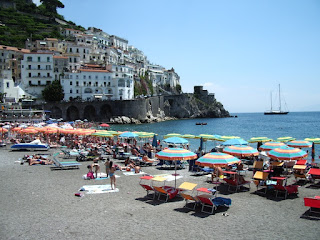 Beach at Amalfi
Today, it’s bit sleepy and offers a great variety of hotels. The ‘beach’ is like many on this coast, and is composed mostly of tide-tumbled stones, but the water is inviting and the scenery pretty interesting. 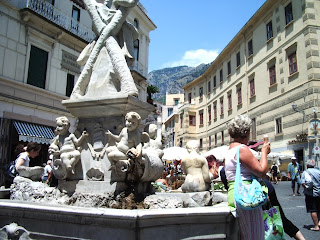 Town Centre, Amalfi
Amalfi is definitely worth a couple of days, but after that you should head for a look at Pompei, just 50km away – a one hour drive.
The modern city of Pompei looks a bit down at heel, but the people are very friendly, the restaurants are great, and a useful visit to the ruins would easily soak up two days. 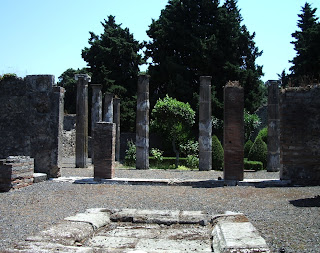 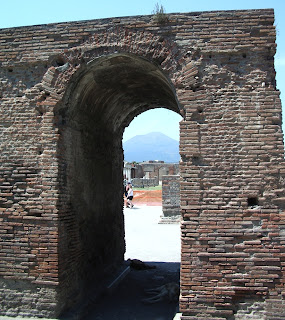 Ruins at Pompei, Monte Vesuvio through the arch
After you’ve wandered, and wondered, at the surprising preservation of the ruins, and considered the forbidding Monte Vesuvio, you’ll need to get back onto the Autostrada del Sole, and return to Roma. The 260km trip should take about three hours, and then you can plan your days in the city of popes. But, that’s another story.
Posted by John Crawford at 4:26 PM