It's March, Melbourne and the AGP!

Racing at the Australian Grand Prix began under a dark and cloudy sky, but thankfully the sun shone on race day. Unfortunately it did not shine on Mark Webber. In practice he and teammate Vettel swapped fastest times, but on race day he was overhauled by the world champion, and Vitaly Petrov, Lewis Hamilton and Fernando Alonso - really, Webber wasn’t in the race.

As usual Webber’s disappointment was marked by a phlegmatic reality check. He said himself: “I under-performed.” However, it makes you wonder if the two Red Bull F1 cars are truly equal. In a media interview I overhead team boss Christian Horner say: “We try to provide the same cars for both drivers.” What?? 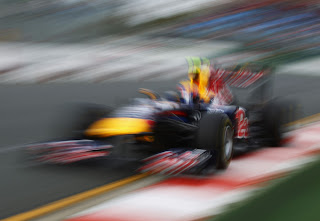 I’m conscious that F1 does not strike a chord with some people, probably only the fanatics, but there is no doubt that technically the sport does advance the frontiers of technology. So much so, that the FIA keeps inventing modifications to the rules to retain some sense of equality, and keep the big teams from steamrollering the small teams with money and technical brilliance.
An interesting development has been the Marussia-Virgin team’s decision to use “Computational Fluid Dynamics (CFD)” rather than depend for aerodynamic design to flow from a wind tunnel. F1 experts tell me it costs thirty million pounds to build and run a wind tunnel, and Virgin seems to think they can optimise their aerodynamics by computer modeling, rather than watching air at high speed ruffle some cotton tags. The decision certainly preserves its miniscule budget.
Despite the skeptics I really enjoy F1, and there are certainly some great characters, and many talented people who command respect for their ingenuity, determination and hard work.
﻿ ﻿
For me however, it’s always the people I enjoy meeting. I had a great chat with Murray Walker, who was in great form, and thrilled to be Down Under again, having just flown in from the Clipsal 500 in Adelaide.
﻿ ﻿
I spent some time with the gracious and energetic Chairman of the Grand Prix, Ron Walker.
﻿﻿﻿ ﻿﻿﻿
There were also a lot of past champions, including Niki Lauda, and Walter Rohrl.
Probably my most interesting meeting was with Billionaire Russian Eugene Kapsersky, who is the founder and chairman of Kasperky Lab, the world’s fastest-growing anti-virus software. What a character!
﻿ ﻿
﻿ ﻿
One highlight on race day was a photo session with Sir Jack Brabham, Mark Webber and Alan Jones. I think it’s remarkable that Australia has produced such great drivers.


Even more so when you think that our premier formula today is the rubbish, silhouette series called V8 Supercars, which everyone seems to think is wonderful. It’s nothing but a theatrical parade of dollars, egos and virtually identical cars, masquerading as sport.
An Australian F1 Grand Prix may well be priced out of our reach in years to come, so I’m just glad I’ve been around to witness our F1 AGPs from 1985 to the present.
(Photos: Getty Images and John Crawford)
Posted by John Crawford at 10:32 AM