Here it is, May 1981 in Monte Carlo, for the Monaco Grand Prix and I'm here as a guest of Williams F1 team and the sponsor, Leyland Vehicles - the Truck, Bus and Tractor division of behemoth automotive company, British Leyland. It's a conglomeration that almost ended the future of companies belonging to it.


However, thanks to a lot of sponsorship dollars splashing through F1, I am in the paddock and pits, and had the opportunity to roam the circuit with my camera, courtesy of a pass arranged by my good friend, and 1980 World Champion, Alan Jones - thus many of the photos are of AJ in action. 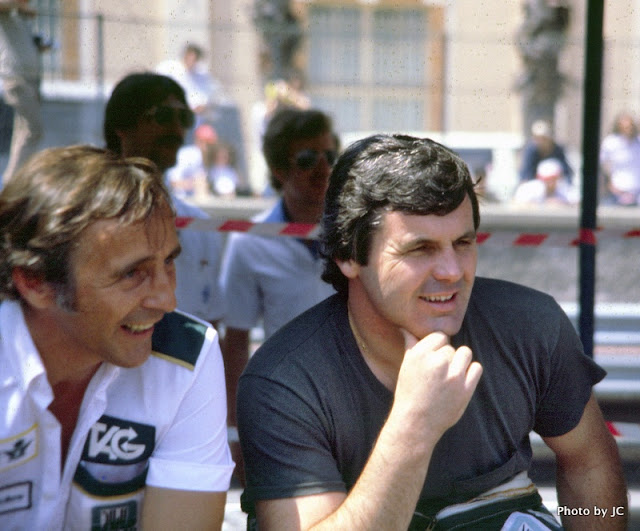 AJ relaxing before the Start with his good friend, Williams' Corporate Sponsorship Director, the late Charlie Crichton-Stuart. Charlie was the typical irrepressible British rogue with a wicked sense of humour. I noticed that Frank Williams never asked Charlie too many details of the sponsorship deals. He was just happy they funded the F1 team. 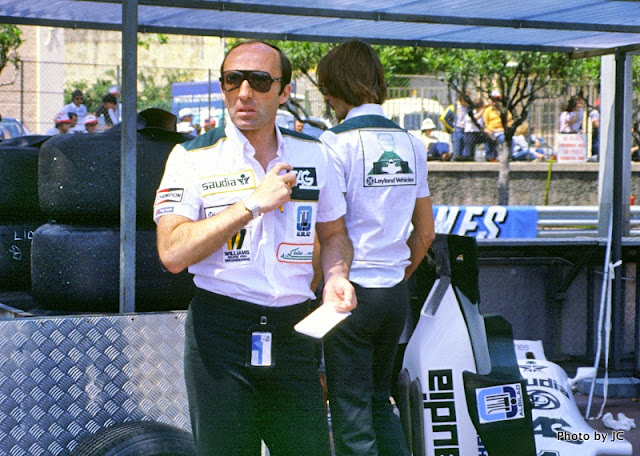 Amazingly, after a few false starts, Williams Grand Prix Engineering was only formed in 1977, when Frank partnered with his former employee, Patrick Head, to create the first Williams FW chassis. Their first significant victory in both the Drivers' and Constructors' Championships came just three years later, when Jones won the Championship in 1980. A car accident in March 1986 in France resulted in Williams sustaining a spinal cord injury and becoming quadraplegic.


While driving a rental car from the Paul Ricard circuit to Nice airport, Williams, who wasn't wearing his seatbelt, lost control of the car which then rolled over causing him to crash onto the roof and resulting in a spinal fracture. Since the accident, Williams has used a wheelchair. He was knighted in 1987, and in March this year announced that his daughter Claire will succeed him as CEO, and he will remain as Principal of the team. 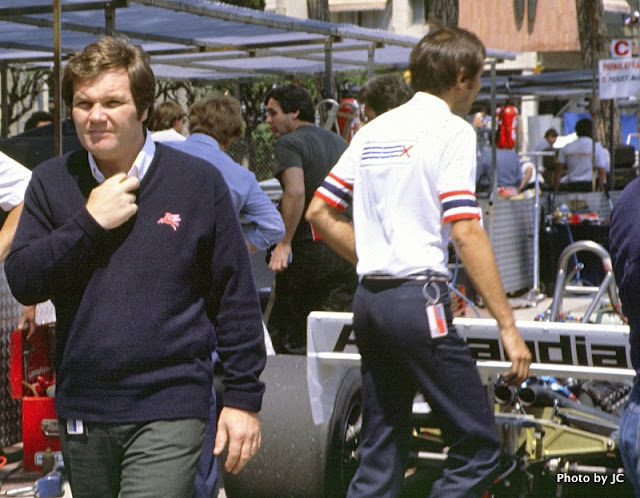 Patrick Head has been the force behind the design of all Williams Grand Prix cars, and is as charming as Frank is short on it. Sir Frank, always brusque does not suffer fools gladly, but once said he had a special affection for Alan Jones, because of his larrikin charm, enormous driving talent and incredible determination. 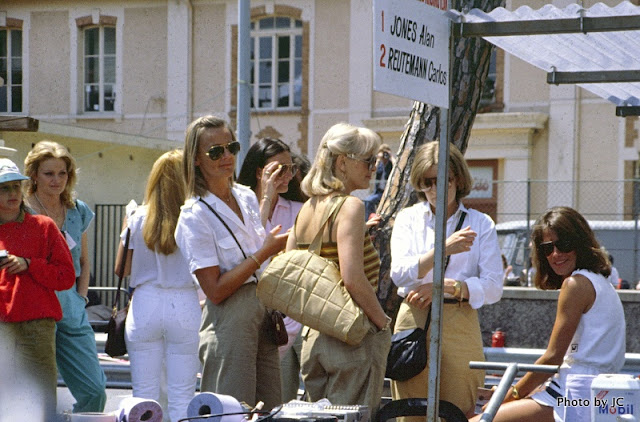 WAGS (wives and girlfriends) in F1 always seem to be the most attractive women on the planet (just my personal opinion), and their presence brightens up a paddock full of blokes. The lady in the striped top with the beige shoulder bag is Beverly Jones. 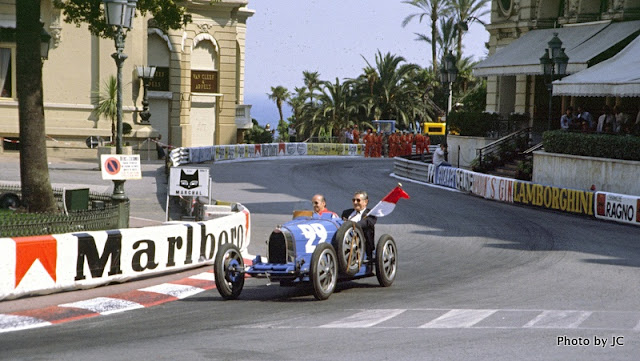 Bugatti is well known in the Principality, with a long history of wins and participation in the Monaco Grand Prix. Monaco circuit designer Louis Chiron held the most podiums in Bugatti cars, but only ever came sixth at Monaco. 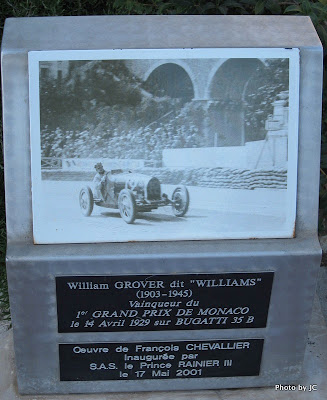 Monte Carlo on a sunny day is gorgeous, as the lead photo shows, but when it rains the race is usually total chaos, thanks to the narrow track, and many corners.


In 1981, the weather was fine, but overcast, however from 20 starters, only six cars finished! Amazingly, there were 11 cars which failed to qualify.


Alan Jones carved through the field, but the eventual winner, Gilles Villeneuve not only had the pace, but also started from Pole and, as is often the case, he was never headed.


Much like Mark Webber's exciting win in the 2012 race.


Of course there are many who enjoy the ambience of Monte Carlo at Grand Prix time, but are less concerned with the race, than with catching rays of sunshine. 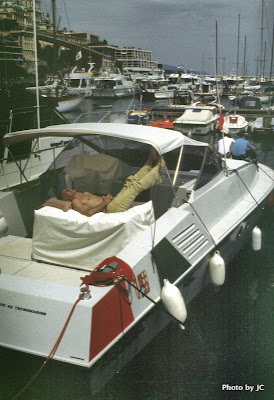 Getting to Monte Carlo is a challenge. The roads are jammed, and the parking (if you can find any) is exhorbitant. Best thing is to park in places like Ventimiglia or Nice, and catch the train.


There are dozens of great little bars and restaurant to eat and drink, great shops, although the prices at GP time seem to take a mysterious hike North of their regular levels! What a surprise!


The rules which applied to holding residence in Monte Carlo 1981 said you had to have at least one million US dollars cash in your bank account which was totally unencumbered; and you had to be able to pay the local taxes each year, without diminishing your balance!


However, it's a great tax haven, and today most F1 drivers maintain their official domicile in Monte Carlo. 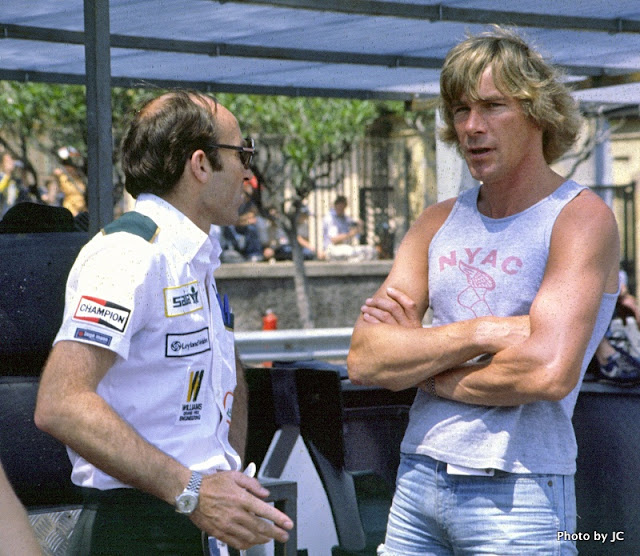 Another irrepressible British rogue, the late James Hunt, talking with Frank Williams. I became friends with Hunt after inviting him to a party, which I hosted on behalf of Jaguar, in Adelaide for the 1986 Australian Grand Prix, and thereafter he turned up for every other Jaguar cocktail party we held.


Naturally, he was a great draw, and always managed to ensure he brought plenty of F1 pals along, which meant that the Jaguar party at the Adelaide Hilton was always talked about, and towards the end in 1991 it was very popular, and a place to be seen on Saturday nights. 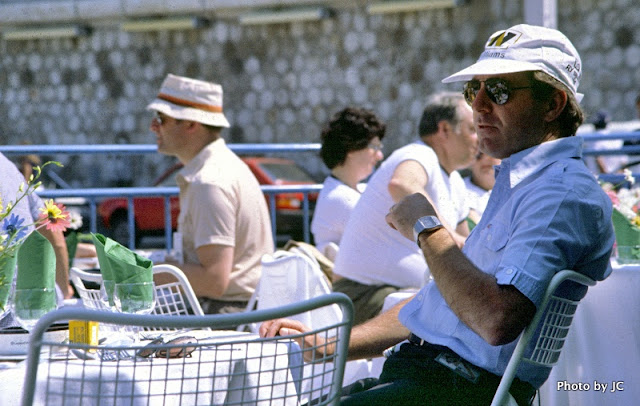 Here I am, 'lolling' in the Williams F1 Hospitality Suite. 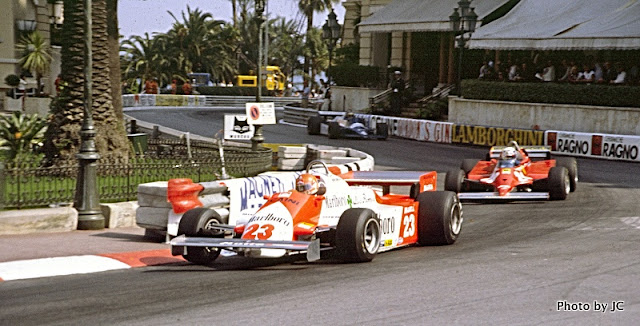 Ah! The Race! Villeneuve got a brilliant start, but here is Alfa Romeo's Bruno Giacomelli and Ferrari's Didier Peroni hard at it in Casino Square, passing the Hotel de Paris. 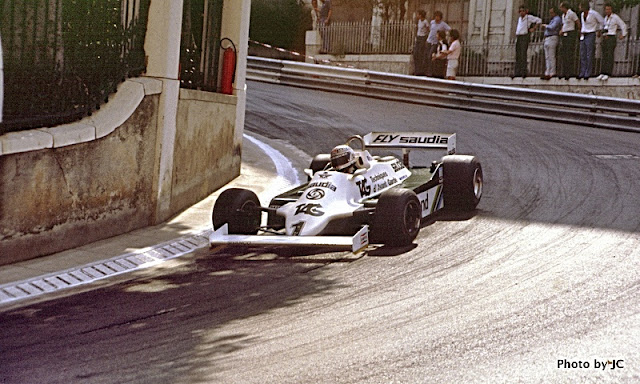 AJ was brilliant on the day, but could only manage second place, after a fuel problem in the closing laps. This is Mirabeau, where he performed some great, and brave, passes. 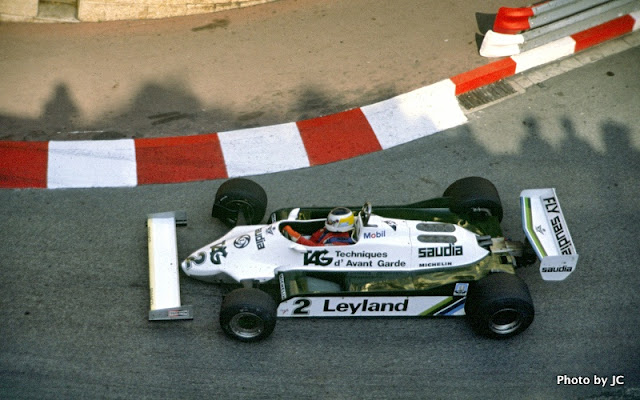 The second Williams, with Carlos Reutemann at the wheel started strong, but succumbed to gearbox failure. Not surprising with the number of gearchanges required. Monaco was hardest on gearboxes, according to my friend Stirling Moss's recollections. 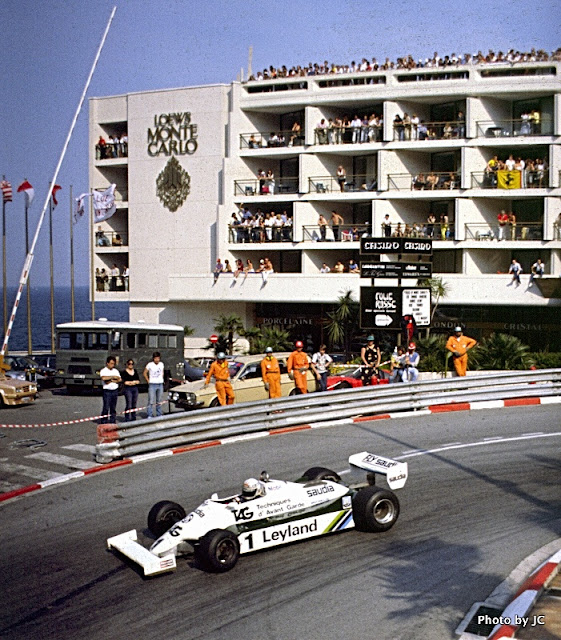 AJ at the Loews Hairpin. In 1981 one of the balconies boasted a large crowd of Aussies, including Australian champion Colin Bond and his wife Robyn, with a banner hung over their balcony railing supporting AJ. 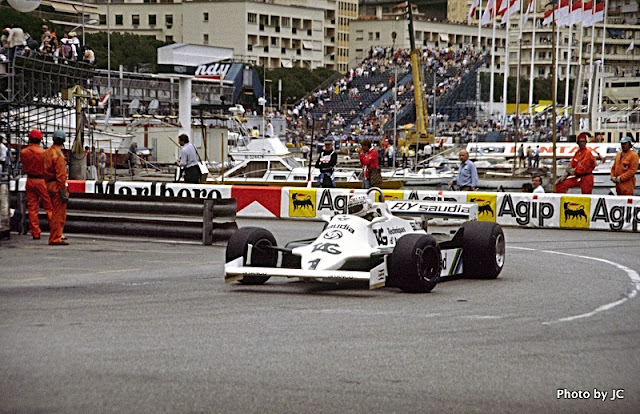 AJ entering the tricky twin apex corner at La Rascasse. At this point Villeneuve and Jones were well clear of the rapidly diminishing field. 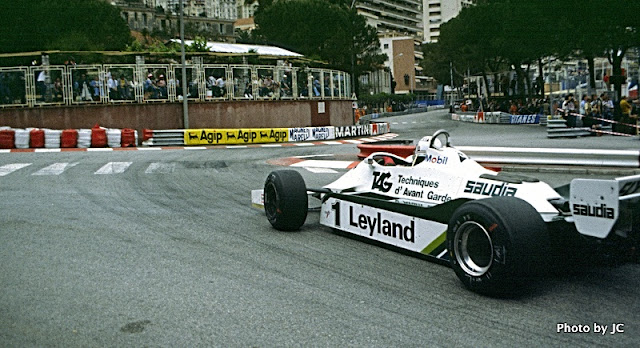 AJ entering the Start-Finish straight, although straight it is not! 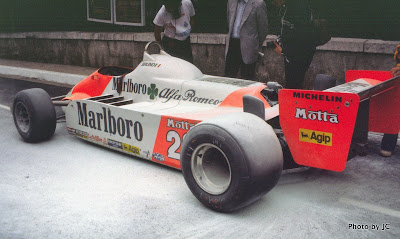 
Covered in fire-fighting foam it awaits being lifted from the track.


As Martin Brundle commented at the 2012 race, the Monaco officials are well-practiced and gifted in the art of quickly removing dead grand prix cars. 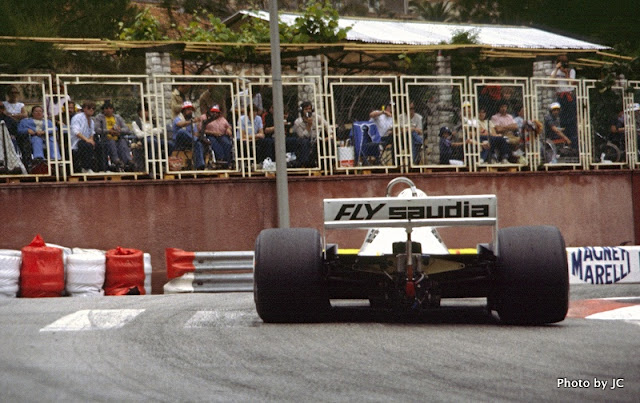 AJ exiting La Rascasse, to the delight of the diners. 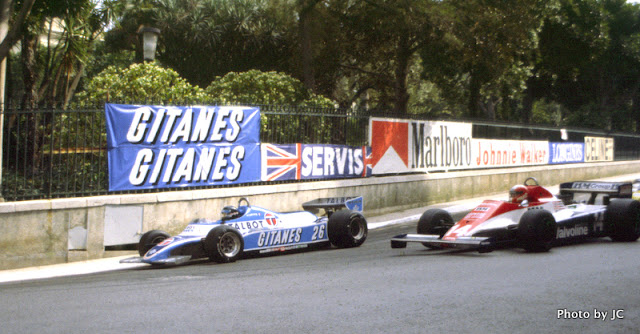 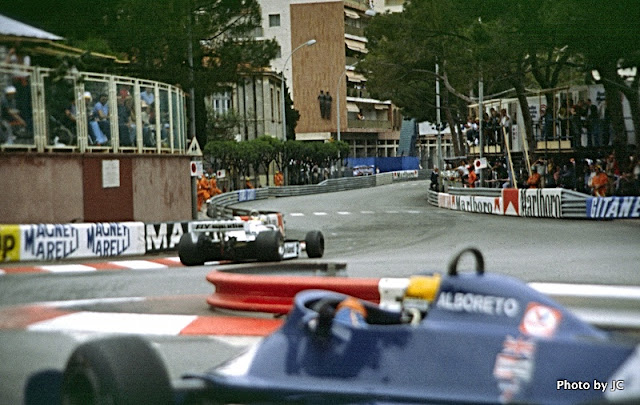 Reutemann just before his gearbox failure on Lap 45. Italian Michele Alboreto was out on Lap 50, due to a collision. 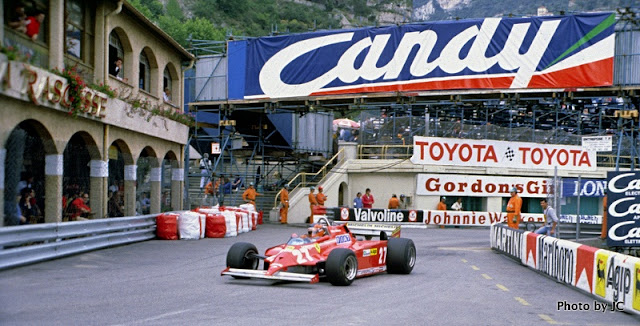 Race winner Gilles Villeneuve leaving the Harbour and entering La Rascasse. Don't bother trying to get a table, it's booked out a year ahead! 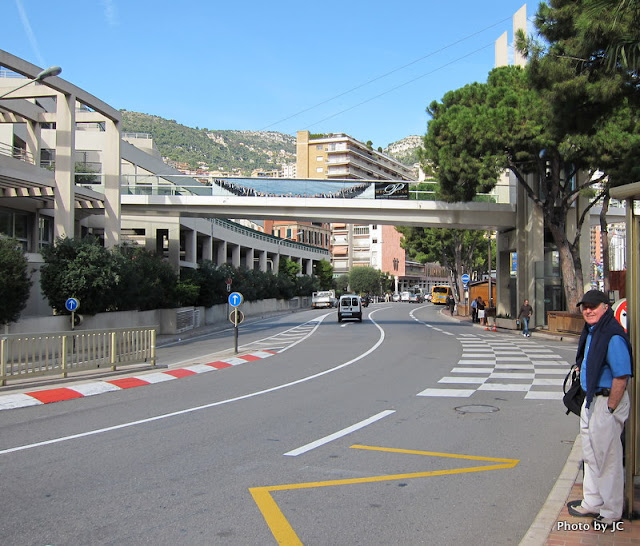 Yours truly, enjoying Monte Carlo on a sunny day in 2010, whilst cruising the Mediterranean on the Queen Victoria - now that's a great way to see the world!

Mark Webber winning the 70th Monaco Grand Prix on May 27, 2010 - just 31 years after I was fortunate to be able to watch another great Australian driver compete in Monte Carlo.
Great stuff!