The news just in! Alfa Romeo will develop a dynamic new Spyder sports car, using the Mazda MX-5 as the foundation. What ?!?!

The MX-5 is undisputed leader of the sports car ranks, in dynamic and image terms and it's going to be the basis of a new Alfa Romeo! Great! If you can’t beat ’em, join ‘em.

I think this is a very sound decision and makes perfect sense. The plan was canvassed in an excellent story in Fairfax Media’s DRIVE section, written by my good friend, Peter McKay.(See Link below)

The Alfa Romeo division of the giant FIAT car company has always been something of a poor relative in recent times. It has had just enough investment to maintain an exciting model range, and produced some great cars of late - the 147, 159 and Brera.

However, from the standpoint of commercial success, it has struggled to be profitable, because it’s a niche brand, with a relatively small fan base.

FIAT recognizes that Alfa Romeo is a powerful, emotional marque, with a distinguished history and image, and certainly doesn’t want to discard it. But, how do you justify continued investment on a brand which doesn’t sell enough cars, and yet demands integrity of design and engineering?

As happened with the current 159, you ‘borrow’ a complete platform from either another car in your portfolio (EG: Golf/Audi A3/Skoda Octavia), or in the 159’s case, another car manufacturer.

The 159 is built on a platform which GM Europe originally planned for Vauxhall and Saab, but neither company opted to use it, and in the middle of the brief GM-FIAT marriage, FIAT simply ‘told’ Alfa Romeo division that this would be the platform for the successor to the 156!

The Spyder version of the Brera is a good looking car, but this Giugiaro-designed model will soon disappear, and thus we now hear about the plan to build a new Spyder on the Mazda MX-5 platform.

I can’t wait to see it - that is, providing Alfa Romeo gets someone other than the design team at Centro Stile to create the shape.

The 159, Brera and Spider were all done by Ital Design, but now that company is owned by Volkswagen AG, it seems unlikely it will be asked for new design ideas.

The danger is that Centro Stile’s efforts on the horrible MiTo and Guilietta (two forlorn, and sad-looking cars; with their ‘bug’ eyes staring down the road) may be visited on the new Spyder. Aach!

Alfa Romeo could do worse than embrace the concept car developed by Pininfarina for the 2010 Geneva Salon. 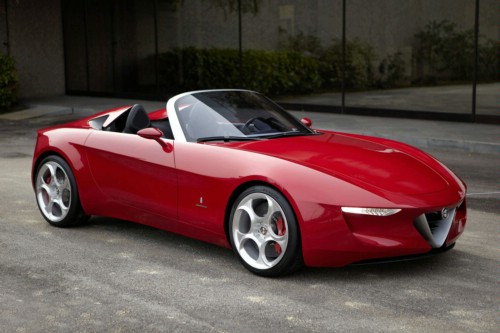 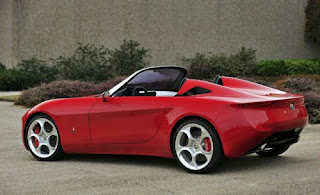 Called, the 2uettottanta, the car looks every bit like all of us Alfisti would imagine a new Spyder. I guess the strange alpha-numeric name is supposed to embrace the word Duetto, meaning twin - for the two only seats. 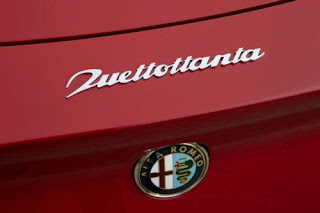 Whatever happens, looks like FIAT's Sergio Marchione, may be clever enough to keep Alfa Romeo alive and well. Even if it does mean 'borrowing' a platform. Smart thinking Sergio - keep costs down, keep the name alive!

Mazda MX-5 photos by Thomas Salt. Tom Salt is a freelance photographer born in New York, educated in England but now living near Lübeck in Germany.

Posted by John Crawford at 2:23 PM