It was mid 1976 and a supercharged, young, Sydney entrepreneur called Gabriel Szatmary had put together a dream ticket for the upcoming James Hardie 1000 touring car race on the Mount Panorama circuit at Bathurst in western NSW. 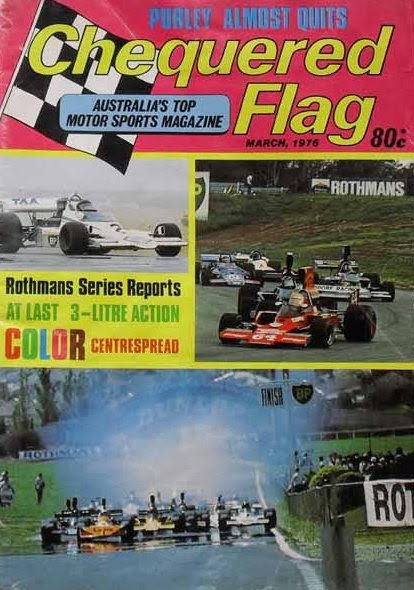 Somehow Gabriel, the owner and editor of Chequered Flag magazine, had pulled together Stirling Moss and Jack Brabham, plus jeans company, Blues Union, and Sydney’s Number One pop radio station 2SM, and paired them in the hot racing sedan car of the period, a Holden Torana L34. This was going to be fantastic! 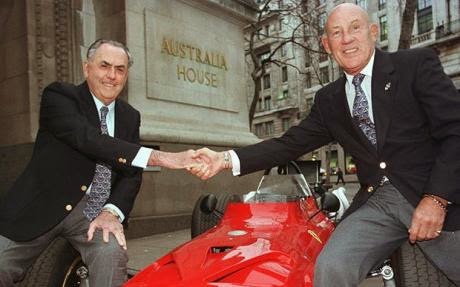 The pairing might not be racing for a win, up against some of Australia’s most seasoned touring car drivers, but the team was sure to score most of the media spotlight when they came to town. 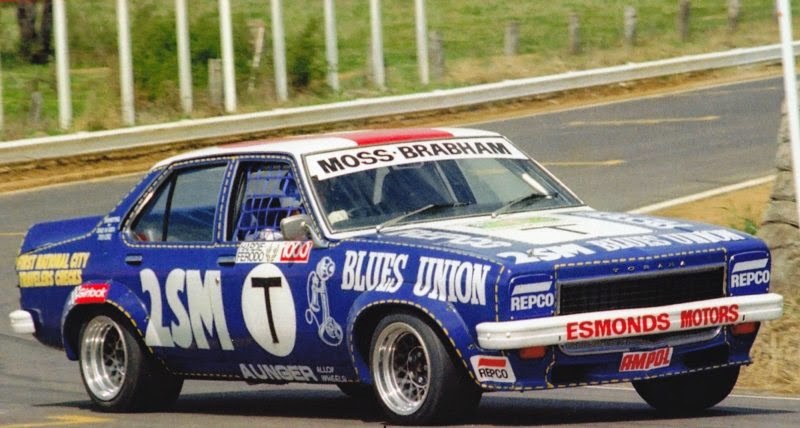 I met both the drivers, whom I already knew, at a pre-race reception in Sydney, arranged by the radio station, when the powerhouse behind 2SM, radio guru Rod Muir, asked me if I would call the race for the station and its audience?
Would I? You bet!


At the time I was the Editor of the monthly car magazine, Modern Motor, and this would not be just great publicity for 2SM and Blues Union, but also the magazine.

On the Friday night before the race, Blues Union arranged a BBQ in the grounds of a teacher's college, immediately adjacent to Forest Elbow, the dangerous left hand corner at the bottom of the descent from the mountain.


Needless to say, every man and his dog scored an invitation (well, maybe not the dog!) and the sausages and steaks sizzled away on the grill, whilst a lot of beer was consumed by the guests. Both drivers stayed with orange juice!

The party started around 5pm, but being late September it was dark by 6:30 and the organisers had not arranged any lighting. So we were all illuminated simply by the BBQ fires. Jack (the engineering type) departed early to check on the car, but Stirling was (as usual) in deep conversation with two very attractive teachers from the college.

As he was enthusiastically chatting them up, his knees appeared to buckle and down he went! The girls dashed forward in the dark, in case the famous Brit had suffered a heart attack or something equally dramatic two nights before the big race.


The explanation was a lot simpler. In the dark Stirling had been nudged behind the knees by Harry, the tame, hairy-nosed Wombat who lived in the school grounds. If there were sausages around, Harry wanted some, so he just nudged the person closest to him who was holding a sausage sandwich, and that happened to be Stirling Moss.


In the pits on Saturday morning Stirling, who is a great animal-lover, couldn’t wait to tell Jack about his nighttime encounter with the local fauna, when Jack laconically replied: “That’ll teach you Stirl, you have to always watch your back.”

Sadly, next morning at race start, those words were to come true for Jack Brabham, who it had been decided, would take the first stint in the car.


As the cars at the front of the grid raced away around Hell Corner and up Mountain Straight, the clutch gave out on the Blues Union/2SM entry, and with no gears Jack remained stationery. It was then the car immediately behind him, which had launched itself off its starting spot, unceremoniously rammed into the back of the Torana.


And, that was that!

Calling the race live for 2SM from the roof of the control tower, I was frantically trying to identify the leaders who were heading out of my sight up Mountain Straight, when I had an exasperated Rod Muir in the radio station studio in Sydney yelling in my headphones: “Where’s our bloody car? You haven’t mentioned it once! Where’s OUR bloody car?”


Even though my gaze was fixed on the head of the pack racing up the mountain, via my peripheral vision I had spotted Jack’s collision, and until there was something positive to say, I decided to omit any mention.


Finally, when it was clear the Torana wasn’t going anywhere I broke the news to Rod and the 2SM audience. At that moment I was glad I was at Bathurst and not at the radio station – because an irate Rod Muir was something to behold!


Eventually, officials dragged the car back to the pits and over the next couple of hours repairs were made so that the car could circulate for the remainder of the race, and at least score some TV time.
However, that was not to last either, as the engine blew itself to pieces while Stirling was at the wheel.


We all ended the day in the sponsors tent drowning our sorrows, but Jack was philosophical and said to us all: “That’s motor racing, some you win, some you lose.”

You can see the sad developments of the start in this YouTube clip posted by the Torana Car Club:

http://www.youtube.com/watch?v=RLJJFb-OBUc
Posted by John Crawford at 11:55 AM