The development of the Alfa Romeo Giulia is almost as complex, convoluted and surprising as the takeover of Chrysler by FIAT SpA and various decisions driven by FCA leader Sergio Marchionne. 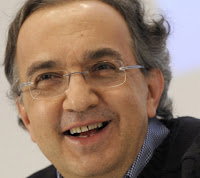 Sergio Marchionne had been appointed CEO of FIAT SpA in 2004, taking over a company where every division, except Ferrari, was struggling. Sales were diving for all the brands; R&D budgets had been slashed; the platforms and powertrains were old, and FIAT was giving a solid appearance of sliding down the nearest drain!

In 2011, when FIAT SpA acquired 53.5% of Chrysler, Marchionne was named Chairman and CEO of the merged company, called Fiat Chrysler Automobiles (FCA Group).

Marchionne quickly identified the problems faced by FCA Group, but as not only Chrysler’s, but FIAT’s funds for capital spending were limited, the only way out of the mess was massive borrowings. Even today FCA Group’s net debt stands at USD$6 billion. 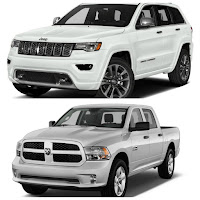 At the same time as Marchionne was indulging in hocking FCA as loan collateral, he was also actively seeking a takeover of FCA by a bigger group. One approach was turned down very publicily, when GM Chair, Mary Barra, issued a press release fending off Sergio's blunt approach.

Because of profits from Jeep, and RAM truck brands, Chrysler was managing to ‘wash its face’, but there was precious little to be spent on totally new cars, so it was managing with a very tired range of Dodge and Chrysler models - the only bright star being the 300C.

The 300C was designed around an ageing Mercedes-Benz platform, but its aggressive stance, bold design and blistering acceleration of its high performance SRT version managed to boost sales of the whole range to a healthy level, allowing Chrysler to remain in the public eye, as one of America's Big Three.

In 2012 Marchionne turned his attention to Alfa Romeo, and by June 2013 he had signed a deal with Mazda, to make an Alfa Romeo Spider based on the forthcoming MX-5, and built alongside the Japanese sports car in Hiroshima.

However, by late 2013 everything changed. FIAT dealers were crying out for something new to sell, besides the wildly successful, but low profit-Fiat Cinquecento, and Marchionne had come to the conclusion that continuing to produce Alfa Romeos derived from ageing FIAT platforms was never going to fully capitalise on the potential which the famous Milanese brand promised.

At that point, Marchionne pulled off an amazing switch – telling Mazda that the new sports car would be badged as the FIAT 124 Spider, with an Abarth spin-off version.

He announced that “some things come from a special place, and Alfa Romeos must be built in Italy.” 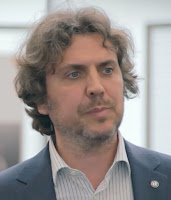 I’m indebted to the Head of Exterior Design for Alfa Romeo, Alessandro Maccolini (left), Head of PR for Design, Francesca Montini and Historical Services Manager, Marco Fazio, for their support for this story.

In parallel with the decision to switch the sports car to FIAT badging, initial studies had already begun at Alfa Romeo Centro Stile in Torino on the successor to the Alfa Romeo 159. 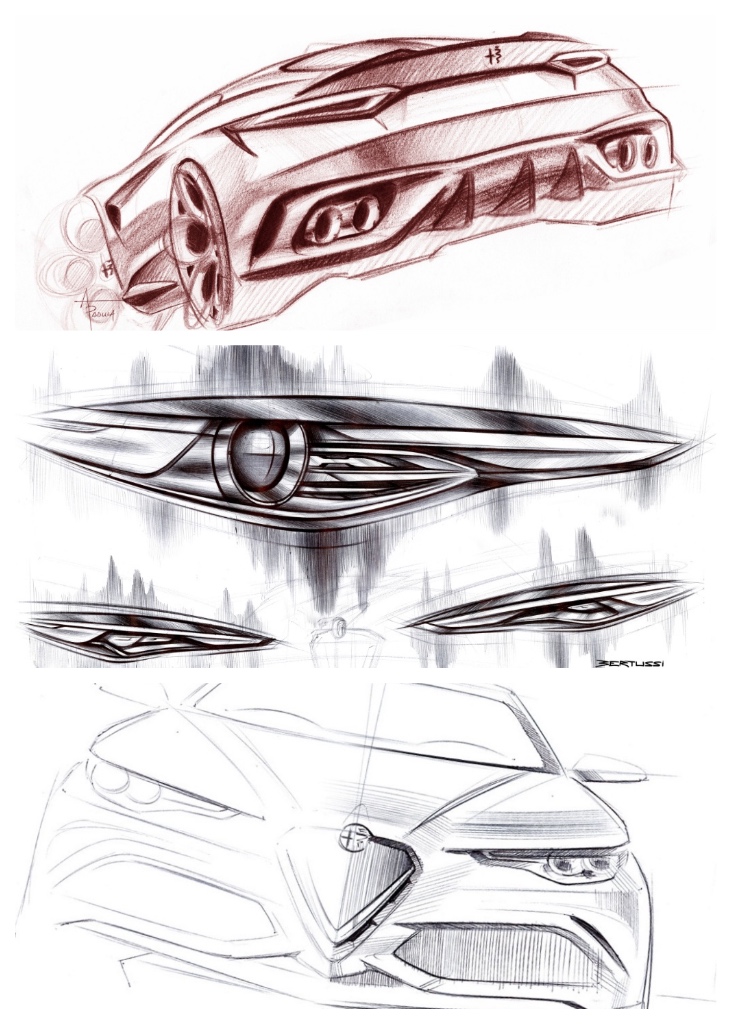 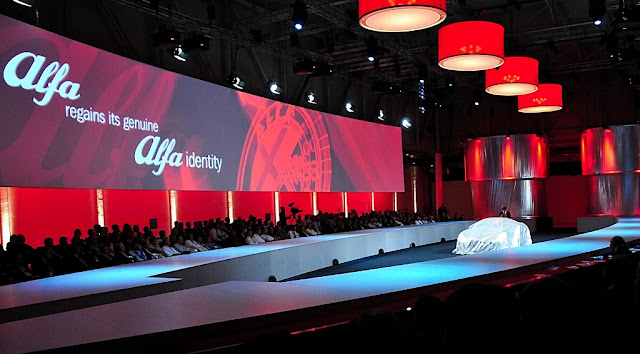 Those efforts were boosted significently when Marchionne announced in June 2014, at a huge business meeting in Milan, that FCA Group would invest €5 billion in the Alfa Romeo division, developing unique platforms and powertrains, which would essentially spawn eight all new models.

Alfa Romeo was to become a ‘Premium’ brand, and the plan was to return Alfa Romeo to its glory days powered by sexy, agressive styling, with stunning performance and handling. The green light had already been given to Alfa Romeo’s then Head of Design, Marco Tencone (below) in June 2013, to begin design discussions with the exterior team, led by Alessandro Maccolini. 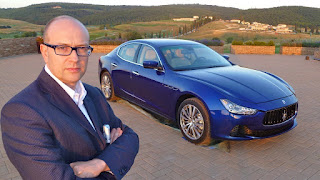 Tencone himself has excellent design credentials, as the designer responsible for the Maserati line, including the striking Alfieri concept.

Since the Tipo 939 (159) had ended production in 2011, it was imperative not only to move quickly on design proposals, but also ensure visual connection with the brand’s contemporary themes. 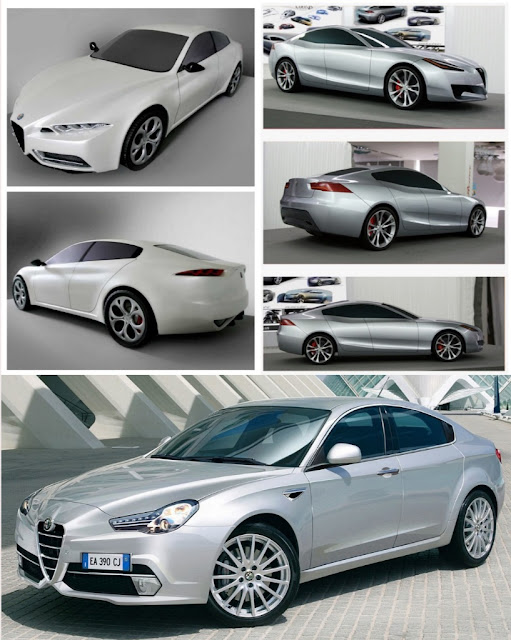 Naturally of course, between 2010 and 2014 many designers, both amateur and professional, plus car magazine editors, and design schools, had filled the vacuum by producing a plethora of design ideas for the new sedan.

The internet was deluged by what appeared to be very real-looking computerised images, clay models and design sketches, all purporting to be the ‘new’ Alfa Romeo sedan.

This included what looked like an obvious candidate, which was actually a study by design students studying for a Masters' degree, and in effect was pure fantasy.

Maccolini tells me that the work on the new Giulia (Tipo 952), was the most secret project he had ever worked on, during his 20 years with the marque.

He says that right up until the day Giulia was revealed in Arese ‘nothing at all had leaked to the internet or car magazines’. The new car was a total surprise. 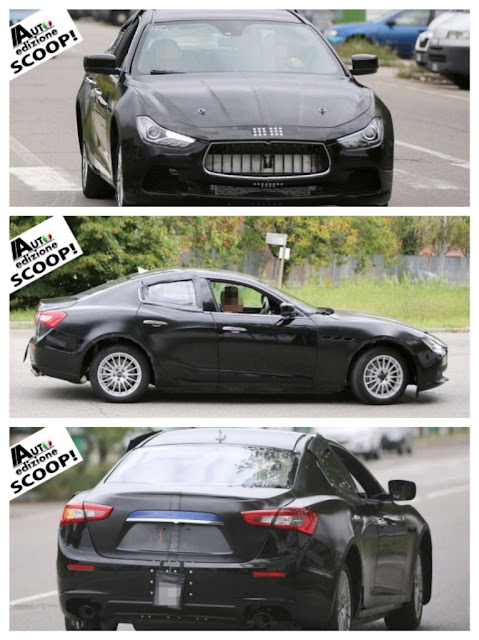 The surprise element was also helped by disguising the road-going prototypes with cobbled-up Maserati bodywork and false logos, which completely confused the scoop photographers hovering outside the Balocco Proving Ground, and patrolling autostradas around Milano and Arese.

Italy's Auto Editzione, did capture a complete portfolio of 952 prototypes, however the apparently ‘clumsy’ disguise revealed nothing of the beautiful shape hidden from view.

Alessandro tells me two distinct themes were selected, and were developed into 1/1 scale clay models, after design moved from tape drawings and mathematics between December 2013 and February 2014.

The final model, which sits on the new ‘Giorgio’ platform, was ‘more or less’ approved by Marchionne in September 2014. The ‘more or less’ description is because the Giulia was designed first as the Quadrifolglio, and because the styling and final design was defined by various technical and aerodynamic solutions that were meticulously matured throughout the entire development process. 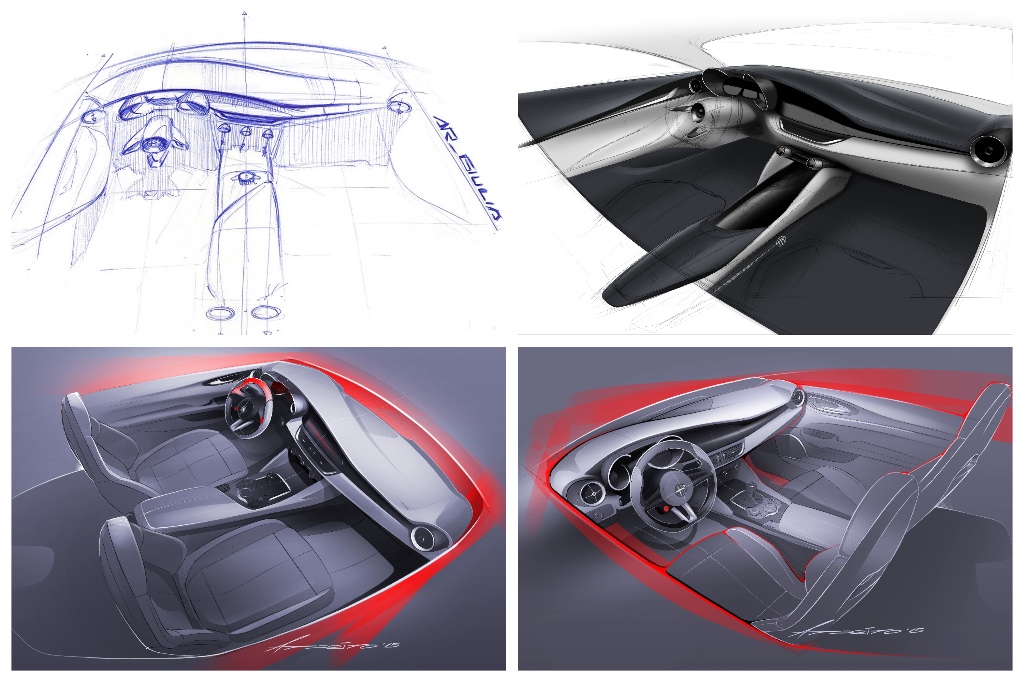 Needless to say, ideas and innovations adopted for the Quadrifoglio flowed on to the mainstream models. 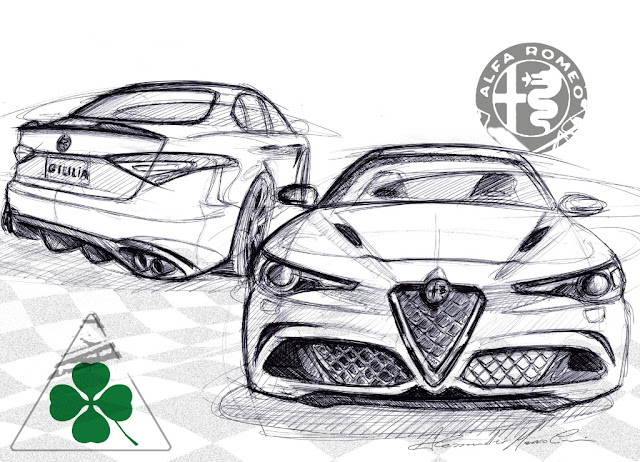 We should also not forget the early influence on the project of Marco Tencone, who has now been replaced by American Scott Krugger, who moves to Centro Stile from the Dodge Viper and R/T design centre in Auburn Hills, Michigan.

The technical direction and development of the powertrain, platform engineering and suspension was managed and overseen by Ferrari’s Technical Director (and secondee to the 952 team), Philippe Krief.

Testing at both Balocco and Fiorano ensuring tight security was maintained.

As we now know the Giorgio platform underpins the new Stelvio SUV, and will also be the basis for Alfa Romeo’s next new model, a replacement for the Giulietta.

The whole of Alfa Romeo Centro Stile should be justifiably proud of the new Giulia. Its design and visage has been applauded around the world, including rival designers, manufacturers and the automotive media.

Posted by John Crawford at 2:22 PM