MAGIC AND MILLIONS AT MONTEREY (and not all of it cars) 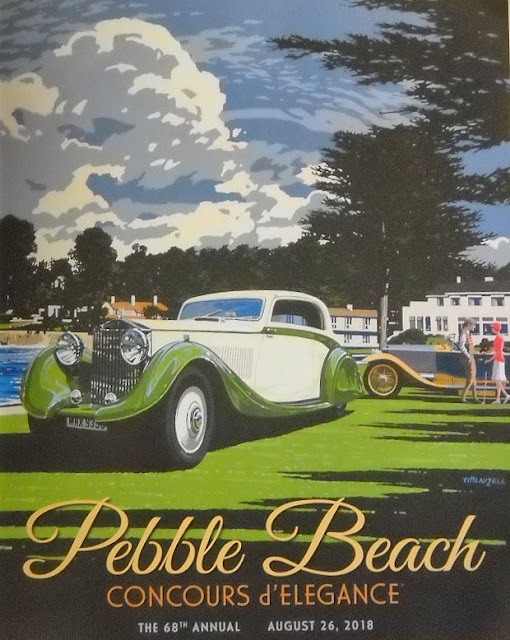 In the 68 years since the very first Pebble Beach Concours d’Elegance, literally millions of people have flocked to California’s Monterey Peninsula every August, to celebrate centuries of the art, design and engineering of the motor car.

The activities on the third Sunday in August on the 18thhole of the famed Pebble Beach Golf Course have led to the growth of a number of similar events which have grown up around the Concours, simply because of the diverse nature of the world of the automobile.

Most of these events also are now institutionalized into the August calendar and add to the variety and splendor of what is undoubtedly a car enthusiast’s complete delight.

Although the management of the Pebble Beach Concours is somewhat rankled that these events have piggy-backed off the popularity of the Concours, over the years it has learned to co-exist with the ‘upstarts’ who cashed-in.

However, despite the fact that these additional events have now become ‘must see’ attractions, there remains a problem of crowd control. Monterey has become so popular it is almost in danger of being swamped by its own success.

Here’s the calendar for the week preceding the Concours:

This event is staged at the Monterey Jet Center at the southern end of the Monterey Municipal Airport, by Gordon McCall. McCall is a genial, smart, self-made man who made his money from creating a business around car care products. His smart and savvy wife, Molly, works right alongside him managing the major features of each year’s event, ticket sales and promotion.

All the hangars are cleared, and the space fills with cars old and new, often collected under a general theme, plus the latest in private jets and even planes from the US Air Force and the US Navy. It’s a tech-heads delight, but there’s a limit to just how many attendees this large space can comfortably accommodate and tickets usually sell out with 48 hours of going on sale.

Friday: The Quail, A Motorsport Gathering 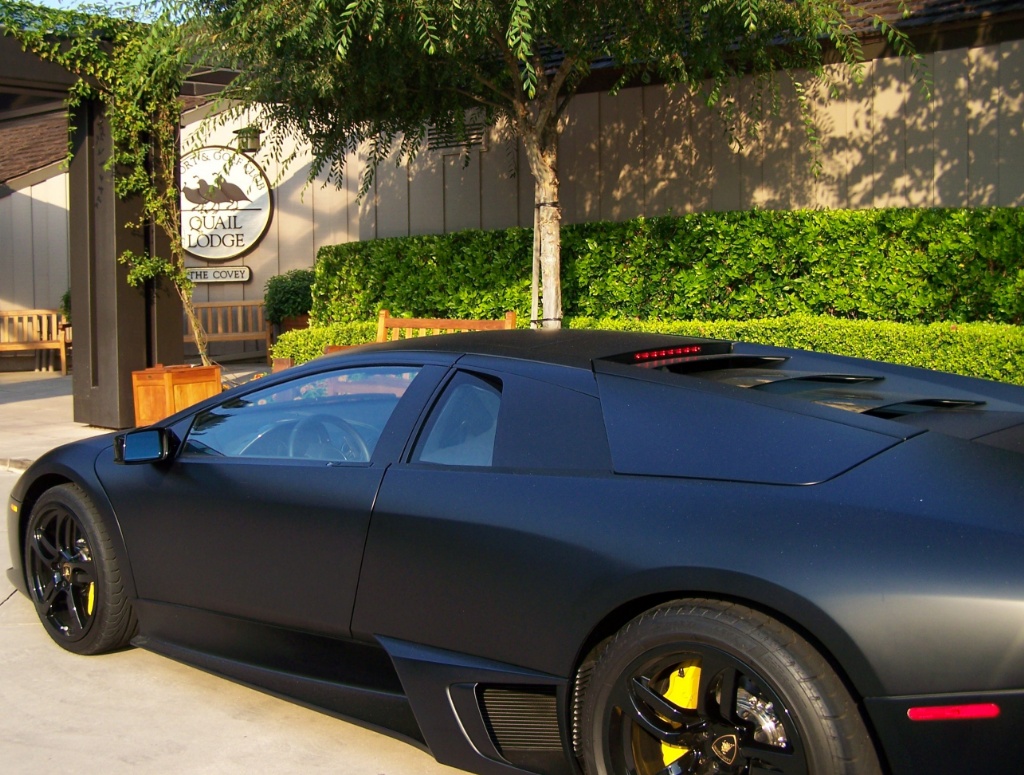 A well-known and respected car enthusiast in his own rite with collections all over the world, Sir Michael wanted an event which would become famous not only as a celebration of motor sports over the decades, but also something of a strolling feast for the eyes and appetites.


To envision, and create the event Sir Michael turned to his good friend Gordon McCall, who conjured up probably the most enjoyable of all the Monterey events, with the exception of the Concours.

I guess you could call these two wealthy car enthusiasts, a power couple.

Quail Lodge and Golf Club is part of a huge estate which includes multi-million dollar luxury homes on large bushland lots just off the main road which runs through the beautiful Carmel Valley. 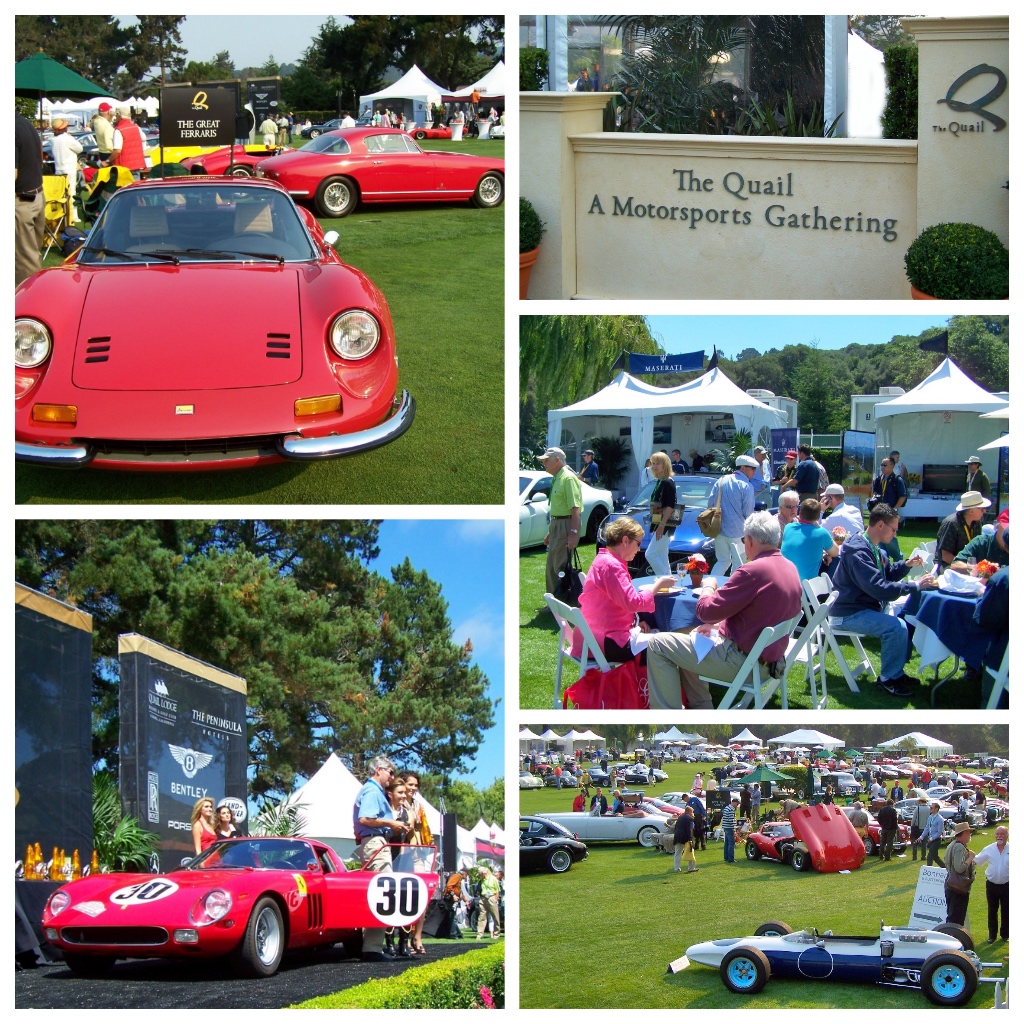 The event is held on one half of the Quail Lodge golf course, and the displays, live music, cars and various libation stations are randomly spread across the carefully manicured lawns. A variety of restaurants and wine makers vie to be chosen to set up their ‘stalls’ which offer a wide range of food and drink to the patrons, at no cost – it’s all part of the ticket price.

But, here’s the rub. When the first event was staged I was responsible for introducing the Bentley marque as a ‘foundation sponsor’ and Gordon McCall told me the secret of the event would be to limit the number of people who could attend – so that there was no pushing and shoving, and the attendees could have a relaxed day among cars, wine, food and fellow enthusiasts. So, to that end, the first event was limited to 2000 attendees.

Such is its popularity, this year the number was increased to 3000, but the individual ticket price is now USD$400. They sell out within 24 hours of going on sale.

The ‘Best in Show’ at this year’s ‘The Quail’ was a 1953 Lancia Aurelia PF200C Spider – a prototype concept car based on the Aurelia B52 chassis but with coachwork by Pinin Farina. 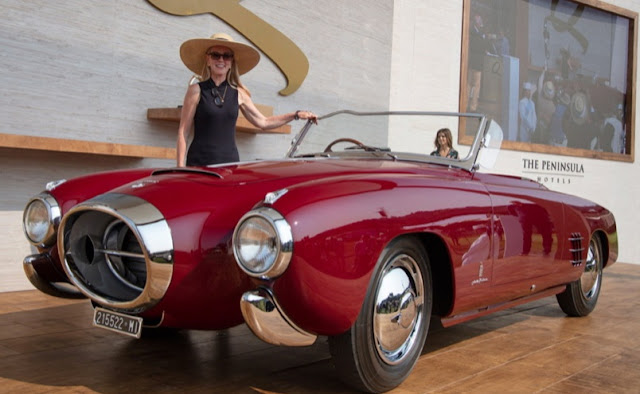 This was the very first event which co-existed with the Concours, and is held at the Laguna Seca race circuit just a few miles east of Monterey. It has an annual theme, historic marques are featured and the entrants truly ‘race’ their cars. There’s no pampering of delicate old machines, they race flat out for the trophies and ribbons.

Like most race meetings it’s conducted over Saturday and Sunday and for most of its life was run by the very friendly, outgoing and highly-respected ‘creator’ – Steve Earle and his wife Debbie (who have since retired). 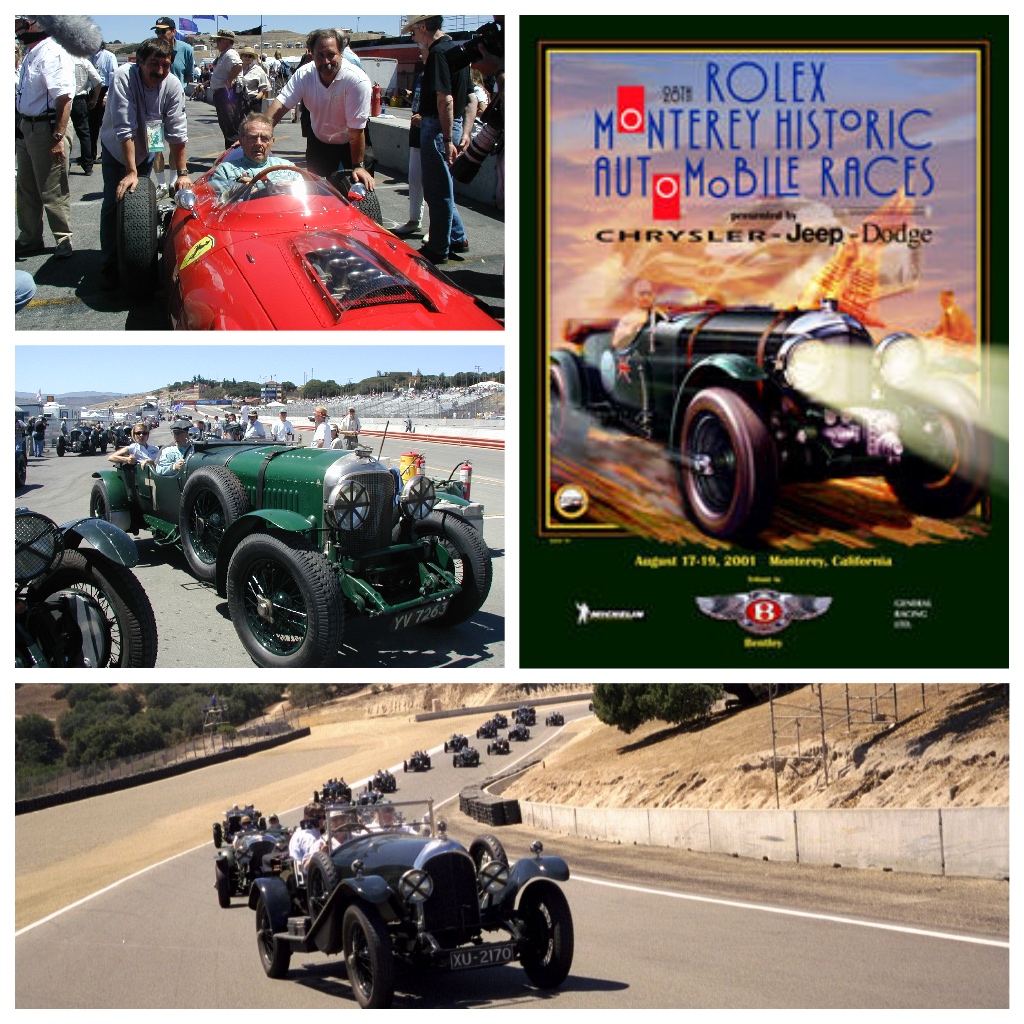 The main reason for its existence was that back in 1952, when the first races were organized on the Monterey Peninsula, they were held on the public roads, on what is now called the ’17 Mile Drive’ – a route which is now packed with tourists gazing at multi-million dollar homes, seaviews and luscious golf courses. 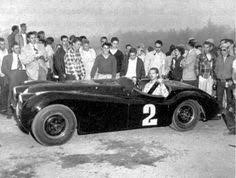 That first event was won by a young Phil Hill in a Jaguar XK120 (right).

When the Laguna Seca circuit was created, the Pebble Beach races were moved to this ‘safer’ location. 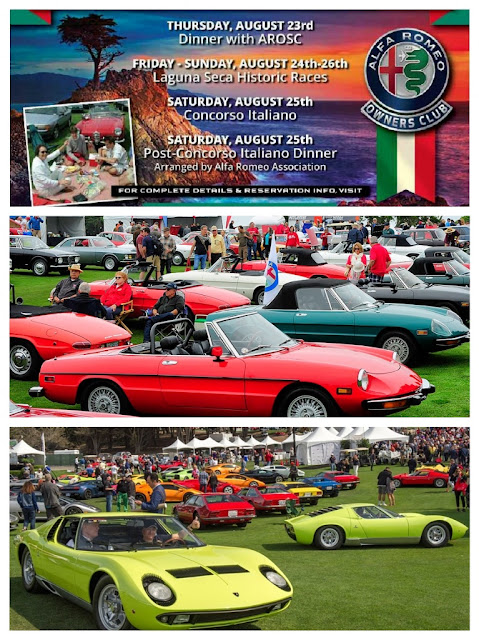 Obviously this is where the Italian car enthusiasts gather.

The event has had its ups and downs over the years, changing owners from its original creators, struggling financially, but it’s eagerly supported by Italian car nuts and is now also an institution.

It celebrates its 33rdbirthday this year, staged on the beautiful Black Horse Golf Course, to the north of the city, and caters for all of the specific  ‘Italianess’ which is a huge part of the automobile scene, but may not necessarily be featured every year by the other events.

Similar to ‘The Quail’, it’s a strolling experience amongst Ferraris, Lamborghinis, Alfa Romeos, De Tomasos and some of the lesser-known and exotic brands which Italy offered over the centuries. 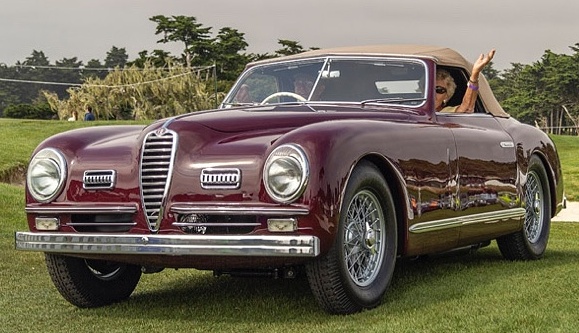 Undoubtedly, it is still the premier event on the Monterey Peninsula and has a unique flavor, Firstly, ALL of the cars which are entered for judging on Sunday must be capable of being driven and there are two road events which entrants can enjoy, which add points to their pointscore tally on Sunday during judging. 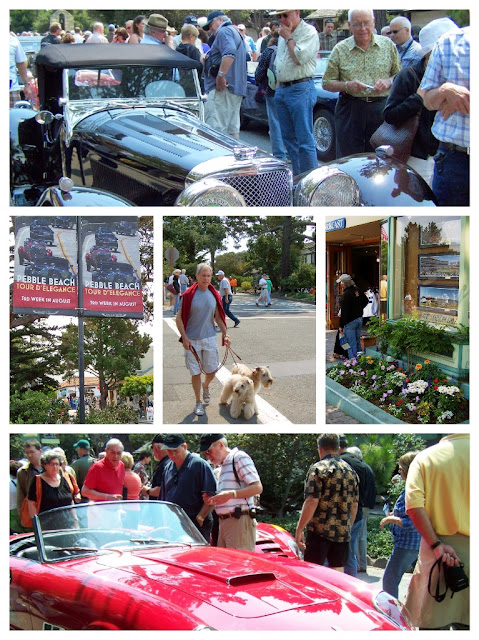 One is the Pebble Beach Grand Tour, which starts from Seattle, and finishes in Monterey on the Thursday prior to the Concours.

The other driving event is the ‘Tour de Elegance’, a shorter tour staged on Friday, which utilizes parts of the ’17 Mile Drive’ and ends in the main street of Carmel – which is closed to traffic on Friday morning.

It's an eager public which gathers to look at the cars, for free, as they park up in Carmel-By-Sea.

This ensures that the cars you see on the 18thhole on Sunday, are not ‘trailer queens’.

They have been fully restored and must run perfectly, to be accepted by the Concours selection committee. 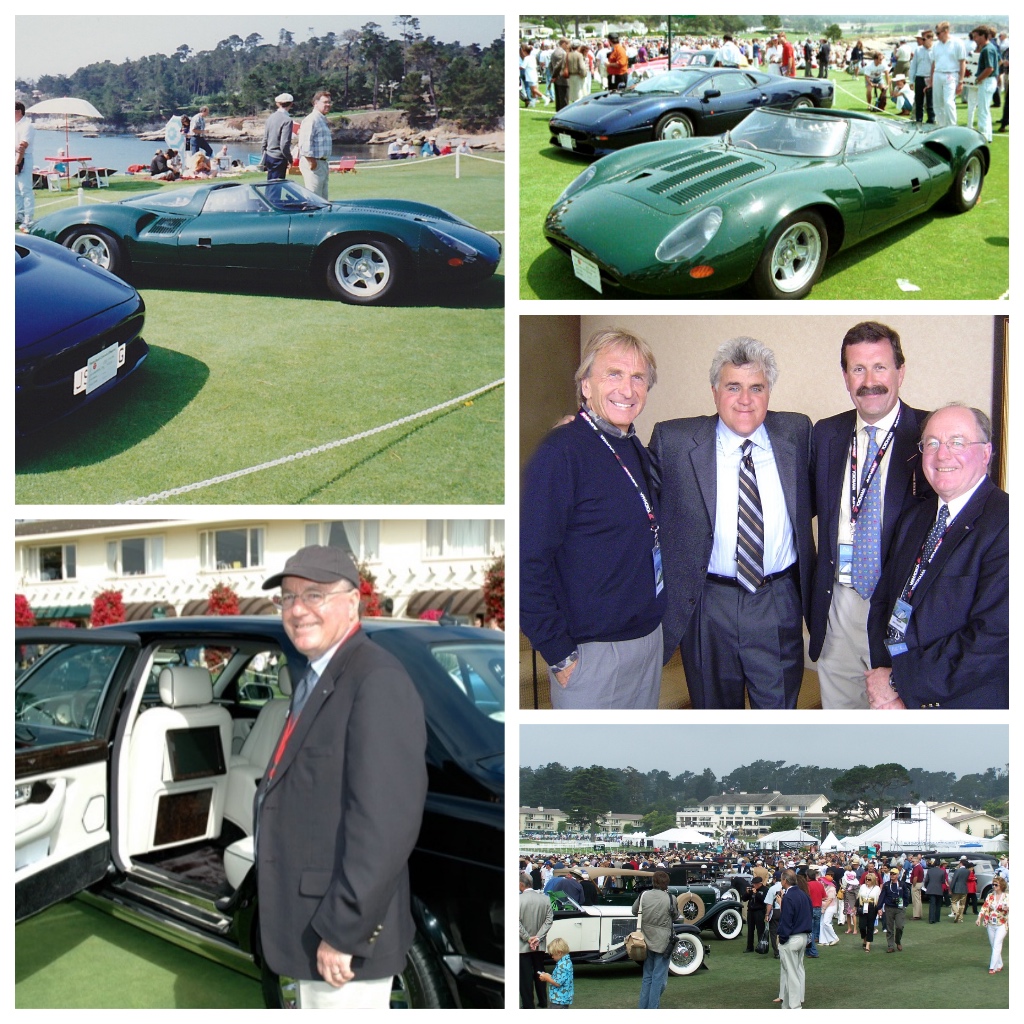 Each year there are featured marques, and in 1992 when I was head of public relations for Jaguar, we were chosen to star; and a few years later when I held the same position at Bentley Motors, we enjoyed the spotlight of fame at ‘PB’. It is was here we launched the Bentley Mulsanne. 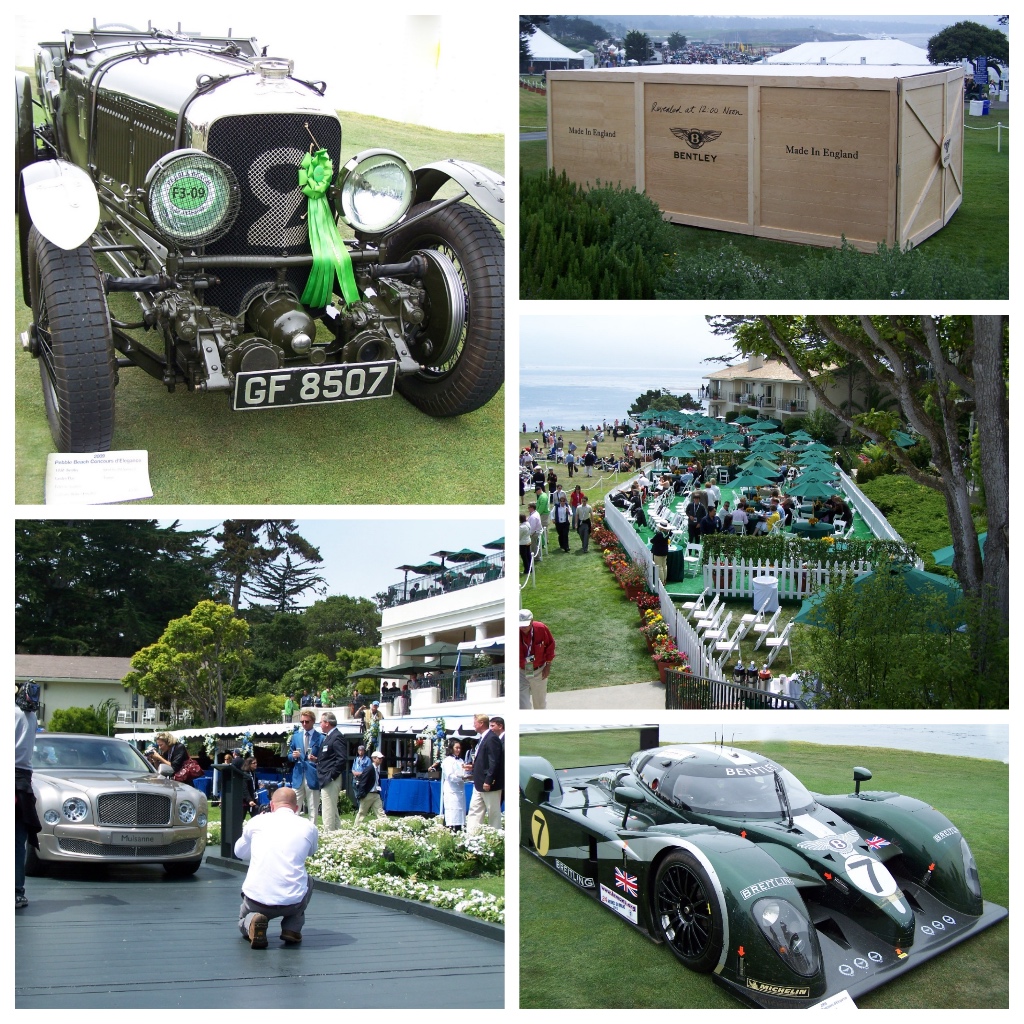 I very much value my long-standing connection with the Concours and my friendship with the previous Chair of the event, Glenn Mounger and the current Chair, Sandra Button – both now close friends. 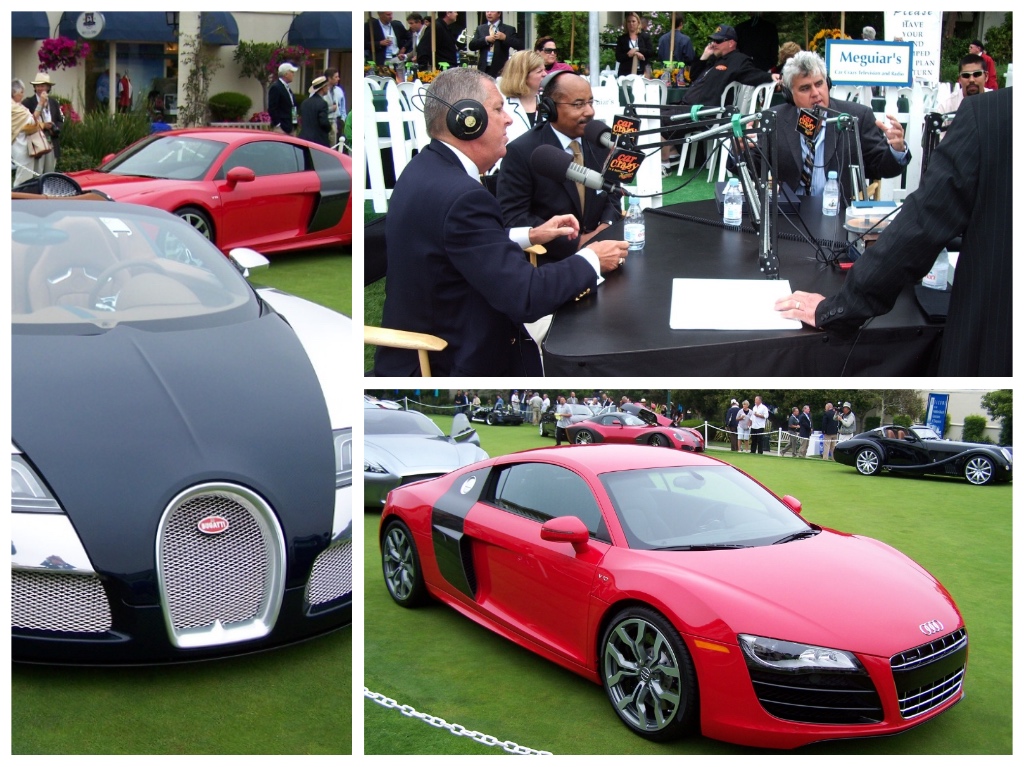 The Pebble Beach Concours has not only become THE event in Monterey, but especially so for the global car industry. It is supported by every major car company, which hosts visitors and corporate guests in their own lavish suites.

In addition, many car companies vie for a place on the ‘Concept Lawn’ where they display future concepts, or classic concept cars from the past.

However, there’s much more to the Pebble Beach Concours than just glamorous cars and glamorous people. It was decided back in 1975 to establish The Pebble Beach Company Foundation, with a mission to provide the youth of the Monterey Peninsula with the building blocks of success, starting with literacy and education. Funds raised by the Concours assist more than 80 local charities.

In 40 years the Pebble Beach Company Foundation has raised more than USD$25 million, and it’s worth noting that many of the events which have grown up around the Concours also contribute to a range of local charities.

This year 209 vehicles appeared on the field on Sunday; the crowd on the 18thhole alone was estimated to be in excess of 15,000 (although that number could be much more counting support staff, corporate employees and assistants); and for 2018 the event raised over USD$1.8 million for charity.

The car chosen as ‘Best in Show’ was a 1937 Alfa Romeo 8C 2900 B with a coupe body by Touring of Milan (now called Touring Superleggera of Milan).

I first visited the Monterey Peninsula in 1991, and have attended ever since, and along with the Geneva Salon, is the only other annual event that counts on my bucket-list these days.
Posted by John Crawford at 12:57 PM