It’s August 2010, and I’m heading to the USA for the annual automotive festivities on California’s Monterey Peninsular, which includes MotorWorks at the Monterey Executive Jet Airport; The Quail ‘A Motorsports Gathering’ at the Quail Lodge Golf Course; the Monterey Historic Races at Laguna Seca; and of course the Pebble Beach Concours d’Elegance – the world’s most fantastic annual tribute to automobile history!

The trip takes me from Brisbane to Los Angeles, then a short commuter hop to San Francisco. Sounds simple, but co-ordinating and catching the flights, along with the inevitable air traffic delays in American skies is a pain in the backside.

Also, the dreary landscape of the long term parking lot near San Francisco Airport is hardly a location to glamorize an automobile described by its maker as a four door sports car - which is how Nissan North America labels its latest Maxima. 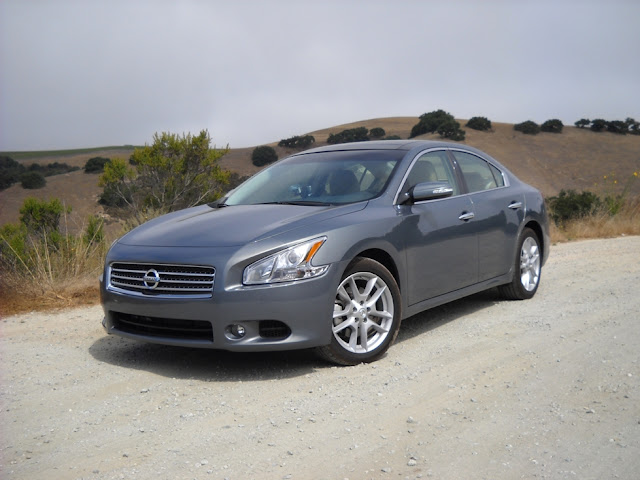 Settling into the bumper to bumper stream of southbound peak-hour traffic on Highway 101, you just get to take in the interior view, and quickly come to grips with the comfort and convenience features in this smart, compact car.

Splitting from the inland freeway to join the fabulous Skyline Drive, we hit the coast at Santa Cruz. There’s time to stop for a Starbucks coffee (yuk!), and study the exterior as we pause by the Pacific Ocean. Immediately the word ‘sculpted’ comes to mind, and this latest version of the US Maxima certainly looks a whole lot more visually interesting than the rather bland version we get Down Under. 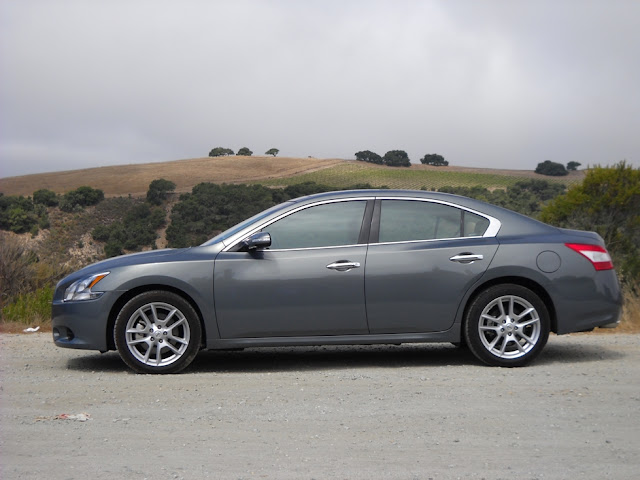 In fact the American Maxima is a pretty snazzy-looking car.

Nissan’s Maxima has been its mainstay in the hotbed of the American medium car market since it debuted in 1976, based on the ‘Bluebird’ platform, and in fact was called the Bluebird 810. It was a pretty ordinary front-drive-wheel sedan with a two-litre four cylinder engine, and it was also a pretty ordinary drive too. Talking of ordinary, Toyota’s competitor, the Cressida, was a car that gave ‘bland’ a bad name. Distinguished it was not! However, by 1984 the Maxima featured a V6 engine, and a fresher-looking exterior and interior styling job, but the first serious makeover came in 1989, when it was launched in Europe and Australia.

In 1995 the Maxima in Australia and the USA became a V6 only model, and sales began to increase.

After a number of facelifts engineered in Japan, Nissan North America won the right to redesign the Maxima for its own market, and in 2000 a new model, designed at Nissan’s La Jolla studio in California was born, resulting in two different Maxima model lines. The US model shared its platform with the smaller Nissan Altima and Murano SUV, whilst the Australian Maxima sat on the existing platform, and continued to be sourced from Japan. 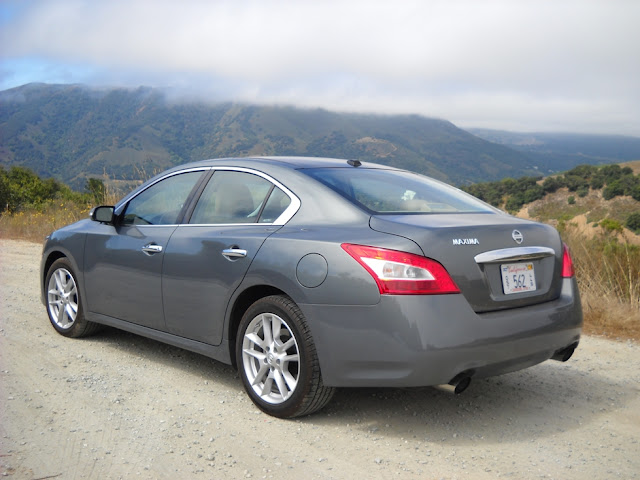 The most recent restyle of the US Maxima has been dramatic and well-received in the American marketplace. However, styling-wise it’s a bit of a three card trick. The car sits on the same underbody dimensions, but the ‘sculpting’ of the external panels has given it an apparent greater substance.

It’s significantly wider than the previous model, but the interior package remains the same. It’s not ‘squeezy’, but not as generous inside as some of its competitors, nor its exterior shape might suggest.

However, in equipment terms the Maxima is a class leader. The standard car comes with iPod/MP3 connectivity, SatNav, Bluetooth and a great stereo, with Bose speakers. The transmission is one of the best-developed CVT types I’ve tested, and the Maxima even has steering column-mounted transmission paddles! 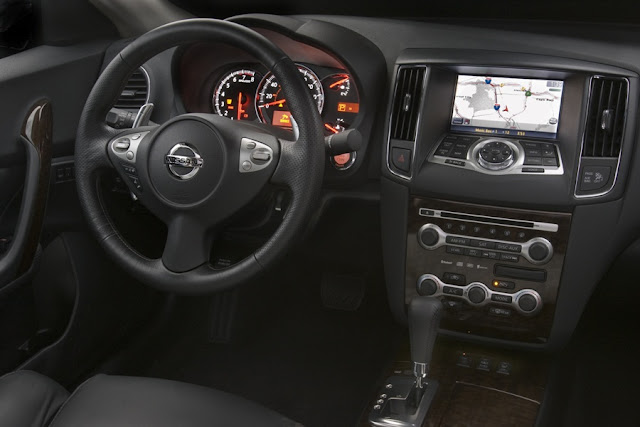 The transmission is very smooth in operation, and most drivers would be unaware they were driving a CVT-equipped car. Whilst the change is nowhere near as fast as a twin-clutch type, it performs admirably when driven on the ‘paddles’.

Nissan seems to have achieved its aim, in separating this car from its (mostly) Japanese competitors, and endowed it with a powerful and quite frugal V6, the snappy CVT transmission, excellent ride comfort and passably good handling.

The US Maxima still exhibits more understeer than I’d like, but it’s very responsive and the rack and pinion steering has quite good feel, thanks to a very ‘fast’ steering box ratio.

After taking in the auto festivities in Monterey and Pebble Beach, I headed east along Route 68 and then across to Highway 101 South. This freeway is the main (and most direct) link between LA and northern California. Leaving Highway 101 just north of Santa Barbara I climb into a mountain range, and pass through the village of Solvang, which is one of those backwoods oddities you find sprinkled around the USA. 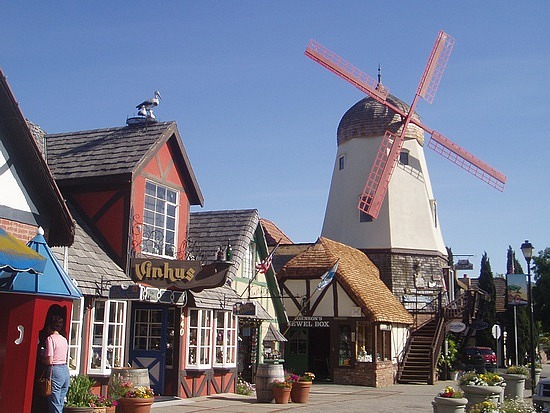 Solvang is what you might call ‘Little Denmark’ and is populated by Danish settlers who began arriving in America between 1896 and the early 1900s. Solvang was established in 1915, and the restaurants, cuisine, architecture and customs have created a pocket of Danish culture high in the hills of the Santa Ynez mountains. 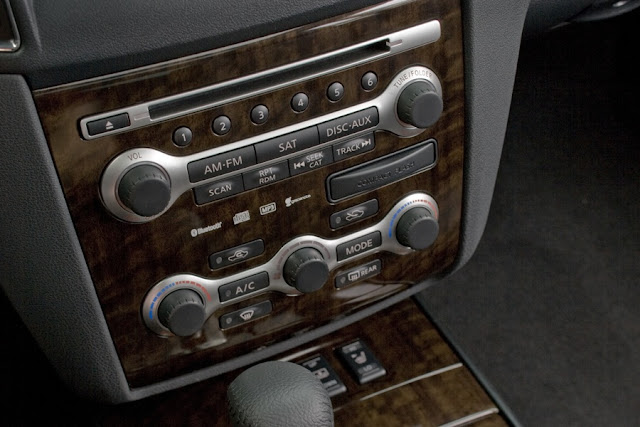 Using all the standard equipment gear like SatNav, Bluetooth and the iPod connector is easy, intuitive and very welcome - there are no mysteries to befuddle the pilot, whilst concentrating on driving. The drive south heading towards Los Angeles along Highway 154 is just the right sort of road to test the “Four Door Sports Car” and the Maxima did not disappoint. There’s no point comparing this car to a dedicated sports sedan like a BMW 5 Series, or an Audi A5, but the Maxima points precisely, performs well, rides comfortably and inspires confidence.

The suspension is very well sorted, and the secondary ride quality is outstanding for a Japanese-designed car. Rarely have we encountered such an excellent ability to handle small deflections as well as this car does. 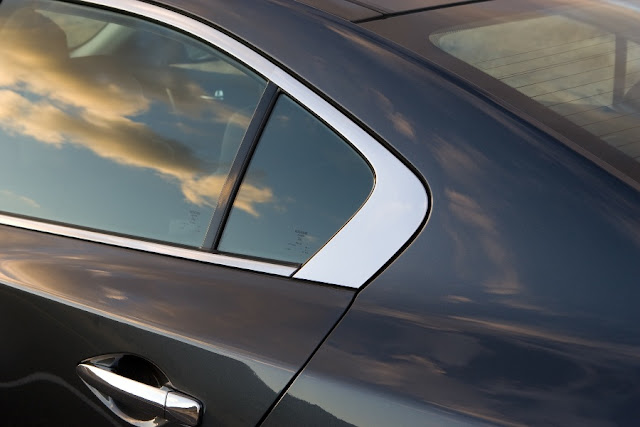 Okay, truth is, it’s not a sports car, but who are we to argue with the success of the ad agency’s campaign. The American Maxima is a neat package, well-sorted and we believe is streets ahead of the model Australians have been offered.

Back onto Highway 101 and it’s traffic tailbacks all the way into the northern approaches of the City of Angels. We join US 405 South (the San Diego Freeway) and pass by one of the most significant landmarks in LA today. Just near Brentwood is the fabulous Getty Museum, which opened in 1997, and definitely worth a visit.

On the lumpy, bumpy Highway 405 these are the conditions where the Maxima really shines. It’s comfortable, well-equipped and good value. What more could you want? If it’s brand caché, or European breeding you’ll pay a lot more, so Nissan North America seems to have made its mark with the Maxima.
Posted by John Crawford at 9:42 AM