First up, I am seriously impressed with this car. As I approach it I think it’s a bit gaudy, but maybe it’s the ‘Bling’ that appeals to today’s younger car buyers. It’s certainly contemporary, and rakish. 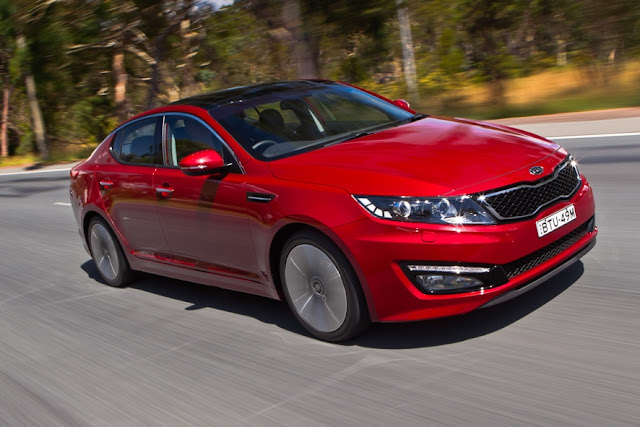 That’s all down to the man who has revitalised the Kia brand, via the stylist’s pen – Bavarian Peter Schreyer. Schreyer has impressive credentials. He worked with Audi first as a student in 1978, graduating in 1979 with his Industrial Design degree.

Subsequently, Schreyer won the Audi Scholarship to study at the Royal College of Art, London from 1979-1980. He went on to contribute the major styling influence to the outrageously successful Audi TT.

To say that one man’s influence has totally changed a company’s fortunes is to accept the dominance of vehicle styling in the market place. Schreyer’s new Kias are jumping from strength to strength, and establishing new sales records in every market where Kia operates. What a change from the early, rather clumsy designs which came out of Korea.

One of the most successful new cars is the latest Optima sedan. Working with the platform shared with Hyundai (for the Sonata/i45), Schreyer’s team has delivered a uniquely-styled compact sedan which has obviously captured the attention of compact car buyers in Australia, as well as Kia’s major export markets. 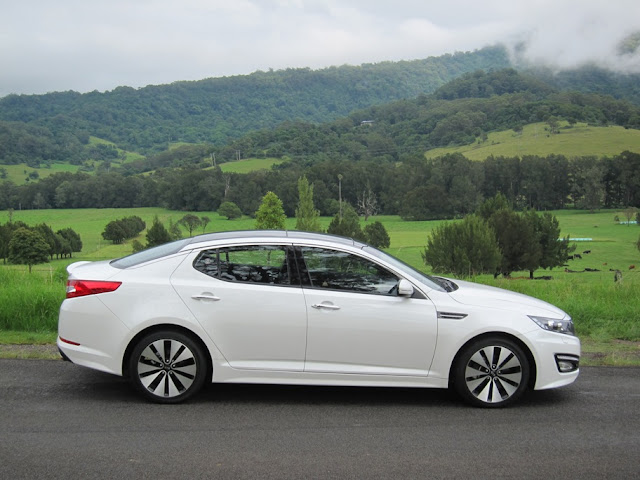 My test car, priced at $30, 940 (before on-road costs) is exceptionally competitive in its class, but it delivers in every area. At the moment the Platinum variant is the only model available, but Kia Australia says a new, Si-badged price-leader, will be introduced soon to expand the model’s appeal.

Because of the ‘Bling factor’ I think this car would look great in metallic black, or charcoal, but Snow White Pearl is what we’re driving, and at first introduction it delivers good performance, plenty of room, comfortable ride and terrific standard equipment. 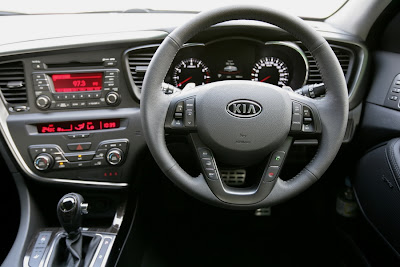 As I settle in, the Bluetooth connection to my iPhone is fast, and easy. The USB connection to my iPod is a little less easy, because the car’s audio system works better with the factory-offered iPod cable (rather than the regular iPod USB connection). However, the sound system, featuring Infinity Audio is very impressive. Fiddling with the tonal balance delivers excellent sound.

So, we’re on the road, heading south out of Sydney on the Princes Highway to Bateman’s Bay. It’s a four hour drive and will deliver the challenges which Australia’s smooth freeways, and indifferently-surfaced highways throw up. 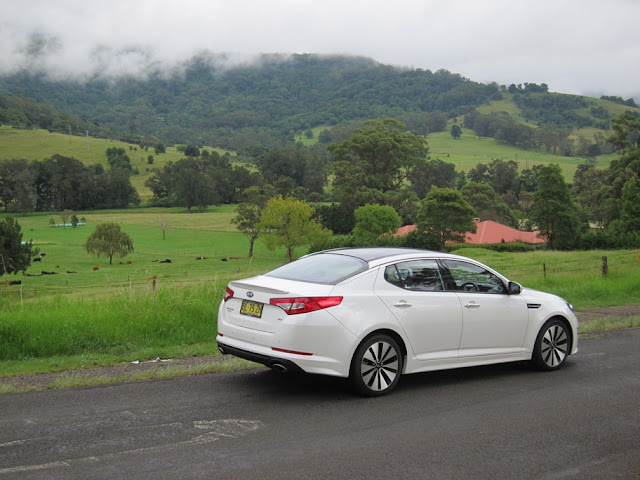 Initial impressions are that the 2.4 litre 4-cylinder engine is perky and responsive, especially mated to the six-speed Aisan-Warner automatic transmission. However things change when we get into typical touring conditions at higher speeds.

You need to use all the revs to get the Optima really moving, and keeping the engine 'on the boil'. With modest torque of just 250Nm (coming in at a very high 4250rpm) there's no 'lugging' potential, so you are grateful for all six ratios in the transmission.

This is easily explained when you study the engine performance, related to the car’s power-to-weight ratio. At 1551kg kerb weight, with a power output of 148kW, this is a car with the odds against it in the city. On a flowing highway run the combination of the free-revving engine and the six-speed auto delivers far better economy.

Climbing out of Bateman’s Bay, on the Clyde mountain ascent through Nelligen and Braidwood, the Optima (in Drive) feels breathless and struggles to keep up. However, working the gearbox, using the paddles, produces acceptable performance, but then the fuel economy definitely suffers. Given the compromises however, the Optima is easy to drive (thanks to the paddles, and the ratios) and the handling is a joy. The car points confidently and tracks smoothly, with just a slight trace of understeer.

Again, I have to comment that the secondary ride is very good. This is an aspect of ride quality which previously eluded Oriental car makers, but with European influence, they have certainly tailored the ride to more acceptable levels. 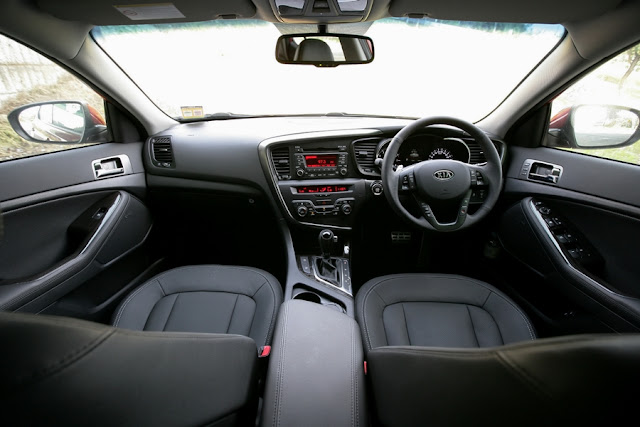 The dashboard layout is clear and logical, and the controls are intuitive and great for those of us who are a quick study (meaning I didn’t need to read the manual).

The steering wheel design should come in for special mention, because it’s very efficient when using the ‘paddles’ for manual shifting.

The weirdest thing about this version is its nomenclature. It’s the Platinum Gdi, which at first glance I would assume is a diesel-engined car – but it’s a petrol car – go figure! 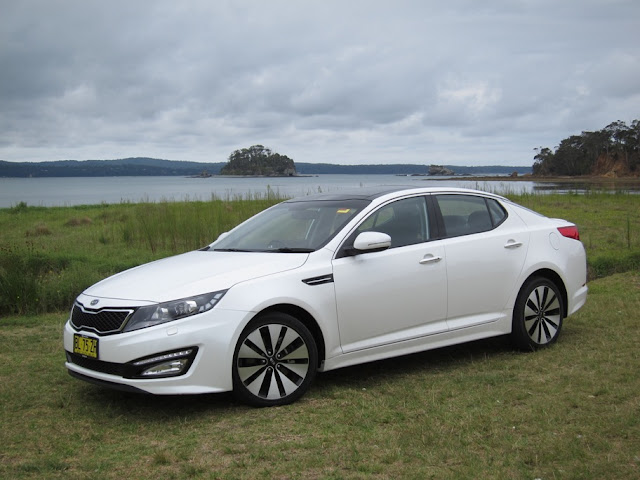 In its class the Kia Optima is more than a match for its competition, and once the lower-priced model arrives, I think it will definitely boost Optima’s overall sales.

The Optima is comfortable, well-equipped, sporty to drive and has loads of both interior, and boot space. It’s a very competitive package, and given its sharp styling, I think it will sell well. I certainly enjoyed the 800km test drive. 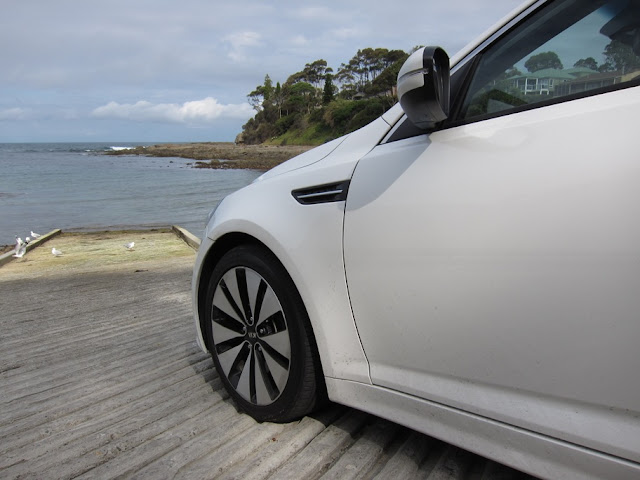 Posted by John Crawford at 9:34 PM