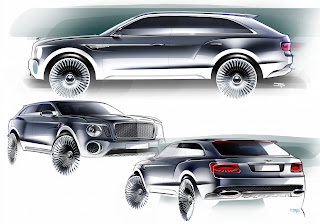 So, after many false rumours and car magazine hype over the last eight years, Bentley has announced an SUV concept at the Geneva Salon. Reaction ranges from ‘ghastly’ to ‘great’ - but let me tell you, regardless of the purist view this vehicle will sell like crazy to new Bentley aspirants - especially in China and the Middle East. Plus more than a few current owners as well.
Also, I think Bentley’s timing is excellent. The brand has matured to the point where it can extend into niches like this, and capture another dimension of Bentley ownership.
Ten years ago this idea would have horrified Bentley owners, employees and purists, but that was ten years ago. Volkswagen Group has been supportive and patient and has backed Bentley’s trials and tribulations throughout the GFC, and it deserves to realise improved returns on investments it has made in the brand.
Bentley was a pretty wobbly enterprise back in 1999 when VWAG Chairman Ferdinand Piech made his first visit to Crewe to assess the Group’s new acquisition. Thanks to Dr. Franz-Josef Paefgen’s sensible guidance, and VWAG’s continued support, Bentley made it through the GFC and with great new products like the V8 Continental and the Mulsanne it now looks to be on the springboard to better sales, regaining the ground lost via the economic downturn.
When you add rapidly-growing markets like China, Russia and the stalwarts like the USA, the EXP9 F SUV looks, in my opinion, like the new chapter in Bentley’s history that the current Chairman, Wolfgang Durheimer, was talking about at the splashy intro in Geneva.
As far as I’m concerned the purists need to understand that this is a business, not just a dream factory for diehards.
Posted by John Crawford at 5:54 PM