During my 40-year life and career in and around cars, I’ve met many whom I would describe as giants in the field of automotive design. Many of those designers subsequently have become good friends of mine, and one thing they all have in common is the ability to successfully, and cohesively blend art and design. 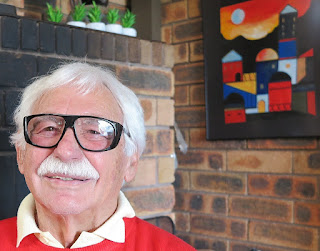 However, shifting tracks for a moment, I’ve recently had the honour of meeting an architect, whom I must also describe as a giant – Nino Sydney.

Nino was born in Zagreb, Croatia in 1932, studied architecture at the University of Zagreb between 1950-1954. In 1955 he worked in Germany, joining design teams which designed apartments, a bank, and a modern housing estate in Luxemborg – but at the end of 1955 he set sail for a new life in Australia.

Of course, his adopted country would not recognize his architecture degree from Zagreb, so he studied and graduated in architecture at the University of Sydney in 1958, winning a medal for design in his final year. In 1959 he returned to Germany for a year, but then returned to Sydney, where he joined the Lend Lease company.

In 1961 he was appointed Chief Architect for Lend Lease Homes, a division set up by Lend Lease founder, Dick Dusseldorp, to develop homes on large tracts of land in and around Sydney which had been acquired by Lend Lease. 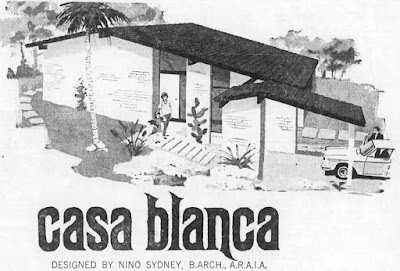 And here’s my personal connection to Nino. In 1969 my wife and I acquired a steeply-sloping block of land in the northern Sydney suburb of Carlingford, simply because we had visited the Lend Lease Homes exhibition village and had fallen in love with Nino’s ‘Casa Blanca’ concept, designed especially for sloping land.

We did not end up building the home, as a job as a radio disc jockey was offered in Perth, Western Australia – but there was no doubt that for most of our lives we imagined creating a home in the ‘Casa Blanca’ house.

Our choice of design was recognized by Nino’s peer group and he won a design award from the Royal Institute of Architects for Casa Blanca.

However, Nino was certainly no one-trick pony. Probably, equally famous was a house he designed called ‘The Beachcomber’ – which many say is inspired by Le Corbusier’s Villa Savoye. This design was also an award winner. 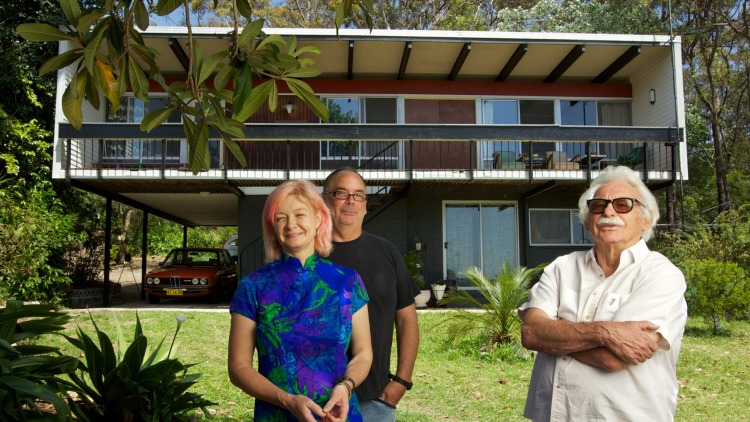 Nino’s division went on to sell as many as 1000 homes, based on 16 basic designs, ensuring Nino Sydney’s place in the pantheon of notable Australian architects.

Recently, thanks to a friendship with his daughter Maya, I was able to meet Nino at his home in Sydney, to discuss his life, his achievements, and surprisingly, an automotive connection.

I learned that whilst his home design ideas were inspired by the modernist design ethic emerging in Europe following the end of World War 2, and also the Bauhaus emphasis on simplicity, he was also a great fan of budding expatriate French designer, Raymond Loewy, who had moved to the USA in 1919, after serving in the French Army in WW 1, and winning the Croix de Guerre.

Loewy coined a famous phrase called ‘Ugly Doesn’t Sell Well’ and although, he was essentially an industrial designer, he became inexplicably linked to the design of Studebaker cars. I will write more about Loewy in a separate post.

Nino truly admired Loewy’s flowing, avant garde approach to design, and his combination of artistic influences on the practical elements of product design.

In automotive terms he appreciated Loewy’s initial 1961 sketches for the famous Studebaker Avanti, and especially the final product in 1963.

I visited Nino and Maya at his house during the time I was driving the latest, spectacularly-beautiful Alfa Romeo Giulia. I asked him to come and look at the car, and his response was typical of the man.

He loved not only the practical elements of the design, but also its flowing shape. He commented that it appeared to him to be: “not only of classic proportions, but elegant, in a simple way” 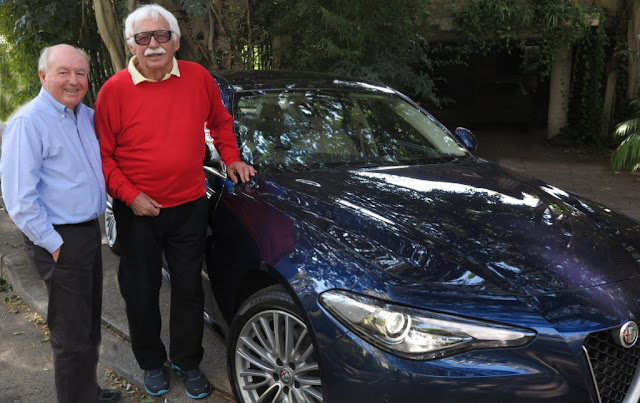 For a man who successfully blended art with architecture in both a modernistic and simple manner, Nino Sydney emerged from my afternoon’s discussion not only as a giant of design, but also a man of enviable humility, and satisfaction with his life’s work.

Nino told me that Dusseldorp was hard for most people to deal with. Nino saw him as decisive and determined.

From the outset he and Nino were on the same wavelength. Nino said: "Whatever I needed to get the job done, I would tell him, and it would happen."

It was really Nino Sydney, who almost singlehandedly, brought Australian house design to the highest echelons of ‘modern’ design following his arrival in his new country.

Thanks Nino – you served your country well.

By the way, even his daughter’s name – Maya, comes direct from a quote by Raymond Loewy. “Most Advanced, Yet Acceptable.”
Posted by John Crawford at 7:59 AM