FINAL COMMUNIQUE FROM A CORPORATE COMMUNICATOR 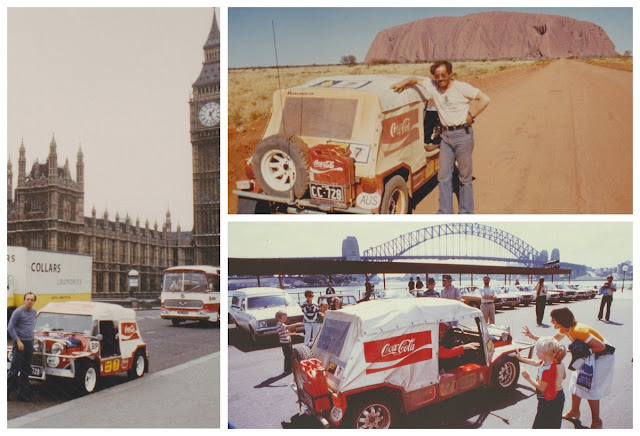 As I boarded the Singapore Airlines 707 in late June 1977 I already knew that at the end of the Singapore Airlines London-To-Sydney Car Rally, in September, I would be starting a new job. However, in years to come, I would enjoy moving into a series of corporate jobs working with some of the most famous brand  names in the automotive industry.

The Rally was 30,000km; through 30 countries in 30 days, and quite frankly at the end I was knackered, and hooked on Coca Cola! After I had cleaned up and settled back into family life in Sydney, I was announced as the new Head of Public Relations for the troubled LEYLAND AUSTRALIA.

I say troubled, because Leyland Australia was the offspring of the British behemoth, the BRITISH MOTOR CORPORATION, which in 1954 began assembling Austin and Morris cars at a huge plant in Sydney under the name BMC Australia. Things rolled along nicely until the mid-1970s when the British Leyland Motor Corporation of Australia decided to challenge the market leaders Holden and Ford, with a new, locally-designed and built sedan called the P76.

It was a well known disaster, and resulted in local manufacturing being shut down, the company renamed Leyland Australia, and it became an importer of a range of poor quality British-made cars, subsequently needing an injection of some high-powered public relations to try and turn around the community’s, and media’s negative perceptions of the company and its products into positive territory. 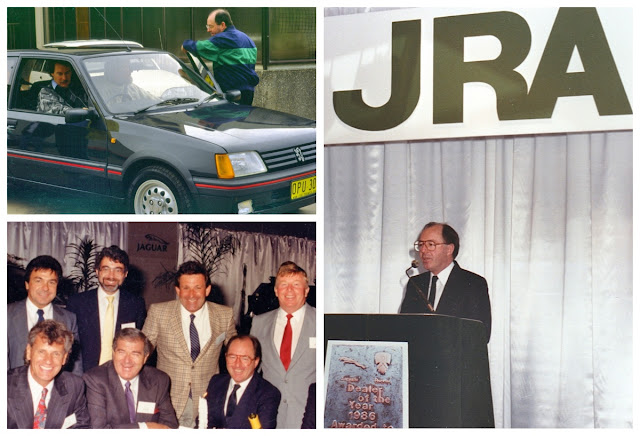 My self-confidence as a communicator, bred from my careers as a motor racing commentator, automotive journalist and radio announcer provided many opportunities to be ‘on stage’ presenting new vehicles, emceeing dealer conferences and corporate events. My person-to-person communications skills were also boosted over the next 13 years as I became the public face of Leyland Australia and slowly began turning the tide of PR negativity around.

In 1983, under the energetic and skillful new Managing Director, Phil Hovell, Leyland Australia was renamed JRA Limited, and a new era opened up for the company. We had ‘weeded-out’ all the poor performing cars, introduced smart new models, taken on the Peugeot franchise, and the company was also the number one producer of bus and coach bodies in Australia. Low profitability vehicles like trucks and tractors had also been consigned to history. 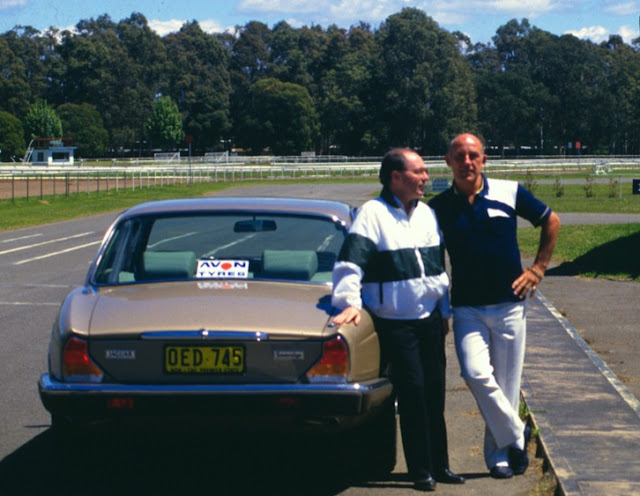 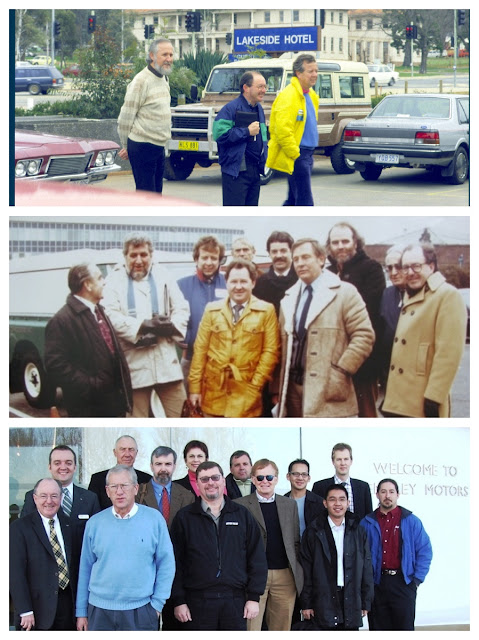 In addition, sales of our most valuable nameplate, Jaguar, were rising fast, thanks to much clearer focus on marketing the brand.

The PR programs included a number of opportunities for me to host journalists from all over the world at various new car launches in Europe and England.

Yes, these media trips were fully-funded PR campaigns, but for me, the most eventful outcome was that I ended up increasing my circle of friends, because of our shared passion for cars, and they way they are designed and put together.

In terms of PR programs, I was required to think outside the box and come up with programs that were not only useful, informative and beneficial to the brand, but also innovative, low-key and jovial. There were also investments along the way in which I played a major role, like talking my fellow Board members at JRA into acquiring one of the most famous racing Jaguars in Australian motor sport history, to use as a promotional tool.

In the 1980s I was able to broaden my skill set even further, because I had decided that producing industrial videos about our company and its products would be a useful new tool to reinforce the strength of the company and its market dominance with models like the Range Rover, Jaguars and our contract with the Australian Army to supply Land Rovers. The videos were aimed at media, government departments, dealers and customers, and proved very effective. 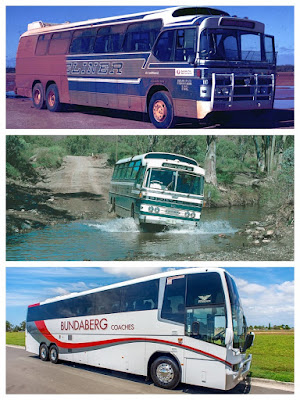 Then, to further promote the history of Peugeot’s presence in the Australian market since the early 1950s, in 1983 I arranged to bring on board the winner of Australia’s very first ‘Redex Round Australia’ trial, humble chemist Ken Tubman, to re-run the event in a current Peugeot 505 STi. In 1953 it was a Peugeot 203.

Wherever possible Ken followed the original route, made difficult by the fact that modern freeways had been overlaid over many of the dirt tracks and gravel roads they encountered in 1953. 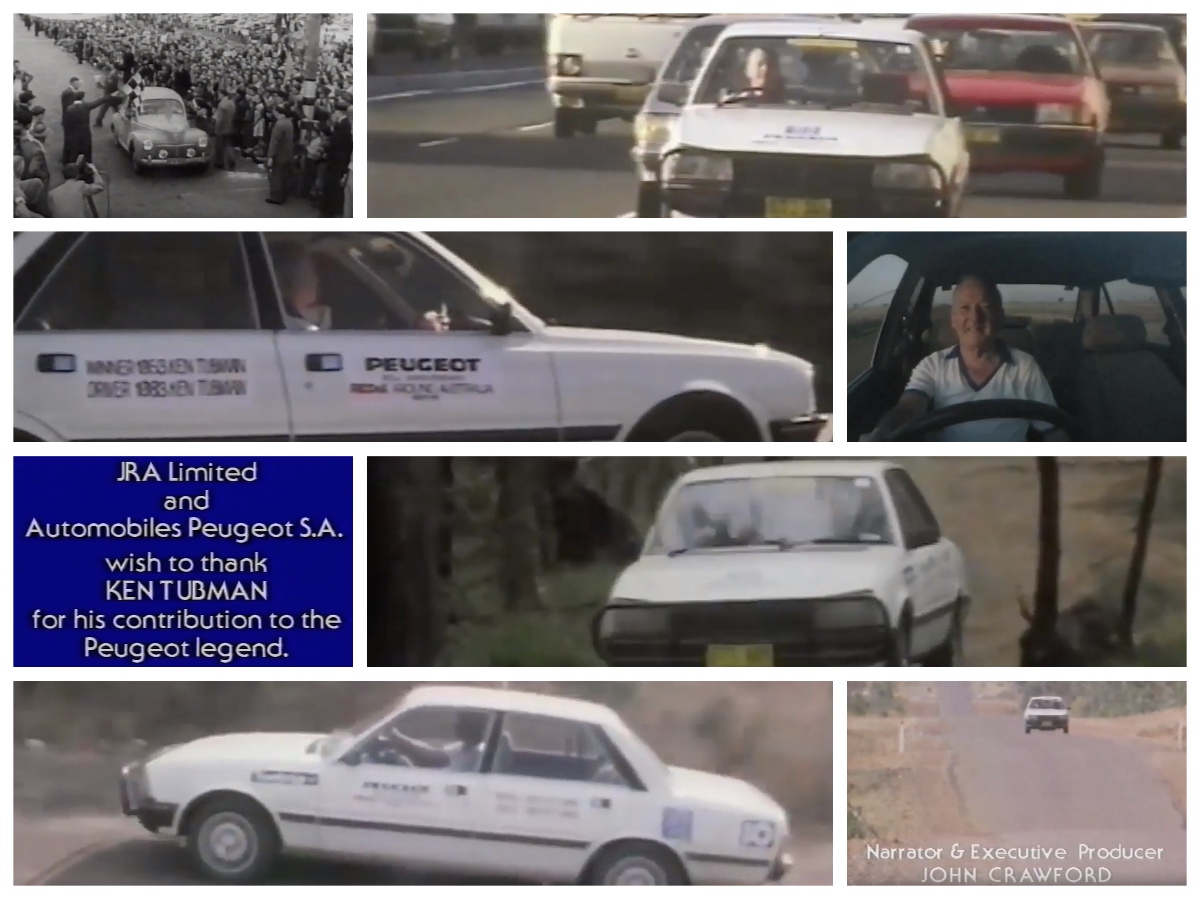 This was so successful Ken and I were invited to Paris, to present a copy of the video to the head of the family, m.Roland Peugeot.

In the late 1970s, thanks to the drive and determination of our Deputy MD, Jack Heaven, JRA Limited won a huge contract to supply the Australian Army with a unique series of Land Rovers, in 4WD and 6WD designs. The army called it ‘Project Perentie’ named after the large Australian lizard which was easily the master of its outback environment. 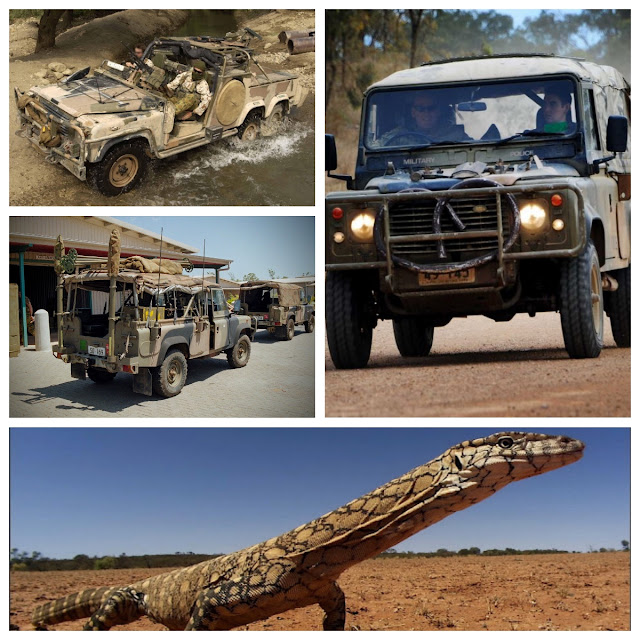 The major PR benefit was that both the 4WD and 6WD models were completely re-designed, and re-specified by JRA exclusively to suit the Australian Army’s unique requirements.

The next turning point in my corporate career occurred when Ford Motor Company acquired the, once-again, ailing Jaguar car company in 1989. Ford established a ‘Rescue Team’ and I was invited to join as Head of Public Relations for Jaguar Cars North America, the company’s biggest market.

The task was, again, very daunting. In 1991 sales were just 9,376, a far cry from its sales numbers in the late 80s, around the 20,000 unit mark. Because of my success in turning around Jaguar’s image and media perceptions in Australia, I was told by Mike Dale, President of Jaguar Cars NA, that if we didn’t save Jaguar in the USA, Jaguar would not survive. No pressure then.

My PR role also involved managing Jaguar’s racing activities in the USA, and working with the Head Office PR team to maintain a high level of visibility for the brand in motor sport. This was made easier having won the 24 Hours of Le Mans in 1988. Finally, by 1994 we had lifted annual sales to 15,195. 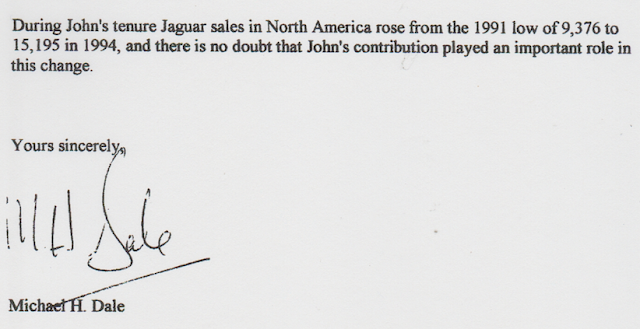 At this stage of my corporate career, despite the obvious challenges, I was having a ball. Yes, it required long hours, quick thinking, and creating unique and effective PR programs using not only Jaguar’s fabled history as an anchor for our communications, but also employing Formula One racing champions like Sir Stirling Moss, the late Phil Hill and Australia's Alan Jones. 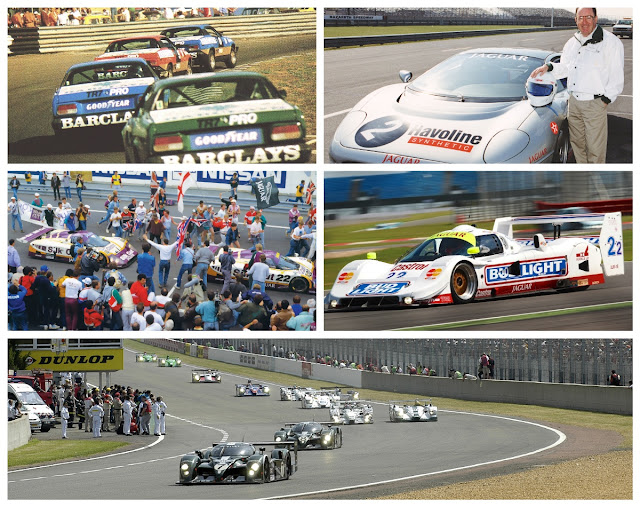 Throughout my entire career in the automotive industry I was never far from the racetrack. Motor sport crossed my path in just about every PR role I was given.

I was very fortunate to be at Le Mans when Jaguar won the 24 Hour Race in 1988; and again in 2003 when the Bentley Speed Eight snatched the trophy.

In addition to motor racing, I was also instrumental in managing a number of key corporate sponsorships for the companies I represented. It's probably no surprise that a large number of these happened via the avenue of motor sport, but we worked hard to make sure they paid off. 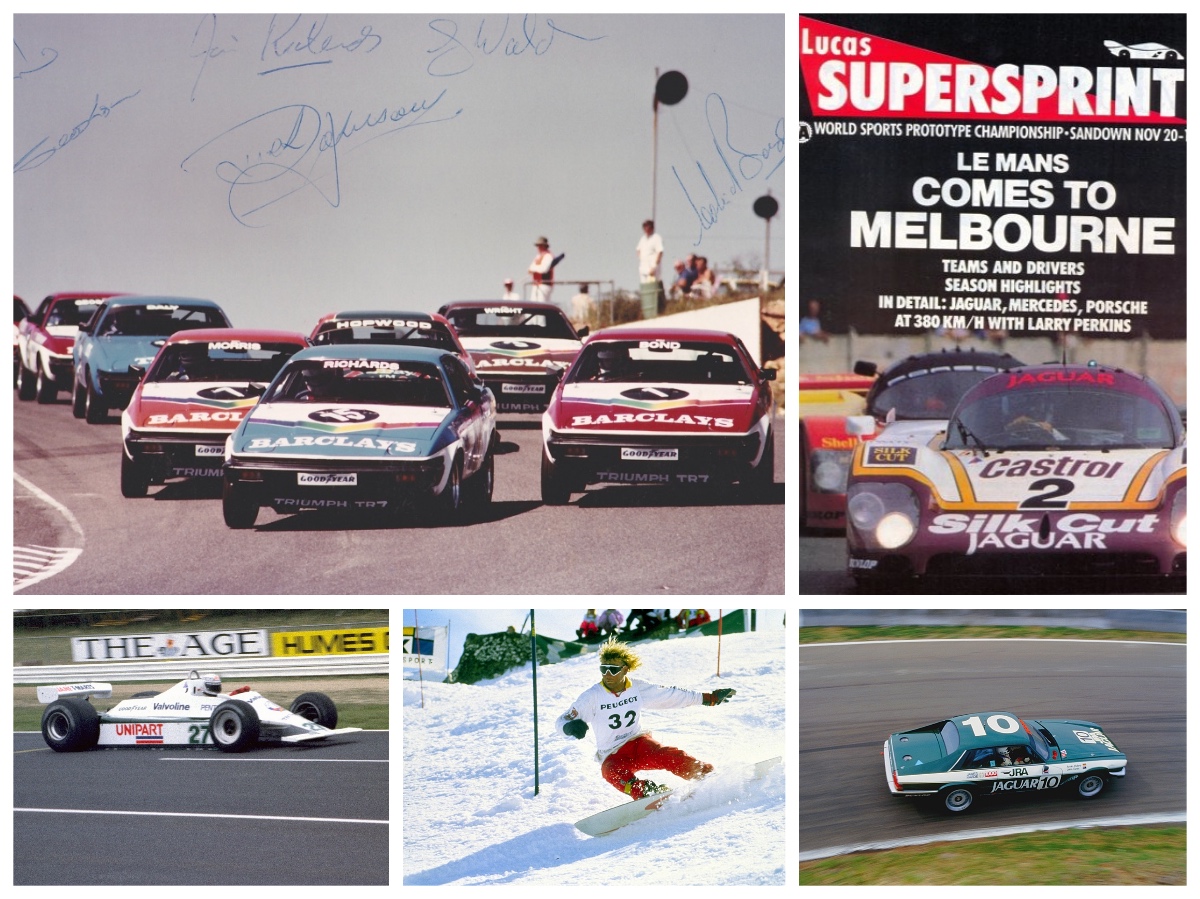 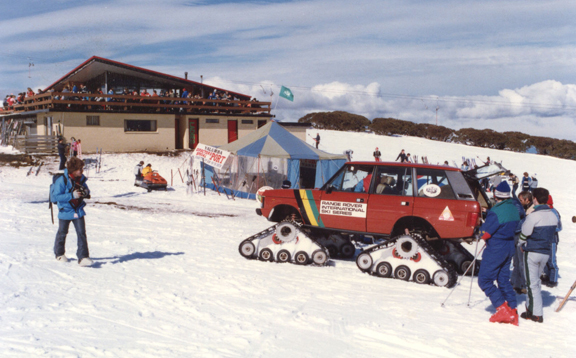 During my 13 years with Leyland Australia/JRA Limited we were encouraged to take risks with our promotions and sponsorships and it certainly helped to raise our profile.

When my USA visa ended in 1994, I returned to Australia and joined the fledgling Daewoo Motor Australia which had just started business in August that year. 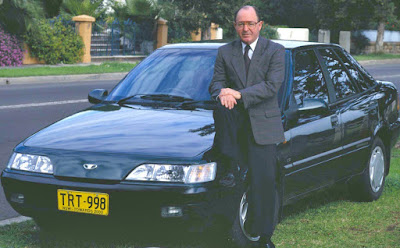 This role not only saw me managing public relations, but I was also head of Customer Care for a brand new badge, with ‘zero’ image value. The fact that most Daewoo buyers had previously only been able to afford used cars brought a different set of problems, as they didn't understand that maybe there was the occasional problem - even with a new car!

It was a new set of challenges, but the icing on the cake was that within four years we had gone from zero sales, to 21,000 sales per annum.

In 1998 I received a call from the Chairman of Rolls-Royce and Bentley Motor Cars, an old friend from Austin-Rover days, Graham Morris. He told me that Volkswagen AG had acquired Bentley, and the brand’s presence in the US market was so low, it was invisible. In order for Bentley to succeed overall, it had to establish a new presence, image and healthy sales in the USA. I thought, “Here we go again.”

After I was appointed it took some time for the US Immigration department to issue my work visa, so in the interim I spent time at the HQ in Crewe, Cheshire, learning the detailed history of the Bentley brand.

Then one day I was asked to fly to Germany on the VWAG corporate jet, where I was introduced to VWAG Chairman, Dr. Ferdinand Piech. It was a private interview, and pep talk about building the Bentley brand in the USA. No pressure! 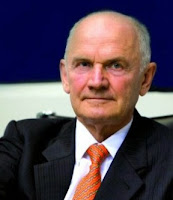 Dr. Piech told me that after Graham Morris’ reassurance that I was the ideal man for the Bentley PR job, there would be no budgets for marketing, advertising or promotion. Dr. Piech had decided the whole budget was to be directed into PR activities, and he was hopeful the company had made the right choice, and I returned to Australia to await my visa, and seriously consider the new challenge I was facing.

In 1998 Bentley sold just 880 cars in North America, and I’m delighted to say that global sales in 2006, when I retired had risen to almost 6000, helped along by the launch of the Continental GT coupe in 2003. More importantly, research revealed 81% of Continental buyers were new to the Bentley brand. 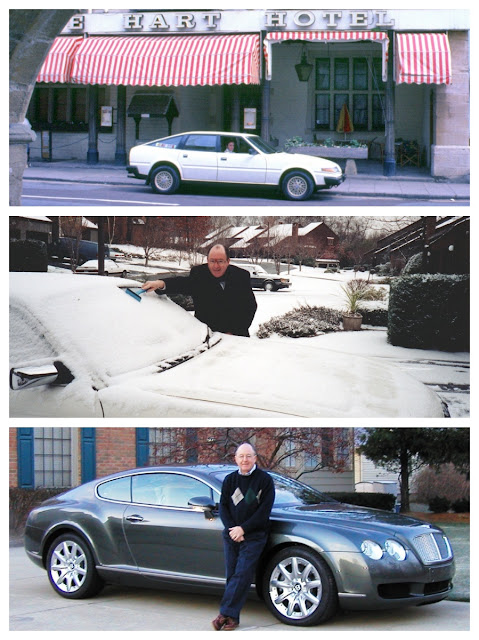 Two of the greatest elements I enjoyed in my 40 year career was the constant travel, and the chance to drive an extraordinary range of cars.

I managed to visit every continent, toured the Far East extensively, as well as Europe, north and south Africa, and of course the USA.

Not only did my various roles sharpen my communications skills, but added knowledge and broadened my experience. I have led a very fortunate life, but, no pain, no gain.

As far as cars were concerned they ranged from prototypes, handbuilt production cars, flash company cars and even the occasional race car.

I put in a lot of hours on the job; I was devoted and dedicated to being as professional as possible, but I also made a lot of great friends along the way – from the absolute top levels of automotive management, to world famous designers, racing drivers, personalities and great journalists, many of whom I count today amongst my most enduring friendships.

I must mention my lifelong gratitude to the CEOs and Directors I served under. I learned important aspects from each of them, and senior automotive industry figures, and was rewarded with incredibly generous relationships with each of them. Thanks, my sincere gratitude.

There was also the opportunities I had to work with many of my heroes.
As I’ve said before, my career was less planned, rather more a combo of serendipity and opportunities. The events and the photos evoke great memories of a life well lived, simply by being a car nut. 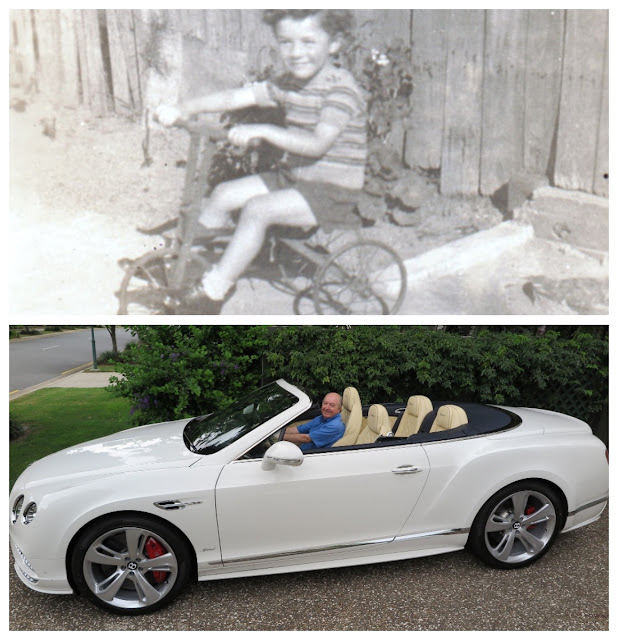 Posted by John Crawford at 9:54 PM