Since I wrote about Porsche's 17th victory at Le Mans I have been searching my archive for a special photograph, and I'm pleased to say I finally located it.

From the superb collection of photos by legendary motor sports photographer, Jesse Alexander, comes this fabulous shot of a Porsche pit stop at Le Mans in June 1958, which contrasts hugely with the same activity from this year’s 24 hour race.
This is car #29, driven by Jean Behra and Hans Hermann, an RSK 718 Spyder which finished first in class and third overall. The power came from a 1.5 litre quad cam flat four which produced just 142hp!

Contrast this with the 2015 Porsche 919, a hybrid racer with a 2.0 litre turbocharged V4 engine, with an energy recovery system which adds 1.7kW per lap of Le Mans to its lithium-ion battery system. It also features an exhaust-energy recovery system operating through a turbine in the exhaust system. 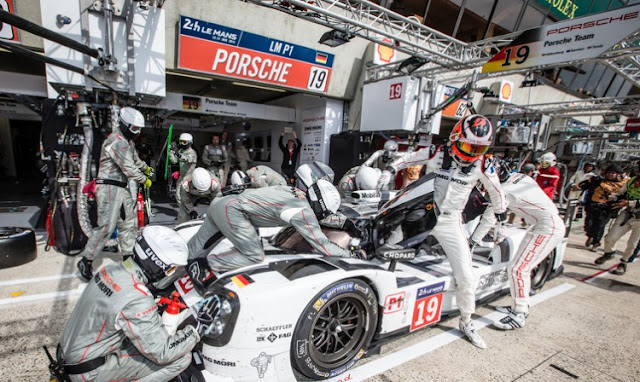 This year the fastest pit stop took 1.39 minutes, and that very definitely contrasts with the somewhat leisurely appearance of the 1958 stop.

I first met Jesse Alexander at Laguna Seca in 1991, and never fail to be amazed at his incredible portfolio of motor racing photographs.
He began in the 1950s by using money from his mother to travel to Mexico and photograph that year’s La Carrera Panamericana. Then he took himself to Europe and drove his own Porsche from race to race.

He engaged not only with the drivers, but anyone in front of the camera, whether they were bystanders, mechanics or race fans. He has a wonderful personality and is one of those rare people who makes you feel as if you are the only person in the world, when he is talking to you.

If you have the chance to check out Jesse’s wonderful collection of motor racing photos, do it, you will be amazed at the shots he has captured throughout his career.

Posted by John Crawford at 7:45 PM