THE COMMUNICATOR MOVES UP A NOTCH 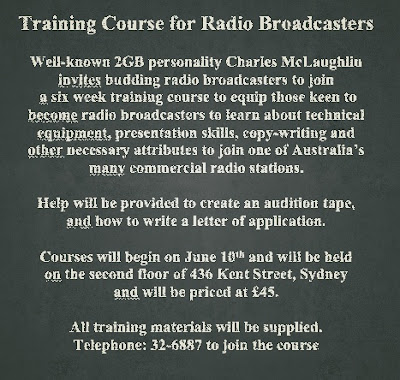 This small two-column advertisement appeared in the Sydney Morning Herald in June 1964, and as I had been drifting from a job at an automotive components company, to a job as a warranty clerk for McLeod Ford in Rockdale, to a boring accounting role at the Southern Pacific Insurance Company in Sydney, the idea piqued my interest.

Given my success at motor racing commentary, I figured I had a leg up over any other attendees, so I signed up immediately. I took to it like a duck to water, and was one of only two ‘budding broadcasters’ to pass the exams, out of 20 attendees. I immediately sent off a flurry of letters and audition tapes to a number of country radio stations in my home state of New South Wales, and received offers from stations in the country towns of Deniliquin, Young and Murwillumbah.

Winters in Deniliquin and Young were always bitterly cold, so I chose to respond to the offer from 2MW in Murwillimbah, located about 30 minutes drive south from the NSW-Queensland border.My application was accepted. 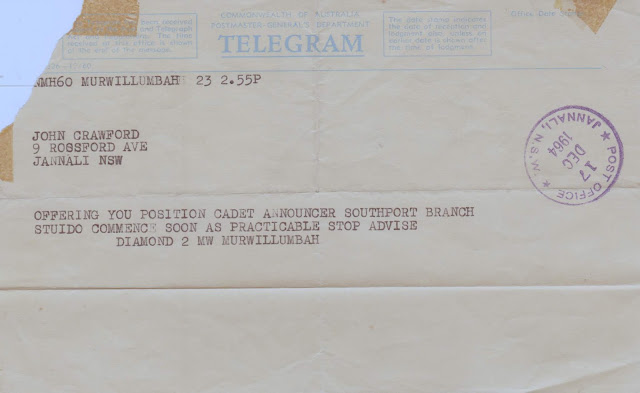 Imagine my surprise when I arrived at the studios in Murwillumbah to be told, I would be one of two staff members permanently manning the station’s satellite studio at Southport, on Queensland's sunny Gold Coast, 64km further north.

I launched into the job with great confidence, which was further bolstered by the station’s decision to have a mobile studio in a caravan (right), which was towed, and parked, at a different Gold Coast beach every summer weekend. So, it was important to ‘perform’ as I was on-show to beachgoers, including many attractive, bikini-clad young women.

In early 1965 I applied for a job (from 9am-noon, a prime timeslot) at Radio 4IP in Ipswich, Queensland. The great attraction of this station was that geographically it was outside the Brisbane metro area, but the location of its transmitter beamed our signal directly into Brisbane, giving us, and our advertisers access to the bigger Brisbane market.

Along with my radio show each morning, current trends demanded that the station pursued a variety of ‘promotions’ to ensure its personalities were seen out and about in the community. 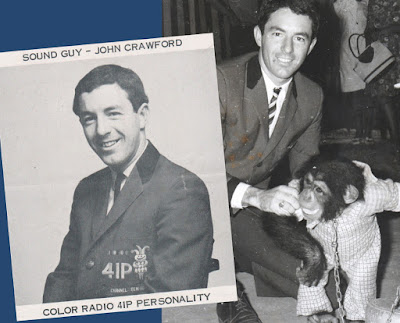 One involved promoting the arrival of a circus in Ipswich and I was nominated for some publicity photos with one of the chimpanzees, which went pretty well until the chimp decided he had had enough and bit me, painfully, on my right hand, which was conveniently located.

Working from Ipswich separated me from my fiancée in the months leading up to our wedding, but as I had foolishly crashed my Mini into the back of another car on a rainy night, it was up to her to drive the 80km to see me. 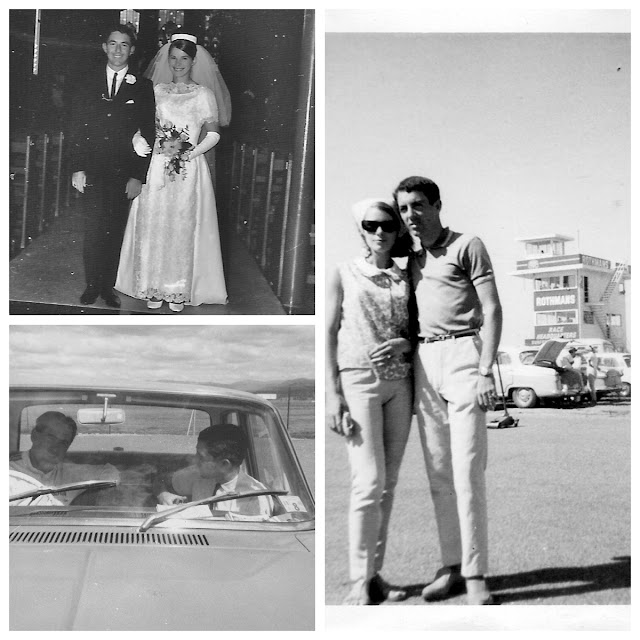 We married on April 16, 1966, but I had to break the news (very carefully) that I had made a commitment to Gold Coast entrepreneur, Keith Williams, that I would lead the commentary team at the very first meeting at the new Surfers Paradise International Raceway, which was to be held over that weekend.

So we spent the first day of our honeymoon at the circuit, with me commentating in the control tower, and my wife parked under a beach umbrella, complaining about the noise the race cars made, like a “swarm of angry bees.” She's never really changed her attitude to motor racing in 53 years.

One highlight of the day was an exclusive interview with Sir Jack Brabham (above bottom left), who had interrupted his Formula One season in Europe, to drive a few demonstration laps in his Repco-Brabham F1 car. The interview ran in Racing Car News, and he was so pleased with the result, it ensured we remained good friends all of his life.

In 1967, on a holiday to Sydney to see my mother, I was visiting a local shopping mall, where Sydney’s then Number One station was conducting an ‘OB” (Outside Broadcast) anchored by one of the station’s top-rated disc jockeys. We had been communicating for a few months by letter, and in between records he mentioned that the station was looking for a new DJ to handle the ‘graveyard shift’ – midnight till dawn – and if I was interested he would set up an interview for me at the station.

I jumped at the chance, and next day I spent the morning being interviewed and evaluated by the 2UW Program Manager, Ray Bean, and at lunchtime I called my wife to tell her we would be moving to Sydney, as soon as possible, because I now had a job on Sydney’s number one Top 40 station!

I didn’t stay long doing Midnight to Dawn, and progressed to other timeslots, until it was decided that I would become the permanent ‘fill-in’ DJ for any of the station’s top stars who wanted a vacation. 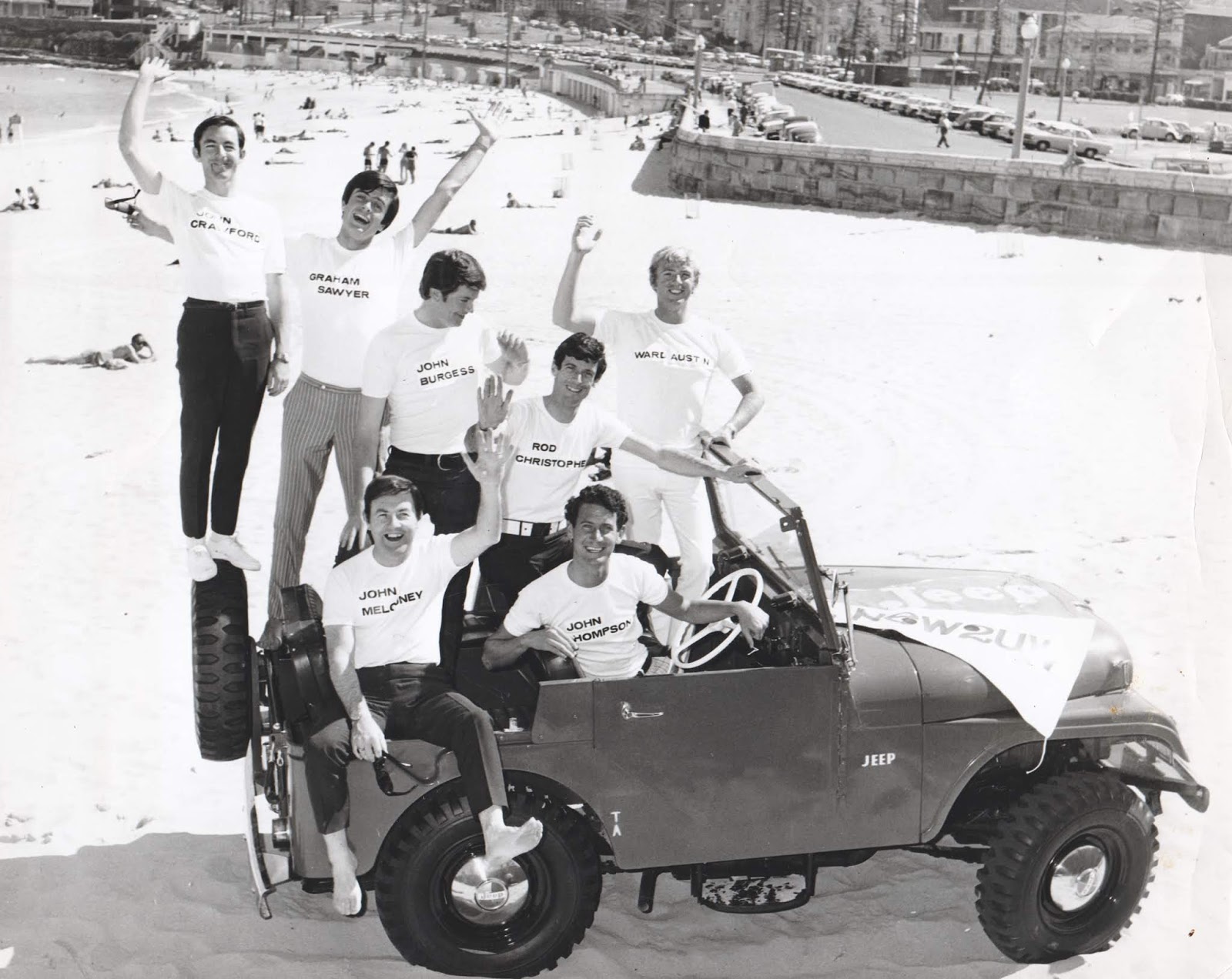 This gave me not only wider exposure to the total audience, but also meant I became a prominent member of the on-air team, and was featured in all the station’s promotions, like our 'Red Jeep' promotion. Despite not basking in the glory of my own timeslot, I loved the variety in working at all hours of the day.

My only individual show was on Saturday afternoons, and I began ‘tweaking’ the music format to focus almost solely on Australian recording artists, which brought me into contact with two of Australia’s most prolific record producers, and soon I was a fixture at EMI’s Studio 301, when I was off-duty.

I even became involved in sorting through all the new discs, which arrived from the USA each week, scouting for possible songs for the artists, and attending their recording sessions. 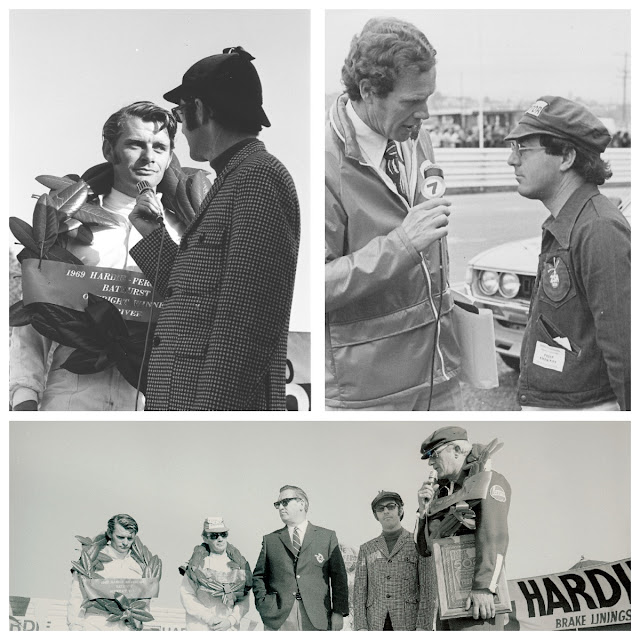 During this time I also became heavily involved in a number of compering jobs at the motor racing circuits in NSW, helping to present trophies to winning drivers, commentating on races, and being interviewed myself for my views on various aspects of motor racing, and the qualities of the up and coming drivers.

Record company promos and parties to introduce touring international recording artists were also a common feature of being part of Sydney’s highest-rating Pop station. This meant I was able to meet stars like Roy Orbison, John Farnham and Davy Jones from the Monkees, along with many other well-known artists. 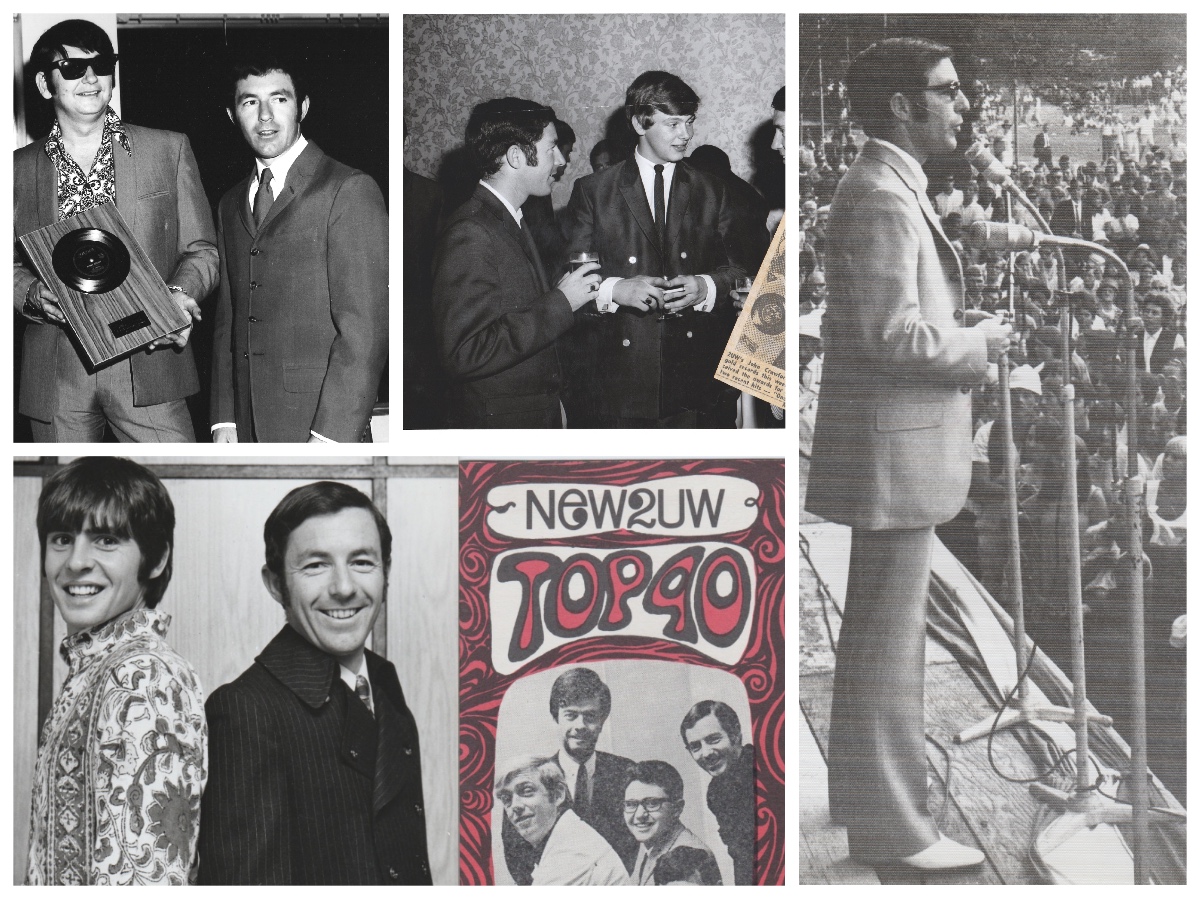 In 1970 I then decided to take up snow skiing, and at the time I was back doing Midnight to Dawn. My days off were Wednesday and Thursday. So myself and a friend would leave Sydney at 2am on Wednesdays, arrive at the snowfields at 7am; ski all day, then depart for Sydney at 5pm, arriving back at my apartment at 10pm. I had all day Thursday to recover.

In early 1971 a friend offered me the job of managing a refurbished ski lodge at Thredbo, NSW, and after my complete embrace of skiing I decided to take it on.

Bad move. The apartment provided for me and my wife and our baby son was uninhabitable; the refurbishment had not been completed, so I was forced to become the foreman, to get it finished, and that great idea lasted barely three months. 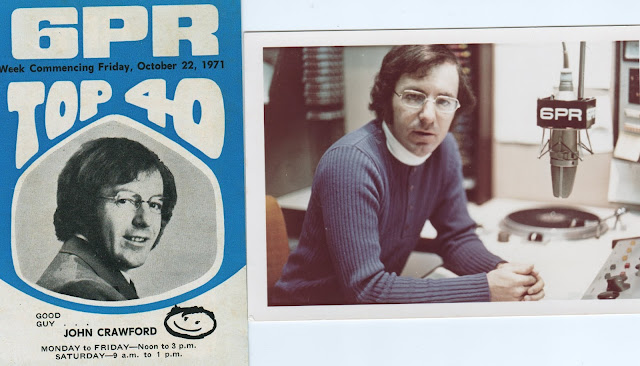 It was a radio job when I needed one, but we were soon forced to think about returning to the east coast because of a much smaller salary, compared to my previous DJ jobs.

I was then offered the role as Assistant Editor at MODERN MOTOR magazine in Sydney, so that the then Editor could take a six month sabbatical to the UK and Europe. 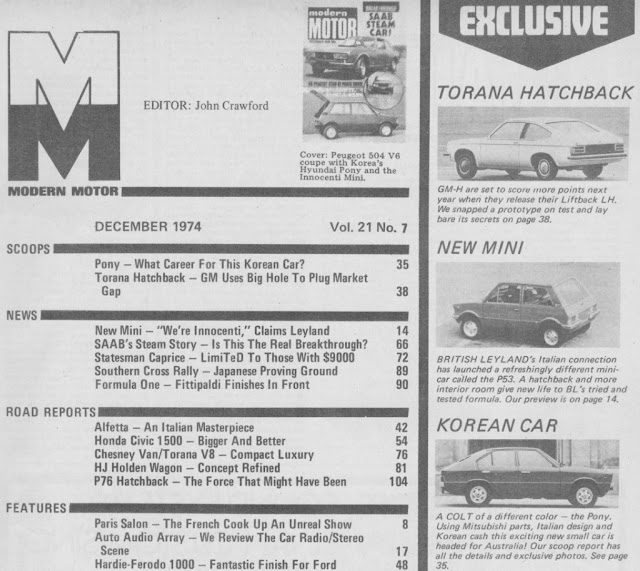 So, in 1972 we sold our Perth house, packed up and returned to Sydney.

In November 1974, when the Editor returned from Europe, the publishing company decided I was doing a better job than he was in boosting both newsstand sales, subscriptions and advertising revenue, so he was fired, and I was promoted to Editor, remaining there for five years, until my good friend Hans Tholstrup, asked me to accompany him as the Navigator, in his tiny Mini Moke, which he had entered in the 1977 Singapore Airlines London to Sydney Car Rally. 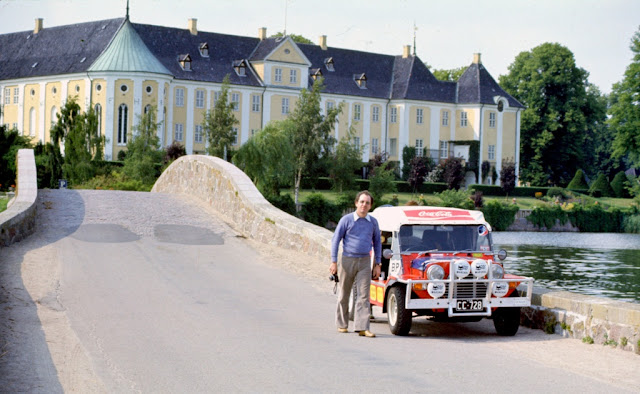 Again, and again I enjoyed not so much a planned career to get ahead in life, but rather I took advantages of serendipitous opportunities, which came along just at the right time.

However, my skills as a Communicator were being developed with each radio job; each compering job, which I took on during my time in radio, and I also added to my experience by reporting for an Australian national radio network, during the London to Sydney Rally.

Not to mention the extensive writing experience as a full-time automotive journalist in my job as Editor of MODERN MOTOR magazine, having written hundreds of thousands of words over five years, and developing my skills as a photographer.

My progression to becoming a 'communicator' was continuing to develop both experience, and open up new opportunities.

But, as far as I’m concerned, the best was yet to come.
Posted by John Crawford at 10:27 PM