THE YEAR MAZDA 'SAW THE LIGHT'

Even though I was always aware of Mazda’s participation in the Australian market in the early 60s, it wasn’t until the mid 60s that this relatively small Japanese car company blasted its way into my consciousness with a striking, compact sedan styled by one of the world’s most promising, up-and-coming car designers.

Mazda, like many Japanese companies who turned to making military hardware during World War 2, benefitted from America’s input to Japan’s commercial post-war recovery, and it turned to producing trucks and light commercial vehicles. 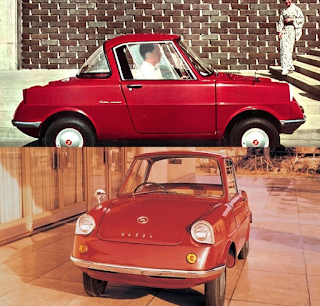 It wasn’t until the launch of the R360 Kei car in May 1960 that Mazda, operating under the name Toyo Kogyo, became a passenger car manufacturer.

Like many Japanese vehicle manufacturers in the post-war years Mazda's passenger car designs were a bit clunky, because they were mostly styled in-house. Apart from some pre-war American influences, the later Japanese cars were stolid, unimaginative designs which were nonetheless popular because they were all that was available. 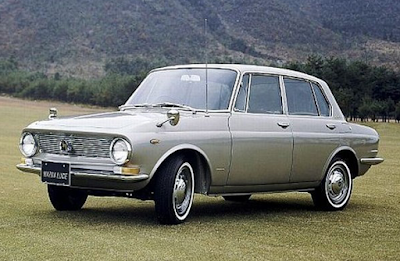 In 1963 Mazda turned to Bertone, and the relationship produced the Familia (right), which became a strong domestic seller. However, further contact between the two companies changed dramatically when Giugiaro entered the conversation.

He had been working on a four-door sedan concept and came up with the design codenamed SP8, which featured front wheel drive, and Mazda’s own development of the Wankel Rotary engine.


The design was not quite ‘together’ because of the need for a larger front overhang (to accommodate the rotary engine and FWD), and the nose in profile seemed to ‘droop’.


However, when Mazda said it wanted a more conventional sedan, Giugiaro produced an almost shark-nosed design with exceptional proportions, slim pillars, and a car which could have even been mistaken for an Alfa Romeo.

Also Giugiaro made a subtle change to the bodyside compared to the SP8. Despite the shorter overall length, he moved the style line to above the wheelarches, creating the impression of 'length'.

There’s always been a rumour that the design proposal for Mazda was a design rejected by Alfa Romeo, but this is definitely not the case.

Bertone named the new concept design ‘Luce’ – Italian for light, and Giugiaro’s design was immediately embraced by Mazda, and scheduled for production with a 1500cc engine, and a four-speed manual. 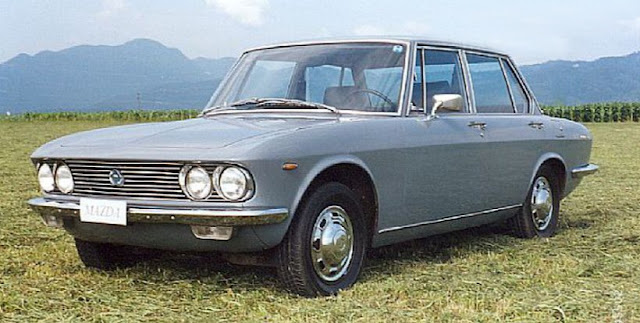 It was launched in 1965, and Mazda set the car world on its ear, with this delicate, sophisticated body by one of the car world’s greatest-ever designers.

The Luce, known in Australia just as the ‘Mazda 1500’ was an immediate success. A year later came the twin-carburetor SS version, and two years later the Mazda 1800.

Today, as we welcome the new Mazda 3 it is clear to me that the design team led by Ikuo Maeda, is informed by the spirit of the Luce.

I think the latest Mazda 3 is a definitive design statement by Maeda’s team that ‘styling is everything’ and the production car appears to have retained a lot of the original concept study’s themes, nuances and ideas. 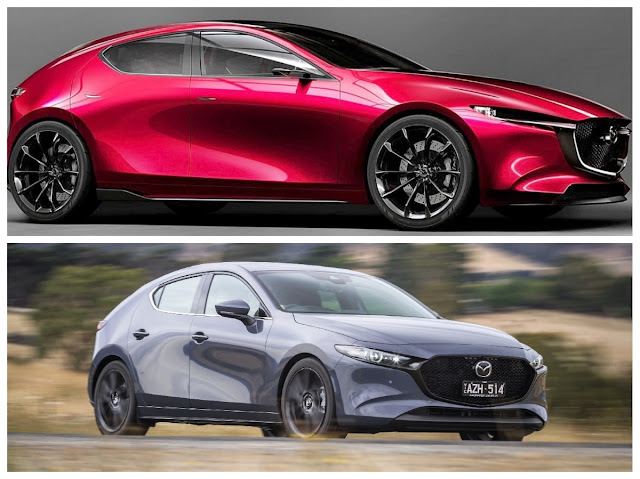 As a total product I don’t think the Mazda 3 is a complete success. There are many compromises, but the company is very clear about why it allowed design to be the 3’s preeminent consideration. 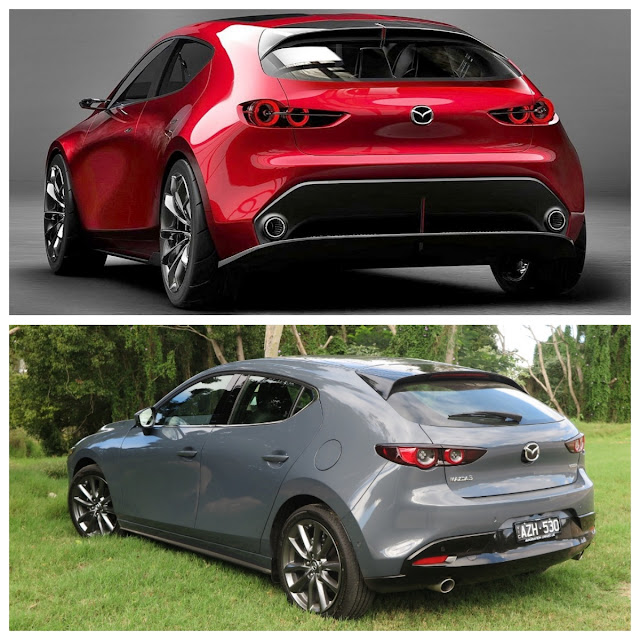 It is a ‘passenger car’ - if you want room for a family, you'll already be considering a CX-5 or CX-9. In practice the Mazda 3 has limited space in the rear cabin and some blind spots, mostly due to the thick C-pillars, and the rising rear side window line. There is also less space in the trunk.

The wheelbase has been increased, but overall length has been reduced. Where's all that increased interior room end up? In the front passenger compartment.

Mazda is in a way suggesting it’s a car for two people – a four-door sports car, maybe? However, as we wait for the appearance of the Sky Active-X engine later this year, the current car is no sports car. Its performance is adequate.

More later.
Posted by John Crawford at 8:44 AM