The short answer? It’s a bloody magnificent machine from pure Porsche genus. It’s everything you want a Porsche to be – blistering performance, impressive engineering, subtlety of line and surface, understated interior design and driving it leaves you wanting more.

If that’s what you expect from a Porsche, you won’t be disappointed.

“Yes, you say, but it’s an EV? Where’s the noise, the fusion of mechanical forces and feral feedback when you’re pushing to the limit?”

Believe me, this is a Porsche – true blue – that delivers its goodies in a way which elevates the Taycan to the top of the performance EV hierarchy.

Does it resemble any other model in the Porsche line-up? No, not really, it may seem linked to the Panamera four-door platform, but the platform is all-new, designed purely for EV use, but I think there are hints at how a four-door Cayman would look.

After sampling the Tesla Model S, I was prepared to give it ticks in all the boxes. But, after just a short drive in the Taycan, you can understand how Porsche has separated Taycan from other current high performance EVs. It is sheer sophistication in both art and mechanicals.

Not far from me is a road which winds up through hills on the eastern side of the scenic rim, which throws up a natural western border to the famous Gold Coast in Queensland.

Imagine, for a moment, the hills, valleys and cliffs forced up from below by the constant eruptions from the pre-historic Tweed Volcano.

Yugembah and Yugarabul are the major languages of the original inhabitants and, because of the difficult terrain, the Scenic Rim was not properly charted by white explorers until the early 1920s.

So, after noting the history and the current environment, I’m sure it’s not too difficult to imagine that the roads in the region are definitely ‘Taycan Territory’. 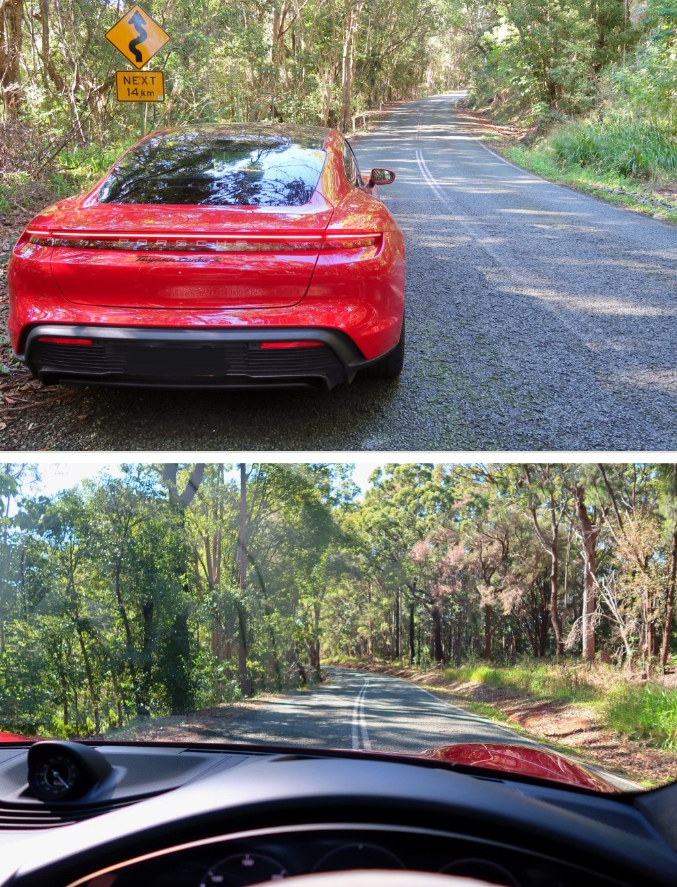 Driving the Taycan, I found it delightfully easy to lose myself in the pure, tactile joy of pushing this Porsche as hard as I dared – because its limits are way beyond my driving skills.

“Hold on", I hear you say. “I'sn’t this the guy who defames and vilifies electric vehicles? How can he justify his hypocrisy?”

Well, if you’re going to understand the apparent EV appeal then you have to drive them and appreciate the qualities which may or may not make them popular. I can see why the Taycan would appeal to those who can afford the buy-in price and are chasing performance, but also because it does have some positive elements, which I criticise as negatives in many other EVs.

It boasts a long range up to around 400 kilometres from a full charge, thereby almost negating ‘range anxiety’, and you can use its potential knowing that the Taycan delivers all of the Porsche performance values.

The straight-line impact and response is almost (almost) ludicrous - although I didn’t go there, and anyway it was Tesla that first introduced the ludicrous tag to the EV lexicon. 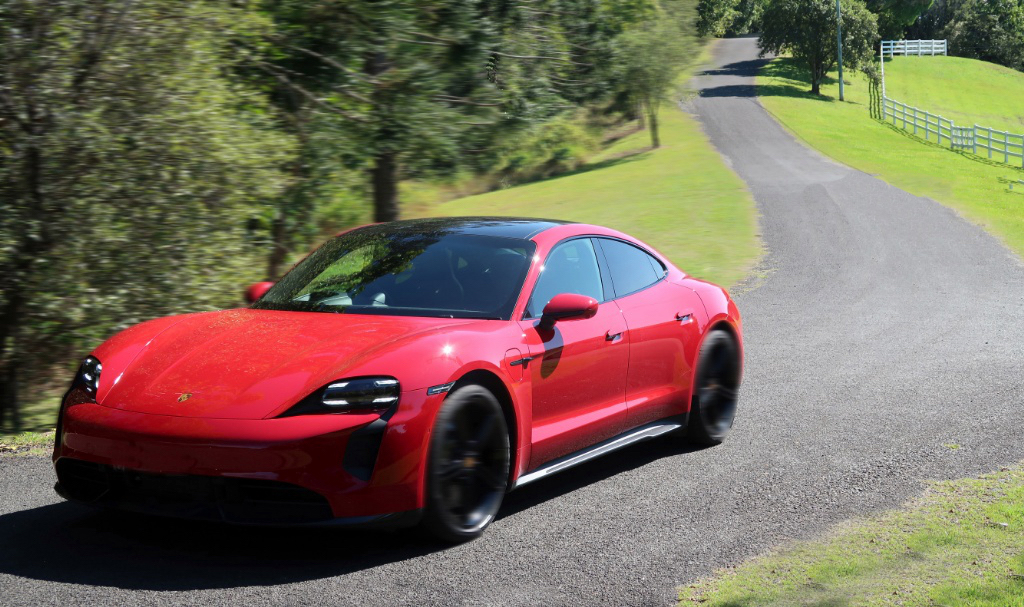 The Taycan’s handling is superb, and the brakes are awesome.

So, yes, this is a Porsche with every facet of the breed.

Now, the fun part. The price of the Porsche Taycan turbo S is AUD$385,500 (plus on-road costs), so this photo may be the only way some Porsche enthusiasts get to sample its awesome ability.

But, let me promise you, even a short test drive will have you lusting for more.

Posted by John Crawford at 2:38 PM