THIS ONE'S A ZINGER! by John Crawford

I’d like to say that in nearly 40 years spent fooling around with cars, working for car companies, writing about cars, and witnessing over the horizon thinking, I’d seen it all.

Well, of course, I haven’t, but I am certainly glad I’ve hung around long enough to hear LA-based Kevin Czinger talk about, not just a car, but much more importantly, how his company, DIVERGENT, makes the car you see here.

The Czinger 21C is a handsome brute, with fascinating details buried in its specification sheets and the computational effort which designs and creates the guts of the car.

Forget the car for a moment, just stop and think where Czinger is heading. It’s not completely unknown territory for those of us conversant with 3D printing and assembly. However, as far as the car industry is concerned what Kevin has pulled together will make Henry Ford roll over in his mausoleum.

Let’s start with the key to the whole shebang. It’s an acronym (naturally) – called DAPS. Which stands for Divergent Adaptive Production System. And, quite frankly, it’s more interesting than the car – although that alone is a breathtaking and really cool hypercar. It's a two-seater with occupants sitting one behind the other.

What Kevin and his really smart troupe have come up with is a totally new (also, tried and tested) way to create a complete car, and ALL of its parts on a computer, which then feeds the data into a bank of 3D printer process robots, and out the end of the sausage machine comes a fully-assembled car!

Kevin will be the first to tell you that Czinger is NOT a car company, but a developer of software and hardware which carmakers can license to build new cars at a fraction of the sunk costs that go into making a swathe of different cars for different buyers. Czinger’s plan is that it will fully-develop the system and then license it to OEMs. In fact, he’s already closely allied to BMW, Volkswagen and Ford.
Seperately, he has an agreement, and a confirmed project going ahead with Groupe PSA.

Not only does it save on capital expenditure (because it only spends on fully-complete, production-ready parts), but the whole DAPS concept means that by re-programming the data you feed in; you can get a completely different car at the other end, without the cost and time it takes to design, create, prototype-build, crash-test and ultimately roll out to a customer.

It’s also totally recyclable. Basically you take a Czinger 21C at the end of its life, melt it down, charge it with Nitrogen and it all dissolves into powder – which you can then use to build the next car! As TV’s Meerkat says “Simples”!

Kevin Czinger’s first go-around produced a prototype called the ‘The Blade’ (below) and it was enough to scramble Jay Leno’s brain when he came face to face with both car and its creator in his Burbank garage.

If you watch this clip, you'll also be impressed with how Czinger and his team also utilised carbonfibre and industrial-strength aluminium in areas where rigidity was key, but active tension did not mean they had to spend big on exotic materials.

Now, I’ve been to Jay’s Garage a couple of times and of course he has some pretty cool stuff – but, as Kevin Czinger talked, and did a walkaround of The Blade I could see Leno soaking it all up like a blotter, processing it, then waiting for the next tasty morsel of information to be laid out by a really remarkable guy.

When you look at individual parts created by the 3D printers it appears that the engineers actually 'designed' how the parts are shaped into such organic forms - but no, that's simply how the AI-driven algorithm created the shapes - to both optimize use of materials and also to create maximum strength and stress tolerance. But they sure are a work of art. 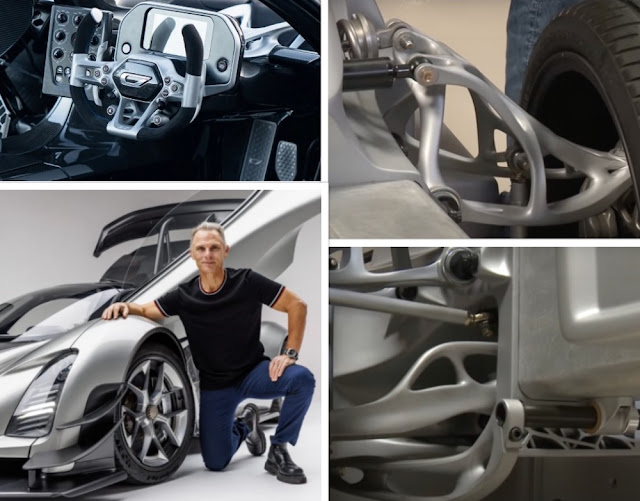 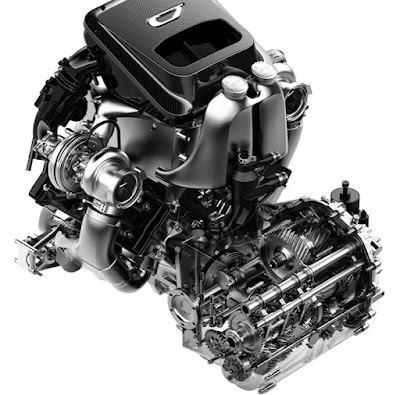 Kevin Czinger is a Yale graduate, who played college football, switched to Wall Street, then became an entrepreneur - the style of which I have never seen before. He’s confident without being cocky (That’s ‘cause he KNOWS he’s the smartest guy in the room), he’s wise, thoughtful, super-competent at what he’s talking about, and about as laid back as they come in California.

I watched the clip from Jay Leno’s Garage on YouTube and quite frankly I had to watch it twice to pick up ALL the stuff I missed first time around, as my brain was being jellied by Czinger’s concepts and his computer-like thinking, which I swear I could sense whirring around in his head. He’s one impressive guy, and he is going to change the way cars are made, single-handedly!

This car (above) is the 'track-specification' with a massive rear wing and prominent canards on the front splitter - a combination which can produce one ton of downforce over 200mph!

And, every element of DAPS is covered by 450 patents, so I'm guessing marques like Ferrari, Lamborghini and Konigsegg will have to go cap-in-hand to buy into this breakthrough concept!

It all appears unbelievable at first, but believe me, Kevin Czinger ‘s DAPS will become ‘a thing’! If it isn’t already.

The car? Oh that's just something they mashed up with robotic 3D printers! And there'll only be 80 produced!