It’s always sad to see an old friend pass away, which is exactly how I felt when Are Media, which acquired Wheels, Motor, Street Machine, 4x4 Australia, Which Car and Unique Cars, announced that it was closing down MOTOR magazine. 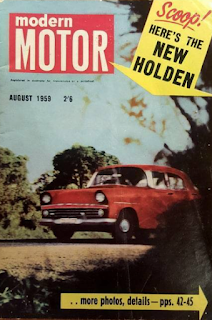 The magazine began life as MODERN MOTOR back in 1954, and to date has published 825 issues over 68 years. For most of its life it was in direct competition with WHEELS magazine, which always beat MODERN MOTOR in circulation. But it was MODERN MOTOR which initiated, and maintained the pursuit of still-secret new cars, hiding in the bushes with long telephoto lenses.

I am extremely proud to have been one of the many editors of this storied magazine, and also proud to have contributed to its reputation as a magazine which regularly broke news about still-secret cars. Wheels had much longer deadlines, which allowed MODERN MOTOR to get sensational news to the public much earlier than its esteemed competitor. MODERN MOTOR also took on a number of record-breaking adventures. 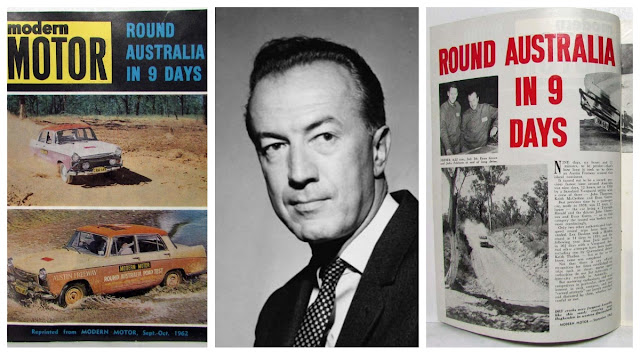 The magazine’s founding editor, Jules Feldman (above), hired me to take over the magazine at one of its lowest points. It was losing circulation and revenue, and had never pursued what the publishing industry termed ‘One Shots’.

'One Shots' were very profitable ‘occasional’ publications, because they were basically a mash-up of related stories which had previously been published in Modern Motor, utilising already existing artwork, with a brand-new cover.

I’m pleased to say that from 1972 through 1977 I and my motley crew managed to halt the slide in circulation, produce a number of profitable ‘one shots’ and lifted ad revenue to an all-time high. Having said that, it’s important to note that MODERN MOTOR simply was never able to match the outstanding standard of journalistic skill which was always a hallmark of Wheels.

However, during my time as Editor, we pivoted from just road tests and tech features to become strictly an automotive news magazine, and we continued the tradition of ‘scoop stories’ of secret new models.

We broke some major stories – among them the Holden Torana hatchback; the Holden Gemini (mistakenly called Torana), and the one I’m most proud of – the Holden Commodore in 1976 – a full two years before the first production car rolled off the line at Fishermens Bend! 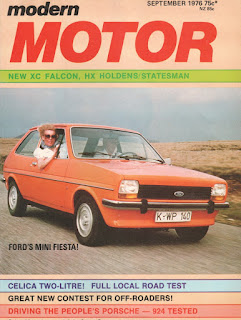 In the final two years of my tenure in the editor’s chair we did freshen up the cover artwork, changed layouts inside and gave the magazine a more contemporary look, thanks to a very creative and visionary art director called Alan Moult.

Many years later the then publisher, ACP magazines, dropped the word Modern from the title and it became just simply MOTOR.

I left the magazine in 1977 to compete in the Singapore Airlines London-to-Sydney Car Rally.

Farewell old friend, working with you was a true highlight of my  life and career among cars and car people.

Posted by John Crawford at 9:18 AM