If you spend a long enough time on this earth everything eventually gets recycled, often as something other than originally intended. In the car industry design firms have been doing some recycling – of ideas.
Here’s some amazing design stories, in no particular order.
Citroen once asked Bertone to design a new compact car, and it came up with the Xantia. A little while later Daewoo commissioned the Italian design house for its own compact car, and the Espero is clearly all-Xantia design cues from the front bumper back to the B-pillar.

Daewoo Espero
Alfa Romeo commissioned a new model from Pininfarina, and it delivered a concept car, which Alfa Romeo rejected. So, when Peugeot asked Pinifarina for a new car to replace the 505, it recycled the concept it had submitted to Alfa Romeo, and this car became the Peugeot 405. Then, oops! Alfa Romeo rejected its own in-house concept, went back to Pininfarina and said they would take its concept after all, and thus was born the Alfa Romeo 164.﻿

Peugeot 405
In 1990 Ital Design suggested a design concept to Jaguar which it called the Kensington. Jaguar rejected the design, but lo! The Kensington concept was reborn as the Daewoo Leganza. Actually, it was also used as the basis for the Lexus GS300 and the Seat Toledo!

Daewoo Leganza
In the early 1990s Jaguar began studies on a successor to the venerable XJ-S, and because of a joint venture with Tom Walkinshaw’s TWR Group some joint work was done on a concept called XJ-41. The project was too expensive for Jaguar and was stopped, but Ian Callum (who joined TWR from Carrozzeria Ghia) borrowed some of the fundamentals of the concept and created Project XX. Jaguar ditched that too, but this was the starting point for what would become the Aston Martin DB7.

Aston Martin DB7
In 1995 Ital Design proposed a sports coupe to Daewoo Motor, labelled the Daewoo Bucrane. However, there was no chance of this car going into production and the concept was put back on the shelf. Lo and behold, in 1997, the same concept was reborn as the Maserati 3200GT. See, no need to waste a good design! 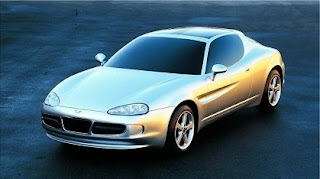 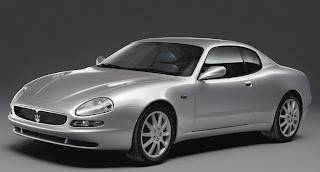 Maserati 3200 GT
Daewoo and Ital Design joined up again in 1998 when the Turin design firm took a concept it had developed for Fiat, codenamed Lucciola, and this was the design concept that went into production as the Daewoo Matiz. 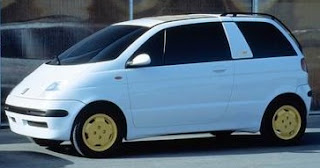 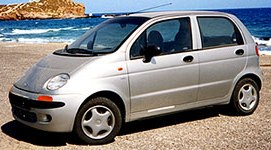