The Aston Martin DBS Volante literally leapt forward and launched itself up the steeply curving blacktop known as Laureles Grade Road, which links the Carmel Valley Highway with Interstate 68 in California’s Monterey County. 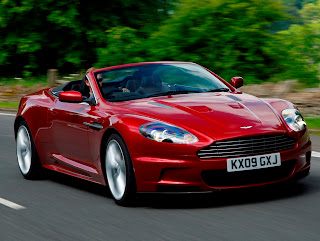 It was like holding the reins of a wild stallion as this British thoroughbred surged through the sinuous curves to the summit, and wound its way down the other side of the 1,300ft mountain. Then we turned around, scorching uphill again and back to base camp. Now, this is a test drive!
I had joined a small, and select group of Aston Martin owners, enthusiasts and prospective buyers at the swanky Bernardus Lodge in the Carmel Valley, to sample Aston’s latest sportscar. 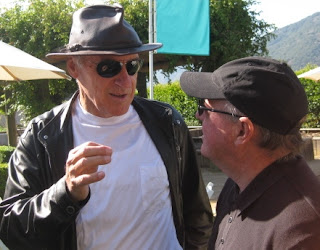 Discussing Aston Martins with Dr. Ulrich Bez in Monterey, California
Not for the first time did I come away really impressed with not just the sum of the parts, but the way it was screwed together, and performed its intended task.
A journalist once opined to Aston Martin’s COO, Dr. Ulrich Bez, that the VH platform architecture was not so much a platform, as a collection of aluminium ‘boxes’ welded together. Bez’s response was either a sniff, a snort or a sneeze; however, that journalist was not far from the truth.
Under Dr. Bez’s direction Aston Martin has developed an ingenious way of developing several different cars using the same basic parts. These ‘boxes’ can be large/small; narrow/wide, longer/shorter – it’s how they are put together, and how they are clothed.
Designers Henrik Fisker, and now Marek Reichman, have drawn shapes which are both contemporary and classic. Smooth, but purposeful, and possessing an appeal which delights both sexes. 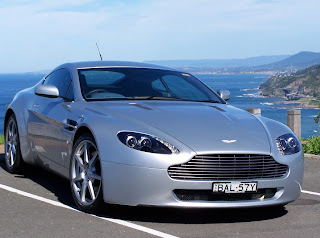 I have had the pleasure of punting an Aston Martin V8 Vantage down along the coast roads south of Sydney, and then winding back to the city via a hilly highway, to be completely seduced by the car’s snappy handling, and rorty performance.
I have also had the pleasure of touring almost half the length of Britain in a DB9 Volante, and just a small taste of the new Rapide in California.
These cars each have different personalities, according to their size, performance and handling package, but they share a DNA which is unmistakably Aston Martin. It’s a combination of sensuous styling, beautiful interiors and performance which does not leave you asking for more. 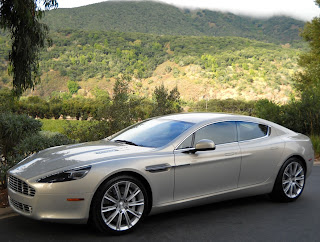 I think the new Rapide sporting saloon is a most wonderful example of Aston Martin’s ability to create automotive art, that works! It’s low, svelte and has four seats, although at 160cm tall, I probably fit better in the back seat than a man of 188cm.
What the Rapide has done is extend the popularity and demand for Aston Martins. The next two year’s Rapide production is sold out! 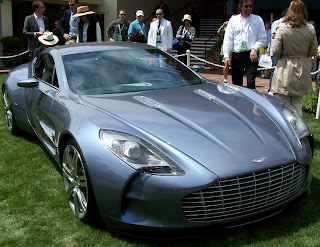 Then, of course, there’s the One77 – a supercar if ever one fitted that description. Only 77 being produced and they are just about all spoken for!
So, last year as I toured through the county of Berkshire on my way back to London I marveled at the ability of the DB9 Volante to surefootedly flash along country roads and respond to my steering inputs with pin-sharp accuracy; and then settle down as I joined the M4 near Heathrow to tootle into the West End with calm and aplomb. 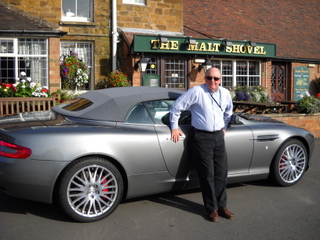 Ulrich Bez, I dips me lid to yer, sir! You’ve developed some mighty fine cars, and at the same time made Aston Martin a very profitable company. Couldn’t ask for more!
Posted by John Crawford at 4:47 PM