I wrote a short time ago about attending an exhibition drive at the Alfa Romeo test track at Balocco featuring the Alfa Romeo Tipo 33, and this encouraged me to research and expand on this very interesting racing car program.
The project began life in 1962 when Alfa Romeo SpA decided to get back into serious motor racing, with a dedicated racing company. Alfa Romeo had closed its own competition department in the late 1950s, but not before winning the World Championship in 1950 and 1951 with a Tipo 159 driven by the great Juan Manuel Fangio.
Famed racing engineer Carlo Chiti, who had worked in the Alfa Romeo competition department before it closed, returned from Ferrari in 1963.

Whilst at Maranello Chiti enjoyed a good relationship with Enzo Ferrari and he designed the distinctive ‘shark-nose’ 156 monoposto which Phil Hill drove to become the 1961 F1 world champion.

The plan was that Chiti would set up a separate company, called Autodelta, which would contract solely to Alfa Romeo. Of course Autodelta designed, developed and raced many Alfa Romeos, but it was in 1963 when Chiti designed the Tipo 33 and what many called a jewel-like engine.
Originally it was a 2.0 litre V8, but was later increased to 2.5 and then 3 litres. The Tipo 33 began racing in 1967.

That same year the company showed a concept car based on the 33 at the Turin motor show called the Iguana Stradale 33, designed by Giorgetto Giugiaro and Franco Scaglione.

In 1973 Autodelta developed the Tipo 33/TT 12, which featured a new tubular chassis and a flat 12, 3-litre 500bhp engine designed by Carlo Chiti. The car did not win until the Monza 1000km, but scored enough points to finish the 1973 championship in second place.

In 1974 Autodelta entered a car in the Nurburgring 1000km, driven by Arturo Merzario and another of my good friends, Brian Redman. The previous year Brian Redman had won that race alongside Jackie Ickx in a Flat 12 Ferrari  312B.

Brian told me that the Alfa Romeo T33 TT12  was fast, but like the Curate’s Egg, “It was good in parts.” He said the engine was powerful, the car lighter than the V8 by almost 100kg, but the team atmosphere was fairly chaotic and reliability was always a problem. Brian said that by comparison with the tightly-managed Ferrari team, the Alfa Romeo outfit was “pretty loosey-goosey.”

The Tipo 33/TT 12 was however a serious contender in 1975, with an important difference. Due to a lack of cash to splurge on motor racing, Alfa Romeo had virtually handed over the team to an enterprising German racer called Willi Kauhsen.
Kauhsen had good business connections and delivered handsome sponsorship from Italian drinks company Campari. He also brought along drivers like Derek Bell and Henri Pescarolo.
Derek and I have been friends for many years, but I only met Pescarolo once, at Le Mans in 1988 during Jaguar’s successful assault on the 24 Hour race.

Henri is a quietly-spoken, intelligent and talented race driver. He only talks when he has something to say, doesn’t hang out with the Champagne Charlies, and is thoroughly reliable.

Yet behind the wheel shows skill and resolve that everyone respects. Derek says if your partnered with Henri, then you are very grateful for his tenacity and talent. Mind you, those same qualities apply to Derek Bell, in spades!

Kauhsen not only took over running the team, but also sorting out the cars. Derek said the combination of Italian artistry and German management was a winner. Derek adds: “Quite frankly, the car was quite agricultural, but the engine was sweet and the 33 handled beautifully.”

Now, with both chassis and engine sorted, and a team of top drivers – Bell/Pescarolo and Ickx/Merzurio – 1975 had great potential.

Derek distinctly remembers the 1000km at Spa, and beating Jackie Ickx on his home circuit. He says that was ‘delicious irony’.
The Alfa Romeo 33TT-12s dominated the season with seven wins in eight races. Derek and Henri won three, and finally after years of struggle Alfa Romeo won the World Sportscar Championship. In 1976 however the Championship was totally dominated by Porsche.
It was Chiti's dream to dominate the race, but it wasn't until 1975 that the Tipo 33 was victorious.

Alfa Romeo won all eight events of the WSC in 1977 with a brand new Tipo 33 SC12, featuring a turbocharged engine and a monocoque chassis.
However, by the end of 1977 that was it. The WSC dwindled away to non-existence, and Autodelta became involved in a variety of other programmes using Alfa Romeo production cars.

By 1978 Carlo Chiti had formed a relationship with Brabham, and Niki Lauda won two races that year with a Chiti Flat 12-engined Brabham BT46. 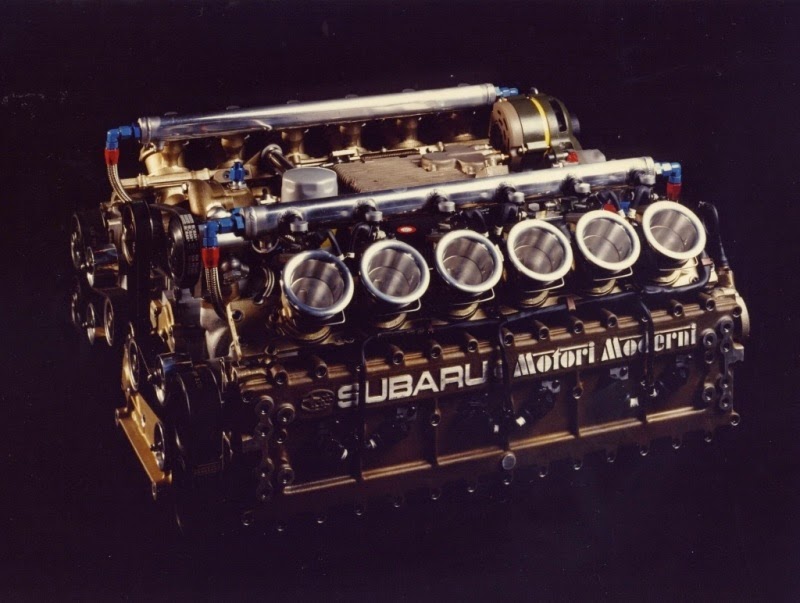 A sidelight: Later in 1984 Chiti’s company Motori Moderni slightly re-designed the Flat 12 engine for Subaru, which supplied it to the Coloni F1 team for the 1990 F1 season.

NOTE: I’ve used a couple of photos from a wonderful series featured on the website <velocetoday.com> called ‘Inside Autodelta’ which are the recollections of a young American apprentice at Autodelta, called Robert Little. It’s a wonderfully warm and intimate portrait of the company.
Posted by John Crawford at 7:55 AM