In April 1945 Charles Spencer King joined the Rover Car Company, which was then run by his uncles Spencer and Maurice Wilks. He had previously been apprenticed to Rolls-Royce where he worked on the jet engine project initiated by British engineer Frank Whittle.

The Wilks brothers foresaw an automotive application for the gas turbine engine and ‘Spen’ King was assigned to work on the project with his associate Gordon Bashford. 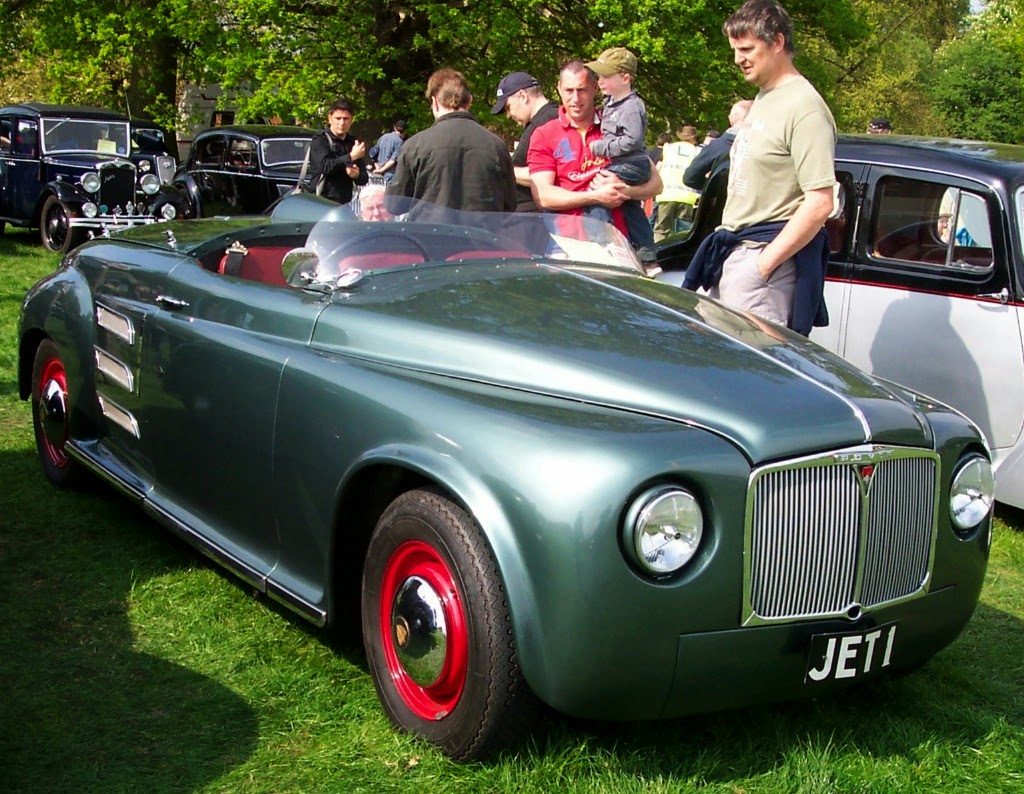 They did successfully design cars, the T3 and JET 1, which were powered by turbine engines, the JET 1 became the basis for the Rover-BRM turbine car which competed and finished at Le Mans in 1963.

Despite producing a prototype, the T4, ultimately the idea was dropped because of poor fuel economy.

However, the fertile brain which had conceived the innovative design of the turbine cars, was then unleashed on a project to design a replacement for the ageing and stodgy Rover P5. 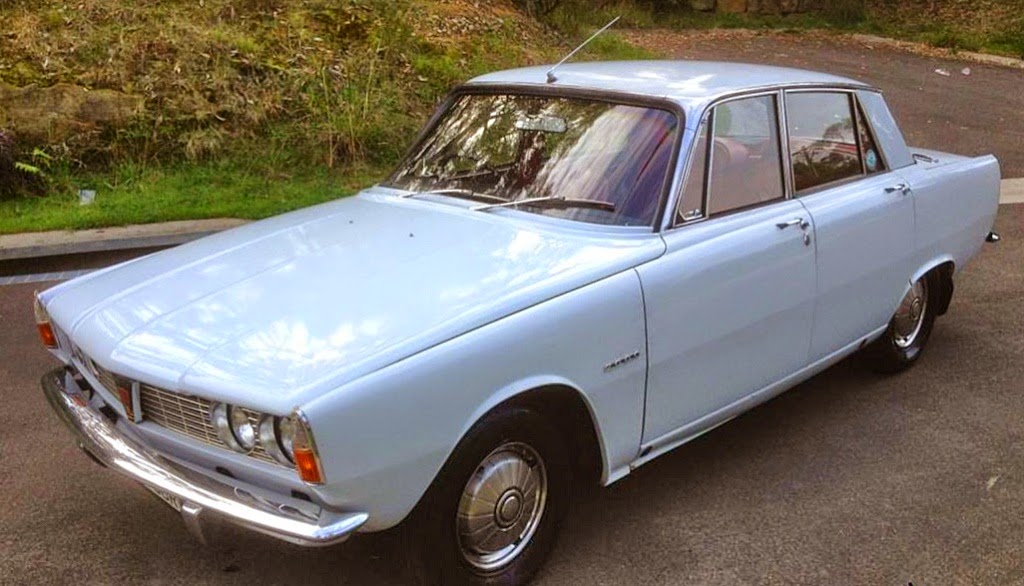 Reading the Wikipedia entry for the P6 I was dismayed to find the article did not include any details of the car’s designer and his colleagues, so on the 70th anniversary of Spen King joining Rover, I wanted to pay tribute to my good friend of 32 years.

It was conceived as a ‘safety car’ (long before Volvo ever assumed the mantle) alongside the only other car with a reputation for protecting its occupants, the Mercedes-Benz S500. The chassis or ‘frame’ of the P6 was designed as a monocoque which resulted in a ‘cage’, surrounding the passenger compartment, and the unstressed outer body panels were merely bolted to the chassis.

The engine bay was originally designed to accept a gas turbine, so it was wider than it needed to be for a conventional engine, and the turbine size requirements also resulted in an innovative front suspension. 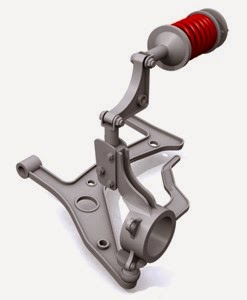 The vertical suspension movement forces were carried via a forged ‘L’ crank, to horizontally-mounted coil springs which pivoted from a location point on the front upper cross beam (or firewall).

The rear suspension was an adaptation of a ‘de Dion’ concept which featured the differential fixed to the chassis, and the wheels suspended by trailing and leading arms, and a de Dion tube, which also telescoped horizontally so that rear wheel camber settings could be maintained throughout the range of vertical motion by the rear wheels. 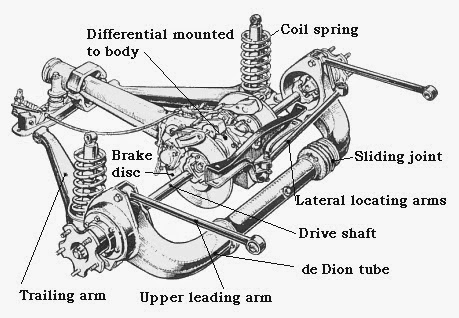 Unfortunately the innovative rear suspension took up a lot of space, which resulted in inadequate trunk room, thus the familiar site of owners mounting the spare wheel on the trunk lid, so there was more room for luggage. 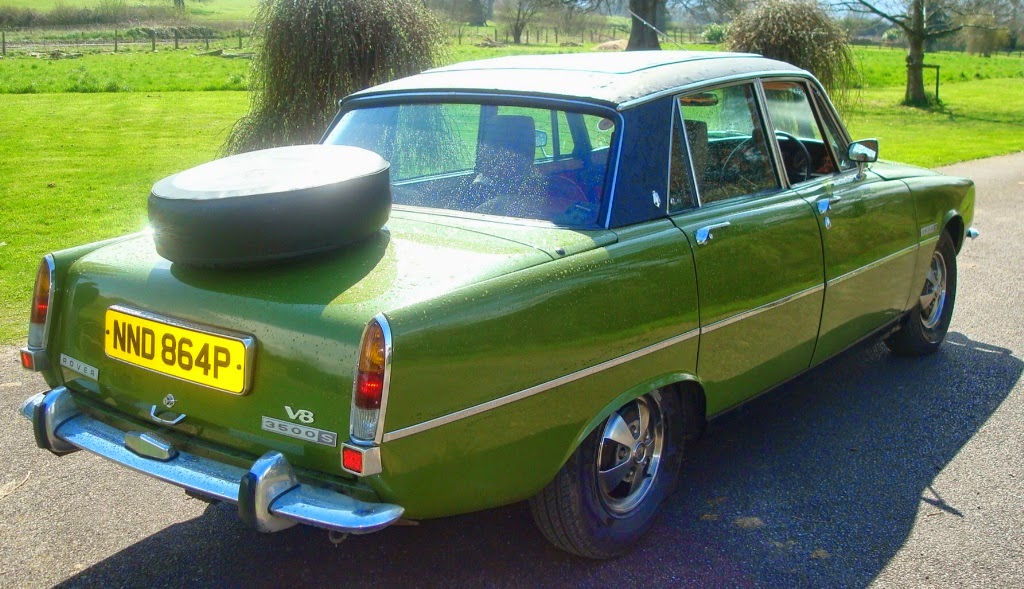 Also, the design of the cabin meant that the P6 was really only intended to take four occupants, in four finely sculptured individual seats.

In my conversations with Spen during our friendship he was at great pains to point out that all the engineering work on P6 was a collaborative venture with his friend and colleague Gordon Bashford.

The styling came courtesy of another longtime associate, David Bache.

Bache was a ‘modernist’ just like King and Bashford. The three of them embraced new ideas, new ways of doing things and Bache’s design for the P6 was unlike any British-designed car to date. It probably was more American than anything else, with its rakish pillars and streamlined fenders.

The P6 featured a brand new four cylinder 2-litre engine, with a cast iron block, aluminium cylinder head, with Heron-type bowl in piston combustion chambers. The problem with this engine was that it lacked refinement, and clearly was underpowered. Later the power was boosted by a twin carburetor model; then capacity was enlarged to 2200cc – and finally, Rover fitted the Buick-based 3.5 litre V8 – which solved any lack of power issue.
I road tested a V8 Rover P6 in Australia in 1970 for MODERN MOTOR magazine, and my most overwhelming memory was incredible understeer! If you didn’t set it up for fast corners you were off the road at the exit!

Later I drove a privately-owned 2.2 TC, which was a much better balanced car to drive.

Sadly, the Rover P6 was the last innovative and truly inspired sedan car design to come from the Rover team of Bache, Bashford and King.

The next car from British Leyland (which had absorbed Rover) had compromise written all over it. The Rover SD1.

The design and engineering was dictated by a host of bad management decisions from the huge conglomerate. Funds were limited, and the car was intended to replace both the Rover P6 and the Triumph 2500. Funding demanded more conventional engineering, including a live rear axle and rear drum brakes!
David Bache’s design was inspired by Ferrari, but Bashford and King’s engineering solutions were more pedestrian.

Despite the compromises, the SD1 won Car of The Year in 1977. It even became a racing car, when TWR competed in the European Touring Car Championship! 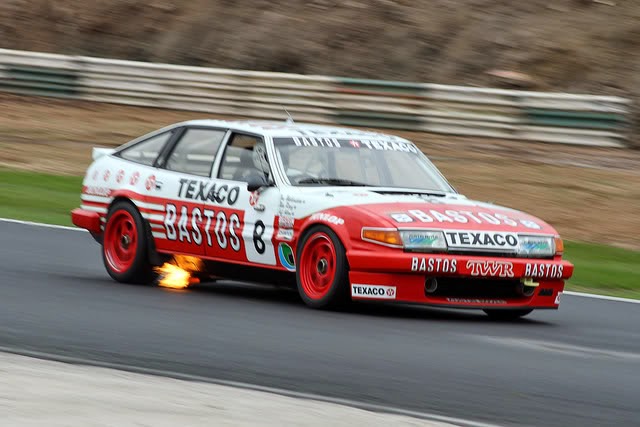 I first met Spen King when we brought him to Australia in 1979 to help launch the SD1, and during a break between the Media Launch and the Dealer Launch, we drove down to the NSW ski resort of Thredbo. 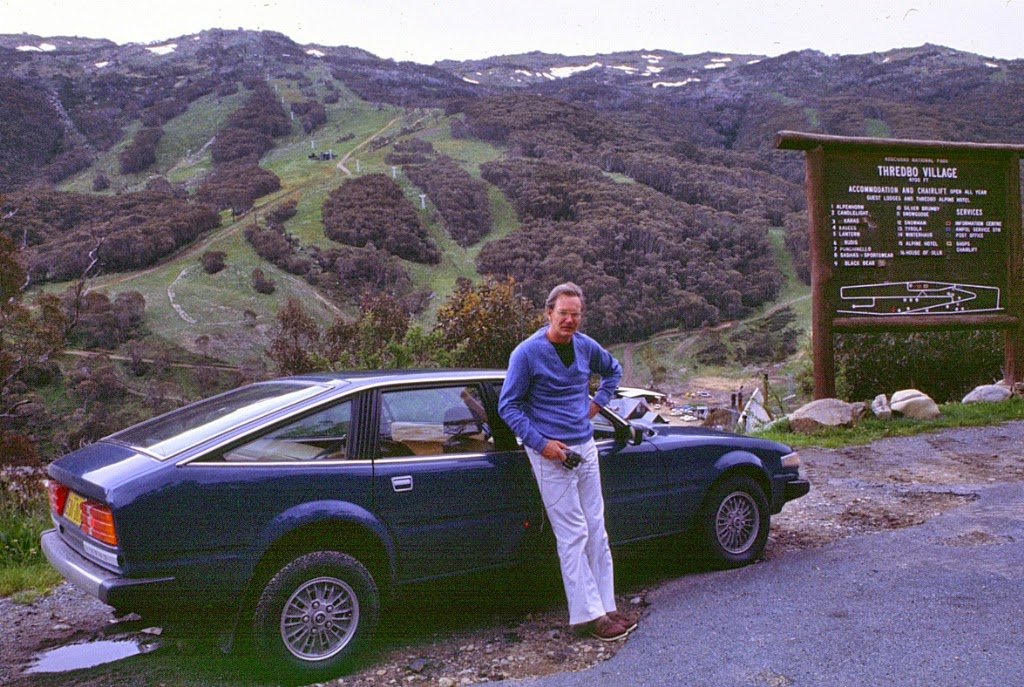 Even though it was April, we endured a freak snowstorm. 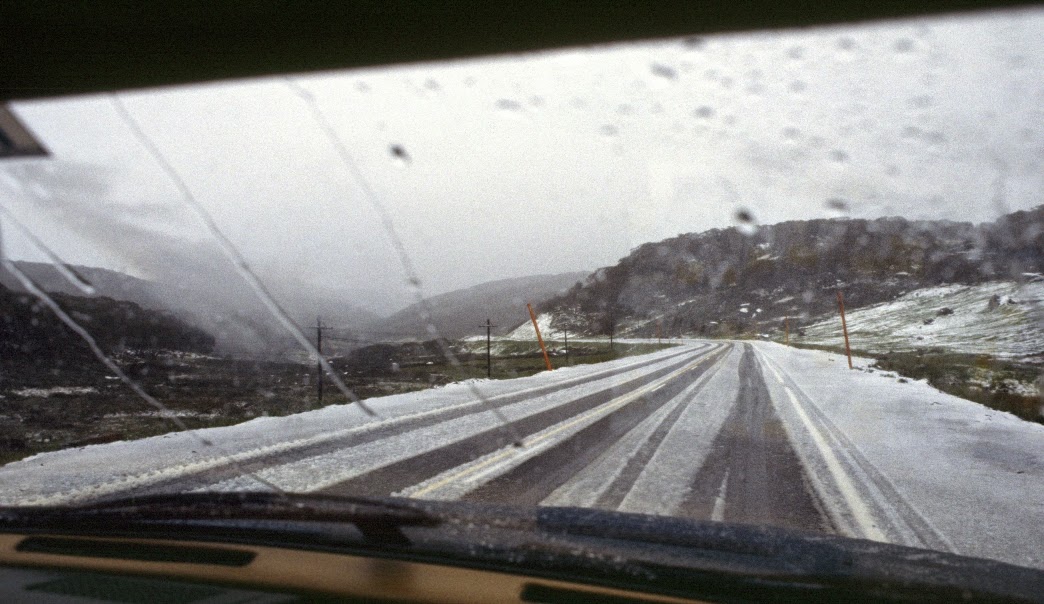 However, in the privacy of the SD1’s cabin Spen told me of his continual frustration over the design compromises forced on him by the BL management and the dictates of the program. After arriving in Australia he also found that despite promises from the workforce at Solihull, the quality of the first cars sent to Australia was abysmal.

In fact he said that despite any innovations he and his team were responsible for at Rover, they were always let down by poor workmanship and quality problems on the production line.

Spen lived in the Old Manor House in Cubbington, near Warwick in the English Midlands, 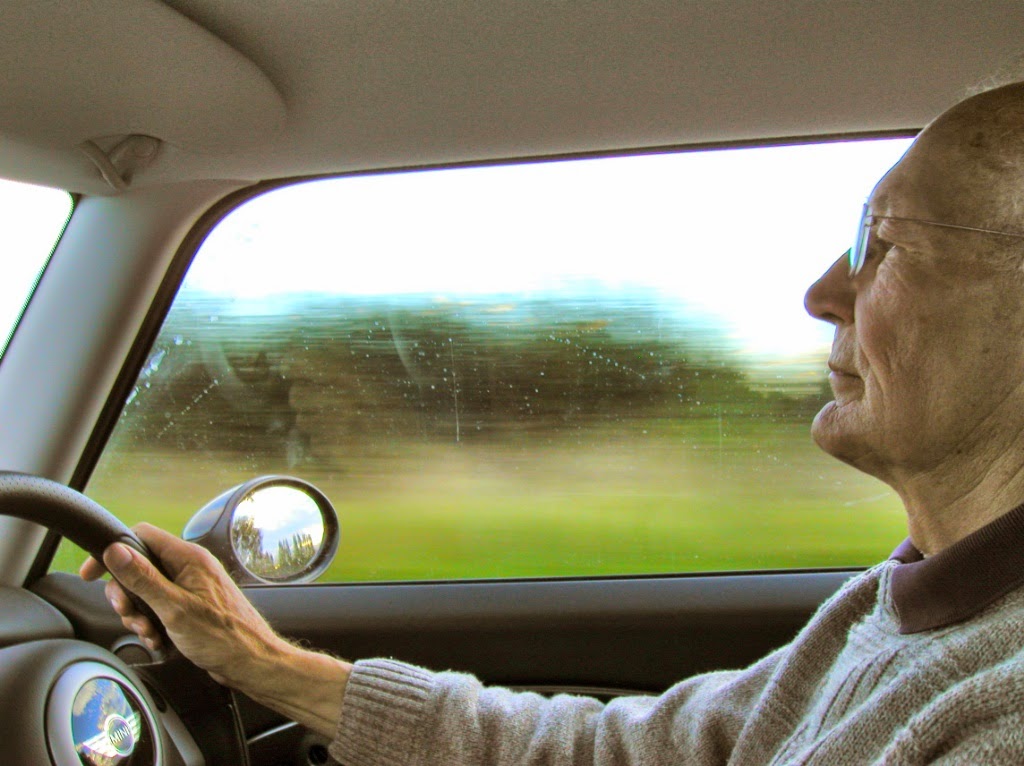 In late 2005 we took his Mini Cooper for a blast around the local area, a few years later he was forced to stop driving, due to a detached retina. I visited him right up until his death in 2010, when sadly he died after a bicycle accident in his village.

We always shared an interest in cars and skiing, and enjoyed many long discussions about car design and engineering. His proudest achievement, he said, was the finalization of his ECV3 project, an innovative, three cylinder small car, which could achieve 100mpg!
It's no surprise that BL management told Spen they couldn't see a need for such a car!

As I write this Reqium for the Rover car company, the respected Rover name now lives on via the Land Rover company; along with Spen King’s incredible reputation for innovation and design initiatives in the car he is most famously responsible for, the Range Rover.