Johnny Goss - over the last 50 years of Australian motor sport his name is synonomous with the image of a real racer, a true battler, and a mercurial personality known for an unusual turn of phrase.


Trackside, the race fans loved him, fellow competitors respected him, the media adored him, and he possesses a gritty determination to succeed.

In 1980 when the Barclays Triumph TR7 Pro Car series was about to debut, I hired John as one of the seven professional drivers to contest the series.


He was a natural choice. He loved to race, enjoyed a colourful reputation as an entertaining driver, and he was great to have around.

I was PR Director for Jaguar Rover Australia at the time, and after the final TR7 race I took a call from John, who presented me with his plan to campaign a Jaguar XJ-S in the Australian Group C Touring Car Series.

His requests were predictable; Could we sponsor his program? If not full sponsorship, could we make parts available for free? If not free parts, could we help him get access to Jaguar in Coventry, and subsidized parts? 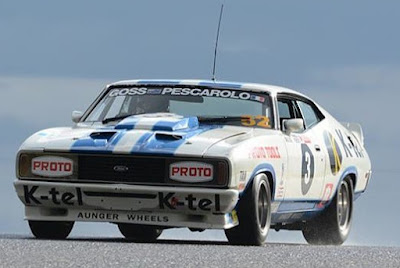 Now, as I said, John Goss was a well-known and talented racing driver, mostly at the wheel of Ford Falcons,
and he’d previously won the Bathurst 1000km race in 1974,

However, Gossy's mercurial personality and colorful racing history was reason to pause and consider.

Any investment in Gossy’s Jaguar campaign was risky, because it put Jaguar’s image and long, illustrious, motor racing history in the care of a single individual, whom I wasn’t convinced had thought this thing through.

Yes, it sounded good, but could we afford to have a privateer try, and fail to win with a car which most motor sport experts would say was not really suitable for the Touring Car Series?

Ultimately, as far as John Goss and I were concerned, I discovered it was hard to say no to him. He had great energy, enthusiasm and passion for the project and his plan sounded convincing. That is, until you weighed up the risks – which were huge. However, I NEVER doubted his integrity or his determination!

I was able to enlist the help of Jaguar’s Head of Engineering, Jim Randle, because John Goss had gone to Coventry at his own expense and introduced himself to Randle, who developed a soft spot for the irrepressible Aussie.

Between Randle and I we were able to source a few parts to help build Gossy’s racing XJ-S, and even airfreight a lightweight XJ-S body shell, and specially-developed crankshaft out of Jaguar’s racing parts bin from Randle’s 'back shed' at Coventry.

Slowly, the car took shape. Gossy didn’t really have sponsorship, as we know it. By that, I mean cold cash. He had a lot of contra deals, which he feverishly traded for cash to buy parts and pay for tuning and prep costs. He certainly was creative in how he bartered BS for funds.

The car ran at Bathurst in 1980 and 1981, but despite his tireless efforts it failed to finish both times.

First time, the standard gearbox broke, then in 1981 oil surge resulted in engine failure. Then in late 1981 he presented a hair-raising plan to me, suggesting that we fly out American Jaguar team owner and racer, Bob Tullius, as a co-driver for the 1982 race!

He also suggested that after many conversations with Tullius, the American was prepared to send him some ‘hot bits’ to help make the car competitive.

Once again, I couldn’t say no. I had to do some fast talking to convince the Directors of Jaguar Rover Australia that this was a good idea, and promised to crank up the PR machine to get as much mileage as possible out of the program.

I knew Tullius only by reputation, but it was gilt-edged. Bob had been racing various cars for British Leyland; then Jaguar Rover Triumph; then Jaguar Cars, since 1961, and he had knotched up a very impressive record of individual race wins and series' championships.

His Group 44 team had delivered Bob's E-type Jaguar into road racing victory circles 12 times in 20 races. I asked Bob the secret of his V12 E-type's reliability, and he replied succinctly, the single most important element was dry-sumping the engine. So there was no doubt that Bob Tullius was a great asset, and a PR dream.

He stepped off a Pan-Am Boeing 747SP after the 18 hour flight from Los Angeles looking as fresh as a daisy. After some publicity photos, Bob flew to Bathurst to join the team.

Just having Tullius in the Jaguar prep tent was worth the airfare alone. He was able to provide advice, tips and expert knowledge gleaned from his vast racing experience, and when Gossy put in a practice time six seconds faster than he had ever previously lapped Bathurst in his XJ-S, the 1982 James Hardie 1000 was looking very promising for the team. 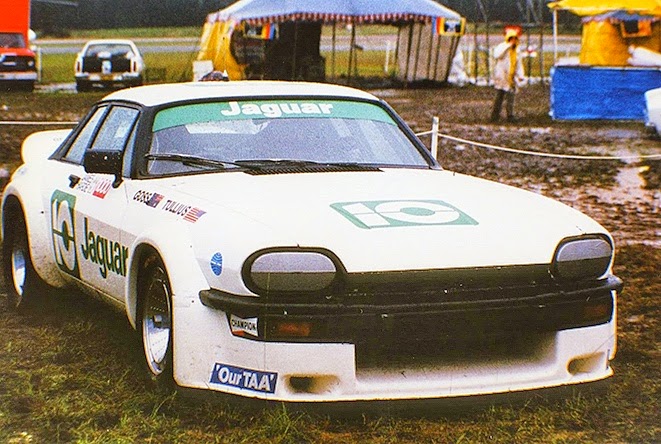 Sadly, the car succumbed to suspension failure on lap 119 and I drove a subdued and disappointed Bob Tullius back to Sydney Airport for his return flight home.

However, he raved about what a great guy John Goss was, and how Gossy had put it all on the line for both Jaguar and Tullius – the only problem was; he was an individual without the necessary funding for a really serious race program, and he was racing a car that was a challenge on every front.

I subsequently went to visit Bob Tullius in Virginia, USA, later in 1982, and was introduced to his highly-professional Group 44 race team, and its equally impressive crew.

That visit forged a friendship which has lasted 33 years, and in March 2015 it was delightful to be able to visit Bob at his base at Sebring Airport, in Florida, and catch up. More on the incredible Bob Tullius will follow.

Oh, and what about John Goss and the Jaguar XJ-S?

In 1985, financially-assisted by Jaguar Rover Australia, Gossy won the James Hardie 1000 at Bathurst with co-driver Armin Hahne, in a TWR-prepared Jaguar XJ-S – a fitting result for a guy who really (always) gave it his best!

Posted by John Crawford at 7:56 AM