A PRINCE OF A CAR

The 2017 Nissan GT-R and NISMO GT-R may not initially be considered Porsche competitors, with a storied lineage tracing heritage back to 1931, but their origins are no less distinctive.

After WW2, Tachikawa Aircraft Company, which made aircraft for the Japanese army, was dissolved and renamed Prince Motor Company in 1952, to honour Prince Akihito’s formal investiture as Japan’s Crown Prince. 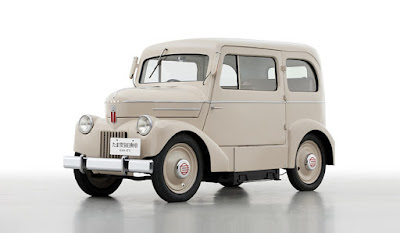 Its first car however, a revolutionary electric car called the Tama, was built back in 1946!

Fast forward to 1962 and Prince became the first Japanese car company to enter a car in a European competition – the Liège-Sofia-Liège Rally. The Prince failed to finish, but don't feel too bad for the Japanese beginner. The attrition rate that year was 82%!

Two years before the merger, Prince had introduced the S54 Skyline GT, with a 105hp straight six, designed specifically to compete in the Japanese Grand Prix (held for closed cars, not open wheelers) on the incredibly fast Mt. Fuji speedway.

The race was won by a mid-engined Porsche 904, but Prince S54s finished second through sixth, and were not disgraced.

Then in 1969 two Nissan-entered R380s came first and second in the Chevron Paradise 6 Hour race held at the Surfers Paradise Raceway, just three kilometres from where I now live!

Many of Nissan's contemporary performance cars were created by the old team of Prince engineers, using skills, talent and experience honed over decades of competition. Never more so true than for Nissan's NISMO track cars.

In reality the cadre of Prince-bred enthusiasts have become an internal 'skunk works' inside Nissan, even today, and have been responsible for many of Nissan's most impressive high performance cars. Those whom I've met over the years have been wonderfully warm, dedicated guys retaining great enthusiasm for their work, and engineers of the highest integrity.


The reason I am laboring over this detail is to underline the fact that Nissan’s racing coupes (nee Prince) boast an impressive history, and that many times the Japanese Samurais have competed on an equal footing with the German warriors from Zuffenhausen, including Porsche's happy hunting ground in France, Le Vingt Quatre Heures du Mans.

Posted by John Crawford at 9:08 AM