NICO ROSBERG - A WORLD CHAMPION IN EVERY RESPECT

So Nico Rosberg is Formula One World Champion and has immediately announced his retirement from the sport. Well done Nico! A very ‘brave’ decision, but I think it’s the right one for him.

I have admired Nico Rosberg throughout his F1 career as a ‘racer’ and a thoroughly nice guy. At the 2010 Australian F1 GP, I was hanging around Red Bull waiting to interview Sebastian Vettel and Christian Horner, and Nico came in to see if he could speak with Vettel. It was obvious the crowd made that impossible, and he started a conversation with me. When it became clear I was a close, personal friend of Stirling Moss, he warmed to the conversation and we discussed a whole range of issues in just 15 minutes.

As I thought we were finishing the conversation he said: “Would you like to come into our pit and have a look at the cars?” I accepted immediately and he personally took me through the team garage, introducing me as a good friend of Stirling Moss.

He was gracious, friendly and businesslike. Time to return to work, he escorted me from the garage. As I left I thought, “What a great guy, being so nice to a nobody.”

The other thing I admire about Nico is his ‘take no prisoners’ racing style, and his sportsmanship. In that regard I have lifted the following text from my friend Joe Saward’s F1 Blog to illustrate the true mutual respect he shared with teammate Lewis Hamilton:

After the race in Abu Dhabi on Sunday, Lewis Hamilton said the following, in his first public statement after the race. “A big congratulations to Nico, of course, his first world championship. Good job, man”.
Nico said: “I also want to say congrats to Lewis, you did a great season, great competitor, massively quick always. Congrats, always tough to beat you.”
A few moments later, Lewis added: “I did everything that I could, particularly towards the end and obviously Nico had a very, very clean year without any real issues to be honest and that’s why we sit in this position right now. But he did a fantastic job, so big congratulations to him, it’s a great feeling to win the world championship and I look forward to fighting with him next year.”
Sporting? Both men were. The stuff written since then is 24-carat crap. 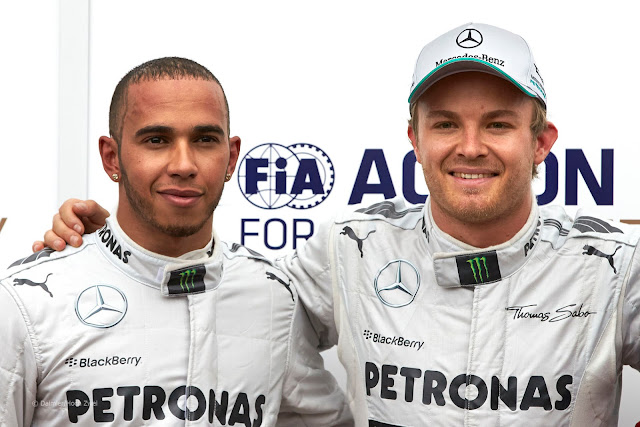 During his F1 career Nico won 23 Grands Prix, capturing 30 pole positions. He is the only driver to win the Monaco GP three times in a row; and the only driver to win seven GPs in a row. A pretty enviable record, and I think it’s great that he has decided to retire at the absolute peak of his sporting life.
Posted by John Crawford at 6:01 PM