FORD MUSTANG - A PONY CAR BRED FROM A BIRD

Ford’s Mustang reached iconic status a long time ago. It was the original ‘Pony Car’ – meaning a lightweight, high performance ‘American’ sportscar - cheap to build, and cheap to buy.

Its success is measured in millions – both in sales volumes and profits. But, boy did it have humble beginnings.

In 1961 Ford’s engineers in Dearborn began playing around with a concept a long way from the Pony Car which came to market.

The 1962 Mustang I concept was a small, lightweight, two-seater with a wedged shape, one–piece aluminium body riveted to a tubular space-frame chassis and powered by a German Ford Cardinal 1.5L V4 engine. It also featured four wheel independent suspension and front disc brakes. This was leading edge stuff for the Dearborn guys.

Design was by Eugene Bordinat, and Exterior Designer John Najjar positioned the small engine right behind the driver. The seats were fixed, and the foot pedals could be adjusted to suit the driver.

Ford built only two cars – a fiberglass mock-up, and one running prototype. The company revealed the prototype at the US Grand Prix at Watkins Glen in October 1962, driven by Dan Gurney, who drove the little concept car so hard, he lapped just seconds slower than the F1 cars! 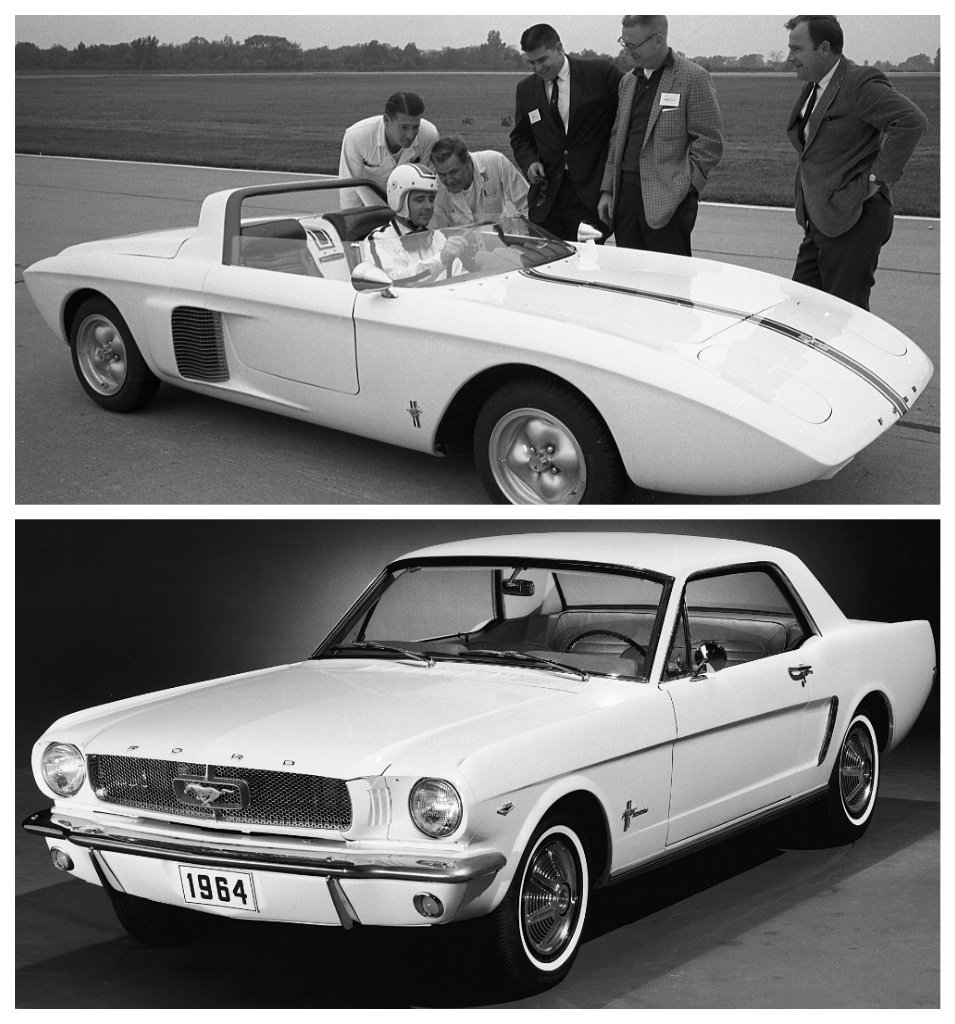 So, what happened? Mustang 1 looks nothing like the Mustang we’ve come to know.

Lee Iacocca was an early champion of the original concept, but bowed to pressure when the whole thing was re-imagined and redesigned as a much more conventional coupe and convertible. Mustang was launched in 1965.

The original business case was reduced to laughing stock very quickly. Ford’s numbers guys said the company would sell less than 100,000 cars. In the first 18 months, Ford sold one million Mustangs – which is not hard to figure when you see the price – USD$2368!

Now, to the humble beginnings. Once the dealers got wind of it, Iacocca wanted the car on sale asap.

The original Mustang borrowed heavily from the humble Ford Falcon.

Most of the running gear, the platform, the six-cylinder engine, the 3-speed auto transmission, and suspension all came from the family Falcon. The only element which survived from the concept car, were ‘fake’ louvres in front of the rear wheels.

However, given the humble bloodline, the Mustang came on sale within five months of being signed off!

Ford and its dealers started making money straight away. The long-standing residual affection for the Mustang continues to bring sales success, almost regardless of shape.

Let’s fast forward to 2018, and the latest convertible is ‘On My Drive’ and what a pleasure it has been to drive it. 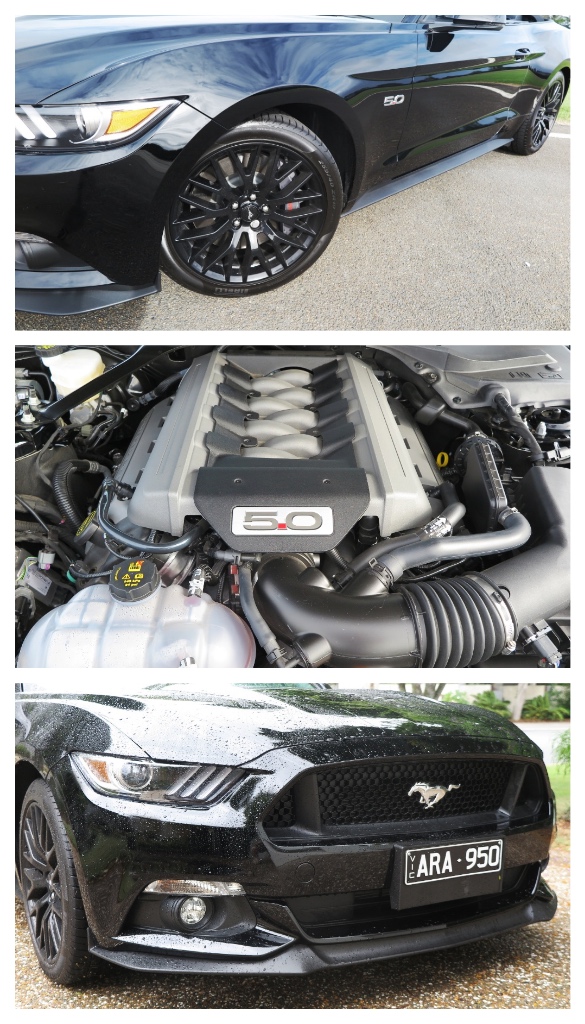 Powered by a 5.0L V8 the Mustang has tons of power, a surprisingly stiff body, and pin-sharp handling.

Although, if it’s rainy and greasy, the GT is very tail-happy. Actually, if I'm truthful it can be a handful, despite the grip provided by the Pirellis. 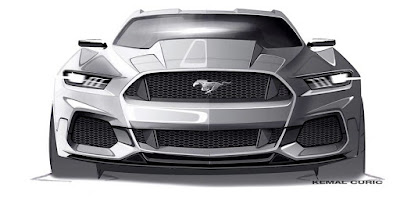 The original design sketches for the 2014 concept are credited to a Croatian designer from Ford’s Cologne studio, called Kemal Curic.

However, after some clinics, and a Board level pow-wow his initial theme was junked, and the whole design team worked to come up with the shape you see on my driveway. 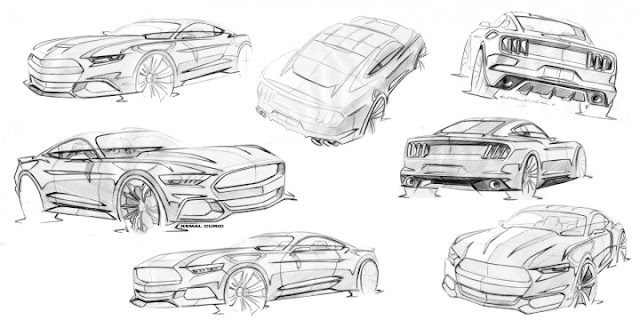 The program was overseen by Group VP of Design J Mays, but both Moray Callum (Director of Design, The Americas), and Joe Piaskowski (Exterior Design Director) had considerable influence on the outcomes.

I think Interior Chief Doyle Letson, and Interior Manager Bill Mangan, deserve mention too, for a good job on the interior.

It certainly is evocotive of the original ragtop Mustang. 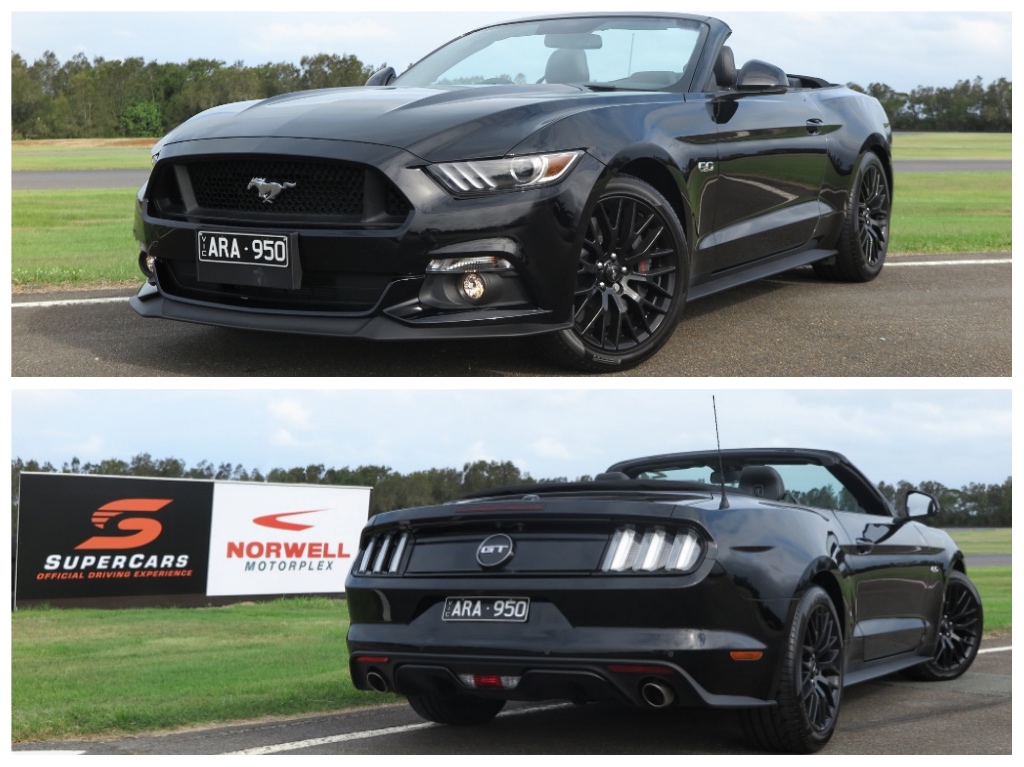 Like I said, it’s a very successful formula – although just lately sales have wobbled a bit. In 2016 just over 6200 Mustangs were sold Down Under, and 9165 were sold in 2017 – but that doesn’t tell the whole story. Sales have been on a downward slide over the last six months.

Part of that may be due to a scare story about Mustang only achieving TWO STARS in the ANCAP crash tests! That’s something that will definitely cause a hiccup in the sales charts for any affected car. 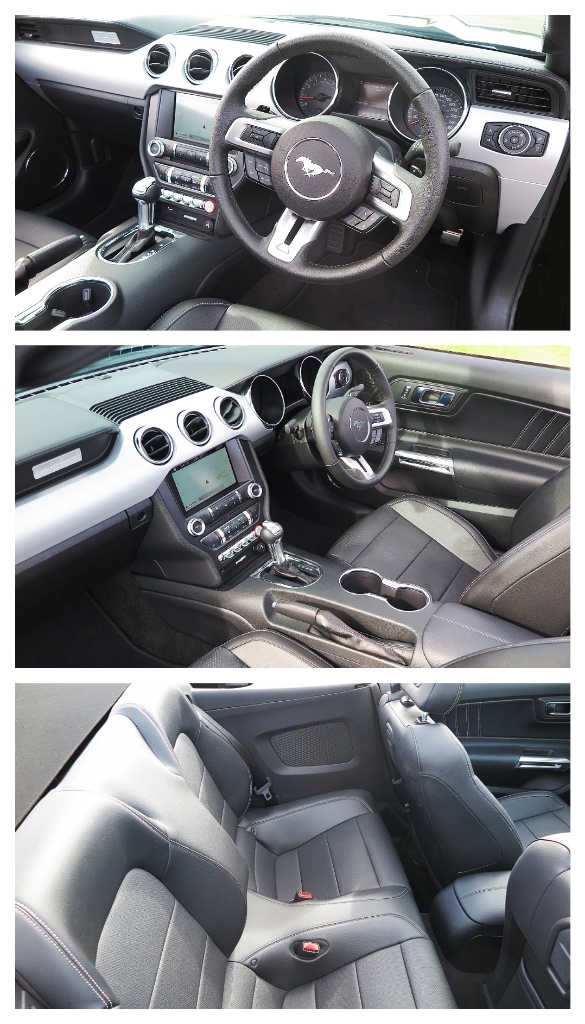 Turns out that occupant safety is not the issue, but the lack of some electronic whizzgiggery, which Ford has now decided to include in the specs sheet.

However, the whole issue has been embarrassing, because ANCAP made sure its press release got maximum media coverage, with the motoring scribes pointing out that the last car to achieve TWO STARS was the Chinese-built Chery hatchback back in 2011.

I have no doubt that the current Mustang will protect its occupants, but it’s a concern that Ford’s engineers appear to have produced the ‘Dog Ate My Homework’ excuse for why it failed in the first place – especially if it was just a failure to include some high-tech software.

I like this car, but my first impression from the driver’s seat was that I was looking out across the deck of the Fleet Battle Carrier.

The hood goes on forever, and your only way to figure out where the front is, is guesswork, or a bump! 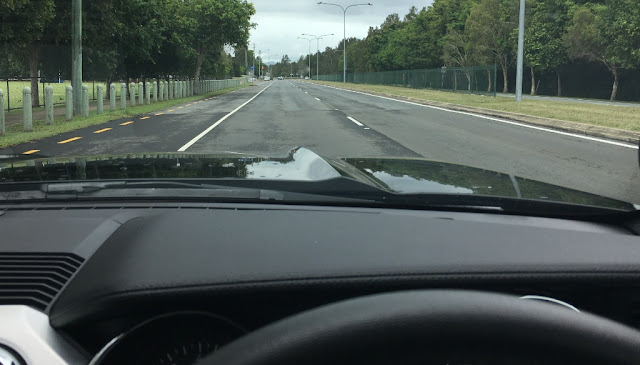 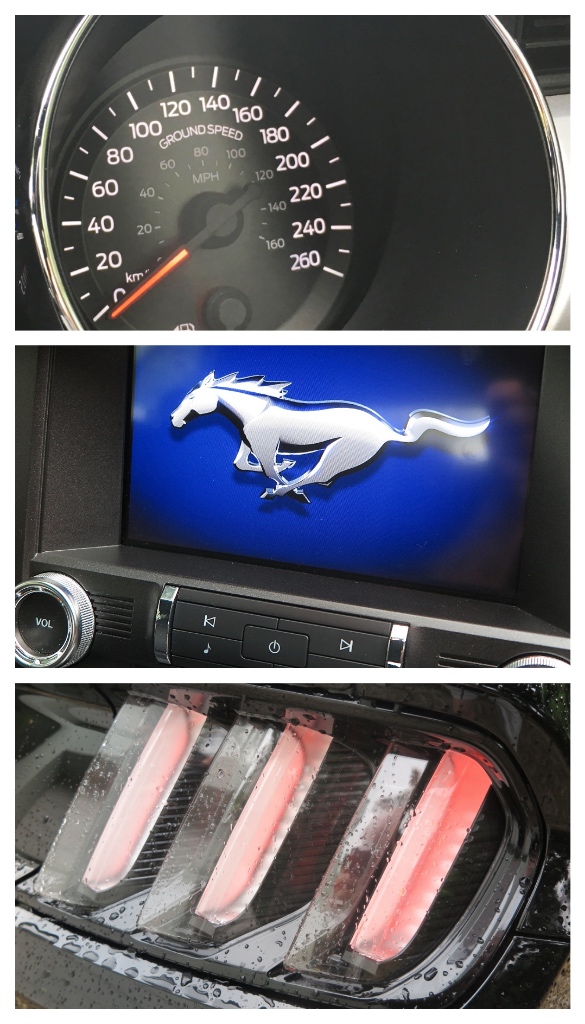 There are some neat design touches.

A brushed stainless steel feature on the dash; the absolutely jewel-like rear tail-lamp lenses, and the fact that this body shape is the closest I’ve seen to the original 1965 car.

I also love the 'Ground Speed' indicator - aka, the speedo!

In Australia the Mustang is in a HOT market segment, and it appears to be holding its own, with a 50% share of that sector.

But buyers are fickle, and I figure when something 'different' comes along – like a Walkinshaw-pimped Camaro, the Pony Car buyers will look elsewhere.


But, I certainly don’t mind opening up the throttle in the right conditions, so the V8 can bellow to its heart's content.

My good friend, David Ford, who was a senior development engineer for Ford Australia (now retired), told me that Ford Australia brought about 200 1964/65 Mustangs into the country in 1965. He thinks they were converted to RHD at Ford's old Homebush facility in NSW, which was building the Cortina, and later Ford Escorts.

I called an old contact from Homebush who told me that they were an easy conversion because of the number of parts common with the Falcon, and also because the dash was symmentrical.

Back to today's re-imagining of the famous mid 60s Pony car. I think this new Mustang delivers on all its promises. It's throaty, powerful, looks pretty sexy and because of the residual admiration for the Mustang line, it has plenty of fans Down Under. 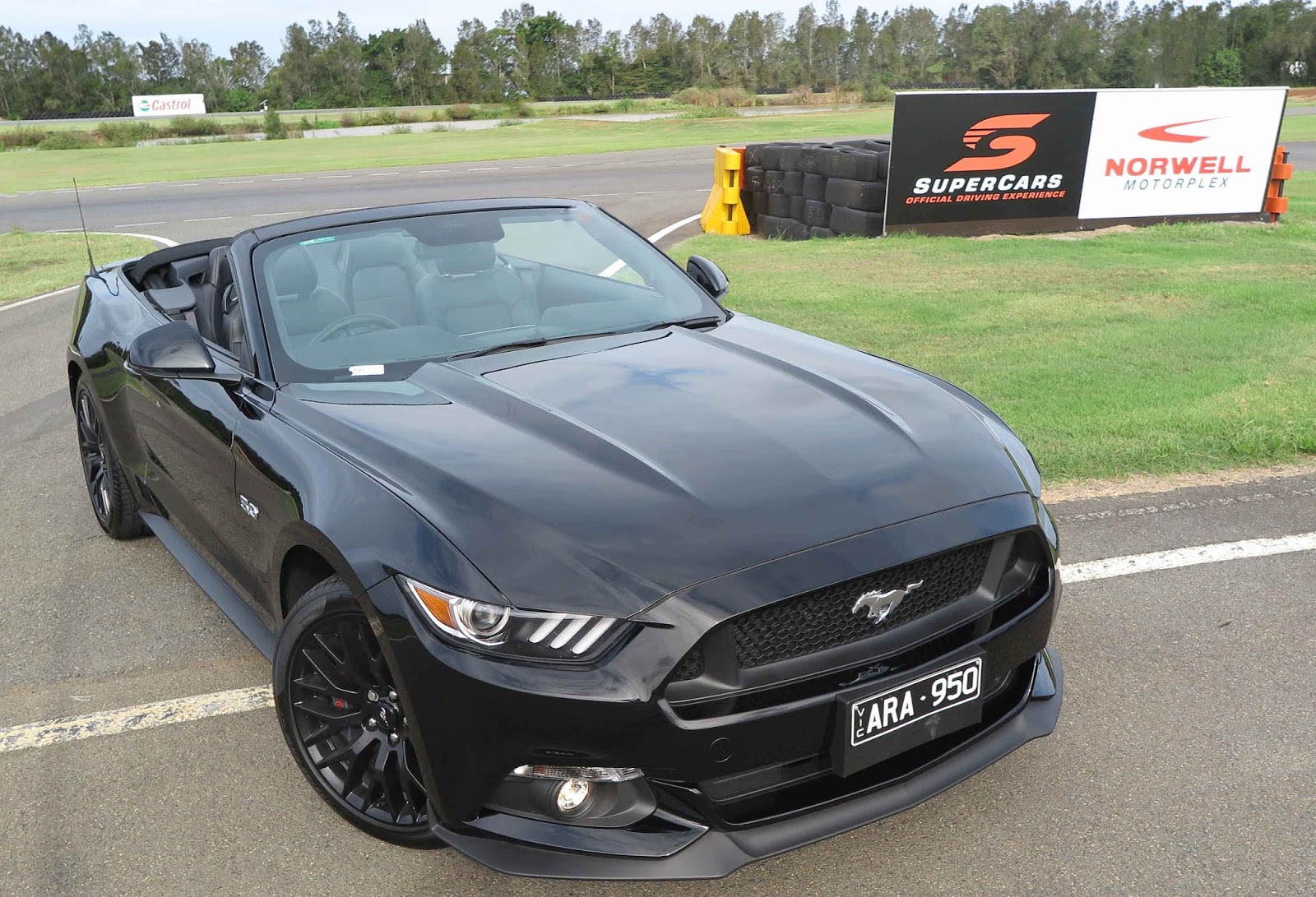 Posted by John Crawford at 6:17 PM