After all that carry on about Car Of The Year awards, here we are talking about one company which has carried off the European COTY twice, in two important categories, in the last three years, and it’s France's Peugeot. 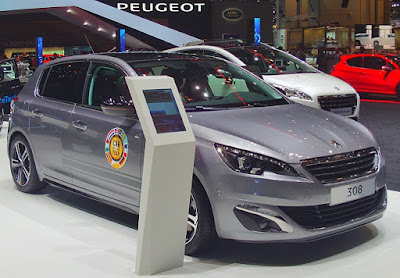 When I attended the 2014 Geneva Salon, Peugeot had just won the coveted award with its new Peugeot 308.
So why is this important?

Two reasons. First of all during the production run of ALL of the 07-series Peugeots, Groupe PSA was locked in a massive cost-saving program, and doing all the usual things like substituting plastic components which were formerly metal; using sub-standard trim materials and adhesives (which didn’t adhere to anything); and generally shaving the quality levels to barely acceptable.

This mean’t that the 107, 207, 307 and 407 models generated huge amounts of customer dissatisfaction, with owners practically arranging overnight accommodation at their dealer’s service workshop, because their vehicles spent so much time there.
I don’t have any idea what happened internally, but I suggest that the architects of Peugeot’s cost-saving program got booted out, demoted, excommunicated or sent to work at Lada. Whatever, something happened around 2012 and things turned around so quickly that the 2014 Peugeot 308 won COTY.
The second reason why this is an important win is that the market segment to which the 308 belongs is probably the hottest hatch segment in the European market – with the competitors all boasting high levels of fresh design, componentry, powertrain and quality levels. Think of cars like VW’s Golf, Ford’s Focus, the Opel Astra, Seat Leon and Renault Megane.
You’ve got to be good to best any of these competitors, and in 2014 it was a formidable bunch including, in order of points scored: BMW i3 (2nd); Tesla Model S (3rd); Citroen C4 Picasso; Mazda 3; Skoda Octavia and the Mercedes Benz S class.
Given that all the judges were aware of Peugeot’s abysmal quality and reliability levels across the previous 07 range, the decision to give the trophy to Peugeot’s 308 means it must have been a very impressive package, especially to win with a wide margin of 84 points. 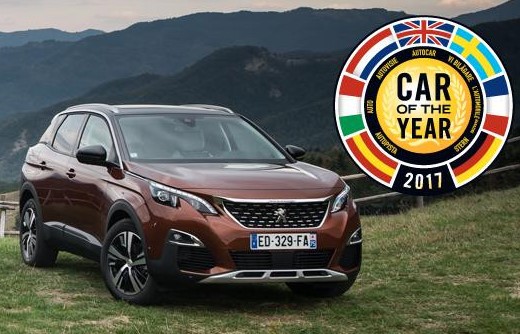 Now we fast forward to 2017, and the Lion of Belfort scored another decisive win in another vital category in today’s automotive landscape, with its brand-new Peugeot 3008.
It had a very slender majority of only 23 points, in front of the much-admired Alfa Romeo Giulia, but daylight was the big winner in front of the third-placed Mercedes-Benz E-Class. 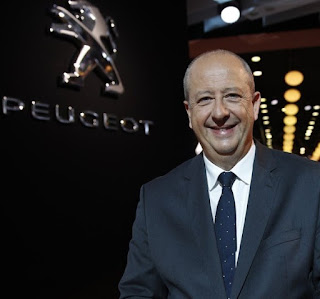 Accepting the award at the 2017 Geneva Salon, the current Peugeot boss, Jean-Philippe Imperato, subtly acknowledged Peugeot’s dalliance with cost-cutting, when he said: “We made it! The long way from Hell to Heaven, and never again will we flirt with bankruptcy, we will put our money into the product.”
Well said, that man!
Because the compact SUV segment is NOW the hottest segment around the world, Peugeot’s new entry is a striking design, beautifully proportioned, well finished and presenting a host of interesting new technological approaches to some commonplace features. 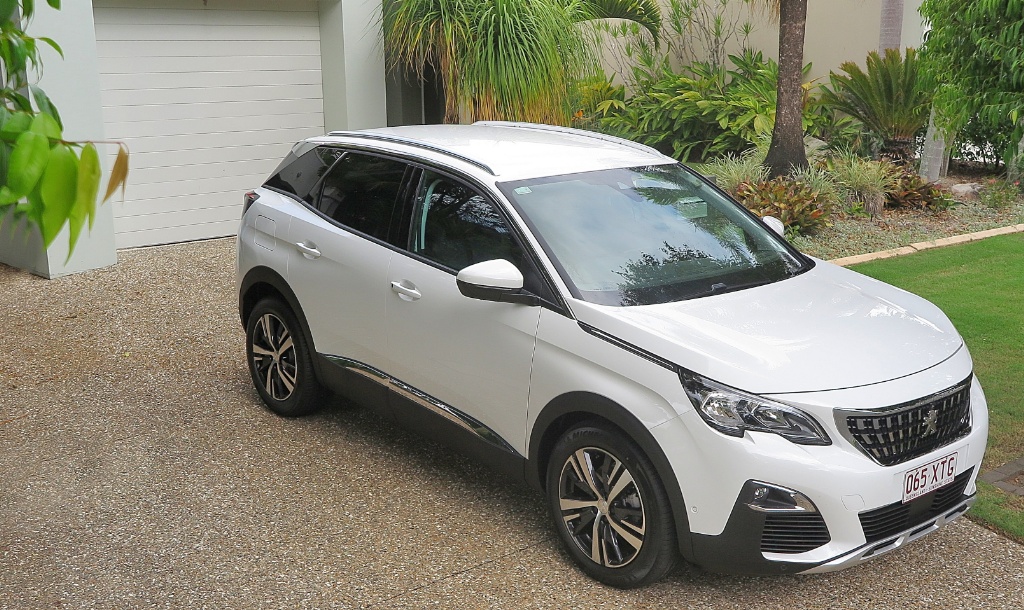 The most fascinating (and at times challenging) is the i-Cockpit, Peugeot’s attempt at minimalism, hi-tech, and a completely ‘different’ approach to delivering visual information.

I’m guessing some traditionalists will hate it, and apart from a frustrating 40 minutes attempting to ‘pair’ my iPhone 6S, I thought it was a very snappy design.
There are of course multiple choices for what you wish to display, and, left, this is just the 'opening screen' - but it is pretty smart-looking design.
Driving the 3008 is a real surprise. The second-from-the-bottom Allure version is powered by a turbocharged 1.6L four cylinder, which has surprising urge, and is a very thrifty consumer of gasoline. I managed 5.2 l/100km without resorting to ‘coasting’, or deliberately light throttle applications 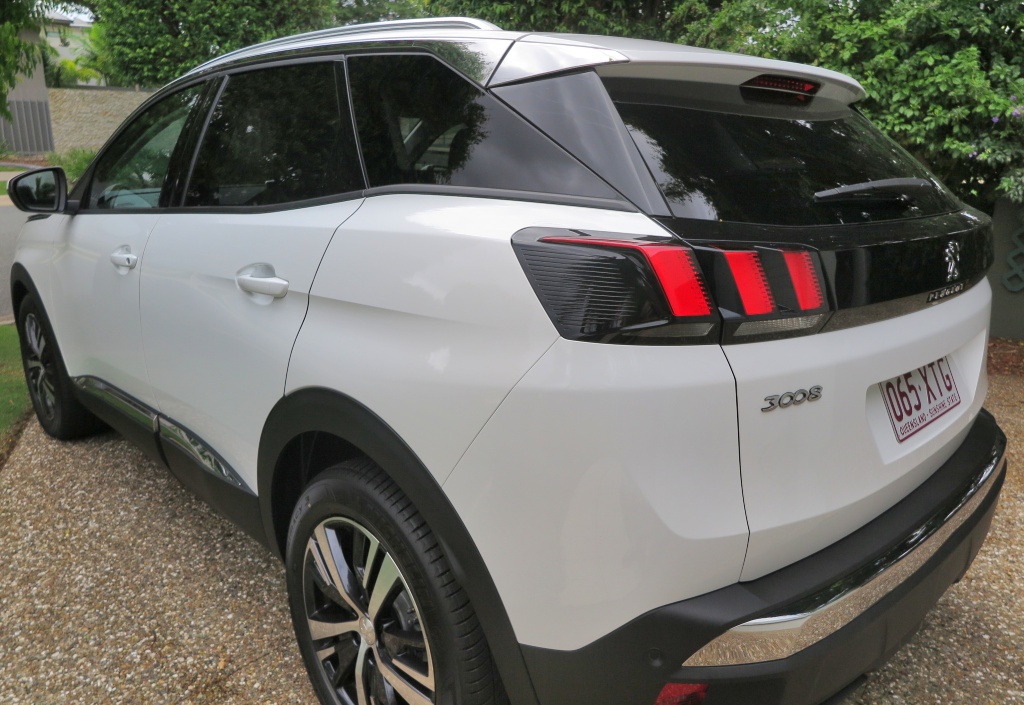 The platform of course is shared across Groupe PSA’s range, but it’s all new and provides outstanding interior space, although the layout of the cockpit gives you the impression there’s not much hip and legroom width.
Moving on to the interior design I have to hand it to the Interior Design Leader. The choice of materials; the actual design of the surfaces and shapes; and the quality feel of the overall cockpit is very modern, and very impressive. 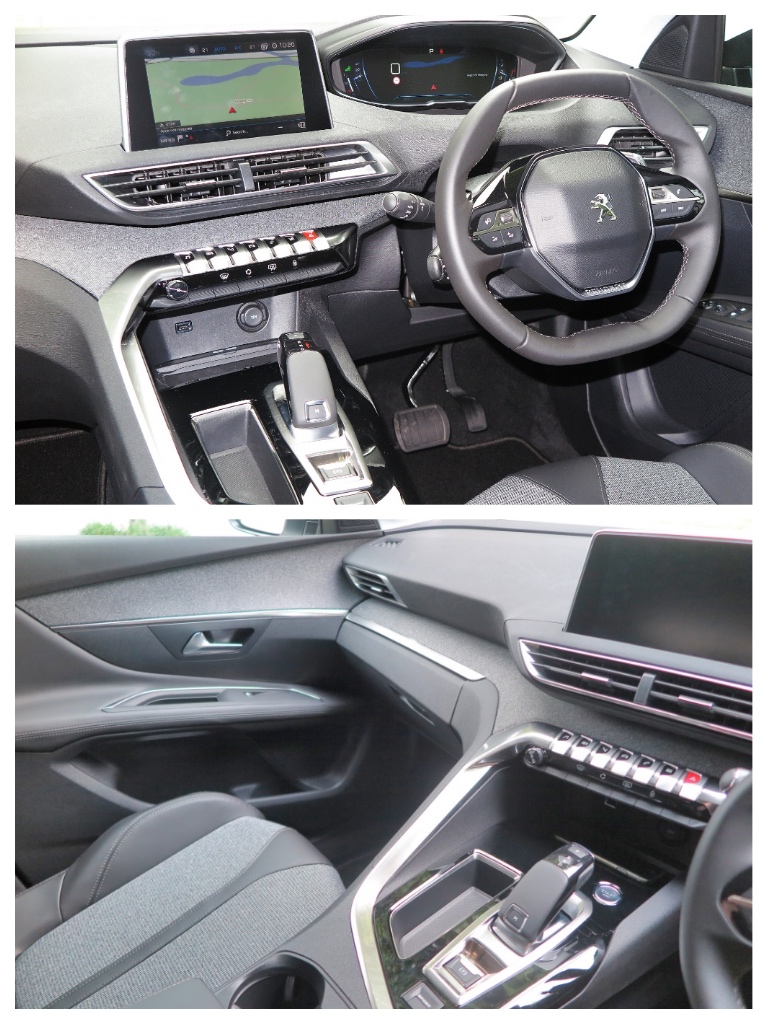 I can’t be as fulsome in my comments on the vehicle dynamics. It has a firm, not uncomfortable ride, but the spring/damper calibrations means it’s a bit sloppy going around corners, and in fast lane-change tests it lurches – which is one of the main reasons I detest SUVs with a passion. 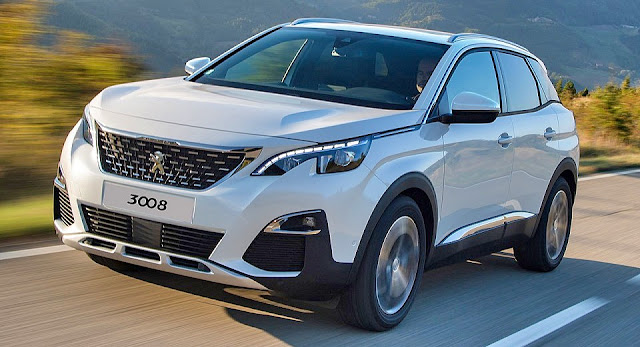 However, I have to hand it to Peugeot, the 3008 is an excellent overall package, including exterior and interior design, powertrain, and general comfort. I think it has enough ‘la differance’ to push its head above most of its competitors, and for me it’s the most contemporary compact SUV I’ve seen so far this year. Now, all the others have to do, is catch up to the new benchmark.

Posted by John Crawford at 6:13 AM