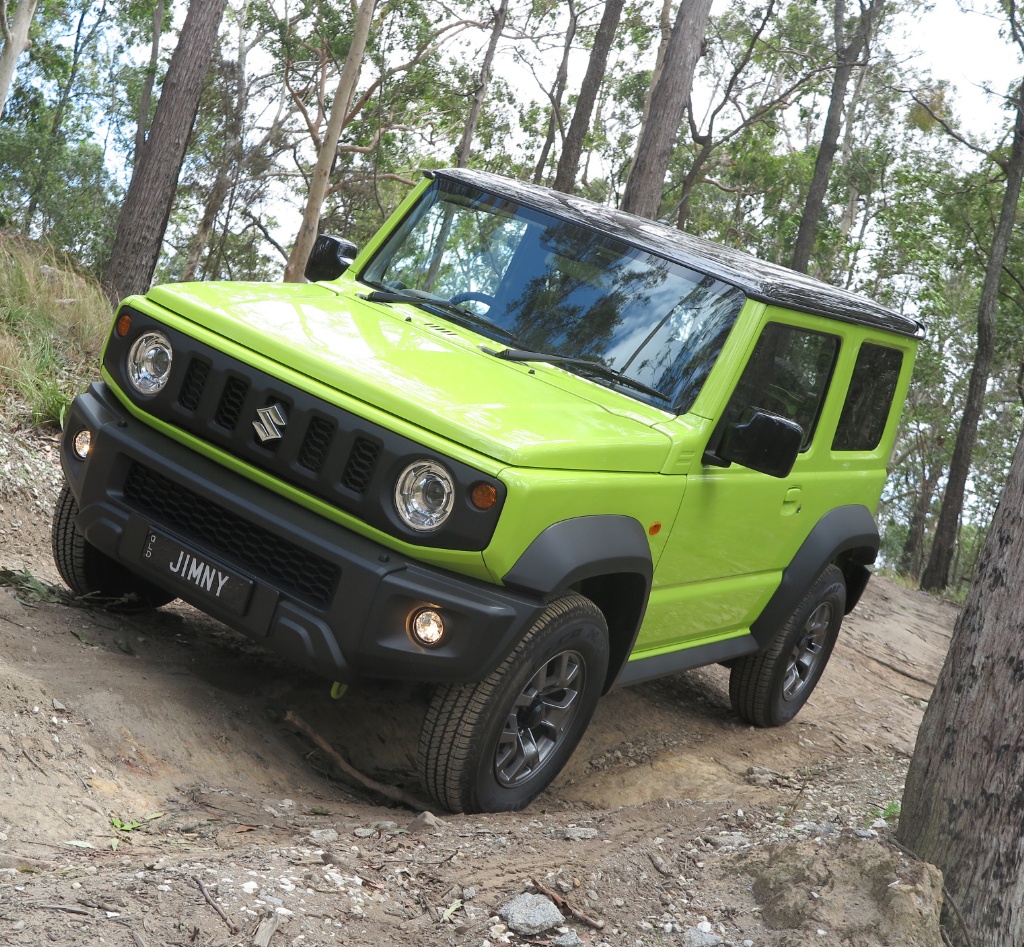 Driving down a steep hill into territory more suited to a recognised off-roader like a Land Rover, or its swish sibling, the Range Rover, I feel no apprehension, nor trepidation, as the tiny Suzuki Jimny creeps down the near vertical slope in what avid off-roaders call Low-Low ratio.

The secret, as I discovered many years ago driving Range Rovers with my good mates Russell Turnham and Geof Stubbs, is ‘don’t touch any pedals’ – at all!

These two guys know more about off-roading than most people I know, who imagine braving unknown landscapes.

Sitting in the driver’s seat, allowing the vehicle to determine the terrain, angle and speed was initially a pretty scary deal, but as Russell and Geof both said: “Trust me, you don’t have to do anything.”

The fact that the Jimny offers a Low-Low ratio, immediately brands it as a serious off-roader. And, a visit to my secret off-roading location confirms it.

In this photo (at right) you'll see the A/T lever, then immediately behind it the 4WD options. You can shift from 2WD into 4WD, and then for really difficult terrain, you push down on the lever to engage Low-Low.

Don’t laugh, it was an immediate hit. Interestingly, the originally-targetted export market was Australia, as a toe-dipping exercise for Suzuki.

Successive versions offered three cylinder, then four cylinder engines, but it was the vehicle’s spectacular ability to traverse tough terrain which earned it a reputation as a competent off-road, any-surface, 4WD.

The launch of the 2019 Jimny has been much anticipated. So much so, that of the 1100 vehicles destined for Australia in 2019, Suzuki Australia is holding 320 forward orders. 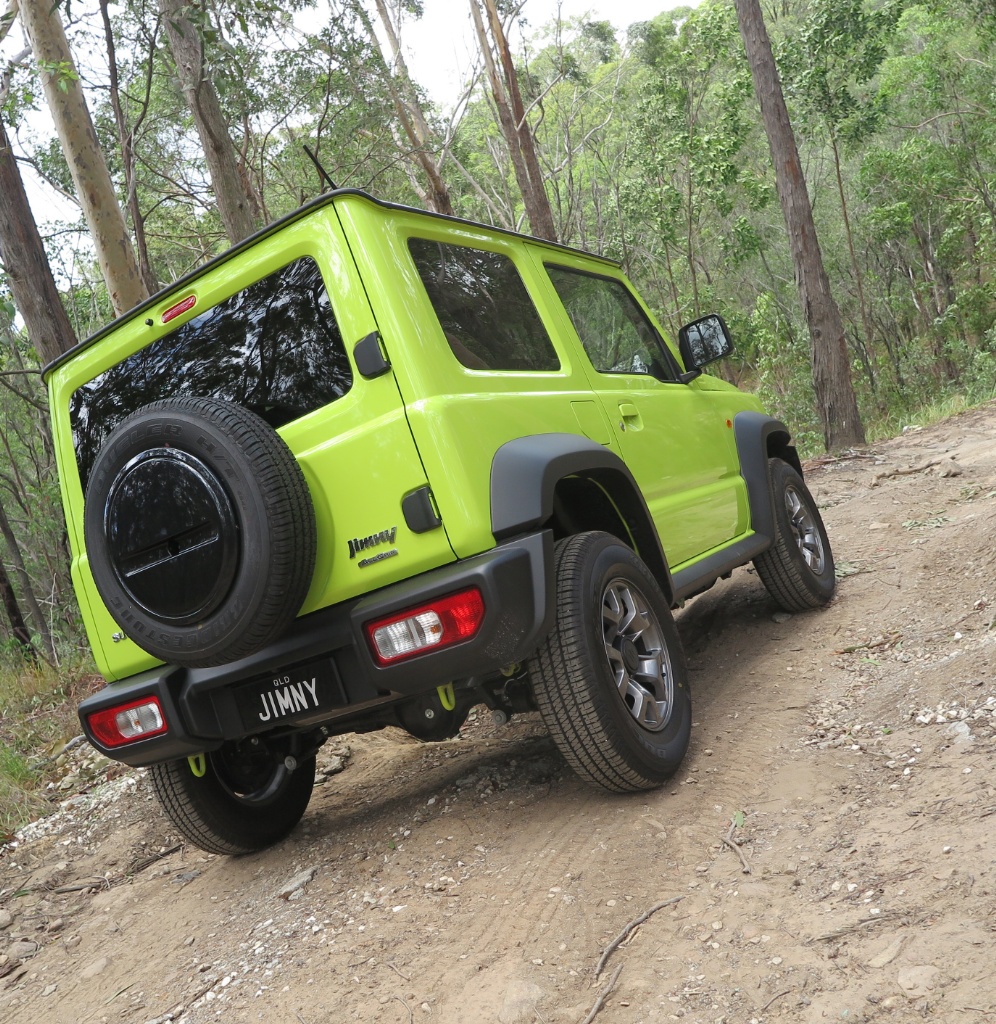 That’s because the potential buyers know that this baby off-roader delivers in every way possible to confirm its credentials.

Design-wise you may consider it a bit of a dinosaur, because it has a separate ladder chassis, with a boxy body bolted on top – however, this actually helps both rigidity and torsional stiffness. And yes, it has the drag co-efficiency of a housebrick. 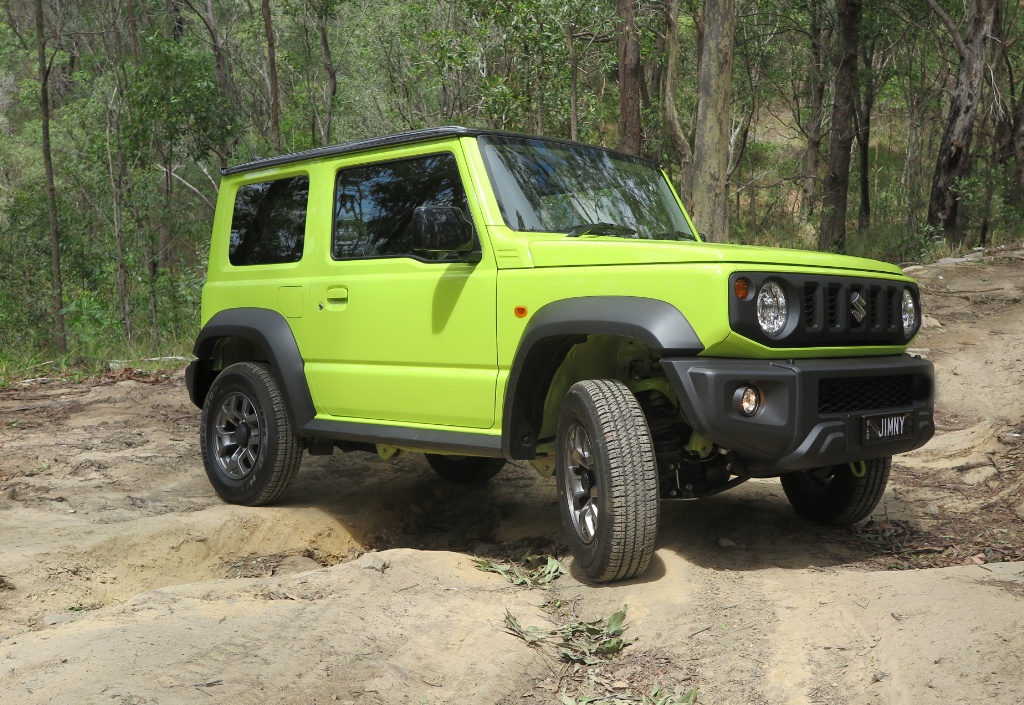 After bashing around in my bush territory for an hour or so, I was totally convinced about the Jimny’s off-road ability. It will go ANYWHERE you point it. Never mind deep holes, straddling creeks, grinding up virgin hills with no established tracks, the Jimny is unstoppable. 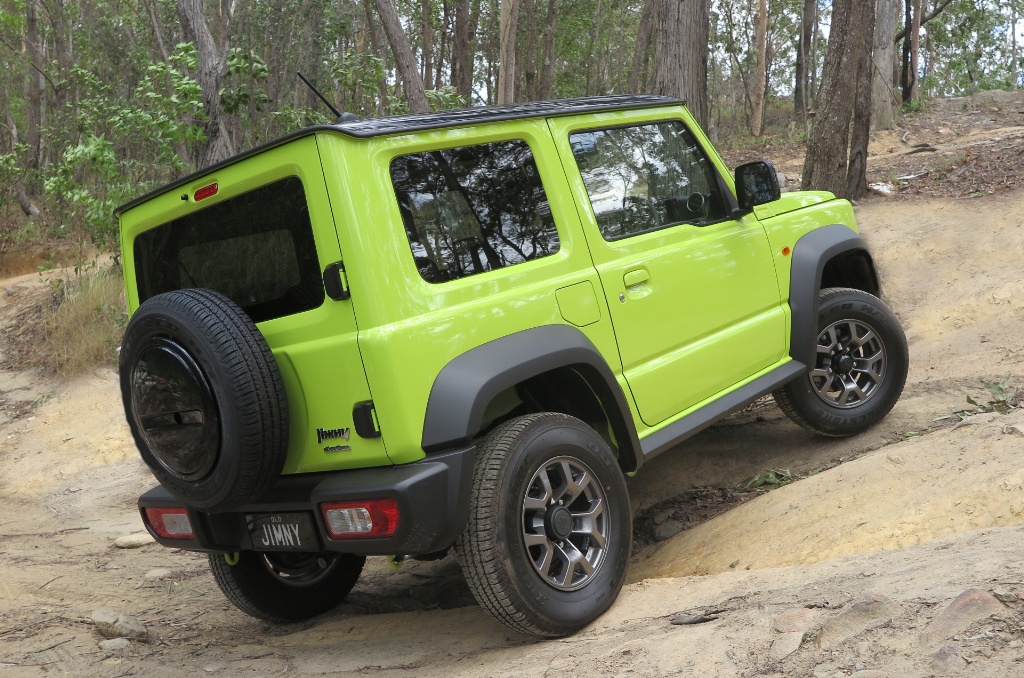 If you read DRIVING AND LIFE regularly, you will know I am a big supporter of this tiny Japanese company. Its engineering integrity, commitment to delivering performance and reliability, is unsurpassed in the auto industry. 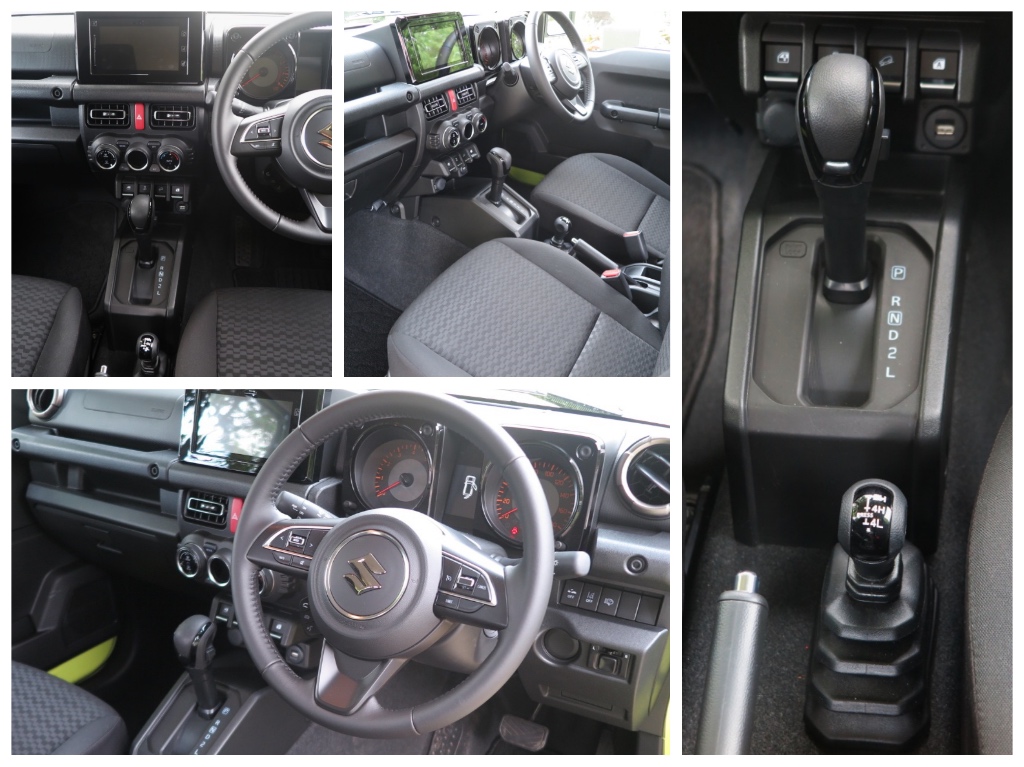 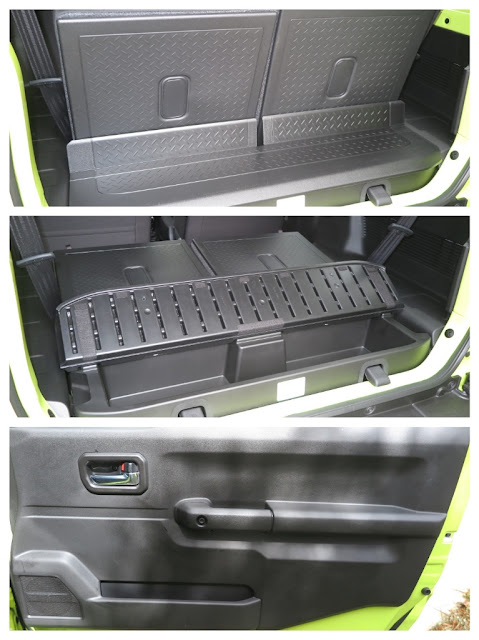 No surprise, that it’s an engineering-led company, because sometimes you get the impression that styling/design is probably the last thing they think about.

However, the 2019 Jimny is well thought-out, with a variety of useful features like a wide, but shallow hidey-hole just behind the rear seats. Fit and finish all-round is excellent.

Some automotive writers will no doubt complain about the feel and appearance of some of the composite/plastic materials, but this is a workhorse, and Suzuki has left visible bolts, and a lack of ‘covering up’ attachment points and trim limits, to underscore its workhorse intentions. But, that’s okay.

The only model available in Australia this year is the GLX version, with a four-speed automatic mated to a 1.5L engine, and costs AUD$25,990 before on-road charges.

However, I’m told there could be a trayback, and a four-door version available down the road – that’s if the volume potential in Australia is worth engineering those models for this market.

Okay, then. As a really practical, serious, and competent off-road vehicle I really liked the new Jimny.

Its short wheelbase means there’s a bit of fore’n’aft pitching on suburban roads, and its knobbly tyres make a bit of noise, but it comes with a reasonably decent sound system, plus Apple CarPlay and Android Auto, so Jimny could even end up as a ‘cool’ city car. That would be a waste of its real abilities in virtually trackless terrain. 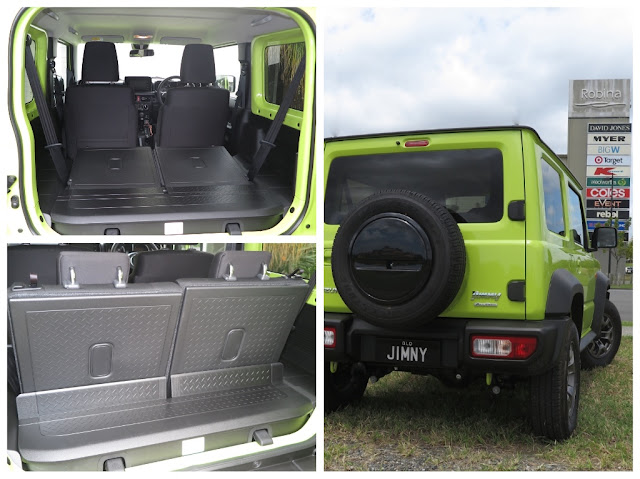 What about the Jimny as a shopping trolley; or a weekend camper? Yep, it could be both of those, but only for two people. Sure there’s four seats, but in purely practical terms you’d use this car with the rear seats folded flat, to make best use of the available 377L. If you leave the rear seats up, there’s a tiny 85L available, barely enough for two 62cm suitcases, standing vertically.

Why am I blathering on about this tiny off-roader?

Because it’s honest, delivers on its promise, and it’s rugged and reliable. It’s also good value-for-money if you REALLY want to go off-road in a completely competent vehicle. 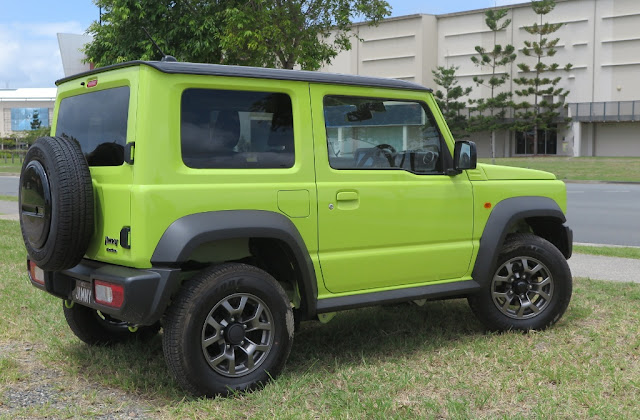 In addition there’s Suzuki’s reputation for building vehicles with an almost unlimited lifespan. I know Suzuki Swift owners with more than 250,000km on the clock, and farmers who have three or four of the original  LJ10 and LJ50 models – because they are just so competent and long-lasting.

For a tiny company, by global standards, it’s impossible to dismiss Suzuki. It’s a highly credible, high integrity car company, with outstanding engineering credentials and witness to that is the number of other car companies, which have entered joint ventures to use Suzuki’s models with their own badging. 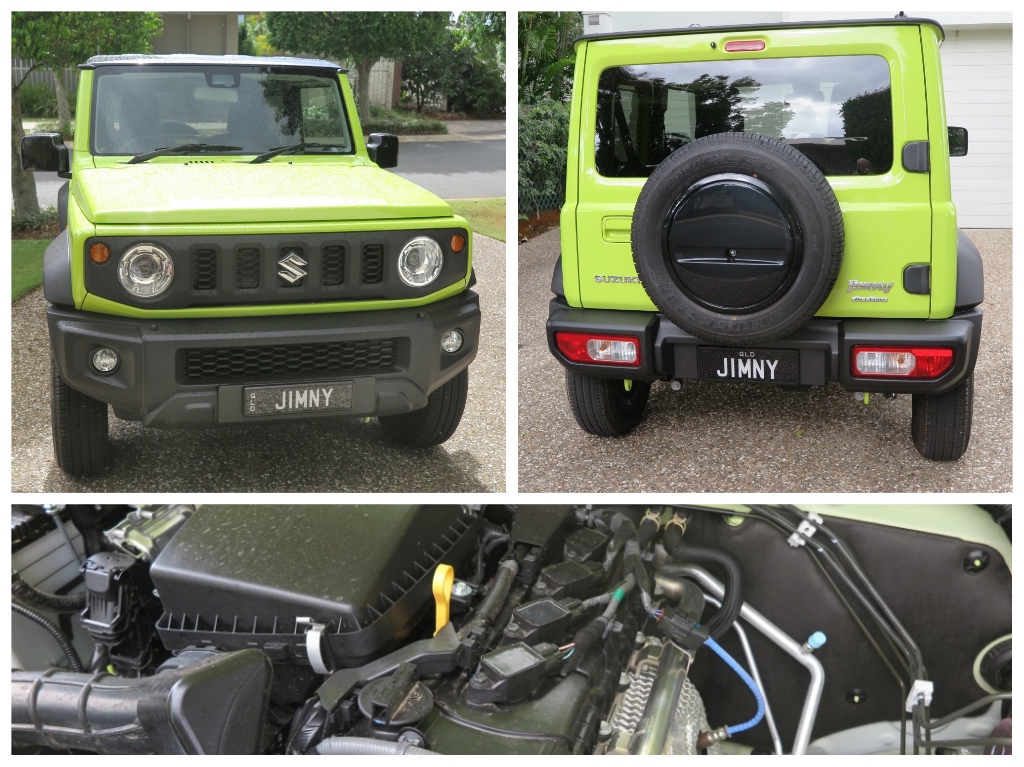 However, nothing is perfect and there are some downsides. The Bridgestone Dueller tyres are just great when it’s rutted and rough, but they are noisy on sealed roads, and they are not the most stable tyre at any speed above 100 km/h.

In fact driving at a legal 110 km/h in the rain, they tend to wander, and if you hit the brakes hard at that speed the sidewall distortion tends to throw the tiny 4x4 offline. If you retain the original tyres, then the Jimny is best suited to the bush.

Also, the 70 km drive to Brisbane unfortunately confirmed a Suzuki reality. The engineers might be great at what they do, but seat comfort is not one of the brand's strong points, and I had a sore bum by the time I relinquished the keys.

The 1.5L engine, whilst lusty, gets noisy as you open the throttle, because there's very little sound insulation, so despite Apple CarPlay you'll have difficulty hearing subtle jazz riffs either on the road, or out in the backblocks.

Posted by John Crawford at 2:19 PM