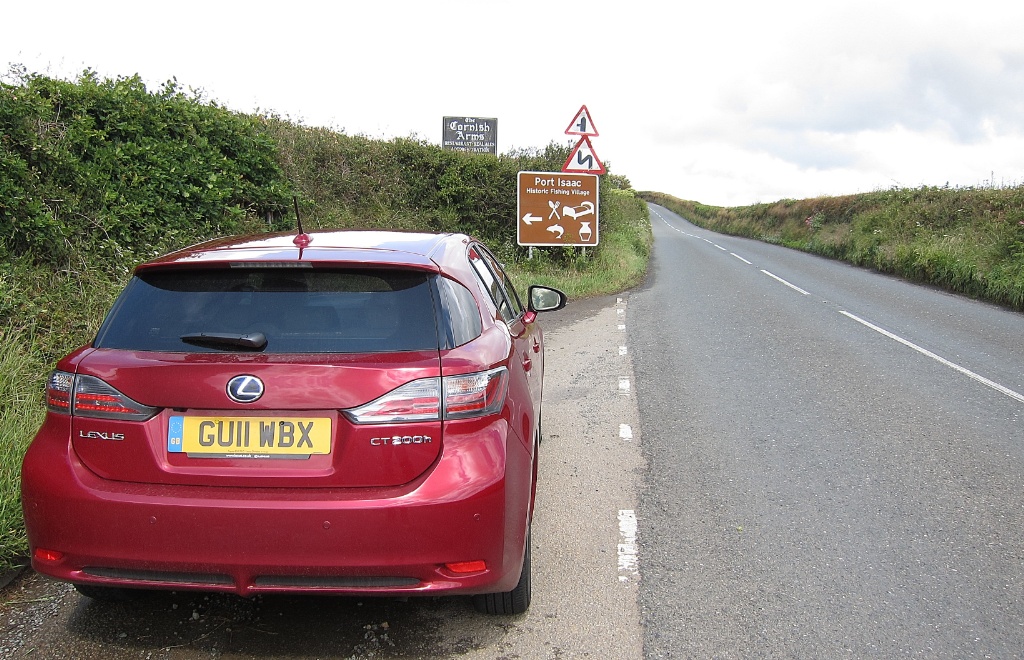 Back in 2011 I had an opportunity to road test the then new Lexus CT200h Hybrid during a trip to the UK. At the time we were keen fans of the ‘hot’ British TV comedy series ‘Doc Martin’, so we decided on a trip to the mythical Portwenn, actually the Cornish fishing village of Port Isaac. 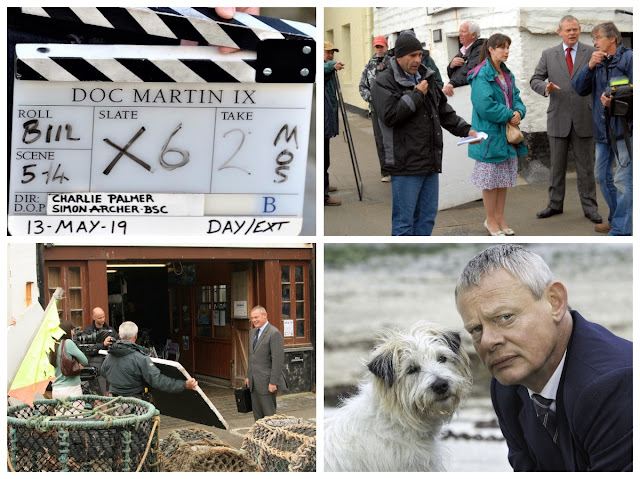 This exercise included everything I enjoyed about publishing ‘Driving & Life’ – a new car; a great drive program; idyllic locations; meeting new people; watching the filming of a TV series, and offering the chance to marry fantasy to reality.

We picked up the Lexus at Heathrow after arriving from Australia, and covered the 240 miles in about four hours. When we arrived outside the pub, locals told us that today was the filming of the final sequences in Series 4.

The film crew was set up on the beach just above the waterline, with the star, Martin Clunes, looking entirely out-of-place (as he mostly did) in his smart grey suit and tie, with the support crew and onlookers all dressed in casual gear. 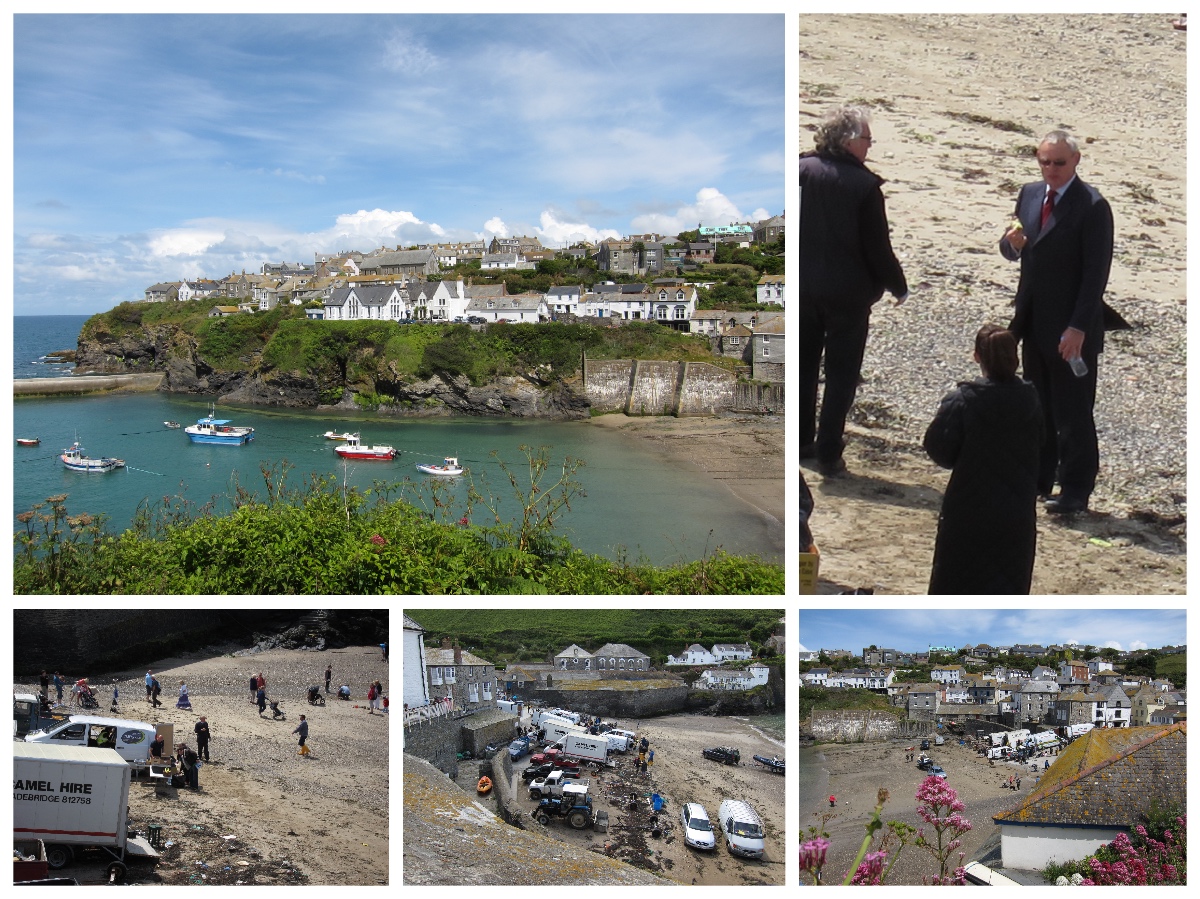 The crew had just stopped for lunch, Martin grabbing a sandwich roll and water on the beach, while the director discussed script changes before filming got back on schedule.

Having spent quite a lot of time on film and television sets over the years, it never surprises me how much ‘pfaffing around’ goes on. Rarely is anything rushed, and any ‘fluffs’ require an immediate re-shoot. Actually, being a TV series on the usual tight time and money budgets, I was very impressed how many times the Doc Martin scenes were completed in just one or two takes.

There’s no doubt Port Isaac is an ideal choice for the setting. It’s typically picturesque, with a long history dating back to the 14thcentury, when it was mainly used as an export location for coal and tin. When that enterprise shut down, it turned to fishing, which still sustains the town today. 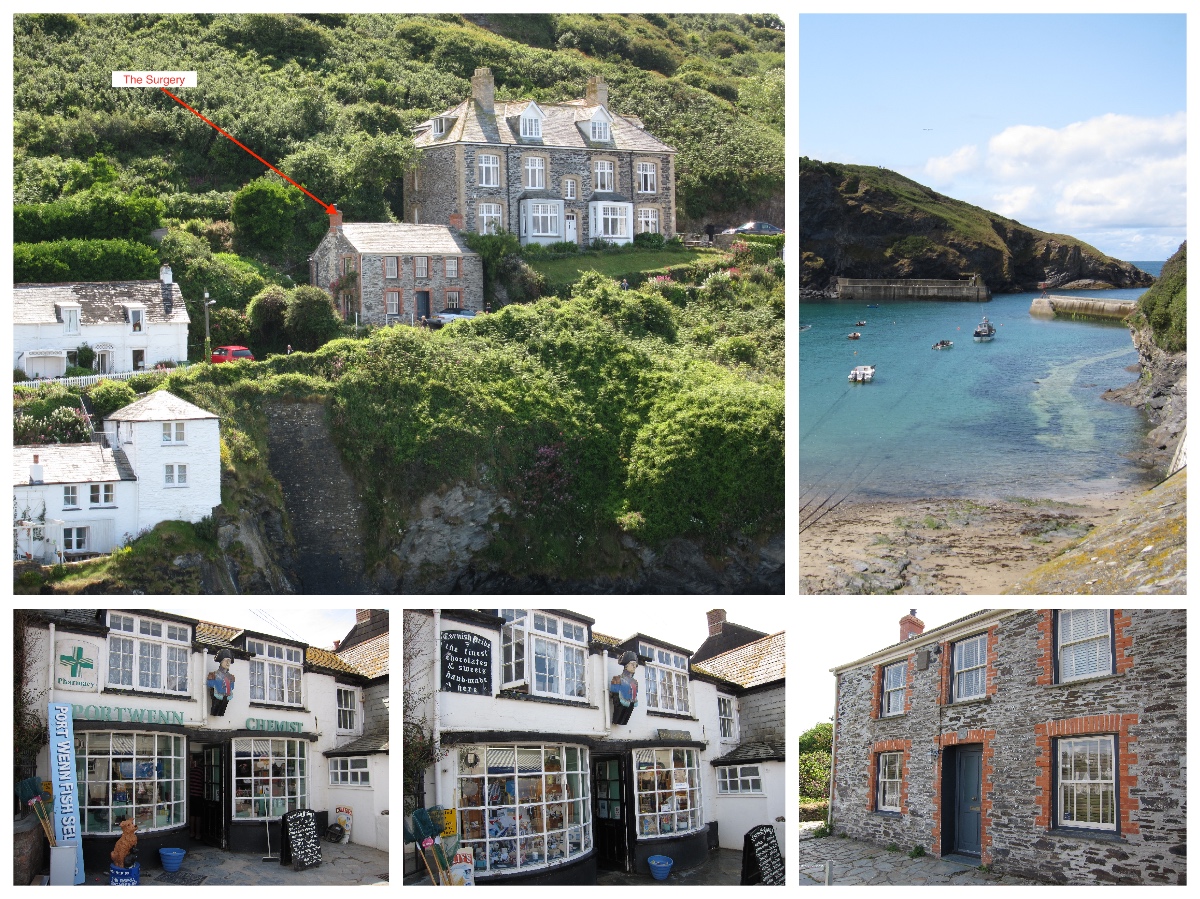 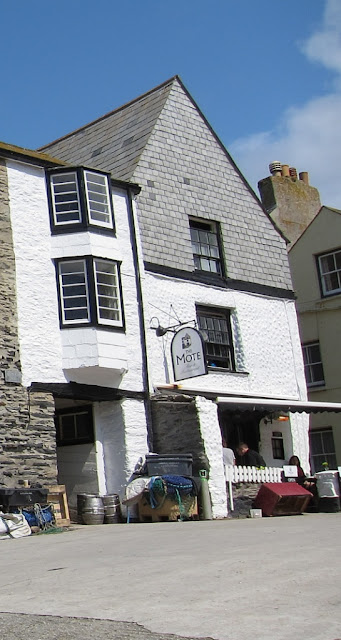 Naturally, as the TV village name is mythical, the producers have ex-appropriated a number of existing buildings to play different roles in the storylines. A private house is the scene for Doc Martin’s surgery, just up the hill from the town, and the general store has been renamed the Portwenn Chemist.

Only the The Mote restaurant managed to escape being re-cast.

The county of Cornwall is absolutely beautiful, with green rolling hills ending abruptly at towering cliffs, where the Atlantic Ocean incessantly bashes the rocks into submission. The pounding waves also open up some great spots for dedicated surfboarders at a number of beaches along the coast.

Actually, if you drive a few more miles north along the Cornish coast, you'll arrive at Tintagel, which was 'apparently' the home of King Arthur, and the court of Camelot. Needless to say the entire Arthurian legend is hotly debated, with many locals arguing that the village of Cadbury, once the site of Cadbury Castle, is the real location for Camelot.

I visited Cadbury once, and met a dairy cow behind a farm gate at the top of the hill wearing a sign around her neck, which said 'Guinevere'. Maybe I was in Camelot. 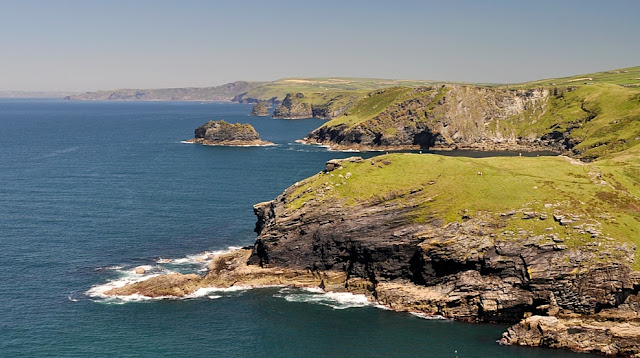 Thirty minutes drive, and 16 miles south down the A39 is the fishing village of Padstow, a much bigger town than the compact Port Isaac. Today, it’s much better known as the location for TV Chef Rick Stein’s range of restaurants. There’s the eye-wateringly-expensive ‘The Seafood Restaurant’, which fronts the western side of the busy harbor, right next to The Metropole Hotel.

A short walk away, in Middle Street, is the much more affordable Rick’s Café, but find a seat early, because it’s very compact, and very popular. Rick also runs a deli on South Quay, close to the restaurant.

If, after emptying your wallet at The Seafood Restaurant, you want to punt further south, another 55 miles will bring you to 'Land's End'. 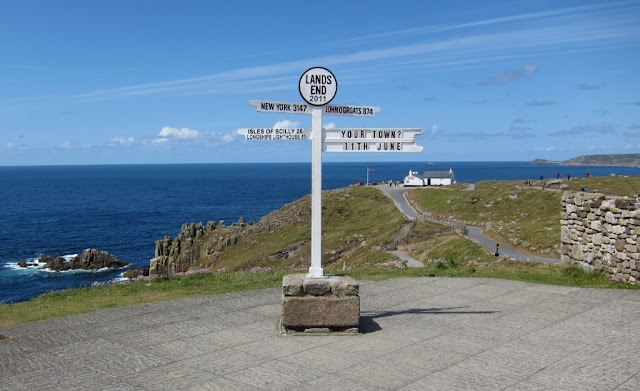 Given that it’s mostly two-lane ‘A’ roads, that will probably take close to two hours from Padstow. But, it’s worth it to say you’ve been there.

Although I’m talking about Doc Martin, perhaps a more dramatic BBC show has better links to Cornwall locations. ‘Poldark’ was filmed around St. Agnes and St. Just from 2015. The somewhat dark plot was set in the late 18thcentury and garnered millions of viewers around the world over its four series. A fifth series is currently planned for later in 2019.

Cornwall is my very favourite county in England. Lots of quaint villages, with postcard houses. 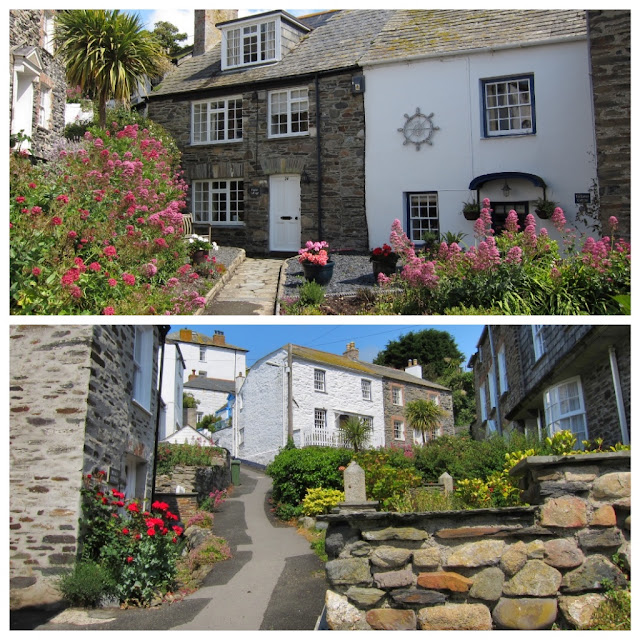 Accommodation in the Port Isaac village is mostly small BnB's, but if you look to stay on the outskirts, the Longcross Hotel (below) gets excellent reviews. 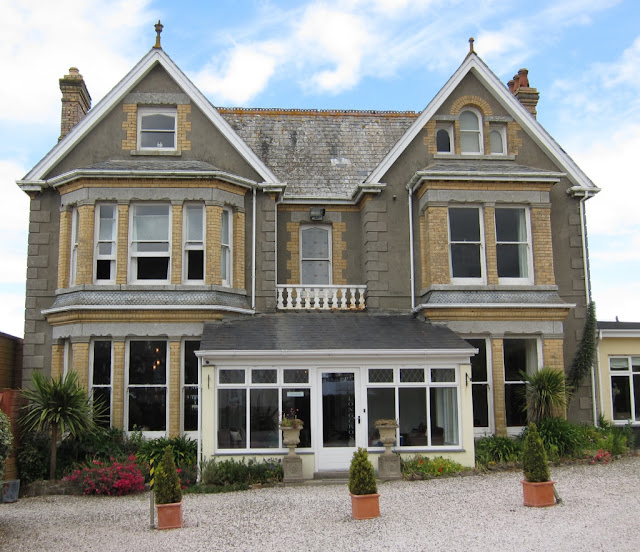 It’s one of Britain's most beautiful areas to visit, and these days there’s even a ‘foodie trail’, probably pioneered by Rick Stein’s fame.

One final note on Port Isaac’s continuing fame in celluloid, as it’s the setting for a new film called ‘Fisherman’s Friends’, based on the real life exploits of a bunch of local Port Isaac fishermen turned singing group, known as ‘The Shanty Singers’. It's due for release this year. 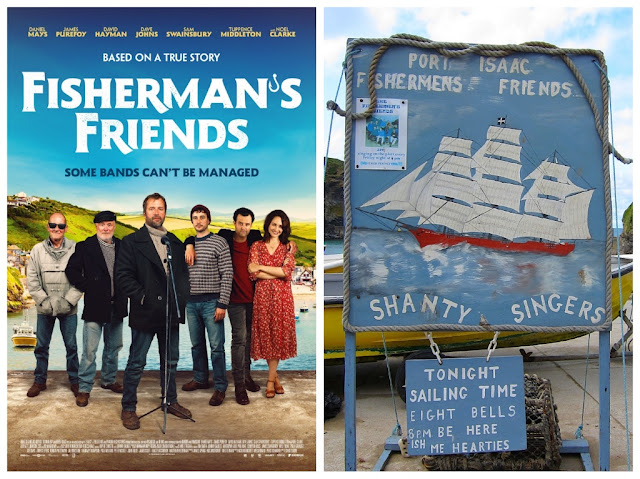 Posted by John Crawford at 6:57 PM