A PROPHECY BASED ON A BEETLE - by John Crawford 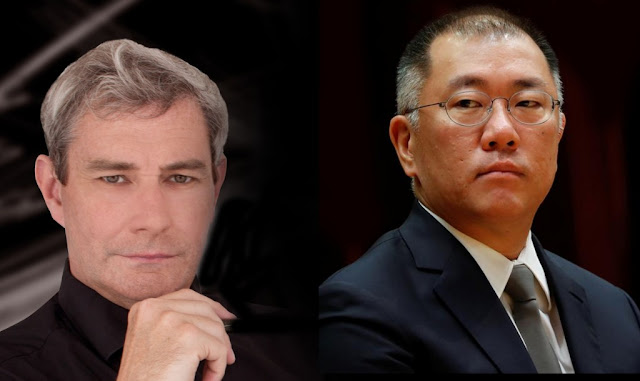 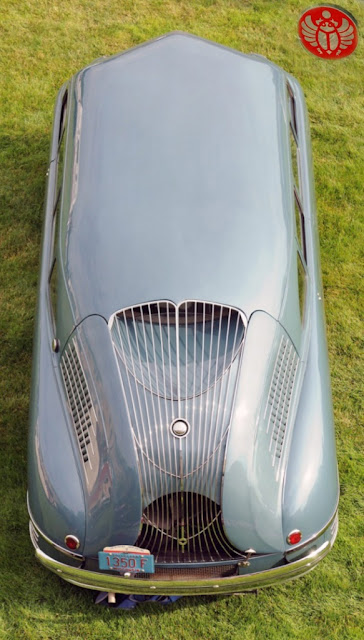 The Scarab is a beetle, native to Egypt, and was considered a symbol of immortality, resurrection and transformation, but it was also a very innovative car design in its time.

Could it inspire the shape of a car for our time?

It was this ‘thought-starter’ that was relayed back to the Hyundai design team in Namyang, South Korea, led by Sangyup Lee and Simon Loasby.

The newly-appointed Head of Design for Hyundai, British-born Simon Loasby had a vague recollection of the 1935 multi-purpose vehicle designed by William Bushnell Stout.

Whilst the mid-30s Stout may not have the most attractive appearance, at first glance, its streamlined shape was not only home to many innovations, but it was also design inspiration for other cars produced in the same period.

Time to get the sketchpad and charcoal out. 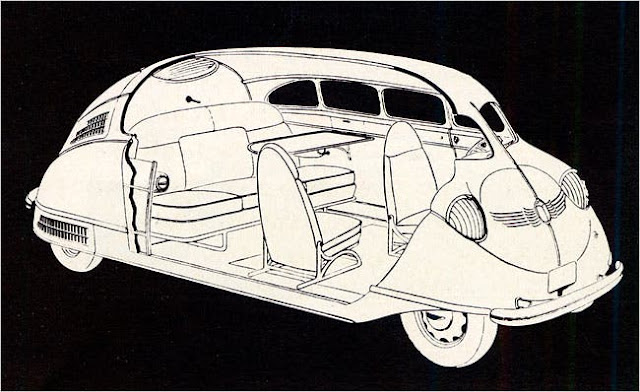 Among car designers the Scarab is known for its advanced conceptual design and innovative approach. It’s been described as the ‘first minivan’. See the Scarab story to follow.

The Hyundai design team embraced the spirit of innovation encapsulated in the Stout Scarab as it approached the design challenges of the Hyundai Prophecy concept. 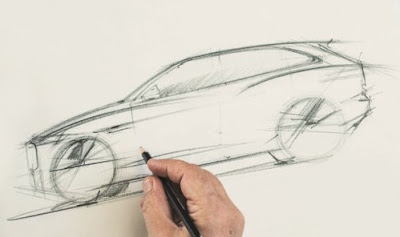 This is what fascinates me about car design, and the designers. The discussions about ideas, concepts and innovation start with people. People with a combination of  imagination, technical skills and passion for the art of car design.

The truly talented ones, with the charcoal and sketch pad, translate themes and design cues into complete cars.

The best designs inspire car enthusiasts for decades, and embed themselves in our psyche creating threads of thought-lines which inform our ongoing passion for cars.

But, the concept which Sangyup Lee and Simon Loasby brought to reality from CAD-to-car started with an absolutely ‘clean sheet’, and it was their ideas, themes and cues floating around in their imaginative brains which melded into one of the most exciting concept cars I have seen in recent years.

Not only is the Prophecy a practical concept, a distillation of advanced thinking and aerodynamics, but also a much grander concept which introduces Hyundai design themes moving forward into the next decades.

I have always referred to myself as a ‘design junkie’ – as I did back in 1998 when I first met Simon Loasby in the design studio at Rolls-Royce & Bentley Motors in Crewe, Cheshire.

We had looked over some Rolls-Royce concepts, in which I showed not the slightest interest, because I had been hired to help guide the establishment of a new image for Bentley in the USA.

As I'm sure you'll appreciate, design studios are generally off-limits to outsiders, but I seem to have a magic dust coating which tells designers, "This guy's just a design junkie."

I was much more interested in the work Simon was doing ‘on the quiet’ on what was referred to internally as ‘MSB’ or ‘Medium-Sized-Bentley’. This stuff was much more exciting, and promising, than stodgy old Rollers. 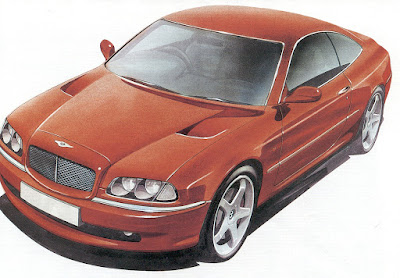 This was at the point when we knew Rolls-Royce would be owned by BMW AG, and Bentley was to become the focus of attention for the late Dr. Ferdinand Piech, Chairman of Volkswagen AG.

Dr. Piech had already decided on the future direction of the Bentley marque, and it was certainly not going to be stodgy. He had in mind an image of Power, Performance and Presence.

Not his words. I coined these three words as the catchphrase we at Bentley Motors North America would adopt to help change perceptions about Bentley in the American market. I’m delighted to boast however that I was on the same wavelength as Dr. Piech.

The young and extremely talented Simon Loasby moved on from the ‘skunk works MSB concept' to much more exciting design work at Volkswagen, first in Wolfsburg, then in China, and then, having joined the Hyundai Design Studio in China, he has been literally booted upstairs to the very prestigious position as Head of Design for Hyundai in Korea.

Rather than fill in the gaps in his extensive design-life-experience, we’ll move straight on to the Prophecy concept car – which was to have debuted at the cancelled 2020 Geneva Salon.

But, first the people who are responsible for lifting Hyundai-Kia’s design efforts to new highs.

If you look at Hyundai’s new line-up of designers there’s a definite lineage linking them all. Firstly, there’s the absolute top man at Hyundai-Kia Design, Peter Schreyer (poached from Audi); then there’s Belgian Luc Donckerwolke (poached from Bentley); followed by Sangyup Lee (also from Bentley); and finally, my good friend, Simon Loasby (poached from Volkswagen Design in China). Yes, they have all, at one time, been integral in the design of a variety of models for the Volkswagen Group.

It’s my opinion that the ideas and projects they have collaborated on at Hyundai brings an exceptionally cohesive level of thinking that could ensure we all sit up and take much more notice of Hyundai-Kia design in the years to come.

Even now, as Kia rockets up sales ladders all around the world, thanks to Schreyer-inspired design DNA, and Hyundai is conquering new ground bolstered by its impressive TCR and rally campaigns, initiated at the Nurburgring-based Hyundai facility, it's clear the Korean car company is thinking BIG.

All this plus the dynamic new designs emanating from Donckerwolke’s Genesis studio. The output from Hyundai-Kia design has been impressive to say the least – and in many recent instances, ground-breaking.

In addition to the Namyang studio in South Korea, Hyundai operates six other design centres - in Russelsheim, Germany; California, India, Japan and China, involving around 600 designers. Each studio has individual project skills, and all contribute to Hyundai’s growing share of global markets. 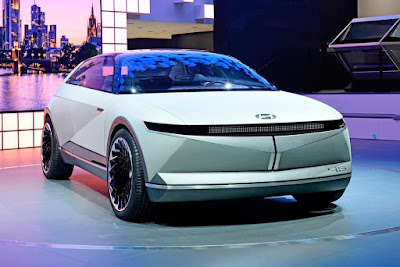 Basically, the Prophecy is a project jointly cared for by Sangyup Lee and Simon, and there are some striking new ideas encapsulated in its sleek shape.

Taking a cue from the Concept “45”(left), which debuted in Frankfurt in 2019, the design team has ‘borrowed’ the innovative pixel lighting scheme for Prophecy.

However, skin deep there’s much more intense thought being devoted to Prophecy.

Prophecy emulates one of the key elements of the 1935 Scarab, which could rightly be described now as a vintage design structure that was/is very contemporary - Scarab was probably the first ‘skateboard’ concept.

The basic appeal of this concept allows every square inch (or centimetre) of the available interior space to be liberated for occupant comfort. 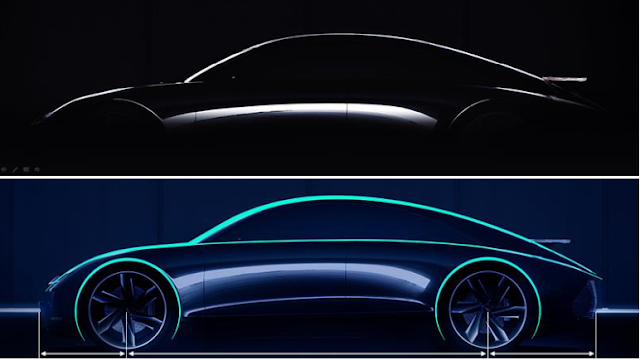 This also contributes to the immaculate side view of the Prophecy, reminiscent of the qualities of a weathered stone.

The clean and simple One Curve streamline that stretches from the front to the rear of the vehicle suggests a sense of timeless design.

The use of transparent acrylic material gives a clear view into the functional components inside. This intentional design feature is integrated in the spoiler, the headlamp, and in the CMS (Camera Monitoring System). While eliminating design garnish, the clear acrylic does authentic justice to the functional beauty of the components.

I’ll allow the press kit’s embellishment of the design aspiration, that the design team was aiming for ‘Sensuous Sportiness’ – and there’s no doubt that Prophecy is indeed ‘sporty’.

The voluptuous side section extends its maximum volume to the rear fender. More importantly, the design provides excellent aerodynamics, a feature indispensable to an electric car. 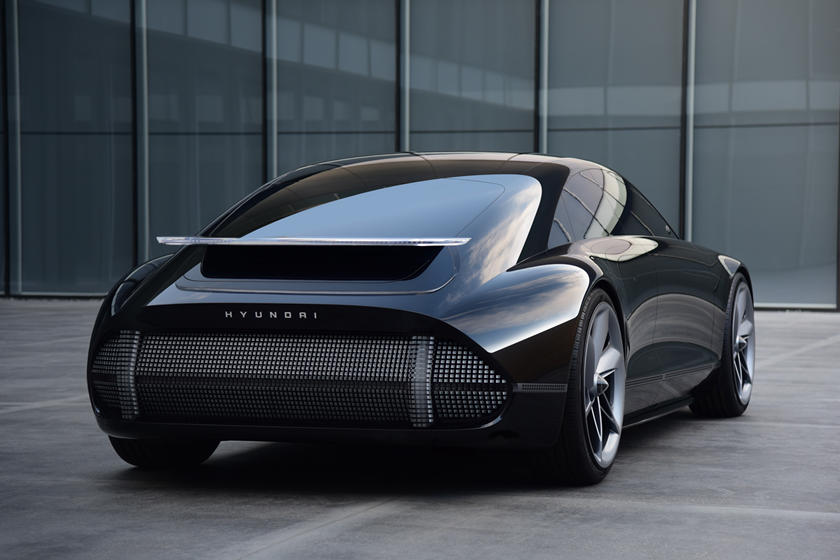 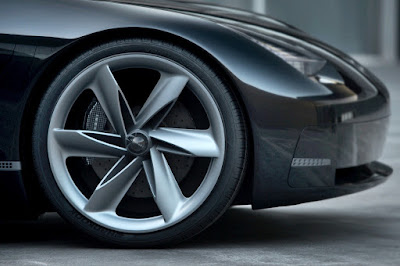 Another facet which enhances aerodynamics is the design of the wheels.

Like the propeller of an airplane, they suck in air that flows down the side of the car.

As a result, the air is compelled to adhere close to the body of the car.

Internally is where the designers have delivered a cockpit with a huge difference. There’s no steering wheel! Just right and left ‘joysticks’, and an edge to edge display.

According to the design team, the development of autonomous driving technology offers remarkable new opportunities. Instead of a steering wheel, joysticks can provide a completely new driving experience. Mind you, I can't see this idea taking off anytime soon. My mind wanders, to think of a senior driver guiding a joystick-enabled car!

By offering two joysticks that can pivot left and right - one in the centre console and another on the door trim, the driver is set-up in their most comfortable position. It actually reminds me of a computer gamer set-up. 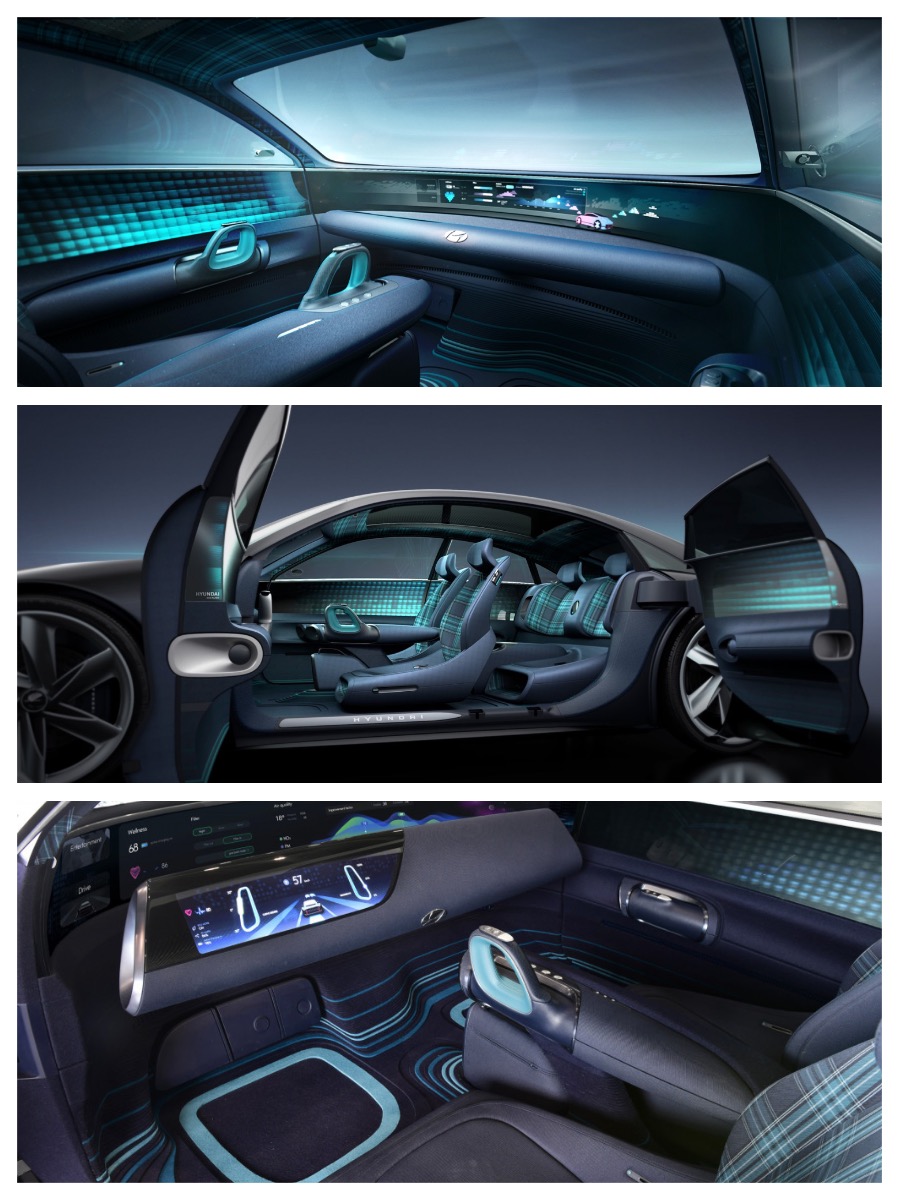 Also, the driver has the ability to use a wide variety of functions simply by making selections on the integrated buttons available on the joystick. Ultimately, according to the designers, this Intuitive Human Interface enhances passenger safety. Well, maybe.

You will have already seen similar design solutions, most certainly when Audi debuted the ‘virtual dashboard’, so it’s no surprise to see a similar approach coming from designers who were probably developers for the original Audi concept.

From a powertrain perspective, all Hyundai is saying is that the Prophecy is an EV – that’s it.

Another innovation is the air conditioning system. 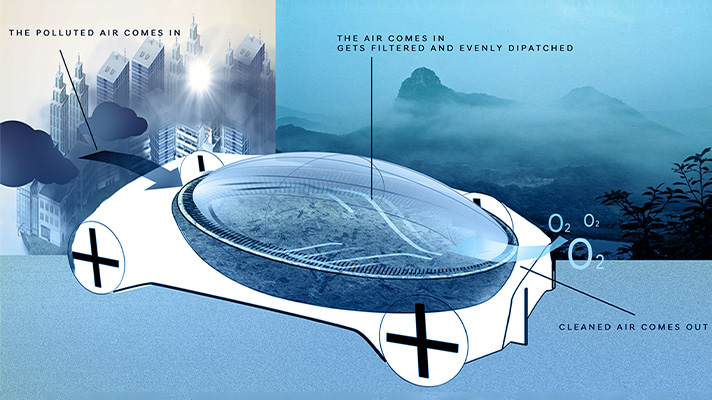 This car is all-about-design, and maximisation of interior space, whilst elevating the low-slung, bullet-shaped exterior to make its own style statement. 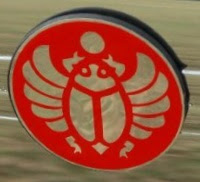 Well done Sangyup and Simon, and the rest of the team.

The project may have been inspired by a beetle, but in its twenty-first century form, it’s as modern as tomorrow.

That's what I'd call a 'perfect translation' of vintage form and function, to suit contemporary demands.