At first glance you may think, “What’s he on about? These crossovers aren’t even apples-to-apples. One is powered by that ‘dirty electricity'; and the other is powered by ‘nasty gasoline'.

Also, there’s a huge price gap between these two, and of course that makes a big difference in the purchase decision – but, hang in there.

For the sake of the comparison only, let me say that very likely, the Karoq and the Kona will be driven by Mums delivering kids to school, doing the shopping, and ferrying budding football players to training. 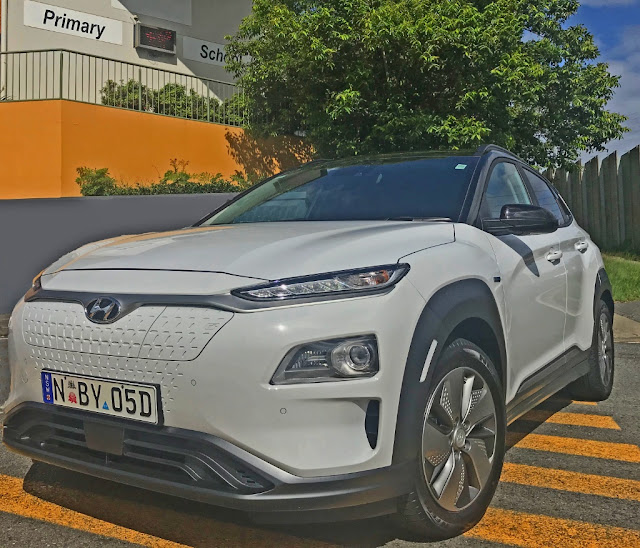 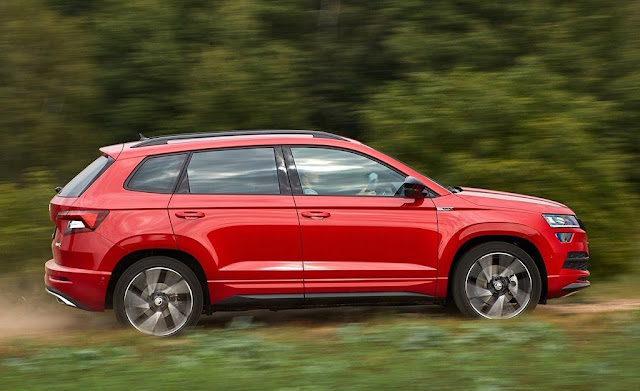 So, both vehicles will endure the same demands, but is there a big difference in how they perform these tasks?

The short answer is ‘No’ and ‘Yes’ – but this has nothing to do with the motive power, or the competence of each vehicle. The correct response is: “Social politics and the price of going Green.”

The market has already established that crossovers are the desired form of transport for families these days, just look at the sales data. Passenger cars are ‘on the nose’. As for why that’s the case, I cannot understand. Cars are comfortable, easy to manoeuvre, flexible and more economical than heavier crossovers.

But, as Trump would say; “It is what it is.” So let’s look at what may motivate you to buy a Skoda Karoq or a Hyundai Kona EV?

They are both roughly the same size, and hold as many human forms as each other, plus all the footy and picnic gear in the back, under the tailgate. They perform pretty equally, although how you treat the accelerator pedal results in big differences in operating conditions.

If you’re a leadfoot, then the Karoq driver is simply looking for a gas station to pour hard-earned dollars down the filler tube.

If you’re a Kona EV driver, then your major concern is that the rapidly shrinking range has you on the lookout for a public charging station – and right now, there’s fewer of those than would make you feel comfortable. 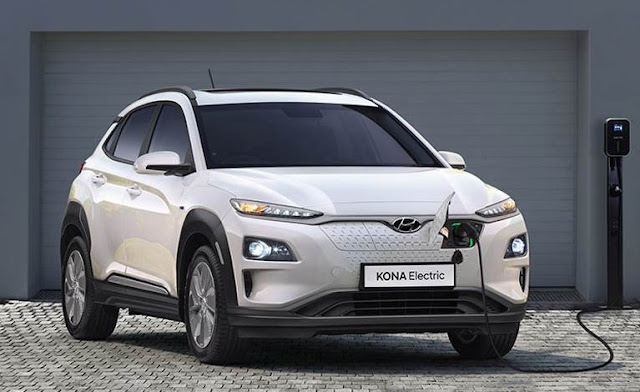 Yes, despite promises from EV producers that driving distances are constantly being increased, ‘range anxiety’ is still a big issue for EV owners.

First, to cost. The Karoq starts around AUD$34,000, whereas the Kona starts just over AUD$60,000. Yes, that’s about double the price for ‘going green’. Trouble is, in Australia, by choosing an EV, you are a long way from being someone who ‘really’ cares about the environment.

That’s because Australia produces ALL of its electricity by burning coal in its power stations. So, does it make sense to buy a pure BEV (Battery Electric Vehicle) in Australia, because of environmental concerns? The short answer is ‘No’.

There’s also another consideration in favour of gasoline-powered cars. Carmakers are making huge strides in making the ICEs (internal combustion engines) of today much cleaner, and more economical. This fact is irrefutable evidence that ‘environmentally’ you are much more responsible choosing a current gasoline-powered car. The ICE is a long way away from going the way of the Dodo bird.

So, having thrashed out this particular argument, how do these two perform those daily tasks I listed earlier? On that question, you could spend a long time trying to split hairs.

The Karoq is a delight to drive. Yes, it’s a VW with another name, but it’s a truly enjoyable vehicle ‘on the road’. It steers easily, performs acceptably, and has all the creature comforts your chequebook can afford. 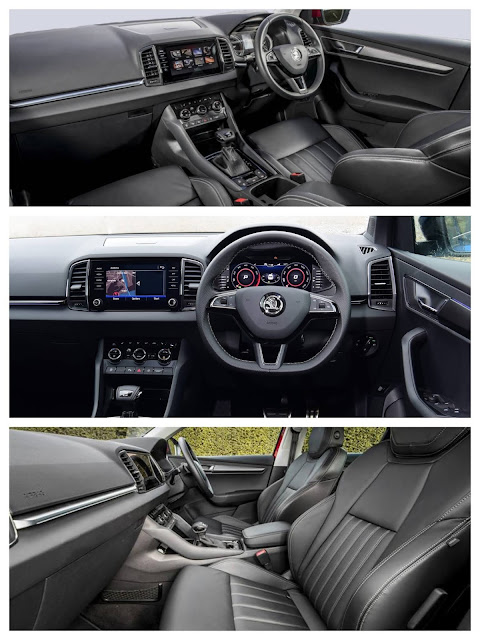 The Kona does likewise. It’s certainly one of the most enjoyable EVs I’ve driven over the past couple of years. Driving it, is simplicity itself. There’s four transmission buttons in a tight little quadrant, and there’s one engineering touch in the cockpit I really like.
I needed a little extra 'juice' and thankfully Stockland Mall on the Gold Coast has a public charging station. The instrumentation in the KONA is dead simple, and the only two icons you need to pay attention to are the 'Regen' setting; and of course the 'distance to empty'!

The steering wheel ‘paddles’ are not for changing gear – instead they increase or decrease the ‘regeneration’ of battery power – depending on the driving conditions you are dealing with.

If it's a freeway, then set the ‘Regen’ switch to 1 or 0; whereas, if you’re in the ‘burbs, dealing with undulations, or stop-start driving, set the ‘Regen’ control to 2 or 3. It’s a useful challenge to master the effects of regeneration when it’s on 2 or 3.

You can train yourself just to drive on the accelerator in the ‘burbs, and by judging when, and in what distance you will slow down, and stop. You can generate maximum ‘regen’, and slow to a halt without actually using the brakes!

The Hyundai Kona is a pretty clever EV, and I like it for that alone. It’s well-finished, comfortable and capacious – and most of all, really simple to operate.

Now, the Karoq is my sort of vehicle (except that it’s an SUV, which I detest). It drives beautifully. It’s quiet, rides well, steers well and is very smartly-finished, with quality materials and excellent equipment levels. 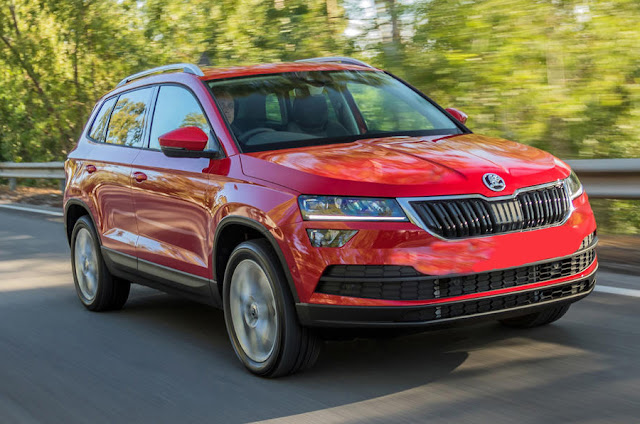 And of course, if you choose the 4x4 version, you can take it off-road - where, I'm pleased to say, it's very competent. Maybe not Range Rover-competent, but pretty useful anyways. 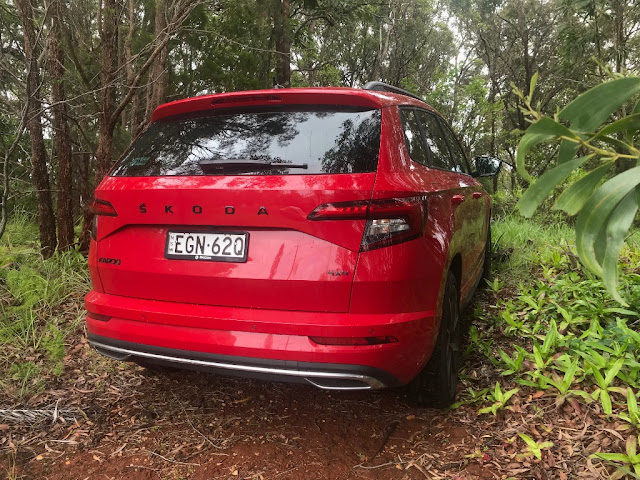 Let’s face it, I’m pretty much okay with anything that has Apple CarPlay and a Cruise Control.

So, it’s down to you. Petrol or Coal Power. It’s all up to your own convictions when it comes to polluting the environment, whilst you use your car for – whatever!

Posted by John Crawford at 3:44 PM