Back in June 2014 I posted a story which I believed represented huge potential for the production of solid-state batteries, using a new development of a substance called Graphene.

From my early research I immediately recognised the benefits from using Graphene in a host of devices, initially in screens for mobile phones, computers and TVs.

However, a huge step forward has occurred in the USA and has been reported this week by GoAutoNews. Here is the story:

Nevada-based Nanotech Energy has taken out the prized Innovation Award at the 2022 Consumer Electronics Show (CES) for its innovative graphene-based non-flammable battery technology.

The company’s Graphene-Organolyte batteries can be tailored to fit any shape or size and can be used to power Battery Electric Vehicles (BEVs), consumer electronics, and a variety of other electrified devices. 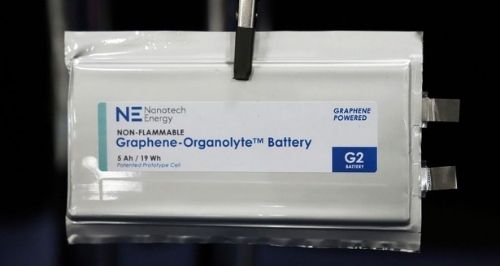 Claimed to potentially revolutionize electric vehicles, batteries made using this technology are said to be more stable in extreme temperatures or when punctured or deformed.

Nanotech Energy claims its graphene battery can retain more than 80% of its rated capacity of 1400 charging cycles and can be recharged 18 times faster than any other battery currently on the market.

If, and there’s always an ‘if’, this technology can be scaled up cost-effectively it could be some sort of silver bullet for the advancement in the takeup of BEVs.

Posted by John Crawford at 9:35 AM