SO MUCH MORE SIXTEEN by John Crawford 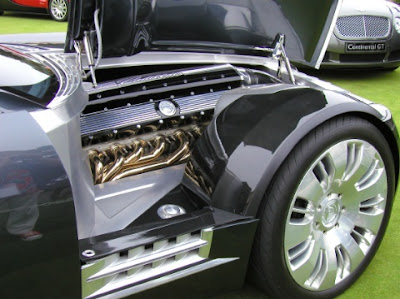 The kernel of the Cadillac Sixteen story was created by me, with a chance photo I snapped on the Concept Lawn at the Pebble Beach Concours d’Elegance in August 2003 (right).

The car was being shown for the first time in California and had attracted huge interest. As I walked past, an attendant opened one side of the centre-hinged hood, so I snapped off just one shot of the huge and very impressive engine. 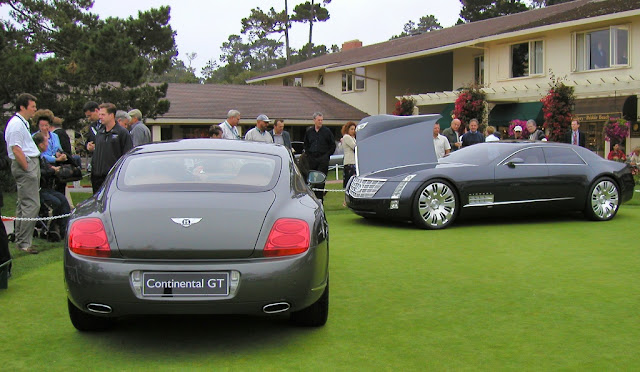 It blew me away, but secretly I thought “I’ll bet it’s a dummy engine, no-one would really build a ‘running’ sixteen-cylinder engine – especially GM.”

How wrong I was. Whilst searching for inspiration for a fresh Blog post I came across that 2003 photo in a ‘Miscellaneous’ folder, and beginning right there the Cadillac Sixteen car and engine has turned into something of a saga for me, and this is my paen to a ridiculous, audacious, mind-blowing and sophisticated example of American automotive engineering and design at its finest.

However, it’s much more of a story about people, rather than cold metal parts being assembled by skilled artisans. 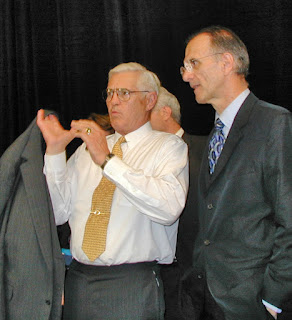 You won’t be surprised to know that GM’s Chairman at the time, Bob Lutz, was the driving force behind the Sixteen project, aided and abetted by Design VP Wayne Cherry.
The plan was to convince GM that this grand old brand should be on a pedestal, wearing the crown as GM’s ultimate showcase for high-value design and engineering. 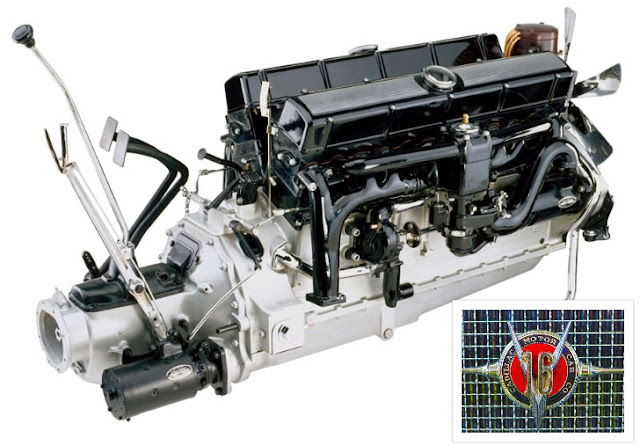 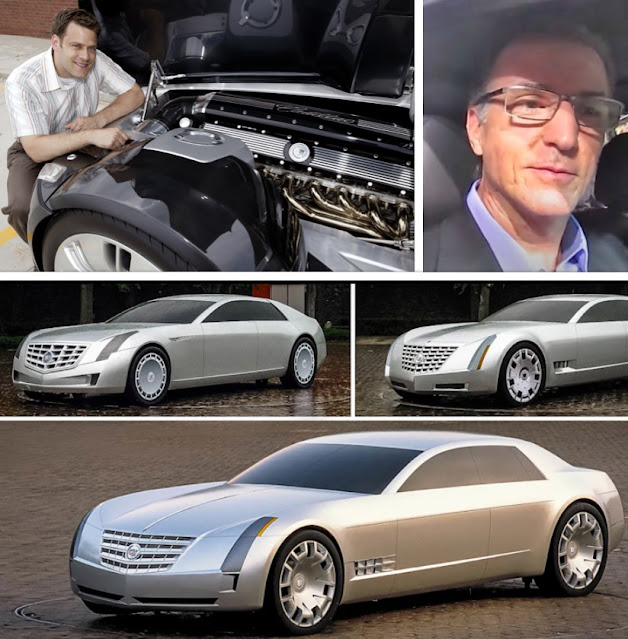 From a design perspective the Sixteen appeared right in the middle of Cadillac’s pursuit of the ‘Art & Science’ theme which debuted in 1999.

Not only was the focus a car ‘big enough’ to properly encapsulate the huge engine, but also to capture a set of proportions which may have the effect of slightly ‘minimising’ the impact of such a huge car.

Both designers scored some major brownie points with their tasks. Brian Smith produced a rakish, low slung and imposing shape; whilst Eric Clough produced not only a tasteful and beautifully-finished interior, with a sophisticated and understated blend of materials, but also a completely unique ‘dial set’ for the instrument panel, including a one-off Bulgari clock. 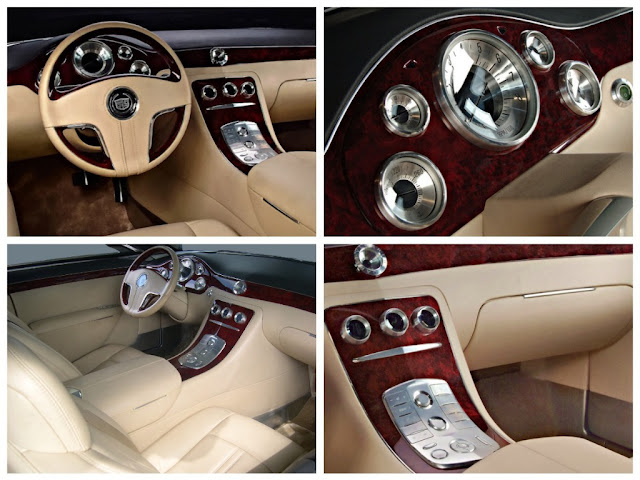 But it’s under the hood where the audacity of the Sixteen program really impresses. Make no mistake, 13.6L capacity; 16 cylinders; a 38” inch long crankshaft; 1000hp, plus a massive torque figure of 1000 lb ft is a very bold statement. 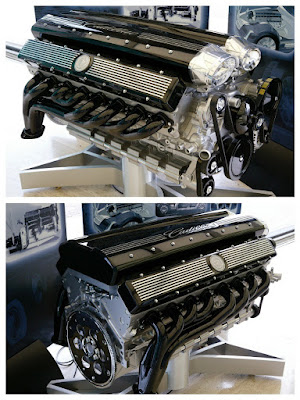 But get this. The engine program resulted in TWO engines being produced – just in case something catastrophic occurred when testing the original prototype.

Let’s start with the basics. Yes, the underlying architecture starts with GM’s small block V8 (below), which is a cam-in-block design. This provides the basic dimensions of the behemoth, plus all the ancilliaries.

Of course, making twice the engine from one is not a new idea. Recently, Aston Martin created its original V12, by marrying two Ford Duratec V6s together; Bentley made its W12 by binding together two narrow angle 15 degree VW V6s; The VW Passat W8 was two VR4s, and the famous Bugatti W16 was two narrow angle V8s (based on the VR6) one-behind-the-other. 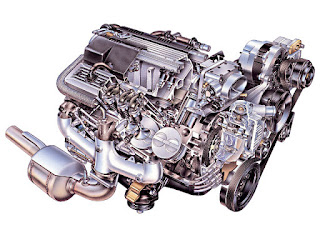 There was the challenge of not just fitting it into the engine bay, but Brian Smith also had to design jewellery to adorn the massive powerplant, like tappet covers, accommodating sleek exhaust manifolding, and integrating the ‘working’ parts under the centre-hinged hood panels.

Okay, so under the hood we need a giant, cast crankcase, a huge crankshaft and camshaft, two huge cylinder heads plus scavenge pumps and a special, cast dry sump. 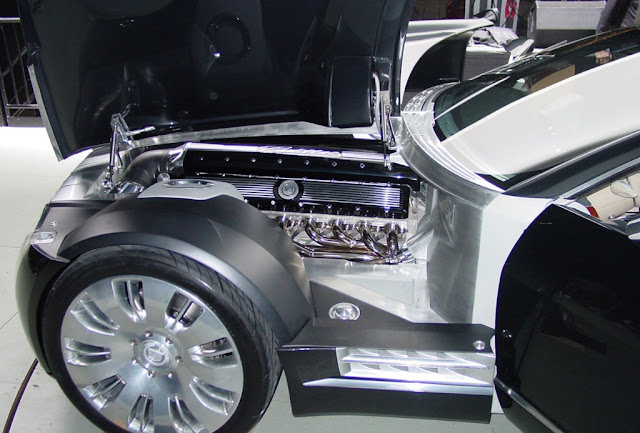 But, what I find really exciting, interesting and praiseworthy is that GM turned to local suppliers in Michigan for the bulk of the work, calling in engine specialists Katech, Dearborn Crankshaft and LSM Systems Engineering. Both the crank and camshaft were machined from billet steel, and the cylinder heads were machined in-house at Katech. Line boring the Mains was undertaken by Schwartz Machine.European specialists were called on for a couple of big jobs. The block was cast by Becker CCC; the eight-stage dry sump cast by ACTech GmBH, and torsional stiffness studies and calculations for the crank were done by Ricardo in the UK.

However, the program was led by GM veteran powertrain engineer, Tom Stephens, heading a team of specialists from GM-HPVO.

Once all the parts were finished they were all returned to Katech for the final assembly and first start-up. It was an extraordinary project of much complexity, but GM wanted to show the Cadillac Sixteen at the 2003 North American International Motor Show in Detroit in early January, so the entire program from start to finish had to be completed in an ambitious seven months! Remember this also included making a complete, second, running engine!

Okay, so the Sixteen never became the ‘halo’ car it was intended to be, and whilst many lessons were learned, from an engineering and design standpoint, there was nothing specific that carried over to future Cadillac projects, but what this project did do, was to highlight the resources, and competencies still alive and kicking within GM.

What was the Cadillac Sixteen, powered by the XV16? Was it a crazy dream car; a vanity project; a folly, or a fruitless way to expend millions of GM dollars on an exotic fantasy machine?

I don’t think any of that matters. The fact is the project was conceived, created and carried out by a GM team that was dedicated to showing off their talents – and what ‘could be’ for Cadillac. Sadly, neither the GM Board nor the Cadillac marketing team took any notice. 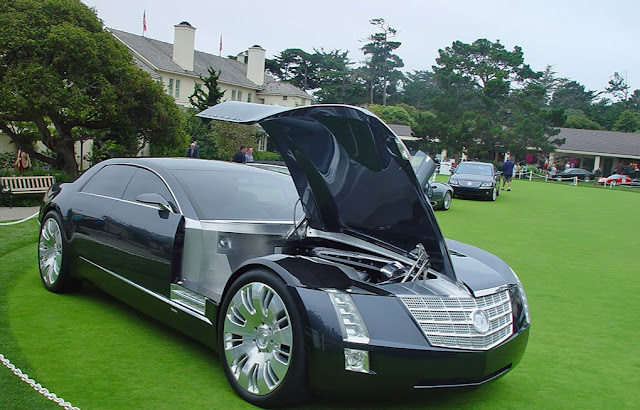 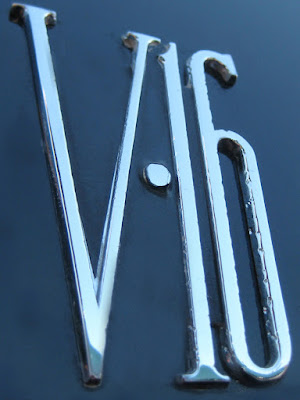 Although it didn’t go into production, the Cadillac Sixteen was featured in two full-length movies; two computer games and a TV show.
It was also tested by TOP GEAR’s James May, who was so impressed, he said “GM should make this car, it’s a blinder!”

To all of the team working under the leadership of Bob Lutz, Tom Stephens, Wayne Cherry, Brian Smith and Eric Clough, you did a great job!

Thanks to the GM Archive for many of the photos in this story.

Posted by John Crawford at 4:49 PM