There’s a plethora of great automotive books available out there about cars, carmakers, designs, designers, veteran, vintage, racing and sports cars. You know, you remember - books.

Not the kind you read on Kindle, but large format with big photos, large type, easy to read and absorb, and often tomes with a twist – of circumstance, opportunity or history.

Here’s a great all-Australian book written and produced by a good friend of mine, Paul Beranger, a designer who served for many years with GM, Toyota and Gary Millard’s independent studio.

It’s called ‘Crayon to CAD’ and if you’re at all interested in the evolution of indigenous car design in Australia, you should buy this book – it’s a treasure.

But now I’ve discovered what you could consider an obscure publication, but believe me, in the pantheon of pre-WW2 carrosserie this one, from France, is important. 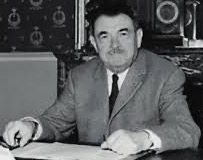 In the past ten years there has been a large number of absorbing, well researched books, especially focussing on French coachbuilders. Marcel Pourtout, Carrossier is one of the latest, and arguably the most interesting.

The creations of the Paris-based coachbuilder are legendary: the Darl’mat 2.0L Peugeot sports cars; the disappearing hardtops called “Eclipse” crafted on a variety  of makes and models; the stunning Delage D8-120 Aero of 1938, the small but beautiful confections on the Lancia Belna and Augusta chassis, and coachwork on four Talbot Lago Grand Sport chassis. 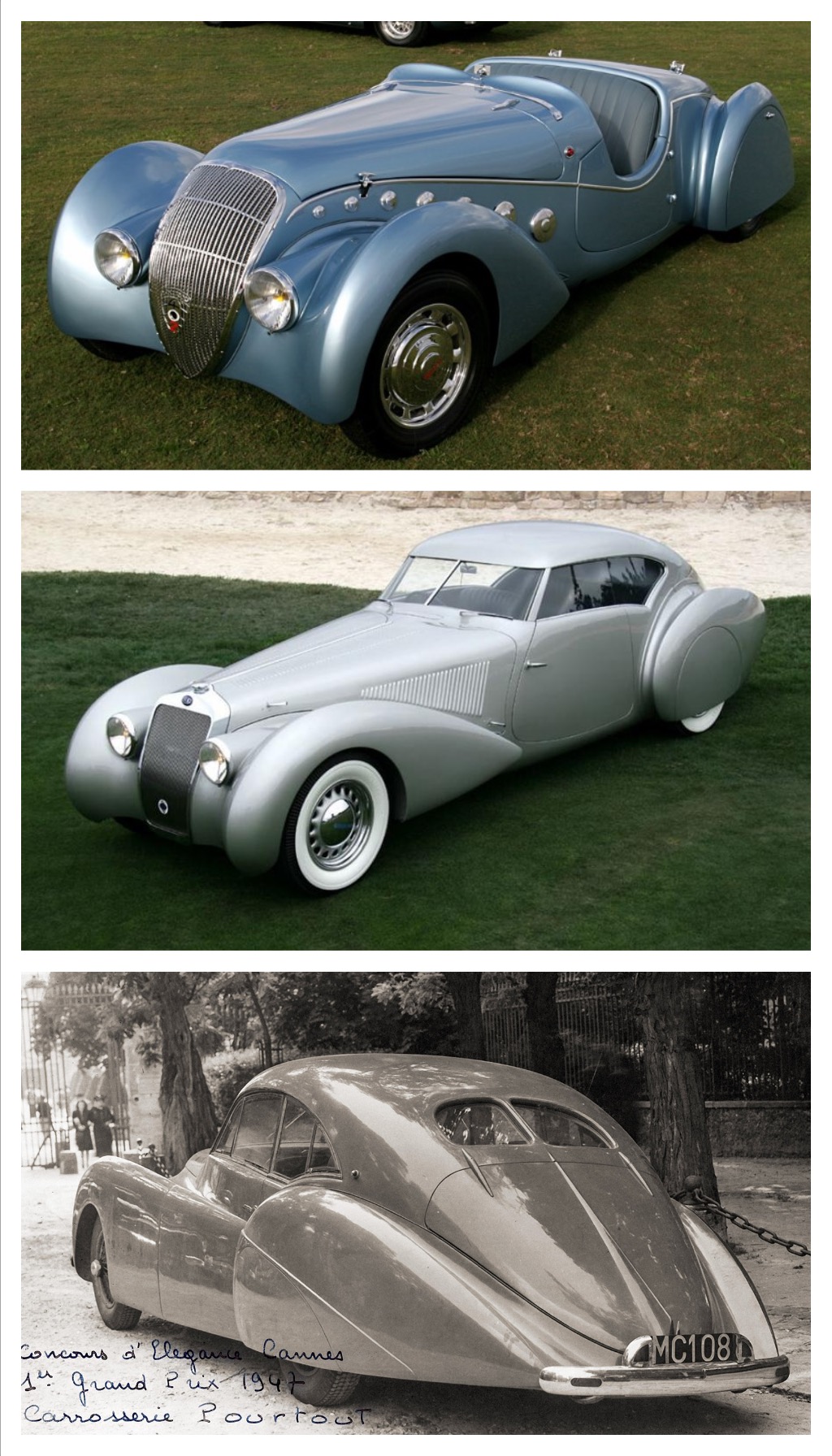 Much to its credit, long after the death of coachbuilding luxury cars, Pourtout Carrossier also created commercial bodies (as well as local jobs) well into the 1990s. 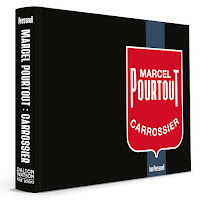 The respected British author/historian, Jon Pressnell has completed a remarkable book on Marcel Pourtout, published in English by Dalton Watson 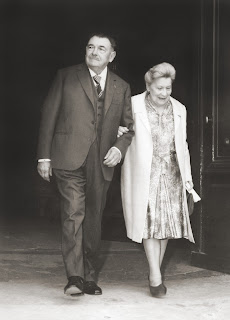 This is a story about a family business, and a remarkable family at that. Marcel Pourtout and his wife Henriette had ten children (and was given a medal for her efforts), many worked for the family business and kept it going through thick and thin.

Both Pourtout and his Carrossier were long-lived; Marcel passed away at the age of 85 in 1979, and the Pourtout firm finally folded in 1995.

And even after that the family kept and cared for the thousands of records and documents the tiny firm had accumulated over the years. In large part this was due to the efforts of the current curator of the family collection, Kevin Pourtout, one of  Marcel's 94 great grandchildren.

There are two sides to Marcel Pourtout deserving of mention: Born in 1894 to a humble family, Marcel was 20 years old when WWI began and he served with honour and heroism, being recognized on three occasions with the Croix de Guerre. (“War Cross”). His bravery was no fluke. In later years, he was elected three times as mayor of Rueil-Malmaison, and also became President of the Conseil Général de Seine-et-Oise.

While Marcel Pourtout was a good businessman and knew his craft well, he was not, apparently, a designer, draftsman, or artist - nor did he claim to be.

However, the enterprising Marcel established a very successful business, relying on the skills of artisan craftsmen, who could competently work various metals into a bewildering variety of shapes, with the finest details and finishes. 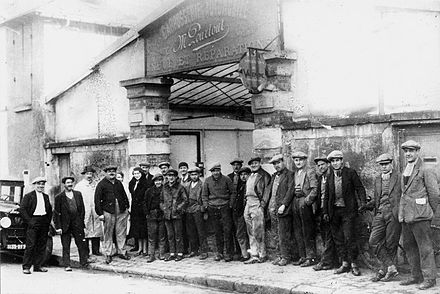 Life at Pourtout changed the day in 1933 when a neighbour and dentist named Georges Paulin visited Marcel with a way to construct a retractable steel hardtop.

Combined with the support of a successful car dealer by the name of Émile Darl’mat (1892 – 1970), Pourtout Carrosserie blossomed. With Paulin's natural skills and imagination, the world opened up for Carrosserie Pourtout - capable of delivering stylish creations.

While the text is focused on the 1930s, Pressnell rightly tells the tragic story of the war years; Pourtout’s firm was in the heart of industrial Paris, and like thousands of others he took his family south to avoid the Germans. But he was forced to return and to continue to at least try to produce ambulances and repair German war vehicles for use by the Resistance.

It was a rough time, but Marcel and his family lived through it. Not so lucky was Paulin, who, along with two fellow designers, were shot by the Germans as Resistance members, and the loss of Paulin made the post war transition for Pourtout very difficult.

In fact, the story of Paulin’s demise was sad indeed.

Born 1902 in a Jewish working class section of Paris, Paulin trained as a dentist, but he was also a pioneer of aerodynamic car design and innovative coachbuilding, with the most notable one being the world’s first retractable hardtop system, which he dubbed 'Eclipse'

In 1934, a Peugeot 401D Coupé transformable Eclipse, with coachwork by Carrosserie Pourtout, designed by Paulin, on a chassis provided by prominent Peugeot dealer Darl'mat, became the world's first coupé-convertible.

Paulin and Pourtout both fought in WW2. Georges Paulin began working with British Intelligence to fight the Nazis. Betrayed by French Vichy elements, he was arrested in 1941, sentenced to death and executed in March 1942. An escape plan had been arranged by the British, but Paulin declined to use it, and sacrificed himself in order to protect his team.

He was posthumously awarded the Croix de Guerre and the Médaille de la Résistance by the French government.

These two talented Frenchmen had significant impact on car design in the post WW2 era.

One in particular that is close to my heart, is the Bentley Continental chassis which was fitted with a Paulin-designed body for Greek tycoon André Embiricos in 1938.

This car was a one-off, but served as inspiration for the 1952 Continental, and it was also entered in the 24 Hours of Le Mans, three times, once finishing as high as 6th. 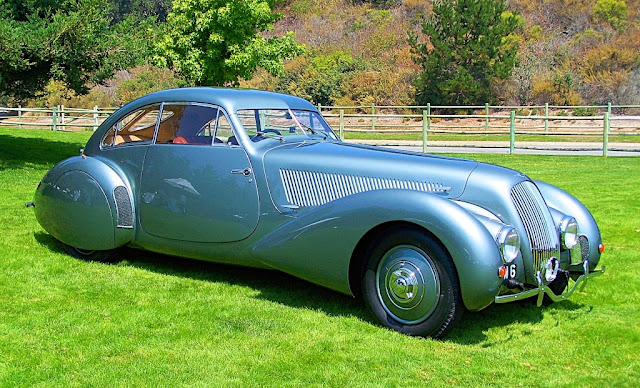 The book highlights the influence both Italian and French body builders wielded in the post-war era, when the growing number of successful businessmen demanded independent designs built on their chassis of choice. However, if you Google the names Pourtout and Paulin you will be surprised how many creations came from this French design-tour-de-force.