I’m no stranger to styling studios, and despite the roles I’ve held at a number of significant brands, my close friendships with a number of key Heads of Design at a variety of competitor companies has allowed me access to a huge range of new (and top secret) concepts, which were moving from sketchpads, to tape drawings, and then to full size clays. 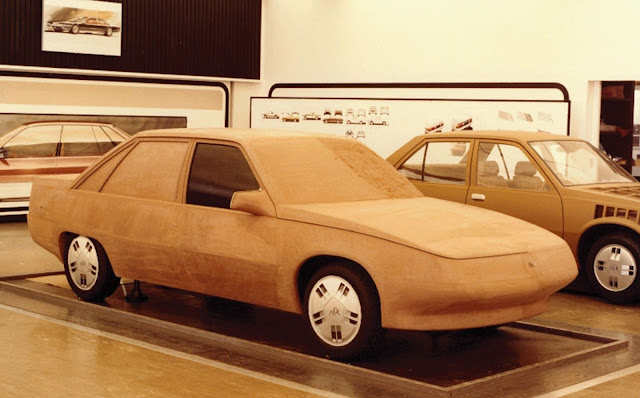 This is a pretty unusual situation, because normally you never allow a competitor to ‘see into your future’. I am grateful that my integrity, and confidentiality in seeing these ‘secrets in the making’ have been respected sufficiently for me to just chat to designer mates about ‘design stuff’.

After I joined Rolls-Royce & Bentley Motor Cars in 1998 I asked the then Chairman, my good friend, Graham Morris, if someone could take me on a guided tour of the Crewe works. Graham unearthed one of the original factory guides and his running commentary would have filled a history book. 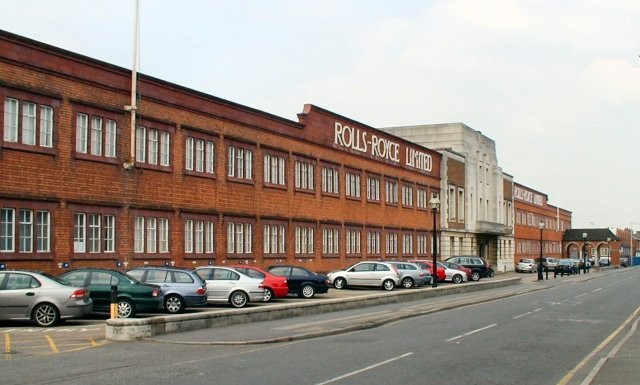 Towards the end of the tour Harry and I walked past a fairly non-descript brick building, which Harry said was the styling studio. I asked if that was included in the tour, to which he replied, “Only if the ‘Guvnor’ approves (meaning the Chairman).”

I said, “Well let’s call him up and get permission.” Harry replied: “No-one just calls up the Chairman matey.” To cut a long story short, I went to the Reception desk, called up Graham Morris, who phoned down to the studio and cleared the way.

Harry was impressed, but put the success down to simply being a brash Aussie. “You blokes get away wiv’ murder over ‘ere. I must say you’ve got a lot of ‘front’ just phoning up Mr. Morris like that.” 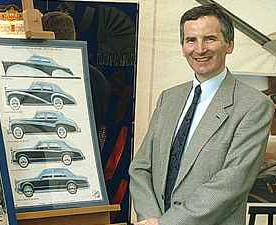 We went through a security airlock into the studio to be greeted by the most low-key chief designer I think I have ever met – Graham Hull. He spoke softly, keeping his sentences short.
If you thought you’d pick up some gems in conversation, Graham was not the guy to be talking to.

Pinned to the wall was a sketch featuring a trio of cars designed by Graham.

They represented the forthcoming Bentley Arnage saloon, but hidden in the middle was an original rendering of what morphed into a project called ‘MSB’ – Medium Sized Bentley. 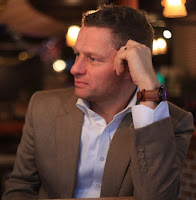 It was also the day I met one of the most inspiring young designers I had ever met, Simon Loasby – who now leads exterior design for Hyundai in Namyang, Korea.

Simon was already working up renderings of ‘MSB’ – and Graham Hull had not been invited to participate in the program. 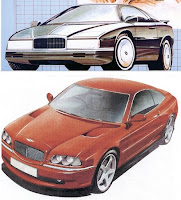 Simon explained the reason for Graham Hull’s reticence was that since the Volkswagen takeover, VW’s Chief Designer, Hartmut Warkus, had visited the studio, and on his return to Wolfsburg advised Dr. Piëch to ‘clean out the place’ and get a decent design team in there ‘tout suite’!

After Hull’s decision to retire it wasn’t long before a trio of young designers took over the Crewe studio.

Led by one of VW’s bright new talents, Dirk van Braekel, as Head of Design, the team included a Brazilian-Italian, Raul Pires (exteriors), plus a quiet and sophisticated Brit, Robin Page (Interiors). 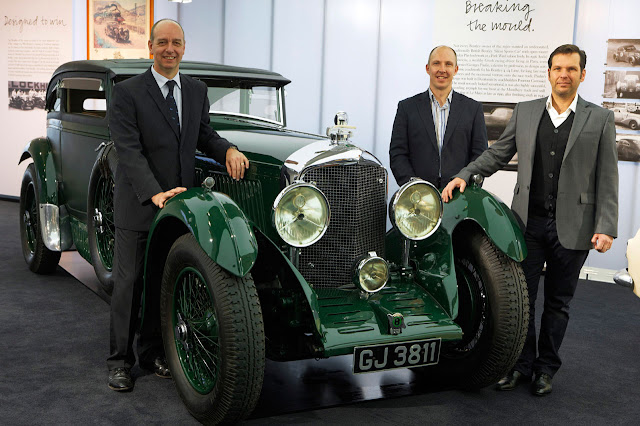 My first meeting with this team occurred literally the week that Mr. Warkus had approved the first sketches for the concept that was to become the Bentley Continental GT coupe - probably, by now, the most commercially-successful Bentley ever launched.

Despite the overwhelmingly daring nature of Raul Pires’ first exterior sketches, it was the interior designs which really caught my eye. 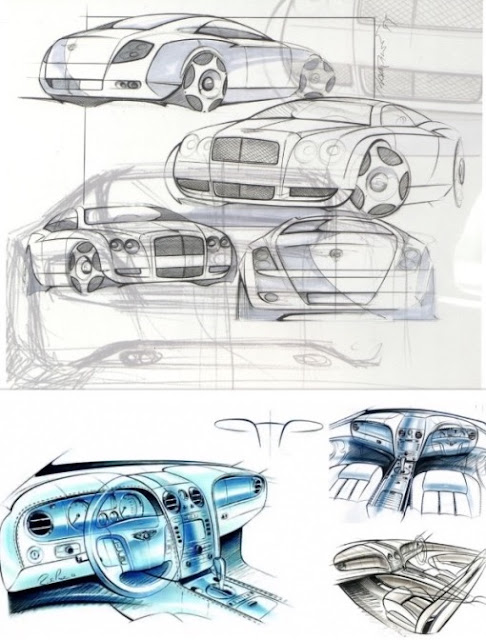 Robin Page showed that for a young man (at the very start of his, so far, illustrious career in car design), his drawings were sophisticated, unified and original. Yes, there may have been ‘just a taste’ of ‘old’ Bentley to inform Robin’s ideas, but his cohesive design was fresh, new and imposing. 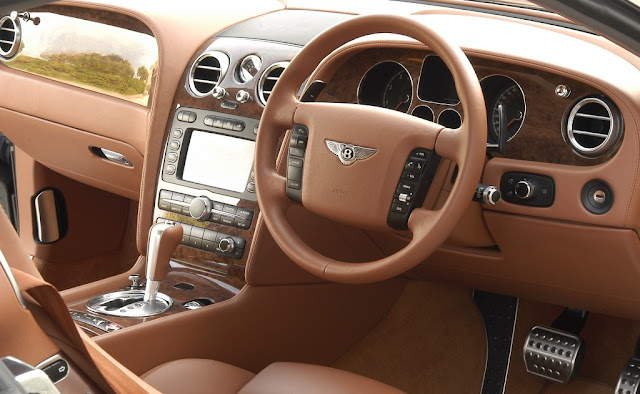 Robin’s design future began at age 12, when his next-door neighbour, a lecturer in Transport Design at Coventry University, asked him what he wanted to do as a career. Robin said, “I like to draw, solve problems and I love cars”. 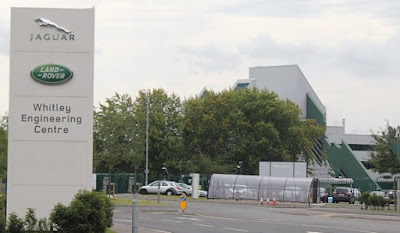 Robin told me: “He advised me to do an apprenticeship in design engineering, and in the evening extra studies in fine art. So, I applied to Jaguar Cars, which was the best apprenticeship at the time.

I spent the first two of my four years learning all the engineering skills and the last two years spending at least 2 weeks in every department from the shop floor to shadowing the top management teams. In the evenings I studied engineering and fine art.”

“I also worked in exterior body engineering. It was an extremely quick learning curve which gave me great experience for making feasible designs, which would be vital in my future career, and I learned how to fight for my designs.”

“After completing my apprenticeship, I worked for a year for Trevor Laight (at Jaguar) and then left to complete my dream of doing the Transport Design course at Coventry University. I studied from 1992 to 1995 and then immediately got the job at Rolls-Royce and Bentley.” 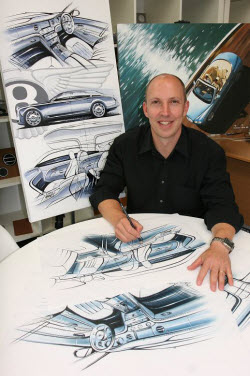 “On reflection, I did question why I did the apprenticeship in engineering when my fellow students had come from a pure art background.

The reality hit me hard as soon as I started at Rolls-Royce and Bentley - because as soon as you created a piece of design, you are immediately challenged by engineering.

This is where the experience during my apprenticeship was critical. I had the knowledge, experience, and tools to justify the feasibility of my work.” said Robin.

By the time I retired from Bentley Motors North America in 2006, Robin had been busy refreshing the interiors of the coupe, through the Flying Spur saloon, and the Continental convertible.

His next project in 2005 was the new Bentley Mulsanne saloon.

In 2009 I was witness to his work when the Mulsanne made its global debut on the main stage at the Pebble Beach Concours d’Elegance, wowing the crowd. 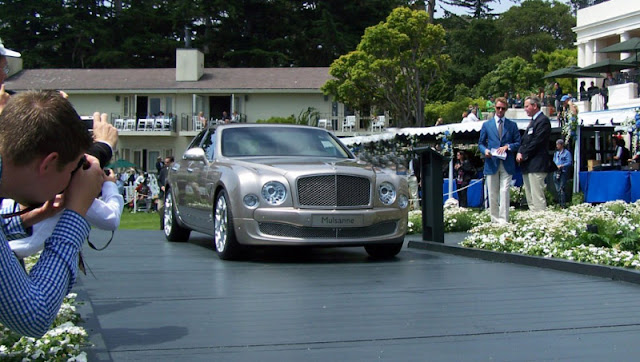 I continue to maintain regular contact with Dirk van Braekel who always emphasised to me what a great privilege it had been to work with two such inspired young designers like Raul Pires and Robin Page. 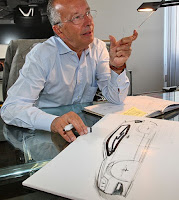 In 2011-2012 at the request of VWAG’s Head of Design, Walter de Silva (left), Robin also worked on a Bugatti project designing a future interior concept, then in 2013 Robin accepted a new challenge from Volvo, which wanted to achieve a more premium feel in the interior design of its future concepts.

He led the interior design team in the creation of the award-winning trio of concept cars, and the final creation of the New 90 range, 60 range and new XC40, which have already symbolized a large step forward for a more premium feel.

In 2015, he received the Interior Designer of the Year award as a symbol of his success of his new design work for Volvo. Then in 2017, Robin Page was promoted to Global Head of Volvo design to lead the team, to create the next generation of Volvo cars, and support the Polestar range.

Since that promotion he has introduced the future vision of the full autonomous 360c Concept; model year updates for the full Volvo range; and an introduction of the XC40/C40 full electric car (right).

He has also introduced the Concept Recharge, which is a manifesto for Volvo’s next generation of cars, led by the exciting new Volvo EX90 launched in Sweden this week. 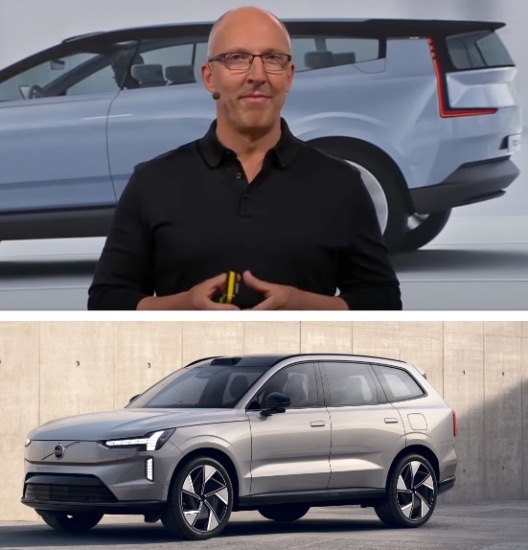 I’m proud to call Robin a good friend, and thrilled I was able to recognise his prodigious talents when we first met at Bentley in Crewe in 2000.

You’ll be hearing a lot more of this talented designer.