Those of us brought up on English childrens' books will recall tales of smugglers slipping in and out of secluded bays at many places along the English coast, but none more so than under the rugged cliffs of . 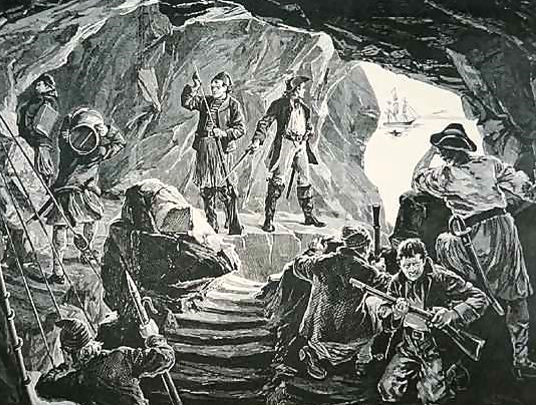 Smuggling was big business there up to the 19th century, with small boats putting out to sea under cover of darkness to meet ships coming over from to transfer their contraband.


I was one of those kids who romanticised the stories, and when the opportunity came to cruise the Dorset coast roads, back in 1997, in a Jaguar XK coupe, it seemed like a very appropriate thing to do, and it delivered vivid memories.

Not only of the rugged coastline, but the great driving roads, and a bunch of tiny villages with silly names, like Puddletown, Piddlehinton, Affpuddle, Droop, Toller Porcorum and Haselbury Plucknett. 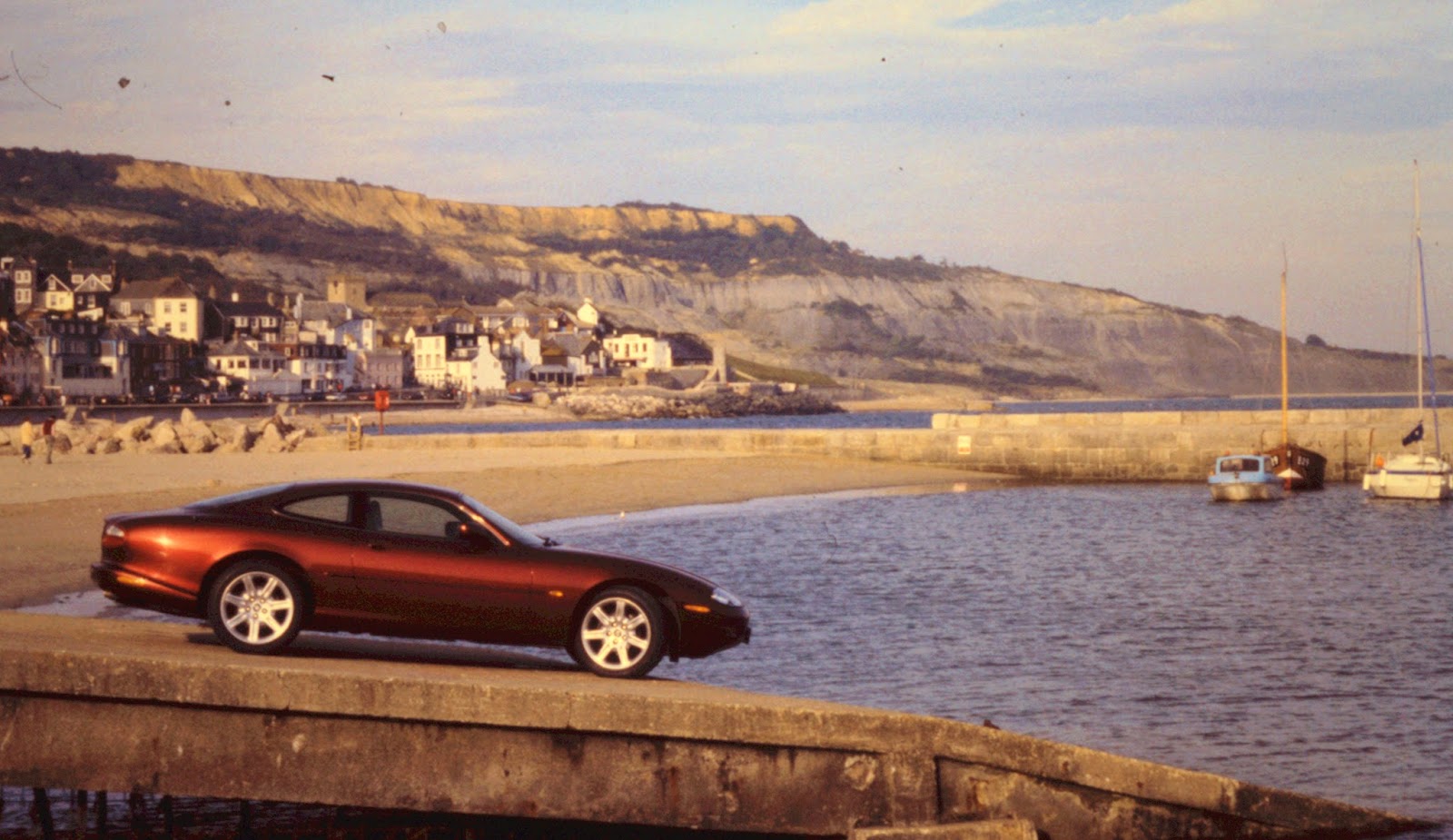 We made a base at the coastal town of , which received its royal charter from Edward 1st in 1284. There's no natural harbour, so back in the 1250s the locals built an ambitiously-conceived breakwater, constructed by driving massive oak tree trunks into the seabed and filling between them with huge local rocks. It was called 'The Cobb' and managed to hold the sea at bay and create a safe harbour. 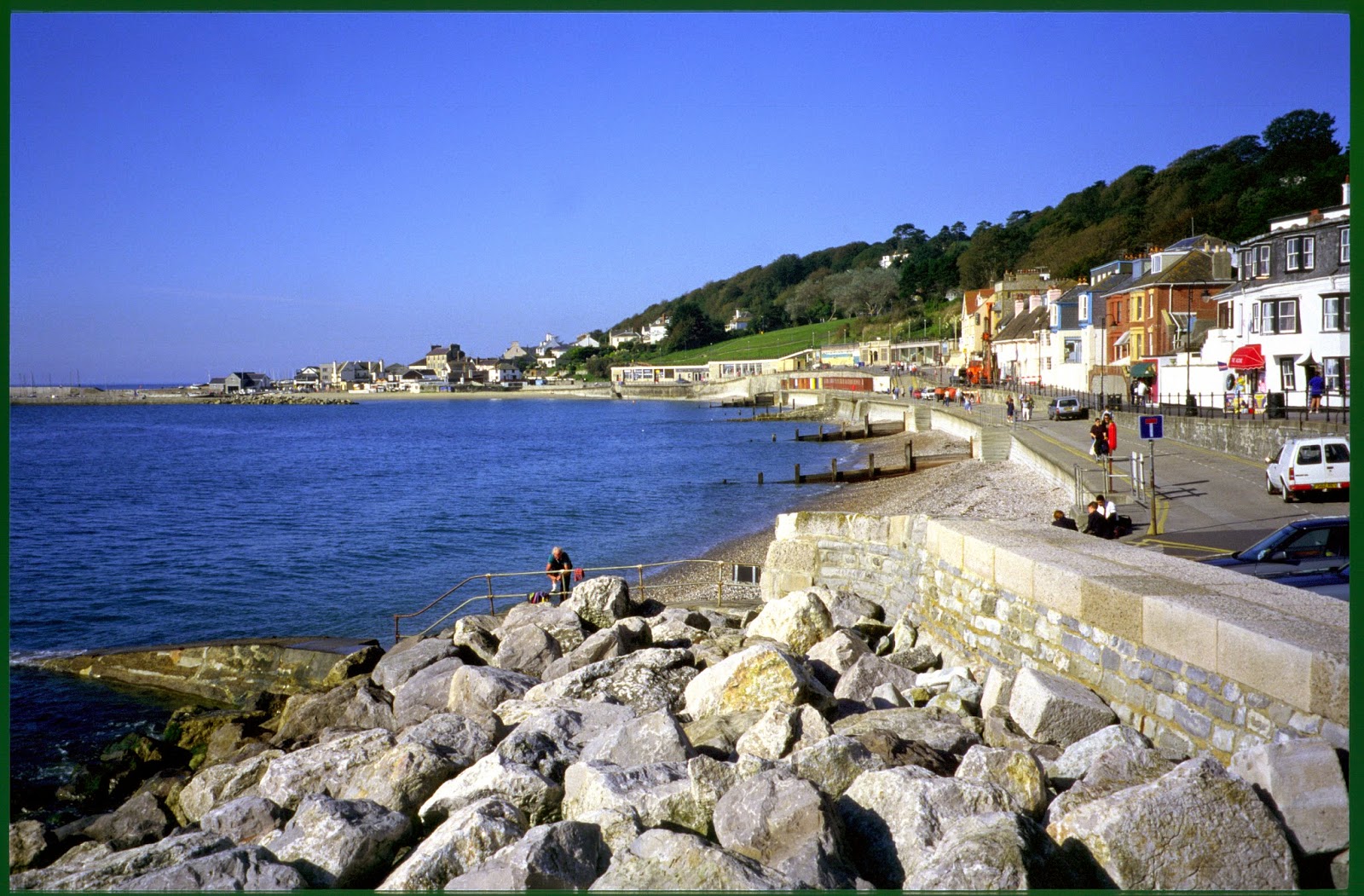 ﻿
Mind you, the original Cobb only lasted 570 years, and had to be rebuilt in order to house fishing and pleasure craft. 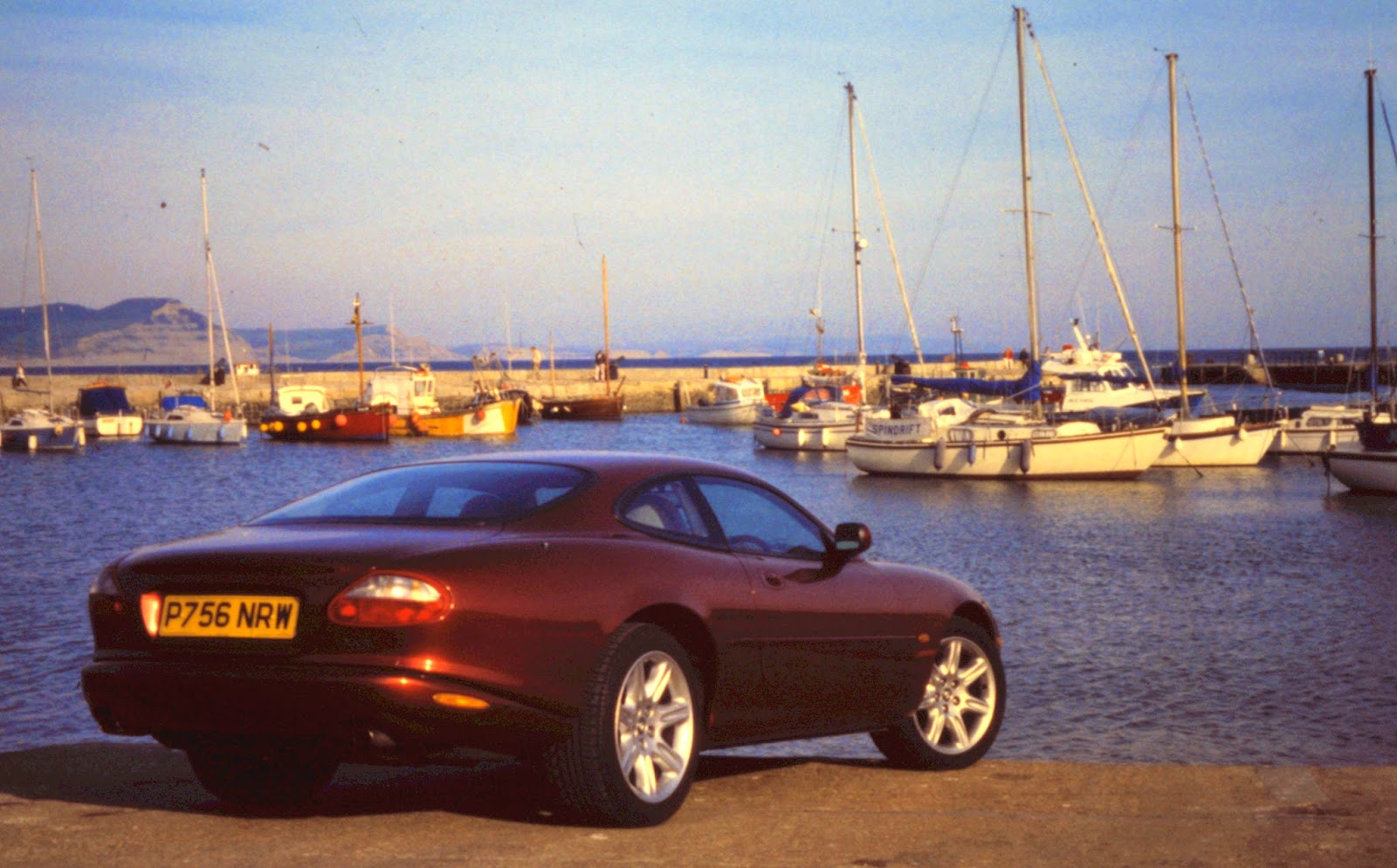 All of the main hotels in Lyme Regis are on the waterfront, and there's plenty of B&Bs scattered throughout the town. Mind you, it's not a huge place, the main street is only 500 metres long! 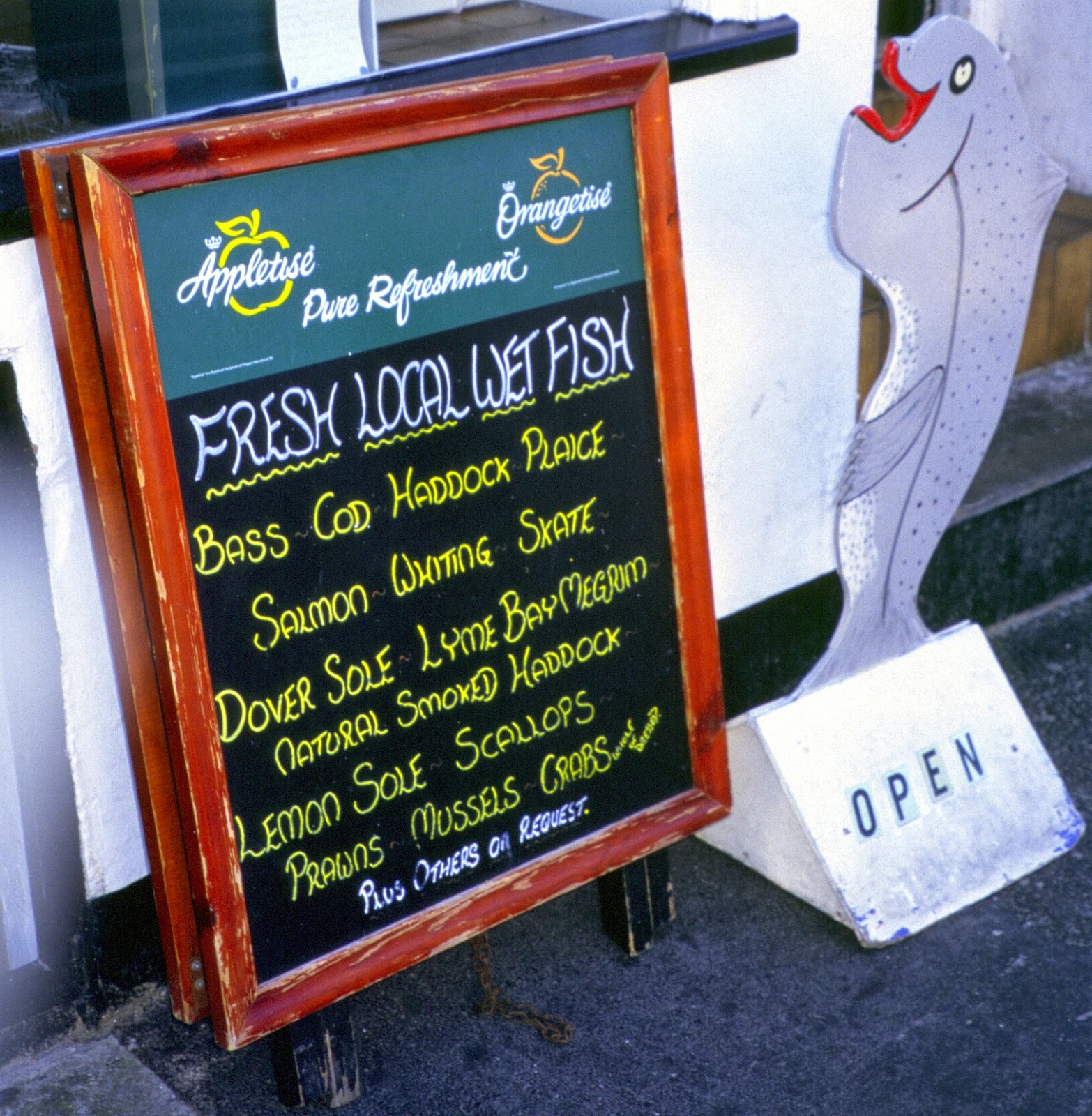 It's famous for fresh seafood, and you can get all the usual delicacies, but the cod and sole are fantastic!
Hurry along though, because even back in 1997, the local fisherman told me there were already signs that the local waters were being fished-out.

The drive from Heathrow to Lyme Regis took about three and a half hours, travelling down the M3, then A303, until reaching Honiton, then you take the A35 back (east) to Lyme Regis.


That's the quickest way, but if you want to dawdle and take in local tourist spots, you can break off the A303 just west of , and take the A338 into ; then the A354 down through Sixpenny Handley, Blandford Forum, and , before picking up the A35, and going to Lyme Regis via Bridport. 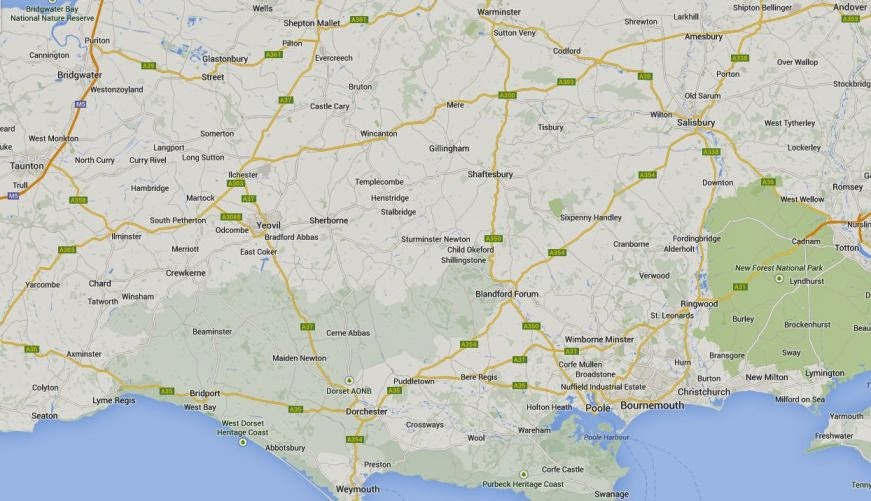 Once based in Lyme Regis, it's best to take day trips to explore the surrounding area. Grab a map and draw a line west to east, parallel with the south coast from Taunton in the West, to Shaftesbury in the East, and within that part of Dorset will be enough great driving roads (and leafy lanes), plus picturesque villages, and great pubs to keep you occupied for a week.


Returning to home base from Yeovil, down the A37, you'll pass 'The Giant' which is a huge figure carved eons ago into the chalk hillside, near Cerne Abbas.


Lyme Regis played a big part in British naval history, because it was from here that Sir Francis Drake first engaged the Spanish Armada in 1588.


Between 1780 and 1830, is when the area won its reputation as a smugglers' playground. The Customs agents used to keep watch from the great cliffs at Charmouth, trying to apprehend the nefarious boatmen.


If you take yourself to the clifftops early in the morning, the sea mist swirls around eerily, and the silence is only broken by the mournful sound of fog horns and the plaintive cry of seabirds.


There's so much great touring to do all over , but this relatively quiet and undiscovered part of the south west is certainly worth investigating.