BENTLEY IN AMERICA - MAKING A MARQUE (Part 3) - by John Crawford 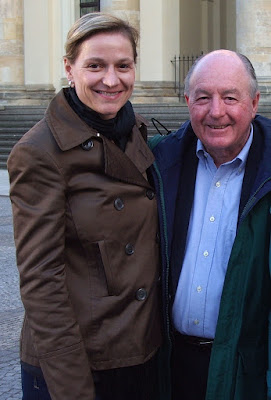 Establishing a presence for Bentley in the lifestyle media scene in the USA demanded a dedicated resource, and I was thrilled when the PR Manager from our central European office in Berlin, Annette Koch, accepted our offer to join the small PR team in Detroit.

We could never have achieved the results we did without her unwavering commitment, her European style and sophistication, and her complete focus on the challenge.

Over to you Annette ….

When I arrived in Michigan in 2003, the range of programs encompassing the automotive media were coming to fruition, and we decided it was time to broaden the appeal of Bentley cars, so we immediately implemented programs focussing on the ‘lifestyle’ outlets of the American media scene.

Consistent with our whole PR approach to the challenges of establishing Bentley as a new brand, and also introducing a consistent set of brand values across all sections of the media, I was assigned to infiltrate as many levels of the lifestyle media landscape as we could, with quite meagre resources, and the task of targeting the luxury and fashion industry, personalities in the public eye, and eventually entwining these activities with Bentley cars, to complete the circle.

PR Director John Crawford gave me whatever resources he had available, but left it entirely to me, to develop programs which would appeal to a range of creative types, who probably never envisaged that ‘their brand’ could work with a British automotive icon.

Ultimately, this led to me spending quite a lot of time in New York, and occasionally Los Angeles and Chicago, as I created a ‘model’, or modus operandi I could utilise consistently across the country, which would deliver results.

Starting with the fashion industry, it was of course impossible to attempt high visibility sponsorships associated with high value consumer brands, because we simply didn’t have the budget.

However, I did identify a lot of opportunities in the luxury business as such, which would bring the Bentley name to prominence, albeit in a more circuitous manner.

The contacts which we successfully established were a combination of three opportunities: Firstly, partnerships which Bentley Motors headquarters in Crewe, UK had built and which we transferred to the respective representatives in the U.S. such as Breitling watches for example.

Secondly, contacts introduced by the branding agency Visual Therapy, which we took on board to help us. 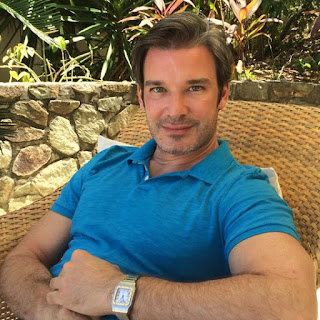 The principals, Joe Lupo (right) and Jesse Garza were invaluable in helping me understand the ins and outs of the American lifestyle media; the high society landscape; and luxury buying patterns.
And last but not least, contacts which we established ourselves by having a clear focus on key publications, socialites and media personalities.

The timing could not have been better: We had just launched the new Bentley Continental GT, a stunning grand tourer and the perfect combination of power, performance, presence and luxury.

It appealed to the Zeitgeist: Traditional British craftsmanship; German technology; and a very contemporary and understated design. All of a sudden Bentley was an aspirational brand.

And yet, it still remained a huge task to make it known in such a large and diverse market as the USA. To make it appeal to people who had previously not thought of buying a premium luxury car, or who had no understanding at all of what a modern Bentley would even look like.

This led to the idea of the “Bentley VIP Party”: Its goal was to show Bentley in totally unexpected surroundings, to a completely new audience.

So, to launch the Continental GT on the West Coast we showcased it like a piece of art in the Gagosian Gallery on Camden Drive, Los Angeles.

In New York we put it into the new and trendy Heller Gallery in the Meatpacking District which was quite a bold move at the time.

By partnering with likeminded luxury partners for the parties, for example NetJets, Breitling, a variety of jewellery brands, and British luxury hotels such as Claridges or The Connaught, we introduced our brand to a whole new clientele.

And at the same time, we made best use of a limited budget as all partners contributed financially to the events. Alongside media partnerships with The Robb Report, Hamptons Cottages & Gardens or Ocean Drive Magazine, for example, we added another lifestyle dimension to our events. And generated coverage in our target media outlets. 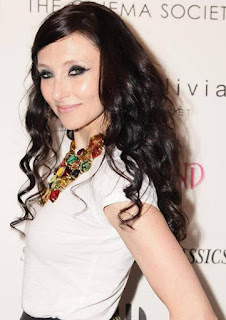 We even contrived to become involved on the fringe of New York’s Fashion Week, with a low budget partnership with the new and growing fashion label Alice&Olivia, discovered by Visual Therapy.

The label was started by young designer Stacey Bendet (right), and true to Joe Lupo’s predictions she went on to become a major designer, now selling in 50 countries!

So, it was just the right way to attach Bentley to Fashion Week – rubbing shoulders with Fashion Week’s major, multi-million-dollar sponsor, Mercedes-Benz!

Vanity Fair's Amy Fine Collins (above), dedicated a chapter of her book “The God of Driving” to the Bentley Continental GT. The book describes how she managed to overcome her fear of driving, with a talented driving instructor.
Amy's book launch event in New York was very high-value exposure. 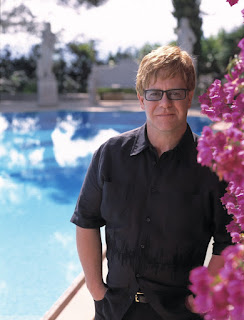 Yet, arguably, the biggest coup was that we managed to become an integral partner of one of the most important fixtures in Hollywood’s society calendar: The Elton John AIDS Foundation Oscar Party. This is where we auctioned off the first Bentley Continental GT to be delivered to a US customer.
In addition to fantastic visibility, we were thrilled to contribute to such an important charity.

Annette returned to Europe in 2006, taking with her all her experience and achievements, and went on to further entrench Bentley into European media, working with Bentley dealers in Moscow, Kiev, Riga, Tallinn, Warsaw, Stockholm, Athens and Copenhagen. She was an invaluable asset to establishing a credible image for Bentley in America, and Europe. 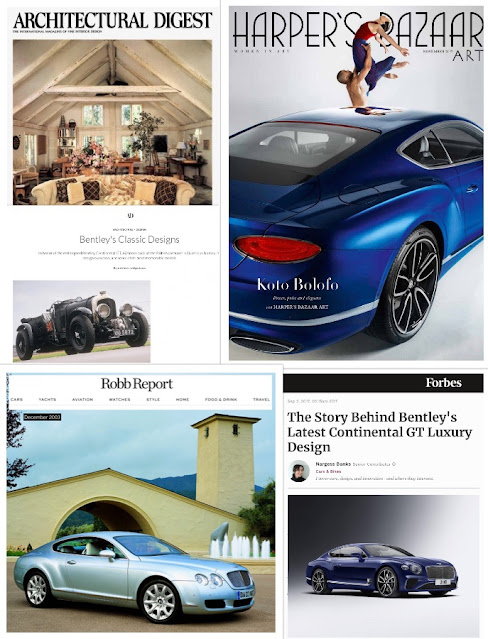 The original idea, to introduce automotive coverage into lifestyle magazines eventually began to pay off, with magazines as diverse as Architectural Digest, Harper's Bazaar, Forbes, plus the cover of The Robb Report.

Having Bentley widely accepted as a premium luxury performance car in its own right, after years of being hidden in the shadow of Rolls-Royce was achieved in just four years.

It's also interesting that the overall shape of the latest Continental GT has only changed with detailed design evolution, rather than complete change.

As the years went on we celebrated original Bentley buyers from the art and fashion worlds, who re-purchased newer Bentleys, like Cindy Crawford, Ralph Lauren and Australian singer Delta Goodrem. 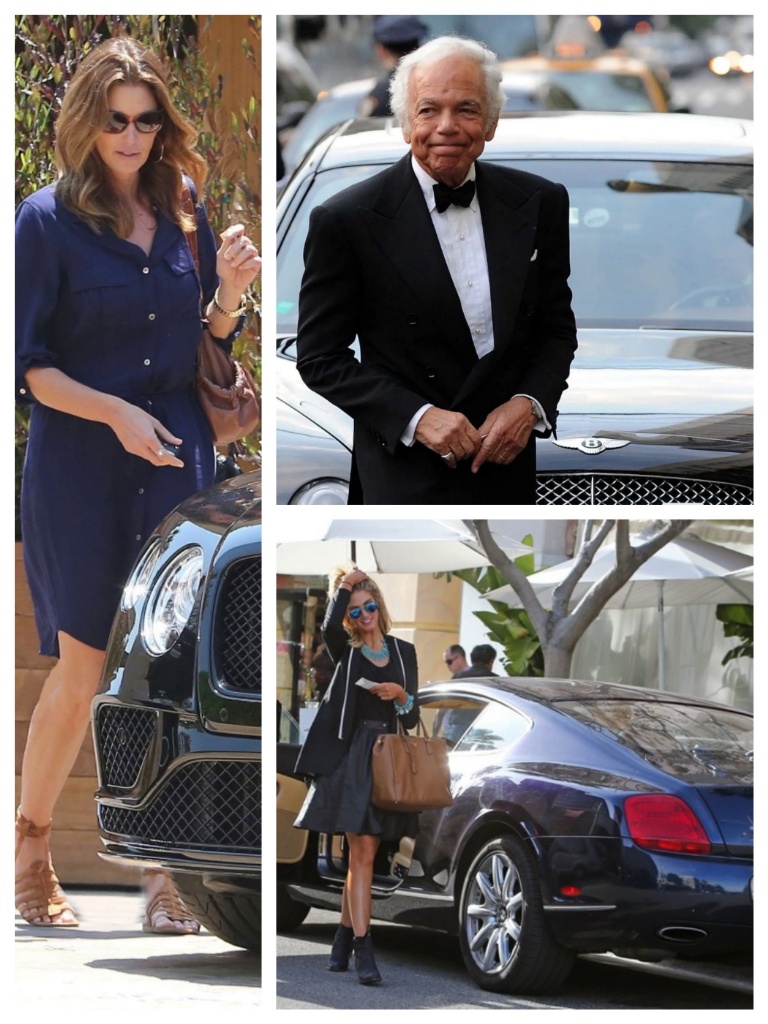 I am very confident that the multi-layered approach to giving Bentley a ‘push’ into, then, the world’s most competitive luxury market was exactly the right recipe, especially given the careful allocation of a relatively low level of resources.

I think the end result, where Bentley posed with fashion models; was used as an accessory in fashion shoots; winning major automotive design awards; and the Brand used as a reference for precision and quality simply completed the circle we started in 1998. 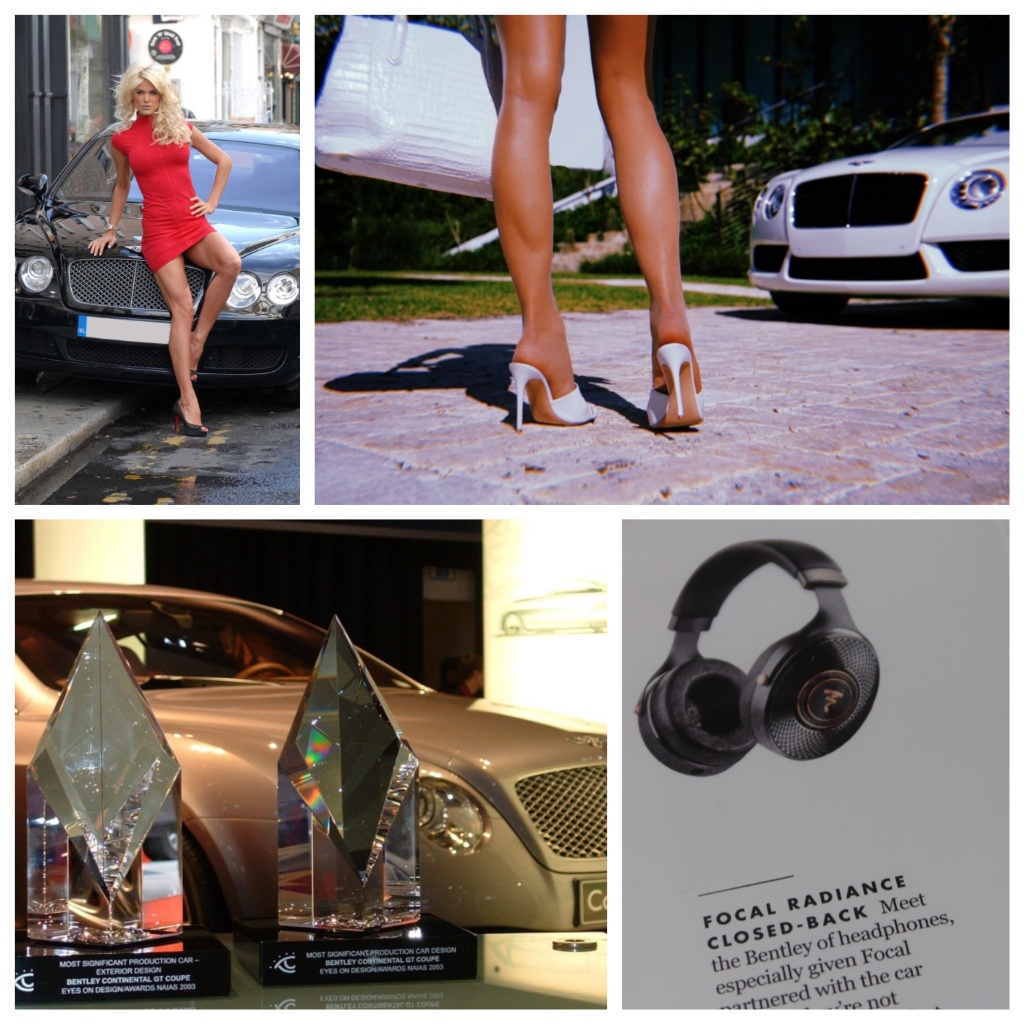 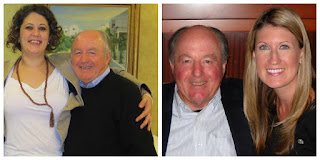 However, the most significant contributor was the combination of innovative thinking and hard work by my own staff, Deniz and Beth, plus Annette Koch's innate sense of style, and a tremendously experienced and energetic PR agency in Los Angeles, JMPR, led by the inexhaustible Joe Molina.

Posted by John Crawford at 9:30 PM