IS BENTLEY AS BRITISH AS CRICKET? by John Crawford 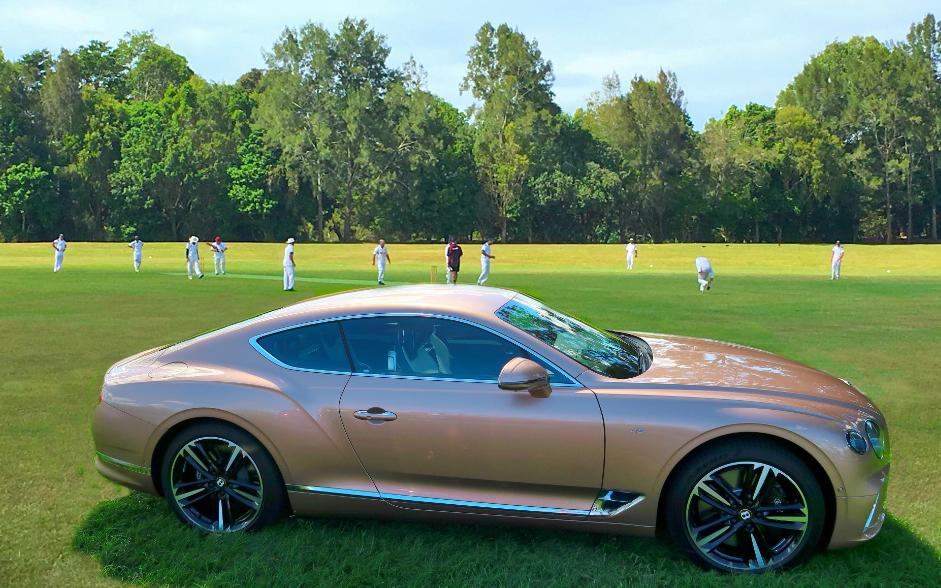 You bet it is. If not right at its core, then definitely in all the areas where British carmakers traditionally excel. 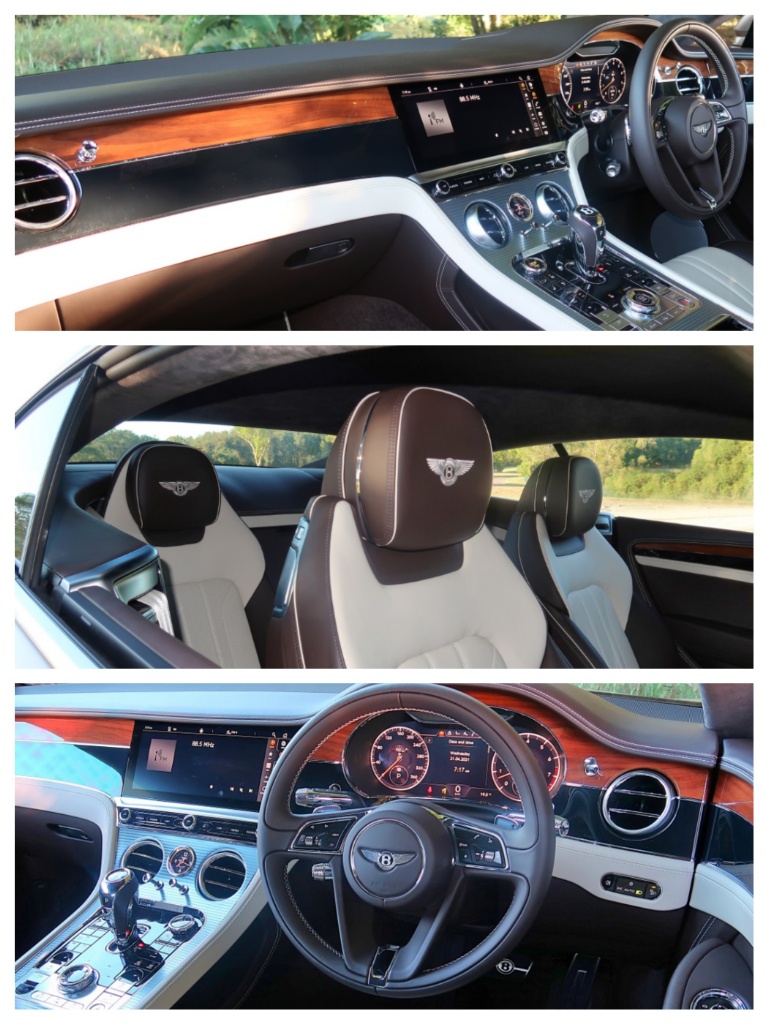 When the Continental GT (BY614) debuted in 2003, with its unusual, torquey 6-litre W12 engine there was more than a touch of Teutonic messing-around, thanks to Volkswagen Group’s acquisition of the famed British bruiser brand in 1998.

The new-age Continental shared its platform with Volkswagen’s (D1) Phaeton luxury sedan, an under-appreciated gem, but one of chairman Ferdinand Piëch’s vanity projects - alongside the Bugatti Veyron.

The body-in-white was stamped in Germany, plus the electrics and the all-wheel-drive system were all from the VW parts bin. And then there was the engine, designed by Piëch himself, and literally sketched on the back of an envelope over dinner with his closest engineering pals. 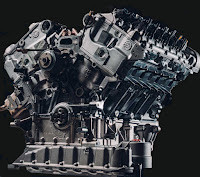 “See here," said Ferdy, to the boys around the table. “We take the humble, narrow-angle V6 (15 degrees) we developed for the Golf, put two of them together like a Big W, on a common crankshaft, and we’ve got ourselves a suitable grand touring engine.”

The newly-single Bentley Motors (now freed from the shackles of second-tier status in its marriage to Rolls-Royce) willingly agreed to all these German contributions because it was short of cash, short of engineers, and short on the facilities to make all this good stuff for its new GT coupe.

Dr. Piëch was planning this assault on the premium performance market hand-in-glove with what the Brits do best – tasteful, understated design; wood and leather in the cabin;  exemplary ride and handling; precision engineering; plus the craftsmen and women in Crewe, Cheshire, who were more than capable of combining the tectonic Teutonic mechanicals with the atmosphere of a private London club. 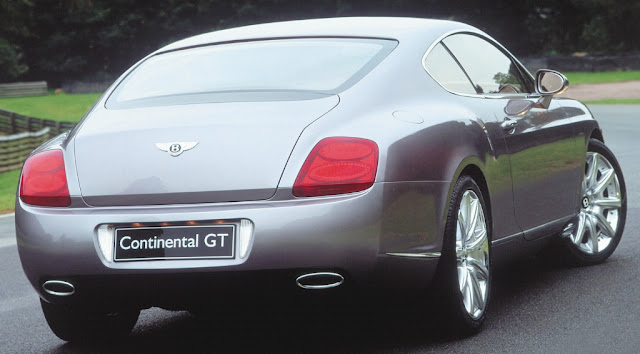 The VWAG Board was less than happy with the launch price of USD$169,000 as a proper return on assets, but it was the sweet spot which saw the Continental GT launch itself into the American market like a Saturn rocket on steroids.

Then, there was the design itself. It was created by a wonderful combination of experience, youth, talent, taste and a perfect understanding of what would strongly resonate with the ‘new’ Bentley customers.

Up until then, the Bentley wings had only adorned clones of Rolls-Royce models – with the grille and the badging providing the only real difference between Bentleys and Rollers. 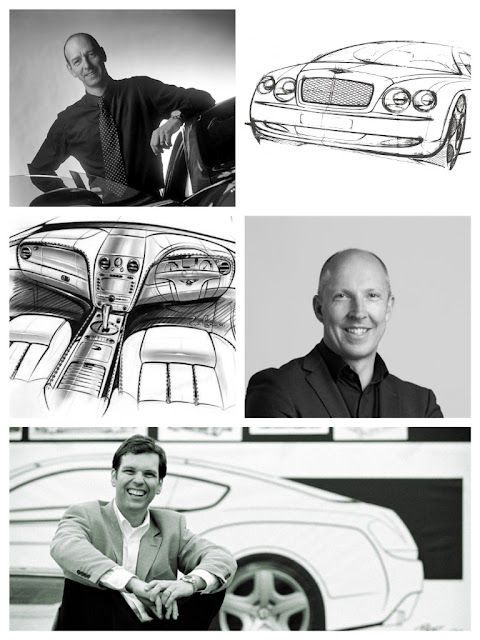 Design Director, Dirk van Braekel, gathered a brilliant team for the Continental GT coupe. The exterior was penned by a refreshing, Brazilian-Italian named Raul Pires, and a sophisticated young British designer, Robin Page, produced the now-famous double horseshoe interior concept.
It was an instant success and paved the way for Bentley’s financial security within the giant VW empire.
Make no mistake. After paying dearly to 'own' Bentley, VWAG continued to invest huge amounts - both in new models, as well as it's three year racing program to reclaim its historical heritage of winning Le Mans five times in seven years in the 20s and 30s!

Many highly-respected automotive designers were openly questioning just how Bentley could ‘facelift’ the original design, as many considered the first GT coupe like a diamond that was going to be very hard to re-cut successfully into a new setting.

A number of designers have had their turn at Bentley’s works in Crewe but, with the launch of the 2021 Bentley Continental GT coupe and convertible, we have to thank a relatively unknown German, Stefan Sielaff (right).

He spent most of his time at VWAG with Audi, then had a three-year break with rival Daimler Benz. His design work started with interiors, before he was appointed Head of Exterior Design for Audi, but quite frankly his exterior work on the new Continental GT is, in my opinion, nothing short of breathtaking.

Stefan has managed what I considered impossible. He has refined the overall shape, introducing subtle accents, creating very attractive style lines and creases which have (can I be saying this?) improved on the original.

The 2021 Continental GT is contemporary, stylish, fresh, and - the best compliment I can pay - it boasts impressive 'presence'.

So, does the latest Continental GT have the chops to lay claim to a piece of automotive art? It does for me.

Not only does the interior boast a phalanx of jewel-like features, including knurled finishes and delicate design touches, but the exterior is also a piece of automotive sculpture.

Sadly, Bentley has lost Stefan to Geely, because the Chinese could offer more US dollars to induce the German to get into bed with Volvo, where he will replace long-time styling chief, Peter Horbury. VW will engage in musical chairs to re-assign Andreas Mindt (right), designer of the 1999 Bentley Hunaudieres concept, as his replacement.

Just talking to Bentley salesmen, they tell me that there is unprecedented interest in the Continental coupe and convertible, with demand driven by the appeal of the new V8.

Bentley shares this bent eight with the Audi RS models, and the underlying architecture can be traced back to the engine which powered the Bentley Speed 8 prototype to its momentous victory in the 2003 Vingt Quatre Heures du Mans in France. 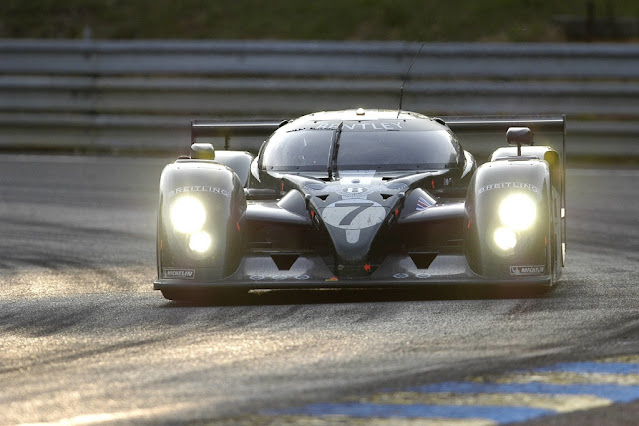 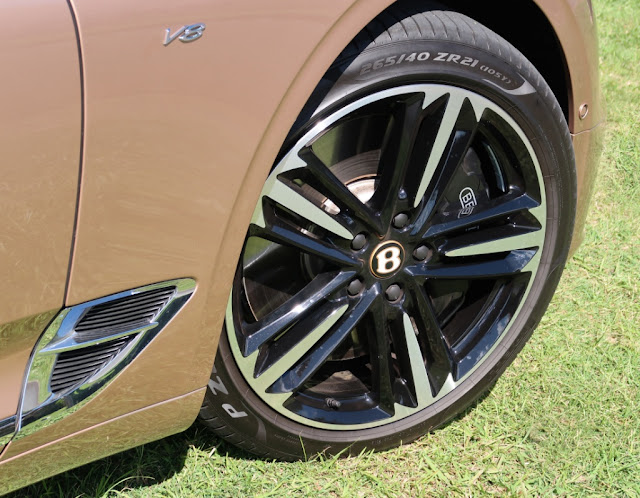 In Sport mode, this V8 delivers in every department – a crisp and raspy exhaust note, fantastic response, and impressive flexibility.

I didn’t measure fuel economy (I was having too much fun), but many other road test reports say there’s very little difference between the V8 and the W12 – and that’s got a lot to do with how much fun they are to drive.

Actually, weight is the issue. The V8 is reportedly 100kg lighter than the W12, but the racy response engenders greater fuel use. The heavier W12 means you are sucking in more fuel just to keep the big bruiser at autobahn speeds. But, really, no-one buys a Bentley for its fuel economy.

As I was unable to do any form of back-to-back comparison testing between the V8 and W12, I’ll have to rely on my memory synapses running hot with messages flooding my brain - telling me the V8-engined car is lighter, sprightlier, more responsive, and a lot of fun on the limit.

On the deep country roads I use for ride and handling testing (location not revealed), I was thrilled with the stability and adhesion exerted by the combination of a well-sorted suspension and prodigious grip of Pirelli P-Zeros. 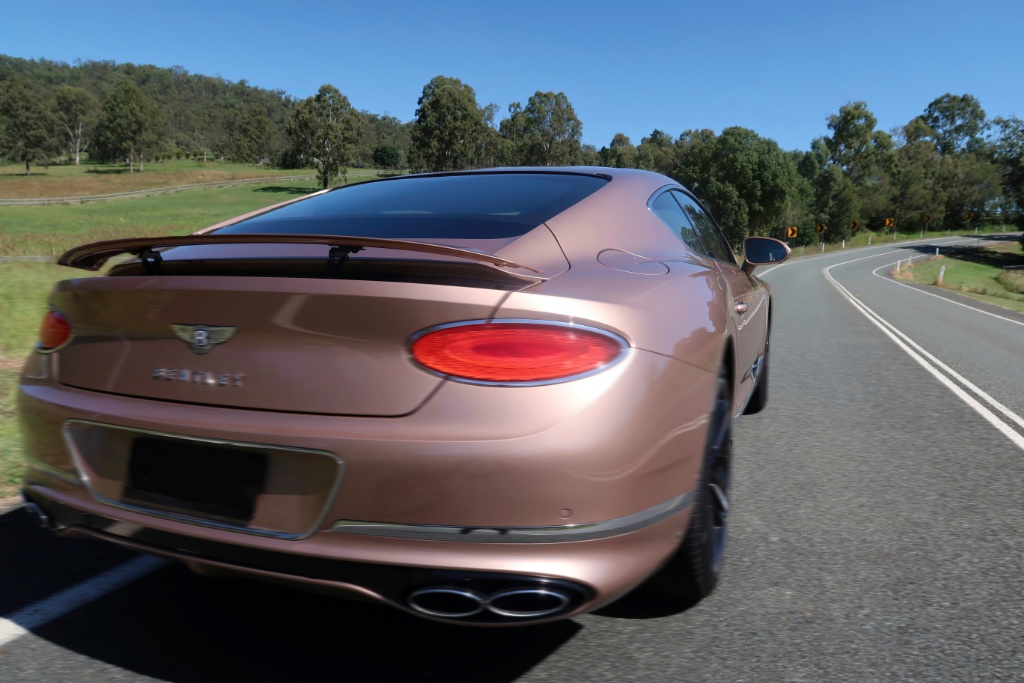 Using ‘Sport’ mode, the AWD Continental GT could dive into the apex and transition smoothly, appearing to follow an invisible rail track around the corner, as I poured on the power for the next lateral challenge.

BTW, this has got to be the most acceptable and accommodating ‘SPORT’ mode I’ve sampled to date. Of course, everything is sharper with this setting, but it’s not kidney-crunching, only stiff enough to make control more confidence-boosting.

As this is not intended to be a full ‘road test’ I won’t bother with performance data – since it’s more than competent, and using a stopwatch is just not worth the effort. 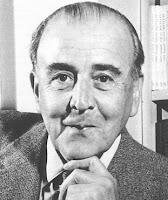 Handing the Continental GT V8 back to its owners, I realised the preceding 48 hours had successfully rekindled my love affair with what was the first of the building blocks which resulted in the re-writing of Bentley’s history to reflect a brand which does not waver from W.O. Bentley’s memorable aim to “build a good car, a fast car, the best in its class.”

Posted by John Crawford at 4:19 PM