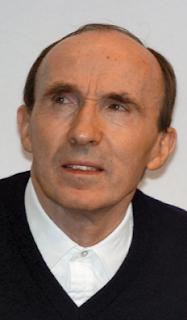 The world of Formula One is farewelling a racer, a fighter, a motor racing titan, a memorable figure in a larger-than-life world.

Frank Williams started from nothing and with outstandingly strong support from his wife Ginny he built a racing empire, producing cars which proudly carried his name, and was a pacesetter in a highly technical environment.

Frank’s history and accomplishments are well documented, and he’s a success story Britain can be proud of. Just the way he bounced back after his terrible car crash in March 1986 is a testament to his determination and perseverance.

However, my very good friend Peter Windsor (a lifelong friend and colleague of Frank’s) was the unfortunate passenger in the rented Ford Sierra, which left the road in driving rain, and as he has said in writing about the incident, it could have ended far better had Frank Williams been wearing a seat belt.

Which adds a slightly different condition, that could see perseverance replaced by the word, perverse. Frank was, like many successful men, very volatile, unpredictable, and, perverse.

Why did he fire Damon Hill at the end of the year he clinched the world drivers’ championship? Hill said in an interview: “The way I looked at it, if I want to keep my drive then I have to win. But if I couldn't keep my drive even if I won, that seemed really bizarre to me.”

Also, why did Frank fail to stop Nigel Mansell from leaving to go to Ferrari, when he too had been a world champion driving a Williams?

Many of those close to the sport, and the Williams equipe have voiced a common observation – Frank thought drivers, however talented, were expendable and replaceable.

There have been other close, and introspective analyses of Frank Williams’ life. His wife Ginny’s quasi-cathartic book ‘A Different Kind of Life’ (written after Frank’s horrific accident) tells of a man who was extremely self-centred, almost ignorant of the changes to his relationship with his wife, who admitted she wrote the book to tell Frank how she felt – simply because he never bothered to ask her. Ginny died of cancer in 2013. 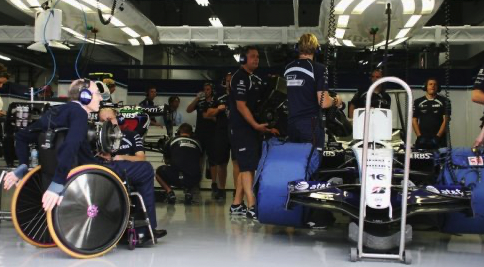 A film, simply titled WILLIAMS, and approved by Claire Williams was created in 2017 by the BAFTA-winning director, Morgan Matthews and also shed a none-too favourable light on Frank’s complex personality.

However, none of this should surprise anyone who has spent time with, or been associated with, highly-successful and driven businessmen. In fact, when thinking about Frank, the word obsessive seems more than appropriate.

This supports my lifelong theory about the Yin and Yang aspects of peoples’ personalities. Some of the very successful personalities I have known well, and been around have proved to be very unpleasant at times, but they simply did whatever was needed ‘to win’. 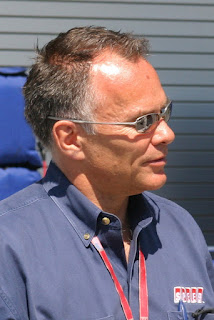 Peter Windsor however has emphasised the qualities of integrity and ethics, which he said Frank made clear to Windsor in 1985 when he joined Williams to manage sponsorships.

A seasoned automotive industry executive, whom I know, who joined Williams following the accident found Frank was more mellow, but still powered by his massive ego, which more than likely was the key to his determined ability to face the challenges of becoming a tetraplegic. 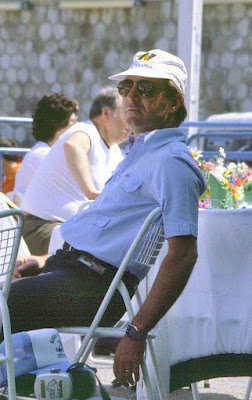 I was there courtesy of the fact I was PR Director for Leyland Australia, and that season Leyland’s truck, bus and tractor division, Leyland Vehicles, was the primary sponsor of the Williams team.

It was probably the most enjoyable Grand Prix I have ever attended - enjoying the repartee, the jokes and getting the inside scoop on planning, strategy, tyre choices and tactics. 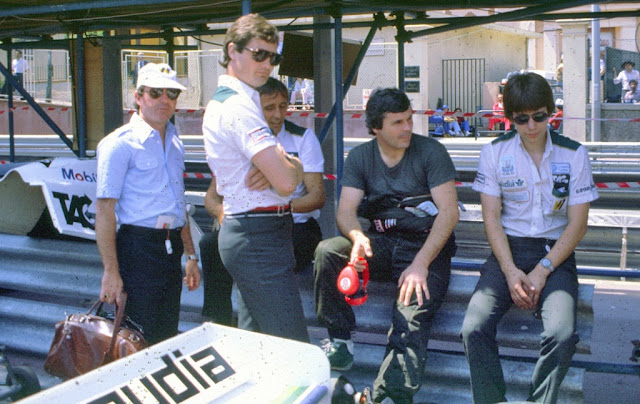 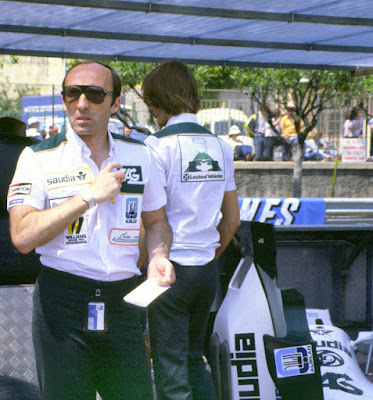 However, thanks to an ‘Access All Areas’ pass arranged by my friend Alan Jones, I spent the whole weekend with the team, in the paddock and pits.

I also attended a sponsor's dinner on the Saturday evening before the race, attended by Frank, his partner Patrick Head, and the drivers.

Pre-race sponsors' dinners are usually avoided by the team, who have much more serious concerns, but Frank, Patrick and the drivers were in good form, and I can now see why Reutemann went on to become a successful politician in Argentina - he was 'cool', jovial and very smart at gauging peoples' attitude, temperament and reactions. 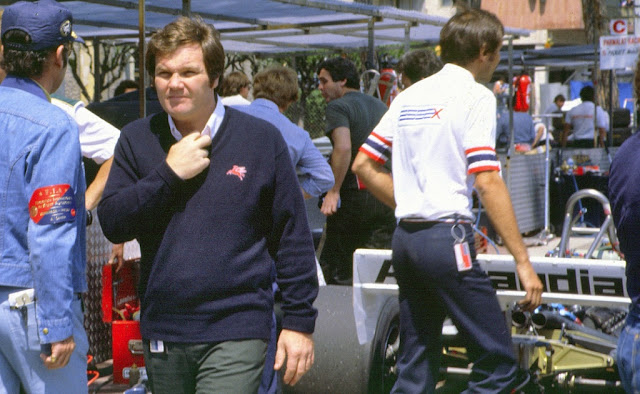 I had quite a few opportunities for one-on-one discussions with Frank, and was in the paddock during many meetings he had with the drivers, Patrick Head (right), and the team. 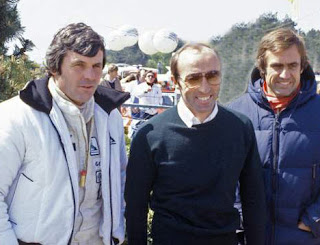 It was a successful event up until the late stages of the race, when Alan Jones was forced to pit with a faulty fuel pump.

Jones stuck to the tail of polesitter Piquet like glue, and I was snapping photos at Mirabeau, when Jones harried Piquet enough for him to go just slightly off-line on the approach, and AJ dived through the gap to take over the lead. 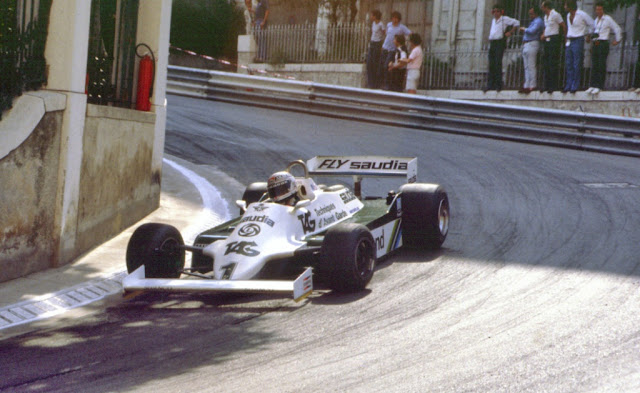 Shortly after Piquet’s name disappeared from the score sheets, and Jones left the field way behind as he stamped his authority on the race.

The result was a disappointment for Williams. Jones had been running so far ahead of the field in the latter stages, until his fuel pump caused a late pit stop, allowing Villeneuve to take the win, with Jones finishing second.

By the time the race ended I was back in the pits hovering around Williams and Head. Although Frank knew the fuel pump was a component issue, he still delivered some not-so-choice words to the world champion, telling him he had been taking it too easy, which robbed the team of enough time to get him back on track before Villeneuve blasted past him.

I went back with AJ to his hotel, who was, understandably, not happy to be criticised by the team owner after the immense physical and mental challenge of competing at Monaco, and the whole affair may well have been a pre-cursor to Jones’ decision to retire at the end of 1981.

Victory is sweet, and flowing champagne can disguise a lot of under current turbulence, but there’s no denying the fact that Frank Williams was a Formula One icon, and a great achiever.

The team won nine constructors’ titles and seven driving championships, but the financial pressures caused by poor track performance, exacerbated by the impact of the COVID pandemic, and the loss of its major sponsor eventually forced the family to relinquish control. 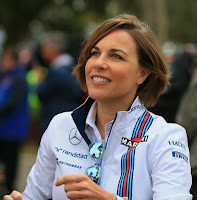 So the dedicated and fiercely-loyal Claire Williams agreed to sell the Williams team to Dorilton Capital for USD$266 million, so that, in her words: “Dad would come out of all this with something of value, because in all those years he never took money out of the team.”

Another chapter in the Formula One archives has closed, but the name and image of Frank Williams will be remembered for the fighter he was. 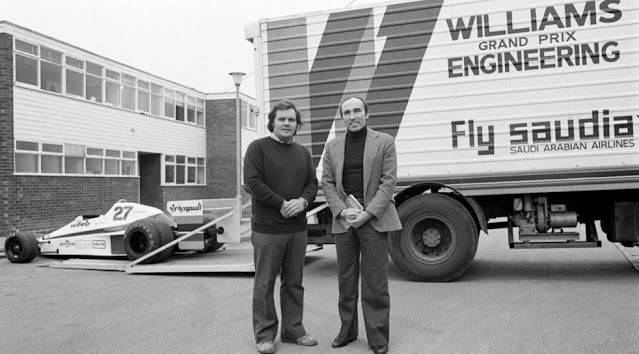