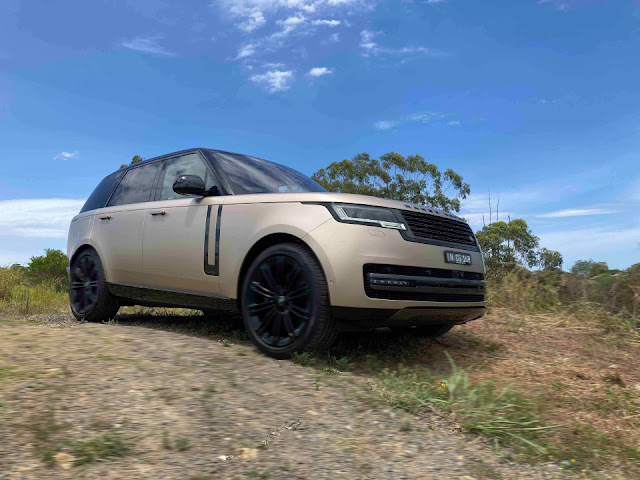 Would you push your $300,000+ Range Rover into off-road territory? Really? I mean this latest version looks a lot like a Louis Vuitton carry-all on wheels – too plush to mix it in creeks, rivers and streams on the back 40.

But, of course you could! After all it’s a product of the venerable Land Rover company and this smooth-lookin’ monster won’t falter at the first challenge. Loaded with all the dynamic capability we’ve come to expect from a Range Rover since 1969 – long spring travel, brilliant axle articulation, low-low transmission speeds, plus a diff lock and huge off-road tyres it’s just as unbeatable in the bush as its impressive forebears. 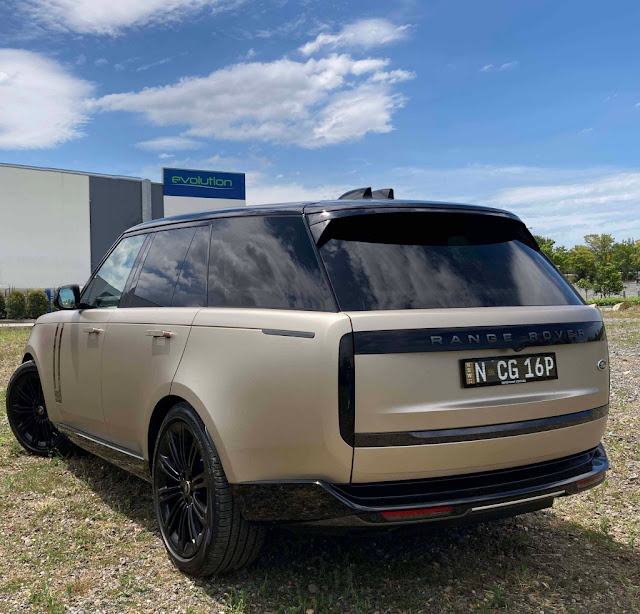 This evolution of the Range Rover image shows that the JLR management clearly understand the brand, its reach and its potential. It’s a great pity its Jaguar sibling has not enjoyed a similar quality of management, vision and expertise.

Mind you, the Range Rover I was fortunate to drive looked like it had just emerged from fording a mud pond, and the mud remained  to coat the surface – but, no! Matt paint finishes are all the rage, so with a company as fashion-conscious as it is serious about off-road performance, you’d expect Land Rover to match the moment.

My first exposure, before any bush-bashing, was a freeway run down the M1 motorway from Brisbane, and despite its hulk, the 2023 Range Rover is all about comfort and quiet – so quiet in fact there’s just the merest hint of wind rustling around the rear view mirrors. 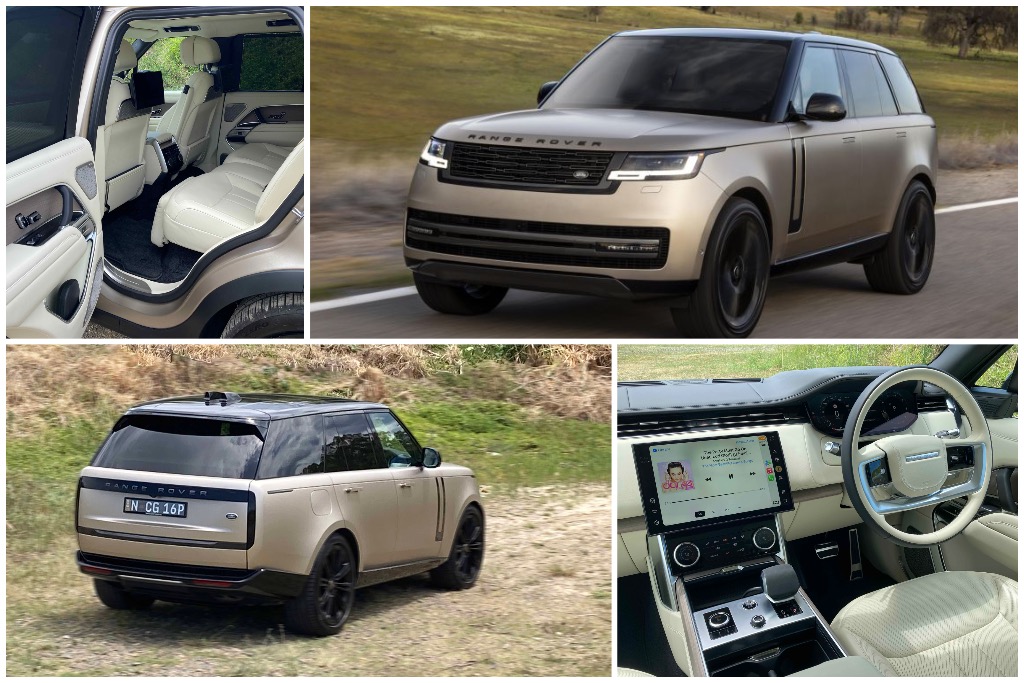 The ride is outstanding thanks to the brilliantly-evolved air suspension, active ride control  and expensive dampers. It really is magic carpet stuff and heading off on a Brisbane to Sydney trip would leave you without any concerns to disturb your comfort.

Okay, so the latest Range Rover has got the goods, and is at least the equal, if not better, than its major competitors, but, oh! That price. And this is not even the most expensive! 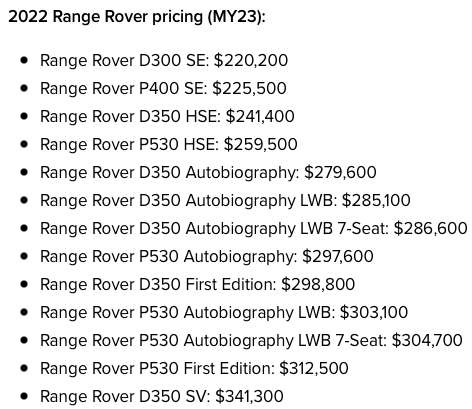 Someone has been whispering in the Tata accountants’ ears that the potential buyers won’t batt an eyelid at the eye-watering prices. For the sake of the ROI Tata needs to make on its overheads I certainly hope so. Take a look at this bewildering price list.

Yes, there’s something for everyone, but as one of my friends at Road & Track commented, you still get the full on Range Rover experience with the base model! Which means, when you're paying close to AUD$300K for the car I drove, you expect a lot more. It delivers.

This experience however focussed me on the long association I have had with this outstanding SUV. I first came across a Range Rover in 1976, shortly after Leyland Australia took its first deliveries.

Of course, it was preceded by its stellar reputation from the British car mags, and the general ‘buzz’. At the time I was editor of MODERN MOTOR, but I was just as impressed as my British colleagues.

It would be another 12 months before I was appointed PR Manager for Leyland Australia, responsible for convincing the press that the vehicle lived up to the hype, however, it was another six months before I could cajole the Sales & Marketing department, to reserve one as a press car.

It also turned out that I had some history with the car that was allocated to the PR Department. You’ll probably not be surprised that every Range Rover that came off a boat was whisked through its pre-delivery and in the hands of its new owner PDQ.

So, imagine my surprise when the Sales & Marketing Director told me the VIN number of the car allocated for press use. Not only had a I seen the car before, but it was ‘secondhand’!

Here is a photo of my ‘new’ press car in September 1977. Parked under a tree near the Giles Weather Station in the Northern Territory, it was crewed  by a three man Leyland Australia tech team assigned to support the Mini-Moke which Hans Tholstrup and I were driving in the 1977 Singapore Airlines London-to-Sydney Car Rally! 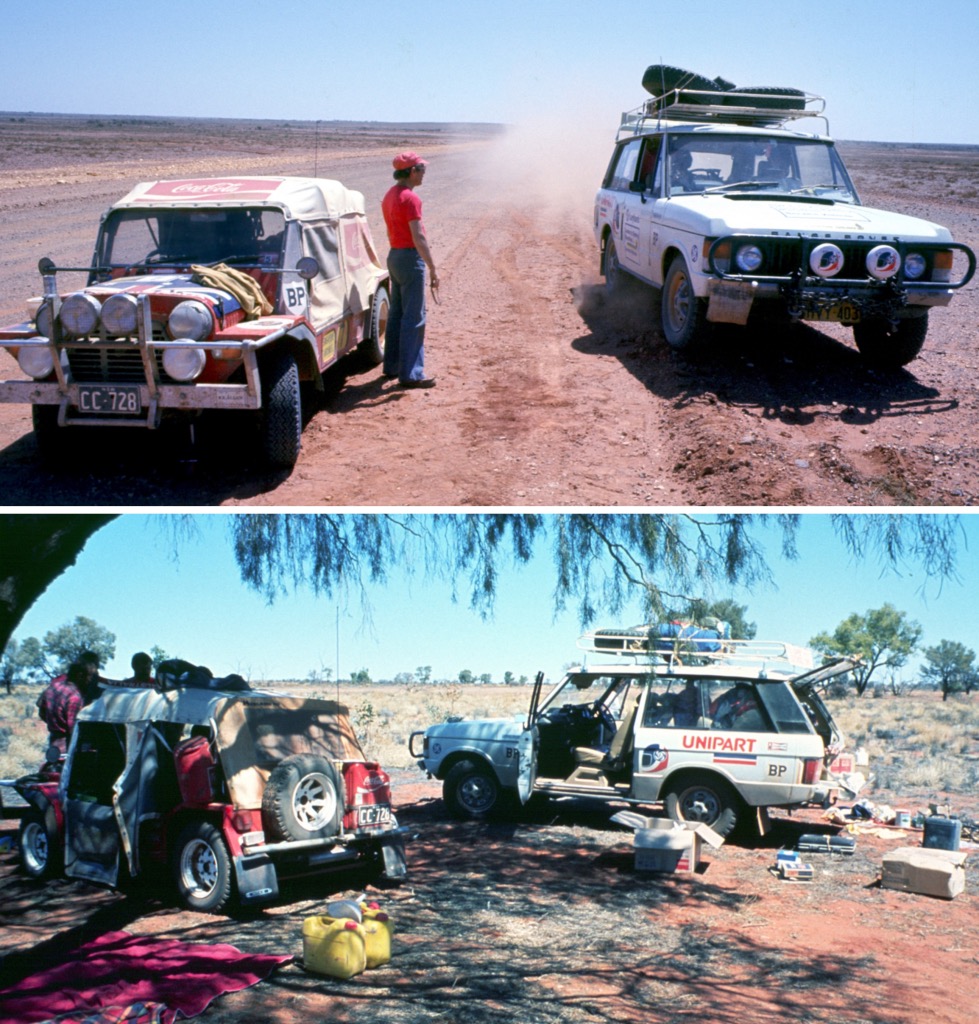 It was supposed to be a routine service stop, but we discovered the Moke needed a new front tie rod, so my view of the Range Rover was somewhat truncated, as I spread out my sleeping bag under the trees to catch forty winks. Tiring stuff these rallies! 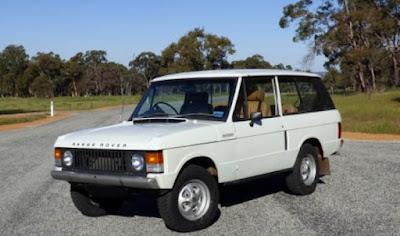 After the trip to the outback, the NSW service department ordered a full and meticulous detailing of that same Range Rover and delivered it to me with some ceremony.

Thrilled to finally have a Range Rover press car I never questioned its provenance.

That Range Rover eventually clocked up more than 120,000km as a press car before it was replaced by two new cars. It was only then that I found out where I had seen it before. 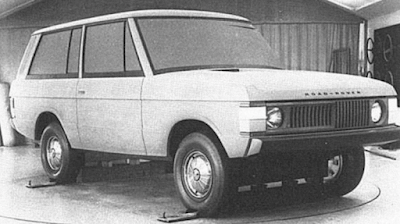 The Range Rover started as a dream by brothers Spencer and Maurice Wilks and their nephew, the great, late Spen King.

Beginning with the go-anywhere skills of the original Land Rover, they wanted a car that farmers could use for farmwork, yet clean up and take the wife to a theatre performance or a day at the races. History tells us that not only was the dream realised, but look at where we’ve arrived today.

A $322,000 workhorse, with the style and panache of some exclusive Louis Vuitton luggage. 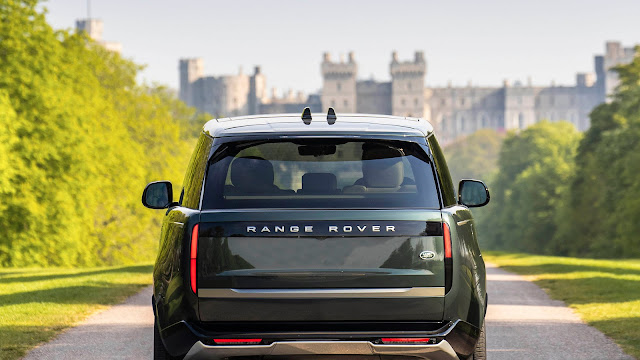 PS: Since picking up this car, I have received accurate pricing information from Jaguar Land Rover. The car you see here is a 'First Edition' model, and the base price is AUD$321,875 - however, with all the extra features loaded on to the base pricing, the retail price has been hiked to: AUD$332,525! Yikes! I'm glad I was respectful during my short off-road exploration.
JOHN CRAWFORD
Posted by John Crawford at 9:30 AM