Okay, there are three ways to start this story:

I’ve created that list because frankly, I didn't know where to start. All three are valid headlines, I just couldn’t make a coherent choice to start the train of thought, which is supposed to run through every story. So, come along for the ride. 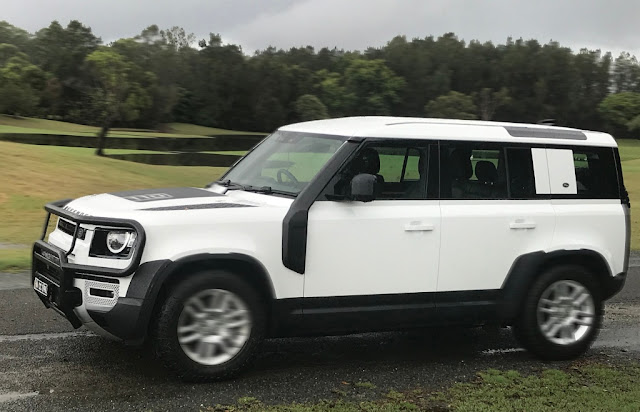 For the purists, let’s get one thing straight. The new Defender was NEVER going to be anything like the iconic 1949 version dreamed up by the Wilks Brothers.
Bare bones, simple construction, basic driving controls, and slab-sided styling.
A car which you could stand in the middle of the lawn and hose out the mud – and because most of the construction was aluminium, it wouldn’t rust! 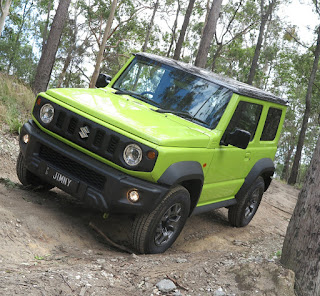 Sorry, but there isn’t a single carmaker which could offer such a vehicle today – simply because design rules, crash performance, obstacle avoidance, pedestrian protection, plus electronics (to make up for deficiencies in driving skill), simply wouldn’t allow it. There’s maybe just ONE which you could liken to a ‘bare-bones’ Defender, and that’s the outstanding Suzuki Jimny.

So, Land Rover didn’t really face a challenge when it was forced to replace its iconic 4WD. It just had to come up with something different, but equally competent, and able to comply with every legal and humanitarian demand made on today’s vehicles.

However, we should have seen this coming after designer Gerry McGovern released both sketches and real vehicles as part of the DC100 concept program in 2011. 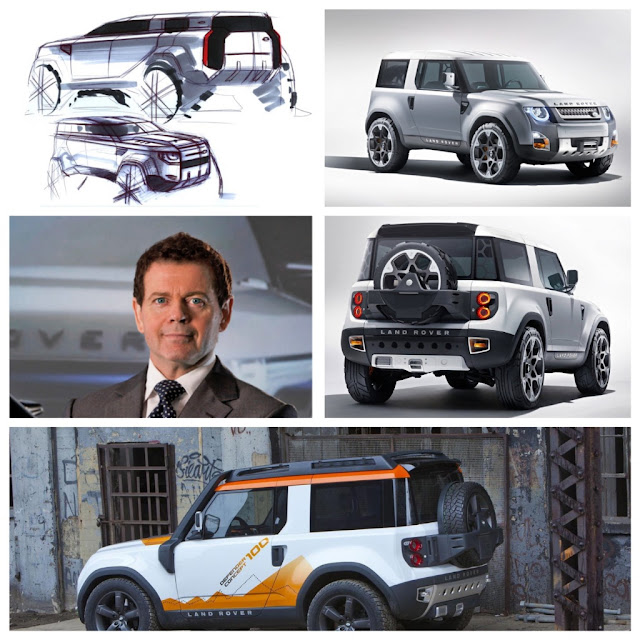 Okay, so we maybe don’t have a vehicle where you would want to hose out the interior, but what the company has come up with would make the Wilks brothers, and my dear friend, the late Spen King, enormously proud.

Because I had not had an opportunity to drive the new Defender, on October 6, I ran a story from my good friend, Damien Reid, about his participation in the Middle East launch event in and around Dubai. I think his wrap-up pretty much covered the vehicle and its capabilities. However, I was still keen to drive Defender, if only to answer the questions in my own mind, which resulted in the list at the top of the page.

If the new Defender is NOTHING like the original, then what is it? The simplest, and most generalised description, I could concoct was that it’s a workmanlike, but quirky Range Rover. I say that because it has a very stylish exterior; very comfortable and plush interior and of course it has the off-road competency you expect with every product from Land Rover. 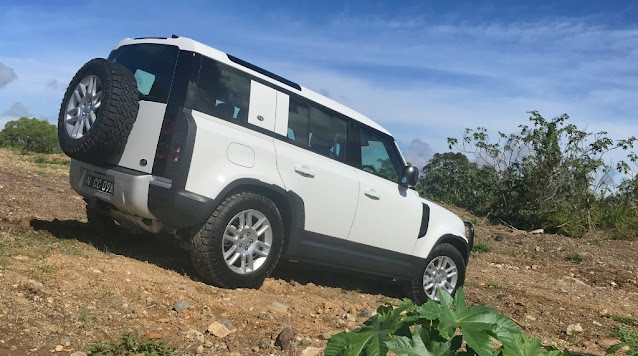 All of those qualities can be associated with Range Rover, which is often ridiculed these days as transport for Sloane Rangers and global poseurs.  However, for the less than 10% that ever take a Range Rover off-road, it is also the most competent and comfortable high-end 4WD ever produced.

So here we go. The first part of the acclimatisation is the freeway run from Brisbane to the Gold Coast. Thoughts? It’s just like driving a Range Rover – quiet, a comfortable ride and well-calibrated responses from the powertrain. Easy-peasy – passed with flying colours , especially if all you’ll do is use it for the school run – and maybe weekend picnics.

Not far from my Gold Coast HQ is a very rough and challenging plot of land being prepared by a developer (who basically thinks I’m crazy when I turn up with a 4WD). We have just endured extremely heavy rain (La Nina, I’m told), and consequently the patch of land is simply mud up to your eyeballs. 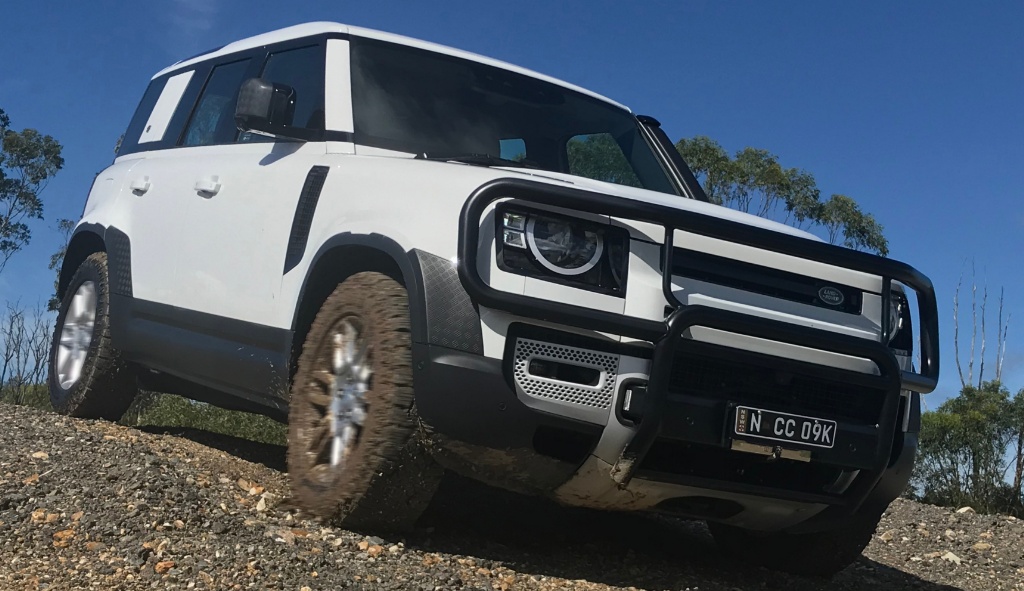 I was really keen to utilise the ‘Ruts and Mud’ setting on the suspension, so I bravely sallied forth. The mud was DEEP, but Defender just got on with the job. Progress through a sea of mud was amazing, although it did leave a big clean-up for my mate Dennis Huxtable at the dealership, when I returned the originally-pristine Defender.

Okay, it’s very competent in the rough stuff, just like its iconic predecessor, so let’s move on to ‘Design’ – not a term I would have attributed to the previous Defender. Despite ‘tart-ups’, Land Rover never really departed from the basic shape of the 90 and 110.

Internal sources have said that after the reveal of the DC100 concept program, the JLR Board told Gerry McGovern: “This is a challenge which will have huge impact on Land Rover, don’t fuck it up!”

In the end McGovern and his team, have created something which inspires confidence; satisfies the demands of common sense; and is informed by quite elegant reminders of Defender’s utilitarian role in owners' lives.

At times it’s a touch clichéd, and a bit too cute in some areas, but both exterior and interior designers have obviously been given their head, and they’ve delivered a vehicle which provides a rich mix of comfort, practicality, useful storage, and clever ‘quirky’ cosmetic touches. 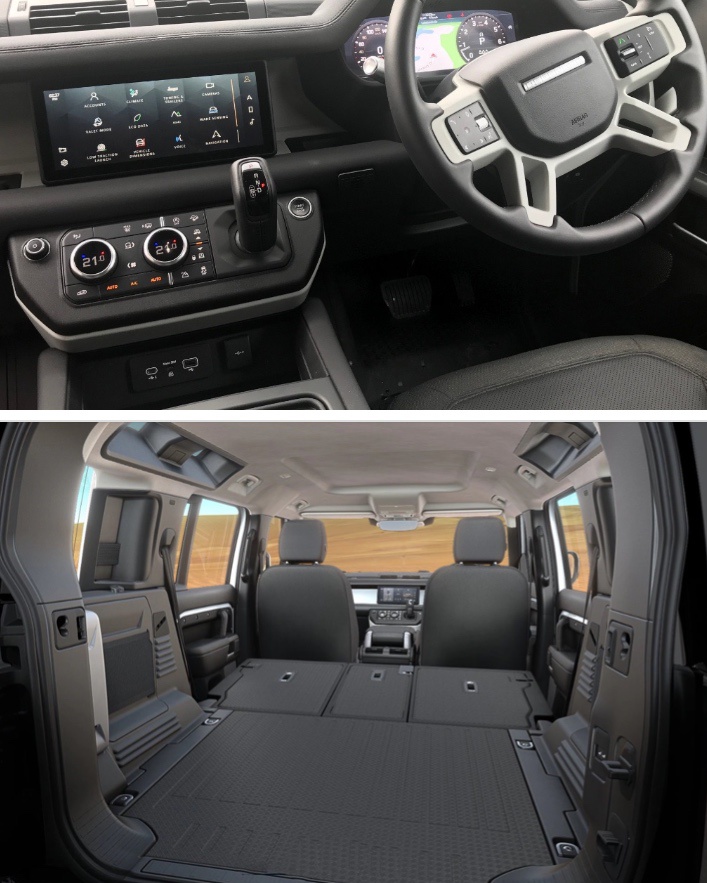 In short – I like what they’ve done. As opposed to Range Rover which has evolved from a stiff and serious upright design, to a smoother, sleeker intention. Defender is what I would call, chunky practicality, and it's 'original'!

Now, to performance. First, look under the hood at the new in-line six-cylinder engine created from the Ingenium modular four-cylinder engines offered in both Jaguars and Land Rovers.

JLR has adopted the same technique as BMW, that is, each cylinder measures 500cc - so, you just keep adding 'modules'.

However, there’s nothing to see under the hood representing an engine. Tucked away at the rear of the engine bay, wearing the now-usual plastic ‘hat’, it's surrounded by a huge variety of components hanging off it!

But, this time around we have a brand-new, and brilliant, in-line six-cylinder engine that is as sweet as any engine I’ve experienced from the Masters (of in-line sixes) Mercedes-Benz and BMW. In fact, ‘sweet’ doesn’t do this engine enough justice. It uses an electrically-powered supercharger, plus twin-scroll turbochargers to deliver power whenever you want it – smooth, linear and quiet.

It’s the same process employed by VW with the original Golf 1.4L TSi. It had a supercharger, to give it ‘off-the-line’ push, then it switched over to a twin-scroll turbocharger to continue the ‘shove’.

It was brilliant (devised by Ferdinand Piech himself), but eventually abandoned as too expensive for a car in the Golf price-bracket.

In this example, the new six-cylinder Ingenium engine delivers – smooth, linear performance - and it's quiet!

I can’t imagine why you would choose anything else on the order form.

In summary, the new Defender delivers on all fronts. Performance, terrain management, overall competence, comfort, and quality-of-driving experience. In addition I have to the say the quality of the interior finishes; the trim margins; choice of materials and outstanding fit and finish are all benchmark world class.

As far as I’m concerned all its competitors are ‘pretenders’ – forget about your Jeeps, RAMS, G-wagons and BMW X3/X5s – the Defender has them beaten on all fronts.

Keep this in mind when you want Range Rover comfort, plus old-time Defender performance.

However, there’s a ‘but’. All this comes at a price. The vehicle in this Post comes at an almost eye-watering pricetag of $118,000!

But, you get what you pay for. A brilliantly competent and highly competitive 4WD off-road vehicle, comfort, quality, and practicality. You decide.

But, it’s worth pointing out that among its Aussie competitors, it’s less expensive than the current 200 series Toyota Sahara Landcruiser – and probably twice the vehicle – in every sense.

Relating all of this back to the 1949 original, Land Rover has delivered – again, in spades. 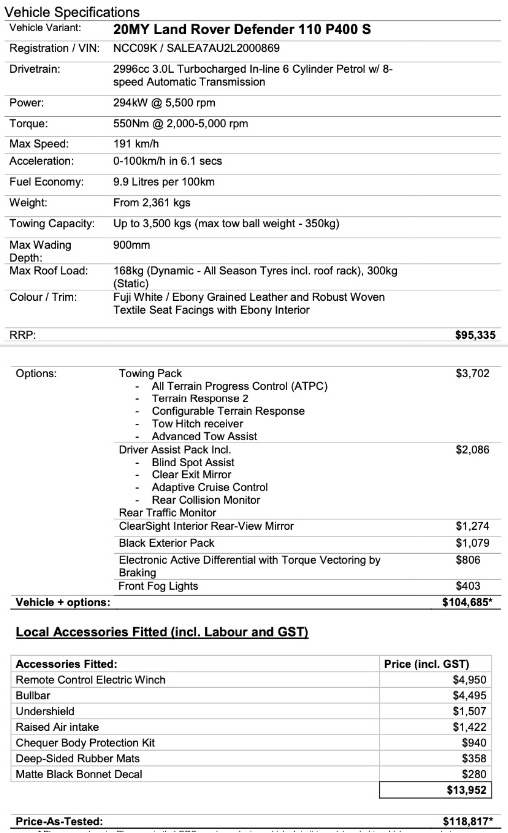