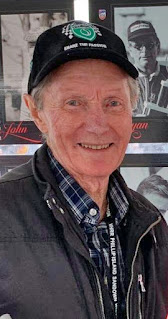 I didn’t know John Harvey well, but well enough to say we were friends.
I’d met him a few times after he transitioned from a championship career in Speedway to great success in circuit racing driving open wheelers, sports and touring cars, but I guess our ‘friendship’ began after we spent 20 minutes on the pit wall at Sandown Park once, just chatting about ‘stuff’.
From that point on it was always “G’day Harves” and “Hi JC”. 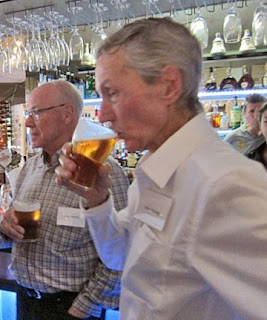 After I spent more than a dozen years living overseas, we didn’t see much of each other, until we re-connected at the inaugural ‘Legends Lunch’, organised by Aussie motor racing icon Ian Maudsley in 2016.
I managed to grab a blurry photo of him enjoying a beer with one of his best mates, Allan Moffatt. 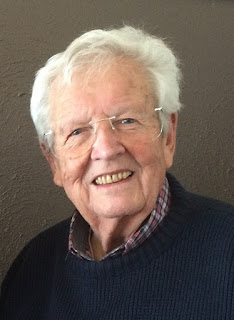 So I asked my friend, Leo Pruneau, former Design Director for GM Holden, to contribute a few words about the man he also called ‘Harves’, and their close connection over the years:

“Terribly sorry to learn of John Harvey’s passing and my sympathy is with Bev and their family.

“Harves and I have been friends, colleagues and associates for over 45 years.  I first got to know John during the very early days of the Holden Racing Team.  He was a brilliant, champion racing car driver whom we all called, in the very best Australian vernacular, “Slug”…

“Also, John was a Holden ‘true believer’ and any time there was a problem arising between GM Holden and the racing team, John was the ‘steadier’, who kept things on the rails through thick and through thin.

“After finishing up at Holden’s in 1983, I returned to the GM Design Studios in Detroit.  It was during this period that General Motors and Hughes Aircraft decided, for publicity purposes, to invest USD$2 million designing and building a solar powered car to compete in the inaugural 1987 Australian solar car race over 3000km from Darwin to Adelaide.

“As I had some involvement (through Holden and Hans Tholstrup) in the very first solar car race activities, I was approached by the Hughes Aircraft representative involved with the development of the “Sunraycer” asking did I know anyone in Australia who could drive the car in the race? I had no hesitation in recommending John Harvey and Larry Perkins as drivers.

“Before the “Sunraycer” project had finished, John visited GM in Detroit, and while at the General Motors Technical Centre I had the pleasure to show John through the GM Styling Studios, a privilege rarely offered to others.

“John was a gentleman and special friend.”

John Harvey was a ‘good man’ and he will be missed by family, friends and fans alike. RIP Harves.

Posted by John Crawford at 8:58 AM