There are several threads to this story.
First, and truly foremost I must start with this:
1997 Suzuki Baleno wagon, in beautiful condition, on sale at the major Australian car trading website, CarSales.com.au, for AUD$3490! 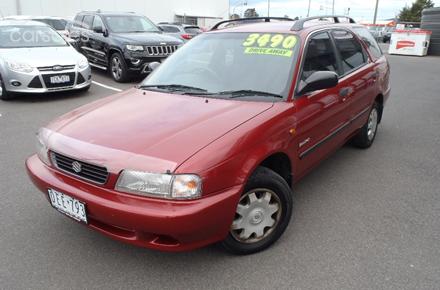 So what, you say? Well, it has done over 127,000km and pretty much looks like it has just been delivered.

Okay, the one owner has done a great job looking after it for nine years, but the fact that the motor trade suggests it’s worth almost $4K after all this time is a big endorsement of the quality reputation of Suzuki cars.

I have a great soft spot for this long-established Japanese company, and huge respect as well. A family business, founded in 1892 - by 2011 it was the world’s ninth biggest carmaker, with 45,000 employees worldwide and car plants in 23 countries. Yet, by Toyota standards, it’s still a minnow.

Not only does it make cars under its own name (plus motorcycles, ATVs, engines and outboard motors), it also has joint ventures with up to a dozen other global carmakers, producing Suzuki-based vehicles with OEM brand names. Companies like General Motors, FIAT, Mazda, Nissan and even Volkswagen have all knocked on Suzuki's door.

This speaks volumes for Suzuki’s image as a quality designer, developer and manufacturer of vehicles. In fact for such a small company its precision engineering credentials are impeccable.

One of Suzuki’s greatest success stories is its progress in India. Beginning with an import distribution deal in 1982, it now owns Maruti Suzuki, which has a 47% share of the huge Indian car market. 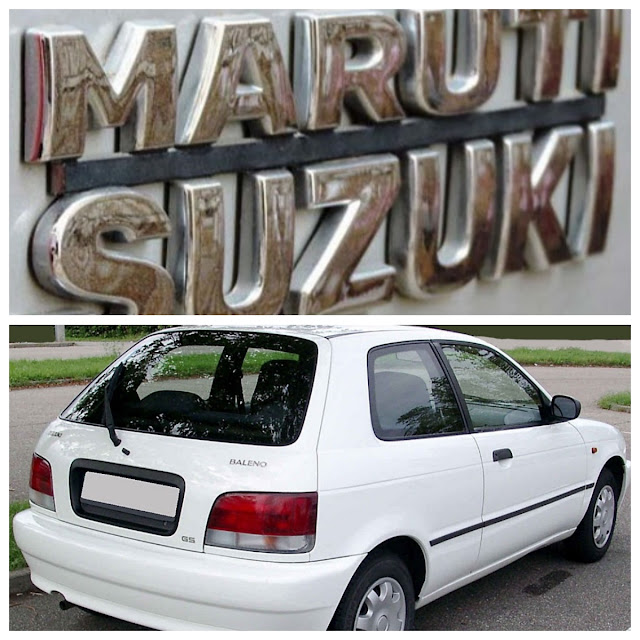 Back in 1995 Suzuki introduced the Cultus Crescent in Japan, and in 1999 moved production to India, renaming the car, Baleno.

Which brings us nicely back to the car we started with. This humble, Japanese-built ‘used car’ is great validation of Suzuki's reliability and durability.

The Baleno model name disappeared in 2002, but reappeared as a concept car at the Frankfurt Motor Show in 2015. It is now solely manufactured in India. 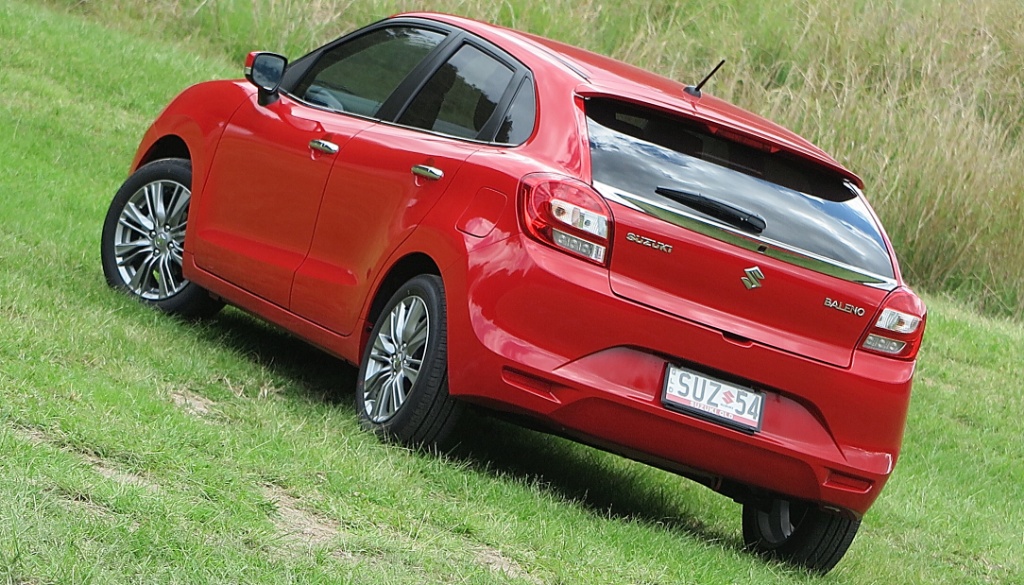 Just as Suzuki has reintroduced the Vitara SUV badge, Baleno now carries Suzuki’s presence in the sub-compact segment. Unlike the original Baleno (sold as a sedan, hatchback and wagon), the latest Baleno is only offered as a five-door hatch.

When news broke about this new Baleno I was very keen to drive it. After a very impressive introduction to the new Vitara, I wanted to see what Suzuki could pull off in this incredibly-competitive market segment.

And this really is Suzuki’s little, BIG story! 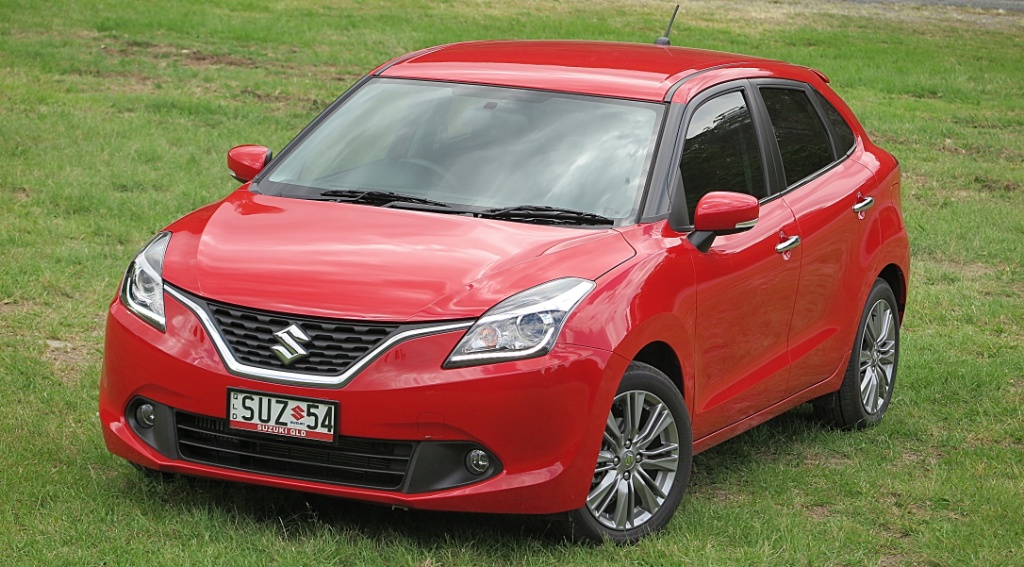 Small on the outside, but boasting truly impressive interior space, the new Baleno is a segment-buster. As others have said, it’s a Toyota Yaris on the outside and a Corolla on the inside. It is a very remarkable package.

There are two models – the GL and GL X; and with the driveaway price of the GL automatic at AUD$17,990 it’s going to be a market-buster as well!

After five minutes behind the wheel, the Baleno GL X reveals its great attractions. A jewel of an engine, just 1.0 litre, three cylinder, and turbocharged to produce 82kW (110 hp). It may sound modest, but the Baleno GL X only weighs 975kg – so the power to weight ratio is what delivers the verve and brio in this impressive small car. 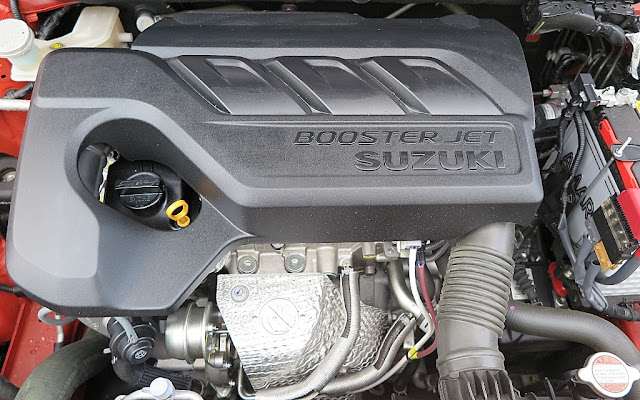 The test car features the outstanding Aisin (TF-73SC) 6-speed automatic transmission, which is well-calibrated to the BoosterJet engine.


Suzuki has been a big fan of three cylinder engines for a long time, and its 800cc version has powered a multitude of Suzuki and other brand name small cars over the last 40 years. 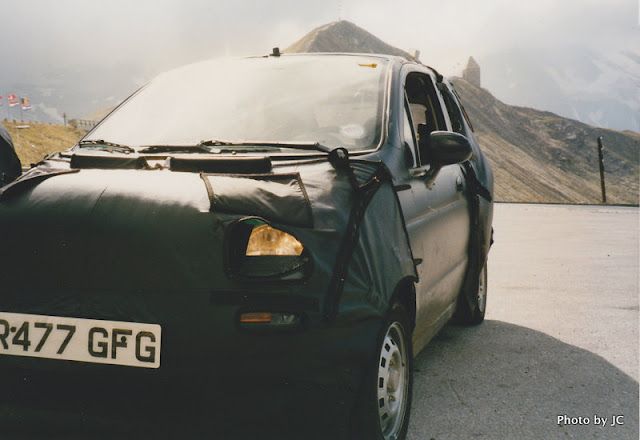 My own highlight was a two day testing exercise driving the Daewoo Matiz prototype in the Austrian Alps on the Grossglockner pass.

So far the fuel economy readout on the dash is still showing 5.0L/100km (again, like it’s painted on); but the reality-check in this performance joy scenario is that BoosterJet needs 95RON fuel – ouch! That’s expensive for an economy car!

Which, together with the price, makes the Baleno GL automatic fantastic value for money! Baleno GL X is priced at AUD$22,990 driveaway. 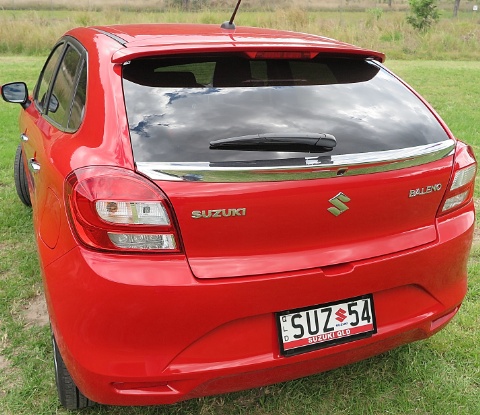 As you walk up to the GL X it’s not hard to be impressed with the initial visage of quality from the exterior fittings, not least being the chrome rear spoiler.

However, once the door is opened on the interior you become immediately aware of Suzuki’s Janus. 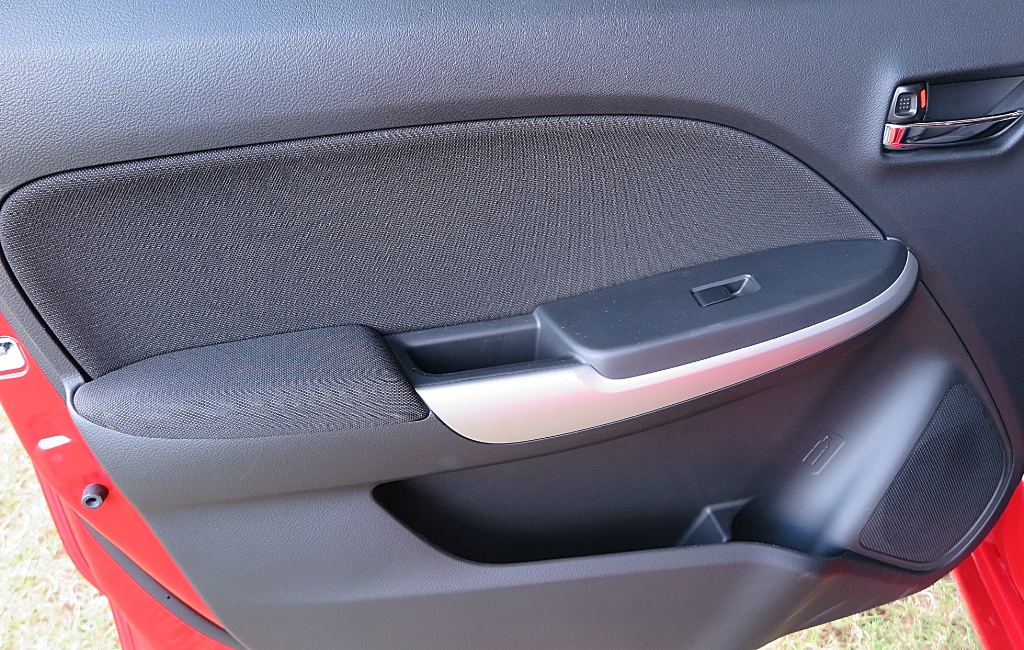 Yes, the plastics are hard, and they are also incredibly durable and long-lasting, but almost all Baleno’s competitors leave it for dead when comparing the touch and feel of interior composites.

I’m afraid the plastics just look cheap and brittle. It’s such a pity, because other areas of the Baleno’s interior are very attractive. The in-dash touchscreen controller is especially smart. 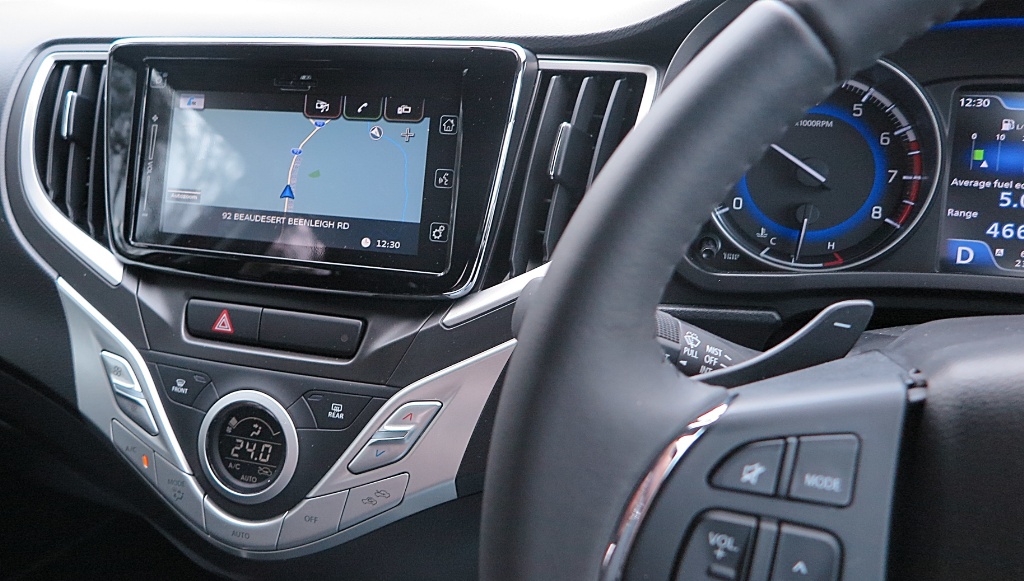 And, get this! You get SatNav as standard equipment (along with Bluetooth phone/iPod controls) in every Baleno model! Plus, Apple CarPlay! More great value! 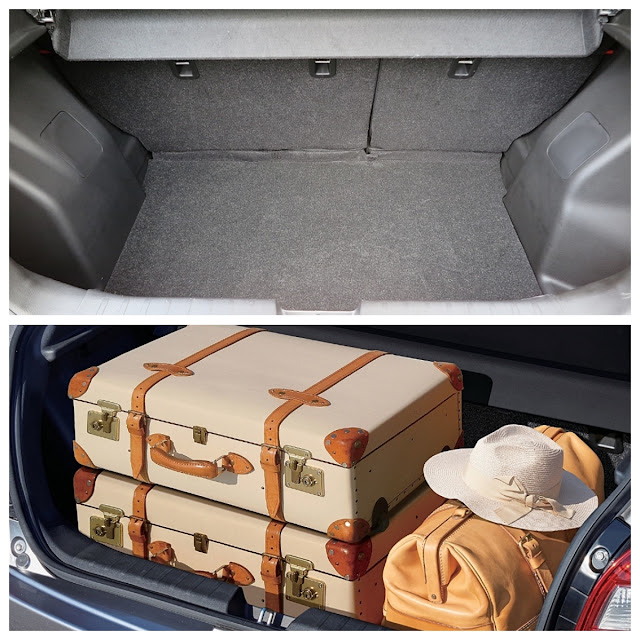 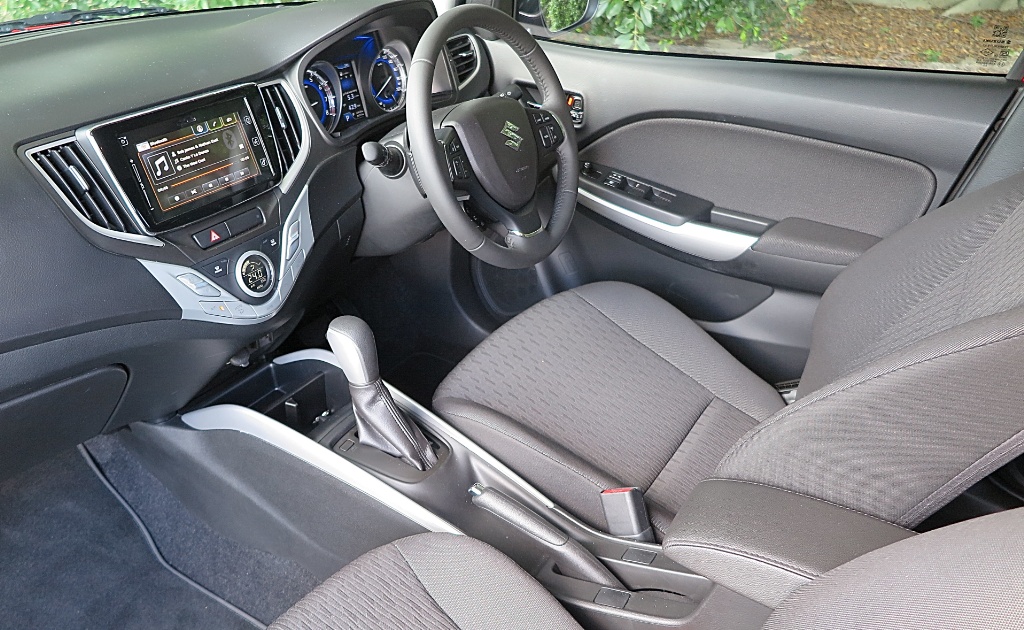 Both the primary and secondary ride are excellent, although maybe the compliance settings are a bit on the soft side. However, that’s not in conflict with the car’s intended purpose – it’s not advertised as a GT.

The steering response is precise - conventional rack and pinion, with electric assistance. Because of its compact size it's also easy to park. 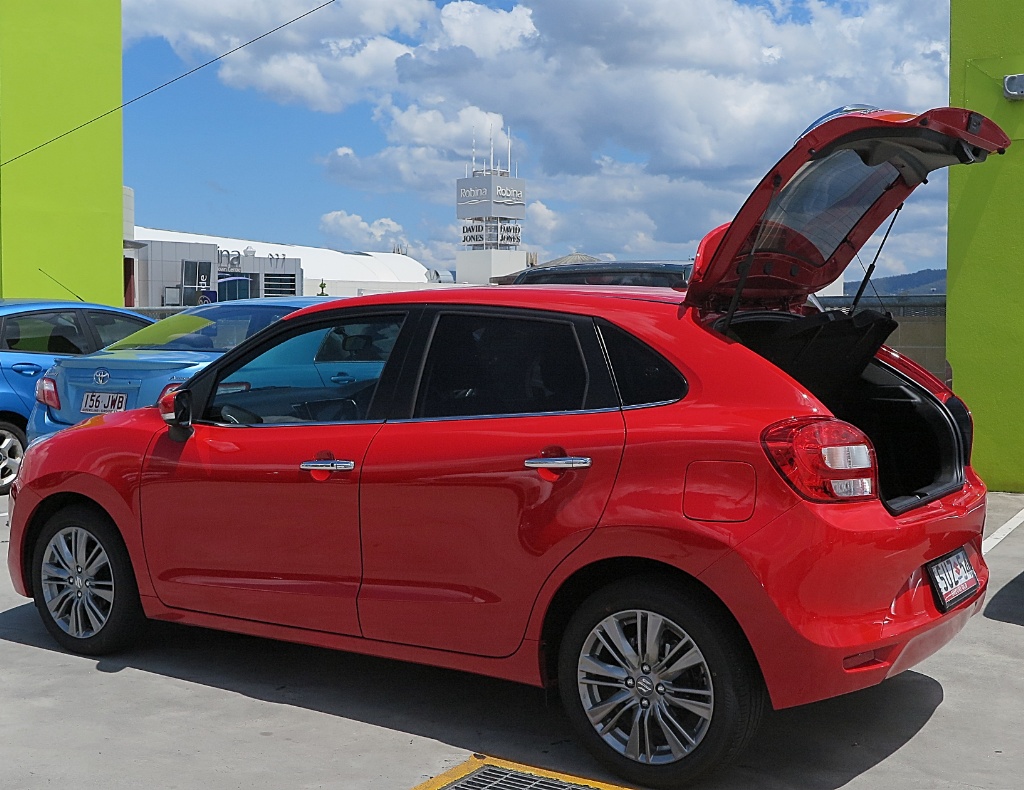 The result is that the Baleno ticks every box you can think of when comparing cars. It competes against Hyundai i30, Toyota Corolla and Mazda 3, but is priced like a supermini.

The equipment levels are excellent, the interior package exceptional, running costs are cost-effective (except for 95 RON fuel) and the durability and reliability are a given – because it’s designed and made by Suzuki.

What’s not to like? Good for the wallet, good to drive and you can feel very smug about a smart purchase decision that delivers genuine driving pleasure.

I hope Baleno’s competitors are paying attention.
Posted by John Crawford at 12:31 PM