Tom was born and bred in Motown, aka Detroit, in 1934 the son of Dutch immigrants. His father John designed the 1935 Lincoln Zephyr, so car design entered his thinking early on, and after leaving high school in Birmingham, MI, he studied architecture at University of Michigan.

Instead of designing a house for his thesis, he created a ‘sport station wagon’. The idea earned him an internship at Carrozzeria Ghia, so he moved to Italy in 1958. Alongside Ghia’s Sergio Sartorelli, Tom designed a huge number of cars, during his time at Ghia, but he moved on to Pininfarina in 1961.

In a career spanning 26 years, working with Italy’s major carrozzeria his body of work was an incredible list of more than 70 different cars. In addition he worked on parts of cars, interiors, and detailed exterior finishes.

Most people would be amazed at the huge number of Italian designs which came from the sketch pad of the boy from Detroit. 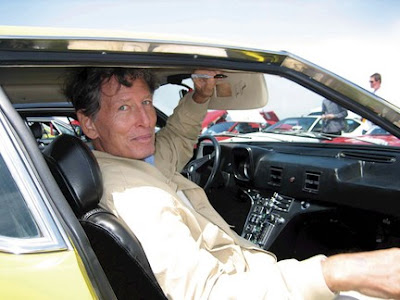 I first met him at Pebble Beach in 1992, and became good friends. He was a gentle soul, with huge design skill, but also down-to-earth, and very humble.

Definitely not a blowhard, and time spent with him at car shows, Italian car club meets, auto shows in Europe and the various American concours events was always fun, and educational. If he spotted me on the other side of the lawn he would shout, wave, and walk over.

Tom loved to share opinions, and also to ‘interview’ leading designers about why they created some specific design theme, or flourish. They all held him in high regard.

To show the wide variety of projects bearing Tom’s signature look at this lot:

Tom passed away in Turin on June 1, aged 82, a good innings. His skill, achievements, humour and humility will be missed. We've lost one of the ‘greats’.
Posted by John Crawford at 4:52 PM