Given Aston Martin’s serious current debt; sagging car sales; massive investments and the fact that, as far as market analysts are concerned, it’s a company that’s ‘on the nose’ - automotive observers and commentators are throwing out some very wild ideas about how Aston Martin could be saved, and by whom. 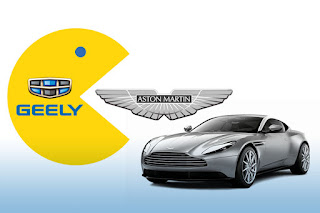 One of the companies that‘s top of many lists is China’s Zhejiang Geely, currently saviour and owner of Volvo, Lotus and Proton.
However, it might be time for a reality check. 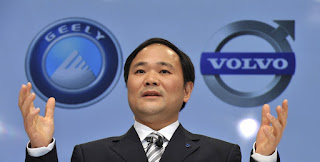 Its founder Li Shufu (left) is hailed as a god-like saviour to some famous brands.

Geely has done a great job rescuing Volvo, and helping Lotus climb back up the integrity ladder, but taking a major stake in Aston Martin, may be a step too far.

Car sales in China, the world’s largest car market, are tanking - and the competition to survive is getting stiffer.  The outlook is very grim. 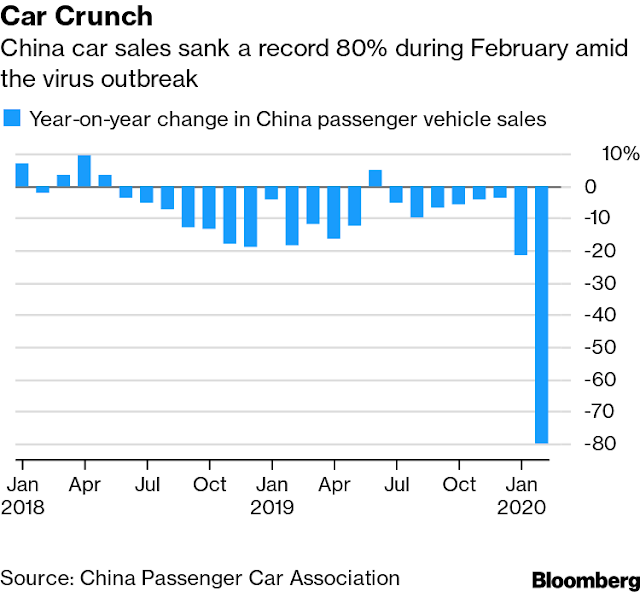 While new car buyers accounted for two-thirds of sales over the last five years, the next five will likely be driven by replacement demand, according to a Goldman Sachs Group Inc. forecast.

Geely has done better through the downturn by maintaining a fine balance between production, sales and inventory. But it has had to slash sales targets, moving further away from its goal of selling 2 million vehicles by the end of 2020. While Lynk & Co sales volumes rose, net profit fell. Research and development costs continue to climb.

However, Geely remains exposed to lower-tier cities in China, where demand has cratered. So, vanity buying is best saved for more upbeat times.

Investing in Aston Martin would be a cash sink, premium brand or not. Low as the price may be, a stake won’t add value to Li’s auto portfolio any time soon, given its debt burden, and a struggling core business. The Geely group should have other priorities, especially its finances.

On the subject of debt, let’s take a close look at Geely. Debt at Zhejiang Geely totalled 136 billion yuan (USD$19 billion) at the end of September 2019, up from 92 billion yuan a year earlier. 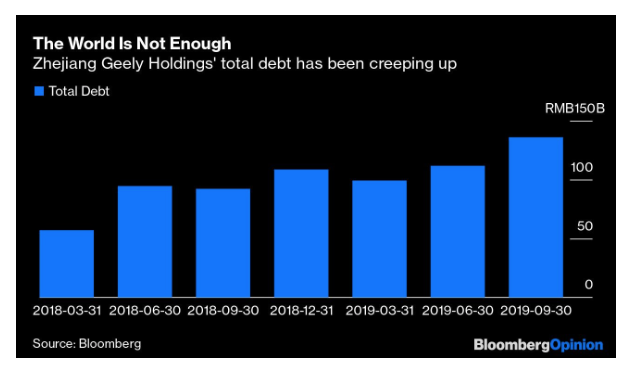 Previous stake purchases (Volvo/Lotus/Proton) have come with leverage. To buy its stake in Daimler, for instance, Geely took to using complex derivatives. Its ratio of net debt to earnings before interest, tax, depreciation and amortization rose to 1.4 times in 2018, from 0.6 times in 2017, according to S&P Global Intelligence, because it took on a fair amount of debt to fund the acquisition of its 8% stake in Volvo AB.

The credit rating agency estimated that the leverage ratio could rise further on lower sales and shrinking margins.

So despite Geely’s impressive aspirations, and the fine job it has done with the companies it now holds a stake in, I believe Geely is now finding itself in the same boat as a large number of global companies which have been hogging-out on cheap borrowings, at near record low interest rates.

Also, with Geely being mentioned in connection with helping to sustain Jaguar Land Rover, that would put increasing pressure on the Chinese giant.

Understanding debt and its relationship to success is not difficult. You borrow money (at low interest rates), based on a potential improvement in sales; cutting overheads; improving profit margins and efficient cash flow, based on increased sales. This is how a growing business expects these to be steps it takes, to improve its financial footprint. But everyone has to be reading from the same song sheet.

Screw up any one of those variables, and you’re in big trouble. Despite low interest rates on borrowings, maturing debt still has to be either paid off, or re-financed. If your cash flow suddenly sinks, and sales also fall, then paying off the debt, or re-financing becomes a huge impediment to survival – it’s that serious.

What the unitiated (in terms of global finance knowledge) should understand is that, taking these car companies as a giant group of potential borrowers, there is a limit to how much this group can borrow. There is neither a humungeous pot of money available, nor lenders with enough confidence to make loans in the current economic climate.

If the life lesson is, it's all about timing, then a shortage of funds to borrow couldn't come at a worse time for the car industry - which obviously tries to think years ahead.

As the impact of COVID19 changes the very nature of markets, it’s anyone’s guess as to how those companies are going to survive such a rapid and massive sales downturn.

Keeping everything moving in the right direction, like cash flow, and rolling along without impediment is getting harder and harder, as this virus stops factories, sales, and frustrates forecasting.

Of all the world’s global industries, the automotive industry may be in line for some of the biggest changes of all industries. It absolutely relies on replacement business – your car gets old; you replace it.

The cash keeps trickling down; but once the process hits a road block, it’s anyone’s guess how to restructure the centuries-old business model the automotive industry clings to.

Borrowing to keep it going is now a BIG gamble, and the reduction in the number of car companies which CAN remain afloat, is going to change the entire car business from designing, to making, to selling.

I’m glad I’m a spectator, not an investor.

NOTE: I relied on some data from Bloomberg to create a coherent explanation.

Posted by John Crawford at 9:48 AM