It’s nice to re-acquaint with old friends, especially those with whom you established a loving relationship. Such is my drive this week in the 2021 Aston Martin Vantage V8. 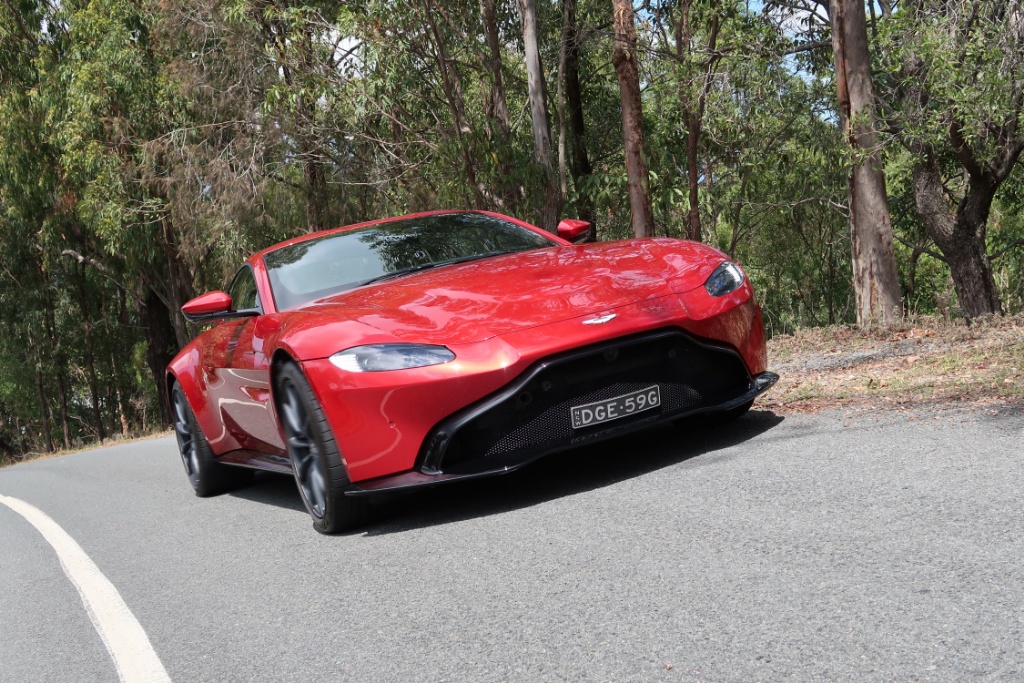 Despite the many years I spent helping to develop a ‘new’ image for Bentley, which was ably assisted by the launch of the Continental GT coupe in 2003, my heart belongs to Aston Martin.

For many reasons. I have enjoyed a long association with just about every sports car badge from Britain in the time since I earned my driving licence, in 1959. MGs, Austin Healeys, Sprites, various Lotii, TVR, Bristol, and then the step up to the big names, like Jaguar and Bentley.

However, Aston Martin burst into my life when my old friend Ing. Dr. Ulrich Bez was hired by Ford to try and sort out one of Britain’s oldest, and traditionally money-losing marques.

In 2004 Ulrich Bez revealed to me his plans for a car which could match the Porsche 911 in most dimensions – design, size, performance, handling and cachet. Tough challenge, given that Porsche has ‘owned’ the 911 market segment for as long as anyone can remember. 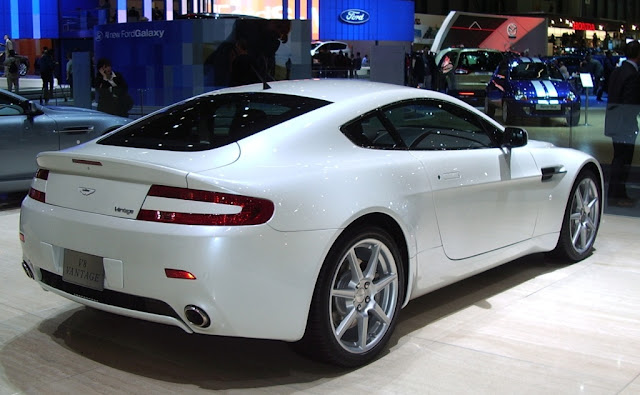 He said it was a no compromise car, just two seats, adequate luggage space, a V8 engine, and exemplary ride, handling and performance within the same limits as the 911. Knowing Porsche’s dominance of the segment, I wished him well.

Designer Henrik Fisker came up with a svelte, flowing shape, and Dr. Bez inspired the Aston Martin product engineering team to stretch their efforts to match the competition’s values.

My first drive of a Vantage on home soil was in 2007, shortly after I retired from Bentley. Given how Ulrich Bez had clearly outlined his challenges and his approach, I was thrilled with my 300km test drive. The car delivered on its promises, with serious pause over the quality of the interior, and some fit’n’finish issues on the exterior.

However, my own significant history in the motor industry tells me you achieve the best quality scores when producing in volume, with firmly established processes.

So, after a brief encounter with the Vantage in 2019, I am re-acquainted this week with the 2021 version, and I’m delighted to say that all is forgiven. 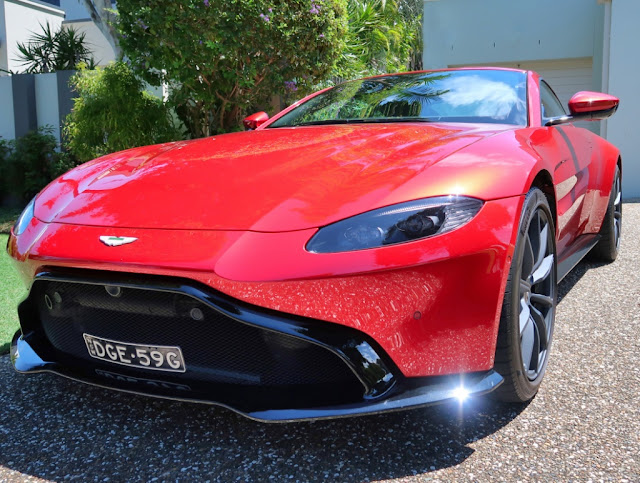 The interior materials and finish are exemplary, as is the external panel fit and paint quality. The seats hold this test driver perfectly (although I’m not sure anyone weighing in over 90kg will be really comfortable), and the instruments and controls (many borrowed from Daimler Benz) are ergonomically well-positioned, and intuitive in their operation. 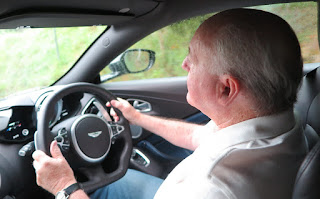 But, really, driving an Aston Martin is all about the experience. The experience of pushing a refined, sophisticated high performance sports car to its limits and revelling in the results.

I will not tell you this is a better car than a Porsche 911 – it’s just too different and too differently-engineered. I’m sure the car magazines will be only too happy to run comparison tests and make their judgements, but as someone who has admired Porsches, but never been a convert, I find the Vantage delivers everything I desire in a compact, high performance coupe. Plus, given my British bias, its combination of styling, materials and handling suit me just fine.

I take my hat off to Chief Designer Marek Reichman, whom I have known as long as he has been at Aston Martin.

He has produced designs which capture the spirit of modern Aston Martin design, established by Henrik Fisker, but he has moved the level onward and upward to achieve a new plane, and details which reveal his innate sophistication as a designer, and his ability to apply these details to a production car. 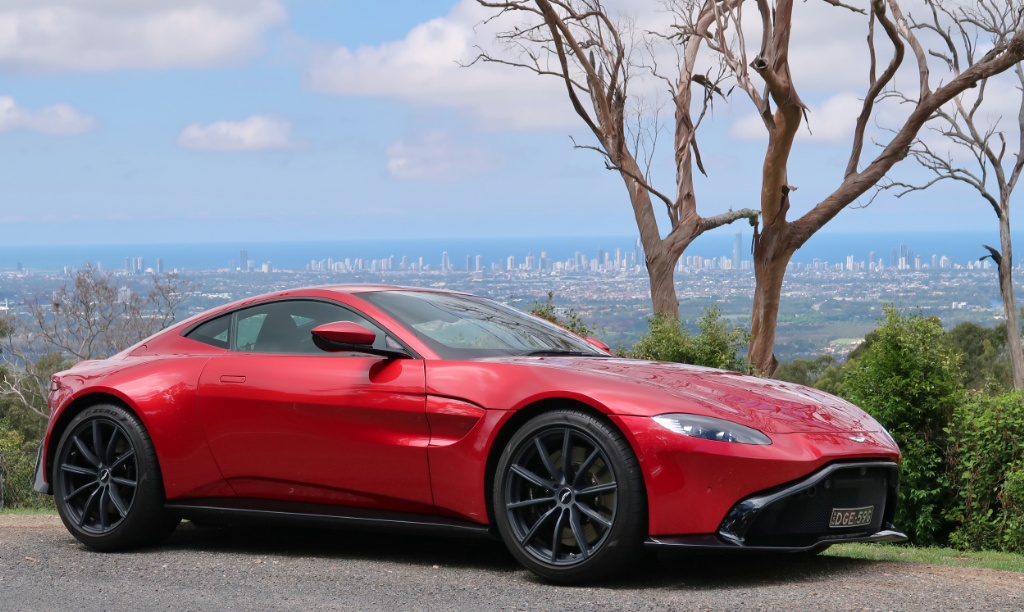 So, to the drive. I’m on my favourite loop (in the middle of nowhere) and this allows me to wind up the AMG V8, and stretch the Vantage’s legs. The Vantage points beautifully, and only when you get into a tight corner at high speed does it ‘step out’, but so controllably.

The precision of the steering is fantastic, and the response from the Aston Martin-fettled, AMG-derived V8 is smooth and linear. This engine was definately the right choice. 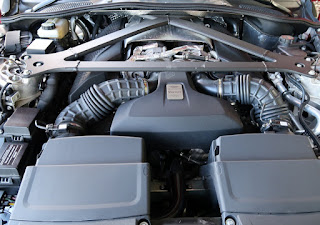 Combined with the ZF 8-speed torque converter automatic with paddles, the driving experience is great, whether dribbling through the burbs, or having the tach needle bash the redline out in the sticks.

I’m sure the Porsche fanboys will tell me the 911 is not only comparable, but better, however I love the concept of the Vantage with its (virtually) mid-mounted V8, and 50-50 weight distribution when the driver is on board. 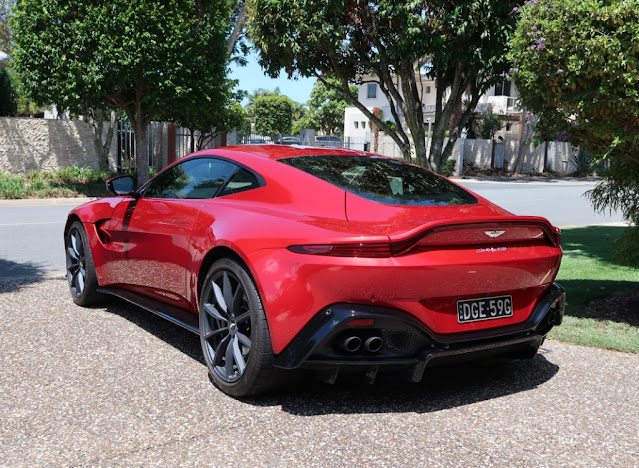 I have written extensively about Aston Martin’s business issues and the question of its survival, but while it keeps turning out cars with the value and personality of the Vantage I believe that Aston Martin could have a future, while ever it can deliver on customers’ expectations and ‘stay in the game’.
This car, as tested, has a sticker price of AUD$372,000 - and let me tell you, it IS value for money!

*My thanks to James Read and Gold Coast Aston Martin for delivering the test car.

Posted by John Crawford at 5:24 PM